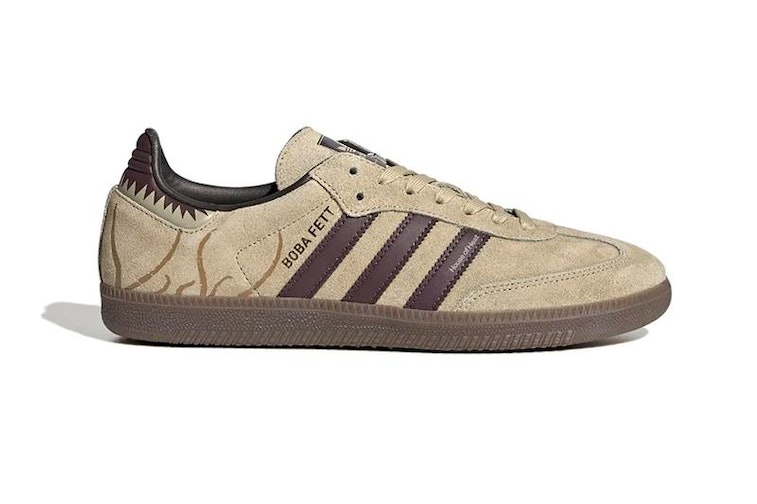 Adidas and Star Wars have collaborated throughout the last decade, offering an array of galaxy-inspired sneakers dedicated to characters like Boba Fett, Yoda, C-3PO, and Stormtroopers. That partnership now continues with a design far, far away from any previous model; a new “Sarlacc Pit” Samba commemorating bounty hunter Boba Fett’s escape in the 1983 movie Star Wars: Episode VI – Return of the Jedi.

In the film, the Sarlacc Pit is a lair that houses, well, sarlaccs; creatures who swallow an individual whole and slowly digest them over one thousand years. While fighting near their pit, Boba Fett finds himself knocked into the mouth of a sarlacc, and eager to avoid an excruciating demise, escapes by wounding the creature with an exploded sail barge.

Straight out of the movies — Adidas’ Sarlacc Pit Samba translates this scene with a tan suede upper, mimicking the sandy dunes of Tatooine. Dark brown accents the Three Stripes and leather heel overlays, perhaps nodding to the color of the Sarlacc Pit. More obvious details, like tentacle graphics and toothy spikes at the heel, make the connection clear but not overwhelming.

The Samba’s typical lateral branding has been replaced with “Boba Fett,” a tribute to his miraculous escape from the sarlacc. Star Wars logos sit on the tongue tags alongside Adidas branding, while a gum outsole finishes off the shoe.

The best Star Wars sneaker yet? — Rather than relying on a silhouette previously used (and tired) within Adidas’ galactic partnership, the latest Star Wars sneaker emulates the movie franchise as a classic anyone can enjoy. Much like Star Wars, the Samba model was incredibly popular throughout the ‘70s and ‘80s, and today has a following of dedicated fans (as well as multiple spin-offs).

As one of the few low-top lifestyle sneakers within Adidas’ Star Wars collection — which previously focused on Top Ten His, Ultra Boosts, and NMD R1s — the Sarlacc Pit Samba stands out... in a good way. Its design doesn’t make us want to “vomit banta milk,” as previous Star Wars sneakers have.

Adidas has yet to announce when its thematic shoes will drop, but a release is expected online within the coming months. Hopefully, getting the limited Star Wars shoes will be an easier task than the one they depict — may the Force be with you.