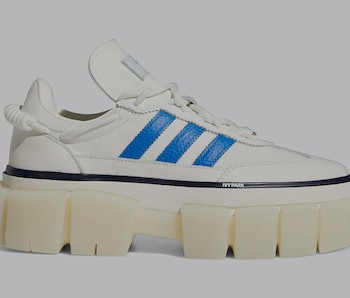 Beyoncé is stepping up her Adidas Ivy Park line with a new sneaker model. After last year’s Super Sleek 72 shoe, the duo has supersized the silhouette to create the Super Super Sleek sneaker — which isn’t as slender as its name implies.

With Queen B, it’s go big or go home. Even her past Ivy Park projects — which include neon swimwear, elbow-length mittens, and jackets with built-in masks — have seen Beyoncé go all out, making sure to include gender and size-inclusive pieces. And when it comes to footwear, the artist is continuing her Ivy Park ethos of empowerment through a massive platform that won’t be ignored.

Supersize me — Similar to the Super Sleek 72 sneaker that came before it, the new style utilizes the classic Adidas Samba model as its base. Arriving in white and beige color palettes, the shoe boasts a leather and twill upper with an extended, oversized tongue. Signature cord lacing gives the sneaker a more utilitarian look, while Ivy Park branding hits a stripe on the midsole. On the beige iteration, Adidas’ Three Stripes nearly blend into the upper, but the white Super Super Sleek sneaker lets the branding shine in bright blue.

What supersizes the model — and justifies the new name — is the shoe’s chunky rubber sole unit. Each pair features a translucent rubber build with an exaggerated, segmented look reminiscent of Dr. Martens or Balenciaga sneakers; in this case, Bey-lenciaga.

The bold Super Super Sleek shoe also comes with a bonus for fans. An Ivy Park key tag, which can be attached to the heel or any part of the sneaker, allows the wearer to proudly display their love for the Adidas sublabel. But with a longer length, consumers might want to use the key tag for its actual function, as opposed to dragging it on the ground and risking a trip.

You’ll be able to Bey soon — Adidas plans to release Ivy Park’s Super Super sleek sneaker on August 20 — mark your calendars or risk missing out. Thanks to the Beyhive, this shoe won’t be around for long, especially not for its retail price of $140.

Get your sneakers straight from the source at Adidas’ website, and good luck: It won’t be easy trying to cop the same kicks as Beyoncé.