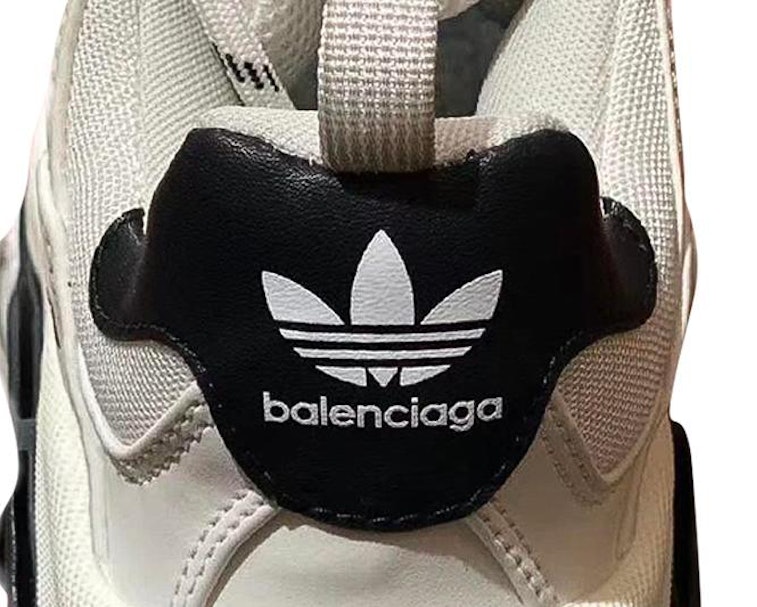 Adidas is acquiring luxury house collaborations at an incredible pace. After tapping Prada in January for co-branded Forum sneakers, the sportswear brand partnered with Gucci in February to debut a more robust line of blazers, tracksuits, knitwear, hats, and bags. Now, as March closes out, Adidas seems to be continuing its streak of high-fashion offerings with Balenciaga as a new partner.

Leak page @apolloluo1976 first hinted at the collaboration, and now official-looking images have surfaced showing off a pair of Balenciaga’s infamous Triple S sneakers with recognizable Adidas branding. Three Stripes decorate the sides of the chunky model, as a Balenciaga logo sits beneath Adidas’ trefoil motif at the heel. The clean, black-and-white design has yet to be officially confirmed by either brand, although a Balenciaga partnership would fit well in Adidas’ wheelhouse given its activities this year alone.

Triple Stripes — After teaming up with Prada and Gucci, the sportswear brand has proven it’s capable of giving sneakers, clothing, and even balaclavas a luxurious revamp. As both Balenciaga and Gucci are owned by Kering, perhaps the two brands’ creative teams exchanged Adidas’ contact information. High-end labels have been leaning hard into street and sportswear in recent years, making an Adidas collaboration an obvious choice for Balenciaga. As was the case with both Prada and Gucci, the striped Triple S sneaker will likely be part of a larger collection including clothing and accessories.

Adidas’ past luxury partnerships focused on its Three Stripes and trefoil motifs in high-low approach comparable to Dapper Dan’s logo-centric tracksuits of the ‘80s and ‘90s. Gucci has infused elegant (and exclusive) styles into Adidas’ colorful sportswear legacy, adding a casual air to clothing that will be priced well over four figures. The brand’s collaboration with Prada similarly channeled laidback luxury and accordingly received early endorsement from A$AP Rocky.

Balenciaga’s Triple S sneakers once boasted a cult following led by Bella Hadid, Pharrell Williams, and Hailey Bieber, although the style peaked around 2018. Adding Adidas branding could allow the luxe kicks to return to hype and expand their appeal even further. Seeing how much Kanye West loves to rep Balenciaga and Adidas — when he’s not pissing off the latter for wearing Nike — the forthcoming Triple S sneakers could soon make an appearance on the rapper’s feet, which will only increase demand among hypebeasts that much higher. An inflated price tag, which should start at $1,000 minimum, will also have some say in who will be able to wear the sneakers whenever (or if) they do release.