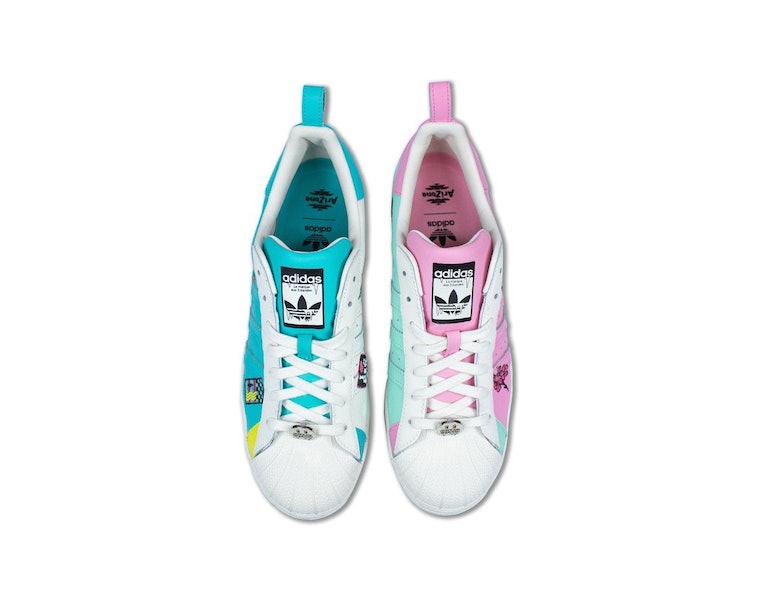 When a Twisted Tea briefly united the internet, Arizona Iced Tea tried its best to ride on the newly found respect for iced tea drinkers. Pairing up with Adidas, the tea brand announced two pairs of Arizona-themed Superstars. Although they can’t serve justice quite like the Twisted Tea, the shoes could certainly be thrown Bush-style. Upon seeing their design, however, you may just want to throw them out.

This collaboration marks Arizona’s second partnership with Adidas, and hopefully a more successful one. In 2019, the two brands released Arizona Yung 1 and Continental sneakers, to be released exclusively at an NYC pop-up. An ode to the beloved tea, the shoes were marketed for 99 cents and boasted a nauseatingly floral design. But despite their ugliness, the sneakers’ low price attracted crowds of sneakerheads, with a line forming outside the pop-up before it opened. After two teenagers were assaulted in line, however, the pop-up was closed, with Arizona promising to release its sneakers to the public.

Where’s the flavor? — While the brand has stayed true to its word, it failed to recognize that the demand for Arizona sneakers might be from their 99-cent pricing, rather than design. Nevertheless, Arizona’s new Superstars are slightly less offensive than the original styling of the Yung 1 and Continental sneakers.

The first Superstar in the Arizona pack shares a multitude of colors with the can, with bright teal and pink uppers. Each lateral and medial side features debossed detailing along with questionable embroidered graphics, including a thunderbird, “I Heart Big Cans” patch, and a melting Adidas logo. Luckily, this odd design is also available in full teal and cream colorways.

Of course, Arizona and Adidas’ partnership isn’t complete without a teal colorway decorated with pink flowers. Made for the most dedicated of fans, the Superstar mimics the Arizona can design to a tea, accenting its cherry blossom details with gold aglets and a deubré that features a smiley face motif with frozen teeth.

It’s much easier to enjoy an actual Arizona Iced Tea as opposed to these designs, but it’s not all bad in the end. The outsole — the least seen piece of a shoe — has been labeled with Arizona’s logo on one foot, while the other reads “Have an Iced Day!” Further branding comes in an extra set of laces, housed in a casing inspired by Arizona’s Cherry Blossom Green Tea packaging.

It’s tea time — Whether you’re Arizona’s biggest fan or just colorblind, you can expect these shoes to have lower demand than the brand’s first drop with Adidas. There’ll be no line IRL, with the pack dropping February 4 on the Adidas website, and instead of 99 cents, the Superstars will run for $100 each, costing you approximately 101 Arizona Iced Teas. Unfortunately, the sneakers don’t come with the same taste.