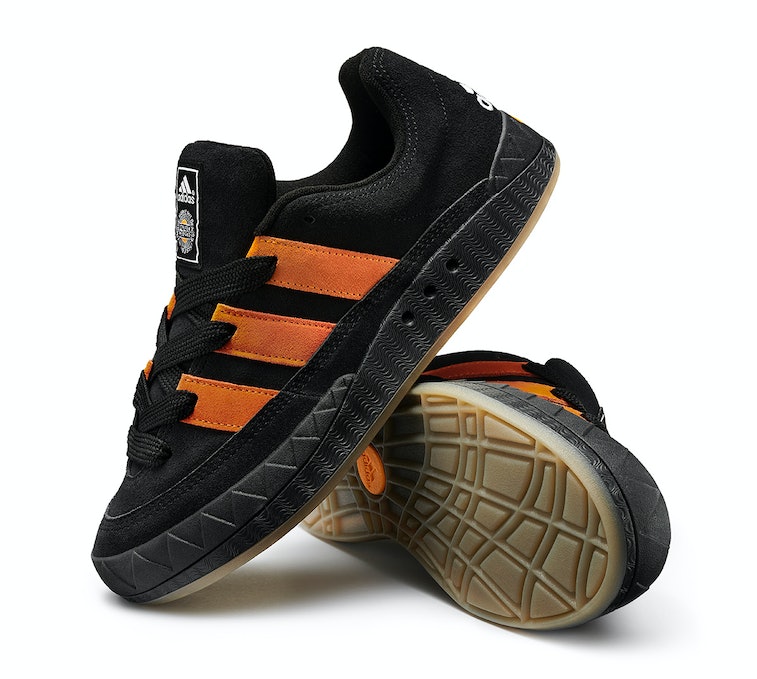 Adidas Skateboarding has tapped pro skater Jamal Smith to reimagine its classic Adimatic sneaker. Co-designed by Smith, the ‘90s silhouette takes inspiration from hip-hop production, sample loops, and the skater’s own affinity for doing tricks involving 360º spins. A beefed-up sole and chunky Three Stripes add to the laid-back, retro feel of the shoe.

The Adimatic sneaker originally came to life through ‘90s skate culture, a time when the “Golden Era” of hip-hop and its accompanying colorful, oversized apparel influenced the skate scene. East Coast skate hubs like Flushing Meadows, Brooklyn Banks, and Philly’s Love Park — where Smith mastered his moves — were at the forefront of new skating styles and inspired the initial Adimatic design. Per a press release, the rider wants his Adidas partnership to pay homage to the heritage of Philly skateboarding, with a goal of uplifting the current community. Smith hopes to “pull inspiration from the past to create the future,” the statement continues.

A new classic — Like other skate sneakers of the time, the Adimatic was built to last and accordingly boasts a chunky, layered look. Beneath a black upper sits a stacked midsole and gum outsole, adding grip and protection against abrasion. Per Smith’s request, the midsole features distinctive zig-zag patterns for more durability.

Up top, black suede gives the sneaker a rugged look, contrasting with the oversized and orange Three Stripes. An OrthoLite sockliner — a new addition to the Adimatic — provides impact protection as skaters flex their feet while performing tricks.

“The Adimatic launch makes me feel a mixture of emotions — I’m extremely appreciative and dumbfounded,” Smith said in a statement. “It means the world to me, for real. I already had the colorway and idea in my head for years. Definitely going to be skating this model for a minute and I hope the rest of the world enjoys it, too.”

You can cop soon — Smith’s revamp of the Adimatic will be up for grabs on May 14 via Adidas Skateboarding’s website. Specialty skate shops will also carry the sneaker, which retails for $100. Whether you’re looking for a new skate shoe or simply a stylish yet comfortable sneaker, Smith’s Adimatic is a great choice — and one that shouldn’t be clouded by hype and resellers. Make sure to check out the chunky kicks once they release.