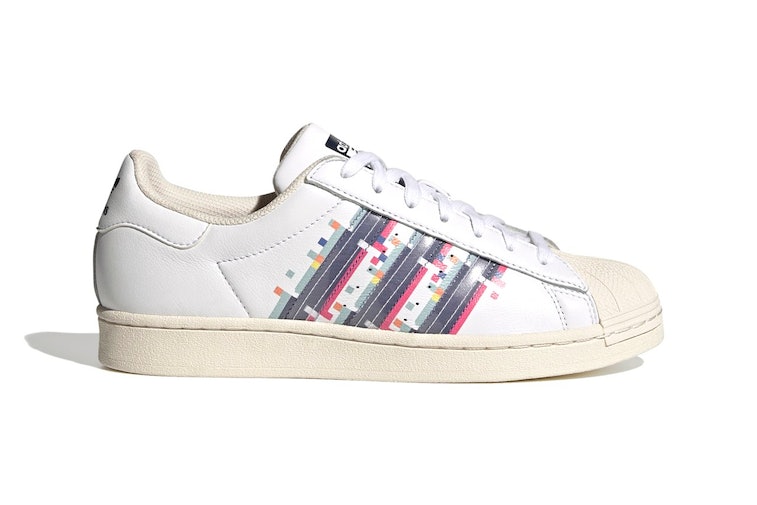 Adidas is joining the wave of sneakers for gamers by dropping a four-pack bearing 8-bit graphics. The lineup, which is out Thursday, consists of the Superstar, Ozweego, ZX 2K Boost, and NMD R1.

Much to my relief, Adidas makes no mention of performance for its "Gaming Pack." But now I'm starting to wonder if 8-bit graphics are becoming too much of a cliche for the intersection of video games and sneakers. Nike went a similar route with a few of the five sneakers it released for the League of Legends World Championship, but still had more to offer with a smooth gradient and "Have a Good Game" motifs. Certainly, there's more to pull from gaming than 8-bit graphics — and I wish we'd seen Adidas get a little more creative.

Another issue, which isn't limited to Adidas, is the shutting out of female gamers in the growing trend. Streetwear, fashion, and sneakers all beginning to embrace video games is a sign of how the perception of gaming is changing, and yet it hasn't acknowledged how many girls and women are also passionate about the segment.

Running through the lineup — Complaints aside, the best of the four sneakers is the Superstar with its signature stripes rendered in colorful 8-bit. The rest of the classic sneaker is left alone, pairing a white leather upper with a cream shell toe and midsole.

Coming in right behind it is the Ozweego, which is an underrated silhouette. The 8-bit treatment here reads less overtly related to gaming, and if anything it looks like a time lapse of stars on the toe tip and heel counter. Aqua cord provides a nice bit of contrast from the deep blue upper, and I see this Ozweego as just a good looking shoe that, I guess, you can argue is inspired by gaming.

The same 8-bit blur also appears on the ZX 2K Boost and NMD R1, although with weaker appeal. The former, which comes in white and blue, is at best fine — but I cannot stress enough how much the NMD series sucks all around. It's become Adidas' go-to punchline, its own version of Nike's Roshe Run, saved only by a hiking makeover that's yet to make its way to the States.

Press play Thursday — All four sneakers will release through Adidas' site at 10 a.m. EST Thursday, with prices starting at $90 for the Superstar and topping out at $150 for the ZX 2K Boost. It's possible some of the sneakers eventually sell out, but you should be able to cop with relative ease and little urgency.