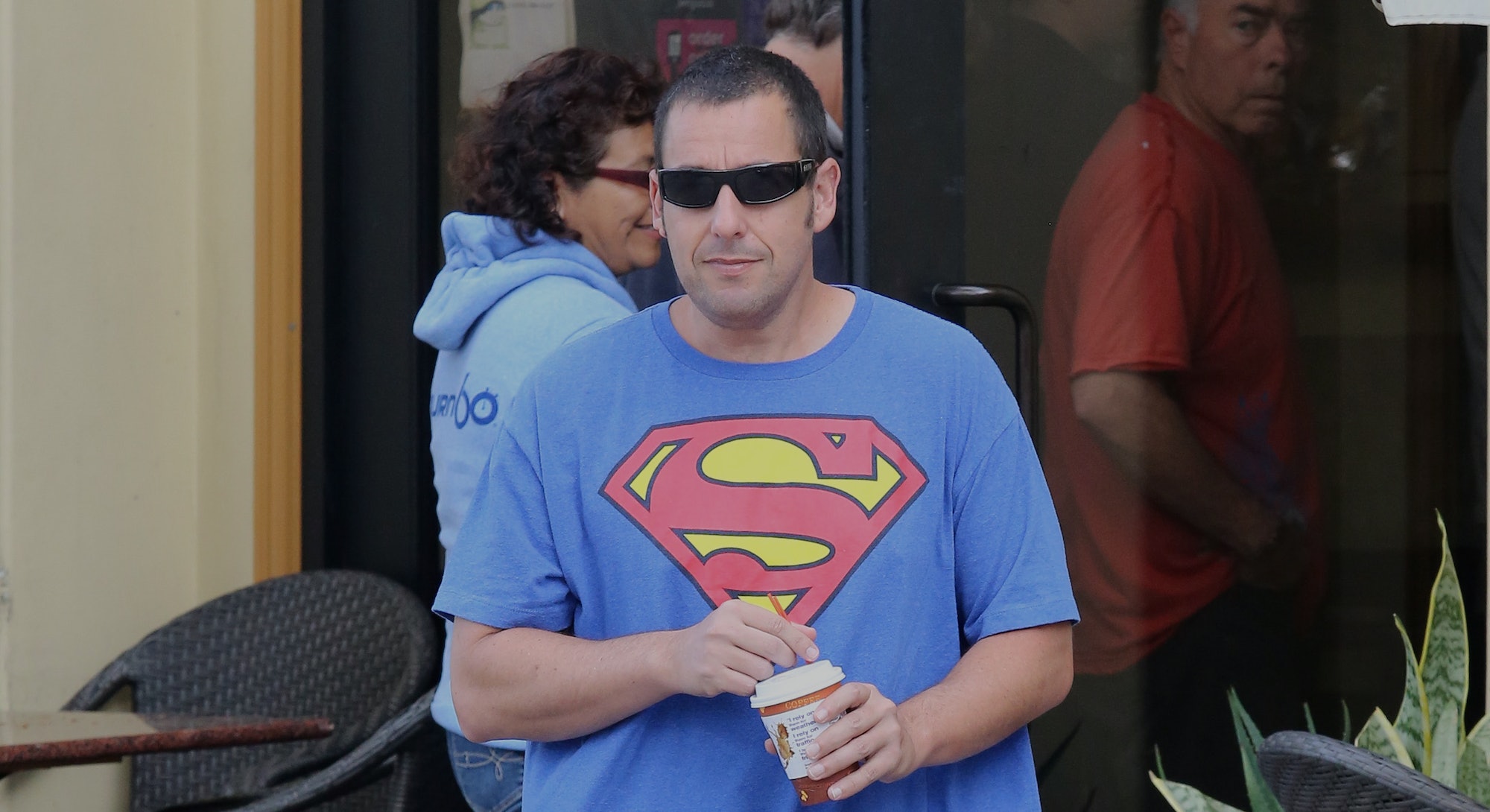 For someone in the same tax bracket as Jeff Bezos, Adam Sandler dresses like the richest middle-schooler you’ll ever see.

Rarely deviating from his uniform of a baggy graphic tee, even baggier basketball shorts, and a pair of colorful sneakers, Sandler always looks ready for an afterschool game of pickup basketball. Seriously, always — he’s worn sweatsuits to multiple awards shows, and was interviewed in track pants on Jimmy Fallon’s The Tonight Show. Even before the pandemic forced us to stay home and break out our now-daily sweats, Sandler was ahead of the times — he’s been prioritizing comfort over presentation since the early '90s.

The actor has a long history of unforgivable fashion looks — his entire wardrobe could be replicated via the Kohl’s sale rack — but Sandler’s steady flow of relaxed fits is what makes him a style icon. Sandler, 54, has been acting since he was in his early 20s, kicking off his career on MTV and Saturday Night Live. Unlike other stars, though, he didn’t allow fame to change his style, even when it derived from movies like Happy Gilmore and Grown Ups. Now, his style is as recognizable as his movie roles.

Other actors in Sandler’s age range might be considered better-dressed than him — George Clooney, Brad Pitt, and Tom Cruise have all been praised in the pages of GQ. But while their sharp-suited looks lead the crowd, none stand out from it in the way Sandler does. His consistent relaxed looks are foolproof, surviving decades of changing trends and styles. Pete Davidson even cited the actor as his fashion icon last December in an interview with Popsugar, applauding Sandler’s “signature” mode of dressing. But what makes baggy pants and a big shirt so admirable, other than who’s wearing them?

Although it may be evident from his roles in Hotel Transylvania and Hubie Halloween, Adam Sandler doesn’t care what other people think of him. He breaks every fashion rule, from ill-fitting silhouettes to the dreaded outfit repeat. He’s even worn slippers to his own premieres on numerous occasions. Buried between these faux pas, however, is a valuable lesson becoming increasingly important in today’s fashion: DGAF. And if you don’t know what that means, well, Urban Dictionary is your friend.

Don’t give up, just give in

As the pandemic rages on and our country’s government collapses, Americans are becoming more unhinged and less concerned about looking society-appropriate. It’s the perfect time for the rise of Sandler Fashion, which is suited for any occasion. Have a work Zoom? Throw on one of Sandler’s favorite formal tops, a loose polo tee. Going on a quarantine walk? Good thing you’re comfortable in sneakers and track pants. Need to go grocery shopping? Your appearance will clearly tell neighbors you’re not to be bothered. And again, you could easily pick up a game of basketball at any moment.

Adopting Sandler’s style is a direct rejection of America’s toxic “hustle culture,” the idea that every nanosecond of our lives must be commodified and pointed toward profit and self-improvement. We’re living through distressing, life-changing events daily at this point, and we doubt your boss cares what you’re wearing behind (and beneath) your laptop camera. It’s time to take on a new way of thinking, Sandler-style.In an unhinged world, untailored is the way to go.

It’s somewhat baffling to think that an actor reportedly worth $420 million has remained so faithful to his basic wardrobe — especially in the age of the influencer. Trends come and go within weeks, updated with every Kardashian-Jenner Instagram post. Like modern Midases, celebrities turn everything they touch into consumer gold. Fast fashion has created a cycle of endless consumption — it’s newness for the sake of newness, or buying for the sake of buying. Even with the pandemic at large, brands are asking us to upgrade our loungewear and perfect our work-from-home looks. In a world obsessed with overindulgence, Sandler’s commitment to his comfortable uniform is an admirable and sustainable move.

Unlike the supermodels flaunting the latest designer pieces, Sandler’s style has a genuine feeling to it. As far as we know, he isn’t being paid to rep the latest fashion, and his loyalty to comfort is an unbreakable bond. Despite his absence on social media, Sandler remains a legend — his fits in Uncut Gems sent Twitter into overdrive. He's a throwback to a time when actors were actors, not celebrities.

Twitter user Deanna told Input Sandler’s fashion is “accessible” and “for the people,” letting it transcend time and generations. Unlike Kendall Jenner, Bella Hadid, Timothée Chalamet, and basically every other celebrity turned style influencer, most of Sandler’s pieces are affordable and can be easily replicated. The actor also sports more of a “real” streetstyle look compared to models, Deanna said. And since he’s not worried about keeping his outfit minimal or frankly, what he looks like, Sandler always looks expertly disheveled. His loose pants, huge shirt, and sneakers give him a youthful glow — the kind that implies zero coordination, but zero fucks.

Nowadays, pre-distressed grunge is an affectation often practiced by rich celebrities, but the style originally came to life in the late '80s and '90s, around the time Sandler came to fame. Angsty graphic tees, loose silhouettes, and bulky platform shoes were the epitome of fashion, until the early 2000s made funky tracksuits and sneakers mainstream. As we see the resurgence of both eras, Sandler’s style lands at their intersection, making him a trendsetter without trying to be one — the best kind. In fact, his affection for baggy graphic tees, colorful sneakers, and huge pants are all terrifically in fashion.

With the modestly calibrated oddness of his looks, Adam Sandler challenges our perceptions of what counts as a good outfit. His style simultaneously toes the lines of aspirational and relatable. Whether you’re on board with the basketball shorts or not, it’s time to adopt Sandler’s individualistic approach to self-presentation. The man wears what he wants, and his dedication to comfort is practically religious.

Sandler isn’t on the same plane as Kanye or Jonah Hill, fashion-wise. He’s not even on the same planet. But let’s not compare apples and oranges. Respect and appreciate not just the fit, but the approach: Sandler looks like he’s wearing exactly what he wants, the way he wants to wear it, with no regard for his image or a management team. He brings down to earth the rather simple business of wearing what makes you feel good.

Society says that to be cool is to never try too hard, and Sandler doesn’t really try at all. That’s as cool as it gets.