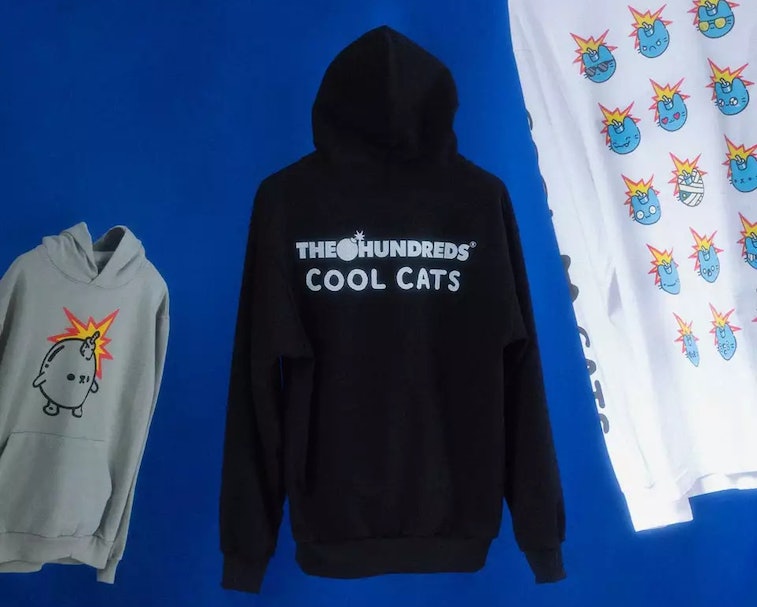 The Hundreds’s Adam Bomb Squad and Cool Cats are lighting the fuse on an apparel collection to celebrate their joint NFT project. Presented as T-shirts, hoodies, and tote bags, the clothing is the brands’ way of helping fans find community among each other.

The hoodies, available in sage or black, feature a reinvented Adam Bomb on the front and both of the brands’ logos on the back. T-shirts arrive in a similar makeup, and the long-sleeve shirts portray the Cool Cat mascot in all of its moods. The tote bag finishes off the collection with a light blue Bomb Kitty and co-branded logos. Those who hold one of the brand’s respective NFTs can connect their crypto wallet to receive a discount on the pieces.

Meet the squad — The OG streetwear brand’s Adam Bomb Squad hit the web3 ground running when it launched in 2021. Since then, the digital imprint has already added a range of collabs to its web3 roster, including partnerships with the Bored Ape Yacht Club and CryptoPunks. Many view Bobby Hundreds as a trustworthy leader on- and offline, a challenge for companies that are much newer to the scene.

Although the Cool Cats launched the same year, it’s struggled to maintain the initial excitement and support of its fanbase. Its $MILK token’s long-term value disappointed its 9,999 NFT holders, and CEO Chris Hassett jumped ship four months after he started in January 2022. Still, the Cool Cats have sunk their claws into the metaverse, and the Adam Bomb Squad’s upcoming trip to Cooltopia could give the kitties a fresh fanbase.

Going cold — The partnership also comes as the “crypto winter” continues to edge on. Coins are losing value, scams are revealed with more frequency, and companies are scrambling to keep up. By linking Adam Bomb Squad and Cool Cats, the partnership provides a bridge for both fanbases, based on community, learning, and positivity.

“Both ABS and the Cool Cats community are about having fun and connecting people together, whether online or IRL,” The Hundreds says on its website. “We need a lot more love in this crazy world and during dark times like the pandemic, NFT projects like these two helped in bringing a lot of people together, and we love that.”

You can shop the official collection and learn more about the NFT inspirations on The Hundreds’s website and the official app. Prices range from $42 to $130 before a discount for NFT holders.