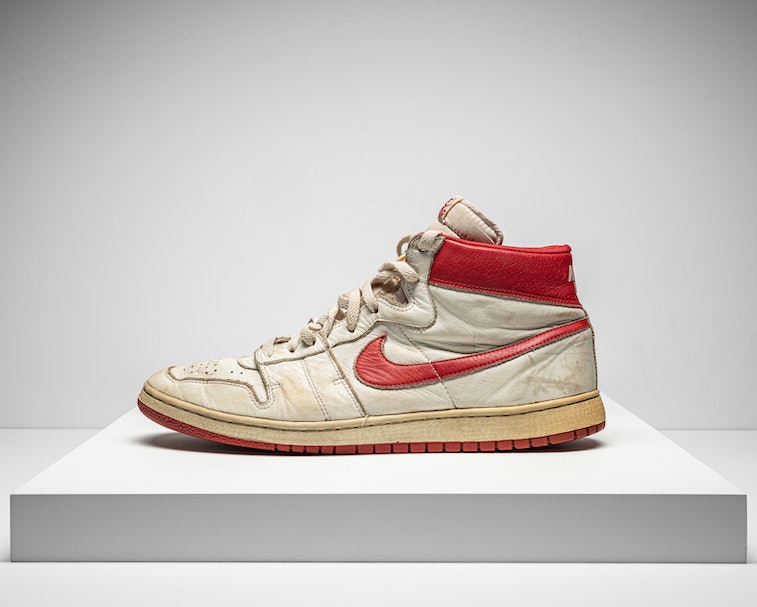 Stadium Goods and Christie's are teaming up for what they're calling the greatest collection of historic Jordans ever sold. 11 lots of game-worn and player-exclusive sneakers from Michael Jordan's career will go up for auction July 30.

The full lineup won't be unveiled until July 23, but the preview alone teases some incredibly rare sneakers worn by His Airness himself. A portion of the proceeds from one of the more valuable lots will go to the NAACP Legal Defense Fund.

The Pre-Jordans — Among the three sneakers announced today, the most valuable is the Nike Air Ship that Jordan wore before he got his own sneaker. The NBA banning the Air Jordan 1 is actually actually a myth; it was the Air Ship, which was quite similar, that drew the league's ire for its non-conforming black-and-red color treatment. Up for grabs is the white and red version, and although it doesn't have quite the same lore, it's expected to fetch between $350,000 and $550,000.

Some 7s and 14s, too — Also confirmed are a game-worn and player exclusive pair of Air Jordan 7s, as well as player-exclusive Air Jordan 14s that Jordan wore in practice. The 7s were made just for Jordan to wear on the Dream Team at the 1992 Summer Olympics. They've been photo-matched to the Gold Medal game against Croatia and are grouped with a Magic Johnson Olympic T-shirt. Both were gifted to a receptionist at the hotel where the Dream Team stayed. They're expected to sell for $50,000 to $70,000.

The Air Jordan 14s are something of a bargain, with a predicted sale of $6,000 to $8,000. The "Chicago" version was made just for Jordan, and you could see him wearing them in practice in The Last Dance between games during the 1998 NBA Finals. While 14s aren't among the most popular Air Jordans, they were the last pair Jordan wore while winning a championship — an important distinction among collectors.

Go see them in person — While purchasing any of these rare Jordans is but a mere fantasy for most of us, Stadium Goods and Christie's will hold a public exhibition from July 23 to August 13 at the Christie's New York gallery. Viewing is by appointment only, which you can set up here in addition to viewing the sneakers and placing a bid (lol).