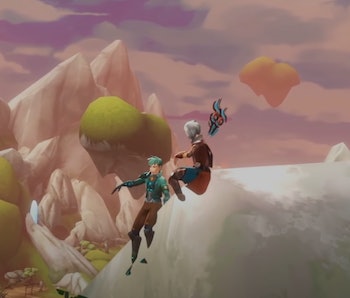 I never got into World of Warcraft when my friends did (I was more of a Runescape guy), but I could definitely see the appeal. Messing around in an expansive open world with a bunch of strangers, roleplaying as a troll, and collecting loot is a formative experience.

I’m recapturing some of that magic now with Zenith: The Last City, a WoW designed with VR in mind, that hasn’t knocked my socks off but is making some really interesting choices in how it wants players to move around its world.

Checklists — Slipping on the Quest 2 (the game is also on Steam VR and Playstation VR), Zenith starts as most roleplaying games do. After wading through some loading screens, the game walks you through a basic character creator and lets you choose a class and emphasis, either a spell-slinging “Essence Mage” or sword-swinging “Blade Master,” with focuses in either DPS, support, or tanking.

An MMORPG set in a science fiction fantasy world with unique (and goofy) traversal mechanics that are only possible in VR.

My first discovery in Zenith was that the quests and story very much aren’t the draw for this game. No offense to anyone who’s into an anime-inspired mix of fantasy and sci-fi with underground cities and horned demons, it’s just not doing a whole lot for me. Maybe that changes 20 fetch quests deep, but in the early going Zenith seems like it’s really about what all MMOs are about — the satisfying pleasure of checking things off a list.

Combat is how you’ll spend most of your time doing that. You can blast lasers or swing swords with the side buttons of your VR controller of choice, use gestures to trigger special attacks, and use the triggers and a light toss to lob grenades. It’s not as visceral or immersive as you might hope, mainly because Zenith’s enemies aren’t animated to be particularly reactive. But that doesn’t take away from the fact that shooting lasers out of my hands is… well, it’s rad.

Climb and glide — Zenith differentiates itself early by having surprisingly freewheeling methods for getting around the world. There’s a jump button and in some cases a dash, but the good stuff comes from climbing.

Like Breath of the Wild before it, Zenith lets you climb just about anything. Climbing is as simple as grabbing with your VR controller and then dragging down, alternating between hands as you shimmy up just about any tall object. This is great for getting a better view of Zenith's simplistic, but pleasant vistas, getting the jump on enemies, or jumping off.

There is fall damage, trust me, I learned this the hard way. But as I overheard from another player mumbling aloud as they looked through their inventory, if you jump and then spread out your arms like an airplane, you glide.

It’s a slow drop — more “falling with style” than Superman — but it makes getting around Zenith easy and pretty funny to watch when you consider what you’re doing outside of your headset. Quickly my time with the game became about climbing the highest possible thing and then gliding down. Scurrying like a house cat up a rock, pressing the jump button, and then jabbing my arms and VR controllers out like my HP depends on it, because it did. It never got old.

Hot mic — How did I overhear someone explaining gliding before I looked it up myself or it was tutorialized by Zenith’s robot companion? Because the game defaults to a live, proximity-based mic system. Meaning because I was standing next to a crafting station I could hear my fellow spellcaster reading the games manual to themself.

Surprisingly? It’s not awful. On Zenith servers with fewer players, talking is mostly limited to a wave and a few hellos. I fought rats with a heavily breathing kid who added his own sound effects and liked to shout a friendly “Hi Mika!” every time we talked to the same quest giver. That was the extent of it.

“I fought rats with a heavily breathing kid who added his own sound effects...”

On servers with more players, these moments can spin out into longer social experiences. I commiserated with a Blade Master over the surprisingly complex introduction to crafting the game leads you through. Another player kindly reminded me how the game's gesture system worked. Almost everyone I ran into either kept to themselves or was surprisingly friendly.

Zenith’s mic system isn’t unique, Meta’s own Horizon Worlds works more or less the same way and it's pretty easy to mute other players if they bother you. But I was pleased the game’s culture hasn’t curdled yet. It’s still a chill place to hang out.

And having a chill place to hang is the VR endgame in my opinion. In the absence of a cohesive mega-platform, or a truly interconnected internet-equivalent for VR (it’s not happening with HTC or Meta) smaller virtual worlds are the best alternative. Zenith is just one particularly janky example, but if it takes off, it just might be the first of many.