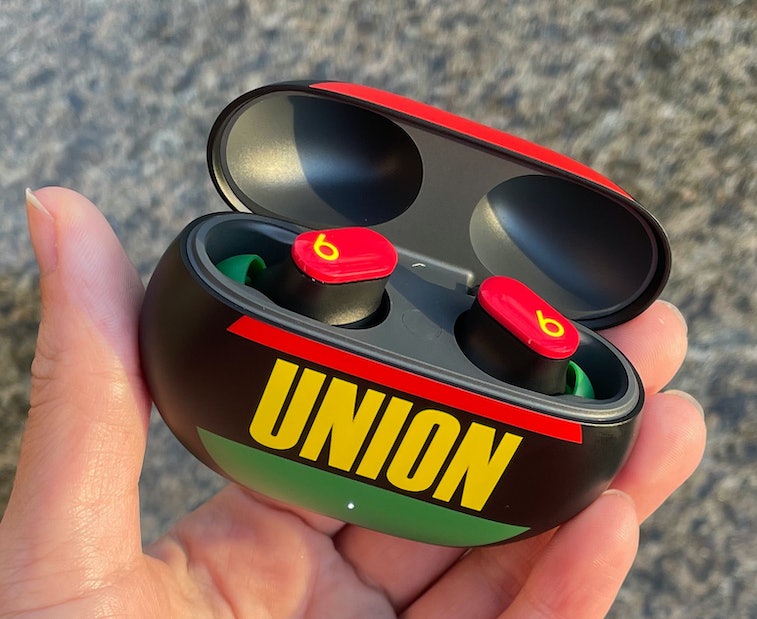 Beats wireless earbuds are now streetwear accessories, thanks to a makeover from Union.

In celebration of its 30th anniversary, the boutique and brand teamed up with Beats to create a limited edition set of Beats Studio Buds. Featuring a bold red, yellow, black, and green design, the wireless earbuds draw inspiration from the Pan-African flag to pay tribute to Union’s roots as a Black-owned business.

The crossover between the two brands marks the first collaboration involving the Studio Buds since their launch in June. Featuring active noise cancellation (ANC) and Transparency mode, the wireless earbuds are able to isolate exterior sound and fit comfortably in people’s ears, delivering a high-quality audio experience. And with the special makeover, the earbuds are now more colorful than ever.

These Studio Buds feature a bold red, black, and green design and packaging, drawing inspiration from the Pan-African flag and paying tribute to Union’s roots as a Black-owned business.

When Union announced a slew of collaborations in honor of its 30th anniversary, 19 brands were on the list, alongside “surprise” labels that would be revealed later on. Beats must have fallen into the latter category, especially seeing as it doesn’t necessarily fit within the streetwear category — at least, not until Union gave its Studio Buds a new look.

With the vibrant colors of the Pan-African flag, the earbuds are livelier than any of their counterparts. As of now, the Studio Buds come in red, black, and white shades, which rival the all-white AirPods but not Union’s design. At the front of the earbuds’ case, red and green sandwich Union’s logo, written out in yellow. On the back, the boutique’s signature frontman logo pays homage to Union’s legacy.

Each color translates to the Studio Buds, too. Red decorates the shiny outer handle as the body of the earbud remains black. Like the case’s Union logo, Beats’ “b” motif comes dressed in yellow, and while the inner part of the earbuds can’t be seen when worn, their green ear tips are festive enough to enjoy when in the case or out of your ear.

To complete the look – and further the notion that earbuds can be a hot accessory — Union and Beats crafted a colorful carrying case for the Studio Buds. Taking on the same black, yellow, green, and red hues as the case and earbuds, the knotted pouch can be tied or clipped to any outfit or bag. And if you’re not one to precariously dangle your Beats in front of others, the thick carrying case makes great protection against anything inside your bag and can be secured closed.

In the weird promo video for their collaboration, Union founder Chris Gibbs introduces Vince Staples, a “longtime friend of the store,” to the Union Beats, as co-founder Beth Gibbs discusses with her husband how his obsession with the earbuds is concerning. Wearing the Beats Studio Buds, I can see why Gibbs would be obsessed — they fit comfortably within my ears and have clear sound, canceling most noise around me.

Thanks to the earbuds’ ANC, I found myself more focused on tasks and able to hear songs in a completely different way. Still, I was grateful for their Transparency mode, which allowed me to be more aware of my surroundings. I love listening to music whenever I can — but as a woman, that’s not always the safest option. Pressing the Beats logo on either earbud, I could seamlessly switch between full immersive sound and a lighter, more transparent version with sounds from around me filtering in.

For the past few years, I’ve remained loyal to my second-generation AirPods — I didn’t see a need to upgrade as the headphones worked as intended. After moving on to something arguably better, however, I began to notice all the faults within my AirPods: they constantly had to be readjusted to fit my ears since they lack ear tips, and their long stem would get caught in my earrings or mask loops. Stem-less and with multiple ear tips for the right fit, the Studio Buds fit better in my ear and allowed me to wear and do what I wanted without having to think about them.

Prior to experiencing such bliss, however, I was put off by the Studio Buds’ ear tips. Owning a few wired headphones with the rubber tips (back in the day) was enough for me; I never liked the feeling of having headphones shoved up my ears. Yet to my surprise, the Studio Buds practically nestled in my ear with no discomfort or need for readjustment. In tandem with ANC, they also offered a superior listening experience. With my AirPods, I had to play a song at top volume to fully experience it; the Beats Studio Buds let me do so at nearly any volume level.

There’s a notable size (and sound) difference between the 2nd generation AirPods and the Beats Studio Buds.Maya Ernest / Input
The Buds come with everything you need to fully enjoy your music. Maya Ernest / Input

With convenient one-touch pairing for both iOS and Android users — a first for the Studio Buds — the Beats connected to my phone instantly, allowing me to ditch my AirPods even faster. Twenty-four hours of battery life, extended by a charging case, offered plenty of time to listen to music. There’s no wireless charging, but that wasn’t a dealbreaker for me since I don’t use wireless charging for anything.

One of the other reasons I refrained from updating my AirPods was because of the cost. At $249, the AirPods Pro are nearly double the cost of my older, $129 pair. Yet the Beats Studio Pro earbuds — which boast the same ANC, Transparency, one-touch pairing, ear tip, and water-resistant features as the AirPods Pro — cost $150, and are actually smaller than any AirPod model. Although I haven’t tried the AirPods Pro, the Beats Studio Buds seem like way more bang for your buck — and other Beats earbuds have already been rated higher than their Apple counterparts.

While streetwear collaborations are known to inflate the prices of original products, the Union x Beats Studio Buds retain the earbuds’ $150 price tag. They’re available at Union’s Los Angeles and Tokyo stores, as well as their respective websites, for a limited time. If you’re looking for the perfect gift (to yourself or others), consider these colorful Studio Buds. You can’t go wrong with their great price and equally great design.