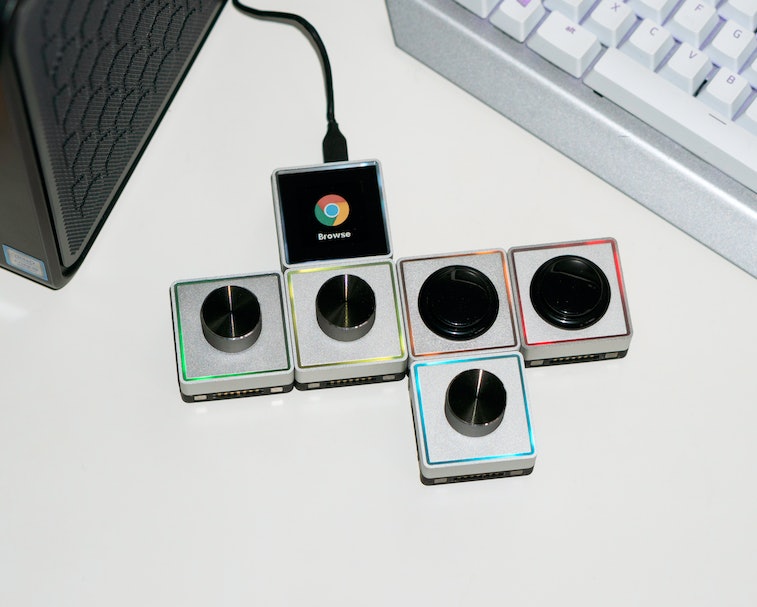 I wouldn’t say I suck at Photoshop, but I wouldn’t call myself a master at chopping pixels either. Despite using Adobe’s software almost daily for 20 years, I still find myself forgetting how to do more complicated stuff. Listen man, I only have enough brain to remember so many keyboard shortcuts for so many apps.

Which is why I’m grateful Palette exists. Palette is a series of modular blocks that can be used as physical keyboard shortcuts. They're basically macros, but cooler because there's more variety than a press. You can mix and match them by clicking them together magnetically for whatever kind of setup you need. Since using Palette a few years ago, Photoshop has never been the same again.

Instead of using a mouse to adjust settings like opacity or brush size, I just twist a knob. I can create a new layer with a single button press. There are tons of settings you can map to the modules for Photoshop.

My system is relatively basic: a core module (that's the one with the screen), two push buttons, and three dials. Even so, there’s something fantastically mechanical and tactile about pushing an arcade-style button to trigger an action or rotating a knob to get a more precise adjustment. It's button delight. Tactile heaven. Every time I press and turn these controls, I feel like I'm doing something way more technical. Like a DJ or an airplane pilot. There's a certain je ne sais quoi to using Palette for making Photoshop tweaks.

Palette is also good for more than just Photoshop. It supports shortcuts for the other apps in Adobe’s Creative Cloud suite, like Lightroom, Illustrator, After Effects, Audition, and InDesign.

The controller blocks also work with some non-Adobe apps, too. Google Chrome, Spotify, and VLC Player are a couple I’ve created custom profiles for. In Chrome, I’ve got push buttons mapped to commands like refresh (Control+R), reload all tabs (mapped to the extension keyboard shortcut) and a knob set to scroll a page vertically. The modules can be programmed for system functions as well so you can control the volume or media with a turn.

A few weeks ago I got frustrated at how complicated it was to take a screenshot on Windows 10 compared to macOS. Turns out a Win+Shift+S is the keyboard combo I needed (but never knew about.) Annoyed with need to press three buttons on my keyboard, I finally mapped the command to a single button. Taking screenshots has never been so satisfying.

Since the whole thing is modular, you can rearrange it however you want whenever you want and keep adding to the system later. Go ahead and build your dream MIDI controller board.

Palette is by no means perfect. Sometimes the modules inexplicably disconnect (you’ll know if a block's customizable RGB lighting is off) and there’s no resistance to the dials or sliders, which means there’s no start or stop state. But if you can work around these shortcomings, Palette is quite useful.

Now for the important part. Although I enjoy my Palette, it’s unfortunately no longer available. The company rebranded as Monogram earlier this year and is releasing a new version called the Creative Console. It’s still a modular system and it’ll connect with existing Palette blocks, but the new modules are thinner and more precise. For example, the orbiter disc module is pressure sensitive.

The Creative Console comes in several kits, each with varying modules and pricing. They’re a little on the pricey side, but if you’re a creative professional (or someone like me who just loves programmable computer modules), these are pretty sweet.

And just to cover my bases, there are other programmable consoles like the LoupeDeck. I’ve only tried Palette and can’t speak on whether the Creative Console or LoupeDeck are better, but I’m dying to try.