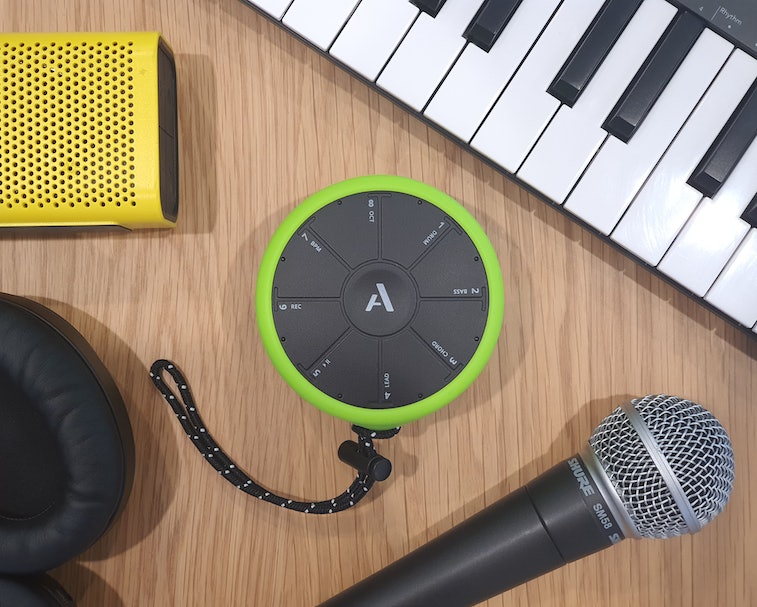 In the same way that digital cameras democratized photography, laptops and desktops getting more powerful and cheaper, internet ubiquity, free-to-download software, and the rise of MIDI, have made making music no longer the exclusive purview of a select few (usually men, often bearded) with access to high-end studios. Moreover, making music is no longer a stationary pursuit. You can do it on a train or a plane. In a cab or on a bus. At the beach or in a park. And one of the finest ways to dip your toes if you're musically curious is with music hardware maker Artiphon's $99 Orba.

Plenty to play with — The mechanics of the Orba are deceptively simple. On the top surface, there's Artiphon's "A" logo on a capacitive button in the center. Around it are eight pie-slice like buttons, each numbered and each with a sliver of text. Buttons 1 through 4 cover the four basic music-making modes (Drum, Bass, Chord, and Lead). Buttons 5 through 8 are for playback, recording, adjusting tempo, and shifting octaves, respectively.

To get started, you simply turn the Orba on by long-pressing the blue power button on the side. Next to it there's a volume rocker in the same shade of royal blue, and two ports; a USB-C and a headphone jack. But you don't need those to start with. The Orba has a built-in speaker, so you can use it without headphones or external speakers (though sound quality, especially for bass sounds is richer when it's plugged in).

Power it up and a blue LED will shine on the 1 / Drum pie slice. You're now in drum mode with each of the eight buttons representing a different drum sound, like a kick, snare, high-hat, etc. Tap them to play, or tap the side of the Orba for a clap sound. Hold the 8 / Octave button while shaking the Orba and you get a shaker sound.

Orba is a handheld synth, looper, and MIDI controller with an integrated looper that lets you layer Drum, Bass, Chord, and Lead parts to create beats and songs on the fly.

Hugely expressive — Switch to Bass, Chord, or Lead and Orba's other gesture-based abilities are unlocked. For instance, in each of those three, sliding your finger on a button toward the A button in the center will reduce the volume of the note or chord being played, while it'll boost it if you move to the edge. Slide back and forth on a button and you'll create vibrato. Similarly, if you tilt the Orba while playing a note or chord you'll bend the pitch, like you would with a slider on a MIDI controller. That combination of physical interaction and the ability to fit in the hand, alongside its pick-up-and-play design make the Orba a delight for not just beat-making on the go, but idea generation.

Form and function — Now, of course, there are some limitations with a device so small and with so few buttons. For a start, though you can use the accompanying app (for desktop and mobile devices, and useable via Bluetooth or a wired connection) to change the default sounds, create and save songs, and adjust tempo and the key you're playing in, Orba's core focus in on one octave at a time.

That means you're confined to the eight notes of whichever key you set it to, and can't noodle with the semitones in between... but it's also that restriction that makes it both accessible for newcomers and such fun to play with — knowing whatever you play is going to be in key makes for fewer jarring, dissonant missteps, and encourages experimentation with melody and rhythm. If you want to switch between octaves, simply hold the A button, press the 8 / Oct(ave) button, and slide your finger right or left to switch up or down an octave.

If you do eventually tire of the selection of preset sounds Artiphon supplies with the Orba, there's still heaps of room for it in your music-making arsenal because you can connect it to any Digital Audio Workstation (DAW) — like Ableton Live, Logic Pro, or Pro Tools — and use it as a MIDI controller. That allows you to map it to presets, plug-ins, or other sounds and then take advantage of its gestures and novel user interface to manipulate them.

Loop, listen, repeat — While having the app open and connected can make it easier to create more complex arrangements with the Orba, playing it on its own is hugely satisfying. To lay down a track, all you need to do is turn it on, and press the A and then 6 / Record button. You'll hear a metronome, while the LED's around the edge of the device illuminate one after the other on the beat. Tap out a beat or a melody and hit the A button to end, and whatever you've recorded will start looping. You can then overdub as many additional parts as you'd like, erase ones you don't, or simply let the loop play while you test out different sounds before recording them.

Having keys arranged in a circle rather than in a row like they are on a conventional keyboard has changed how I think about melodic patterns, and the ability to slide between the buttons, create vibrato on them, or tilt the Orba while holding a pair (or more) of notes and chords feels so much more expressive than a regular keyboard (and more akin to the sort of tactile expression Roli's Seaboard offers, but in a much smaller and more portable package.) At the same time, playing with the Orba has helped inspire ideas I can translate to my conventional MIDI-and-DAW setup.

But I think my favorite thing about the Orba — and the thing that truly makes it rule — is that I can take it anywhere, plug in headphones, and amuse myself for ages. It sure beats doomscrolling on Twitter. And one day, when long-distance travel is a thing again, I can't wait to while away hours with it. My only sadness about the Orba? That I only found it now and not at the beginning of lockdown.