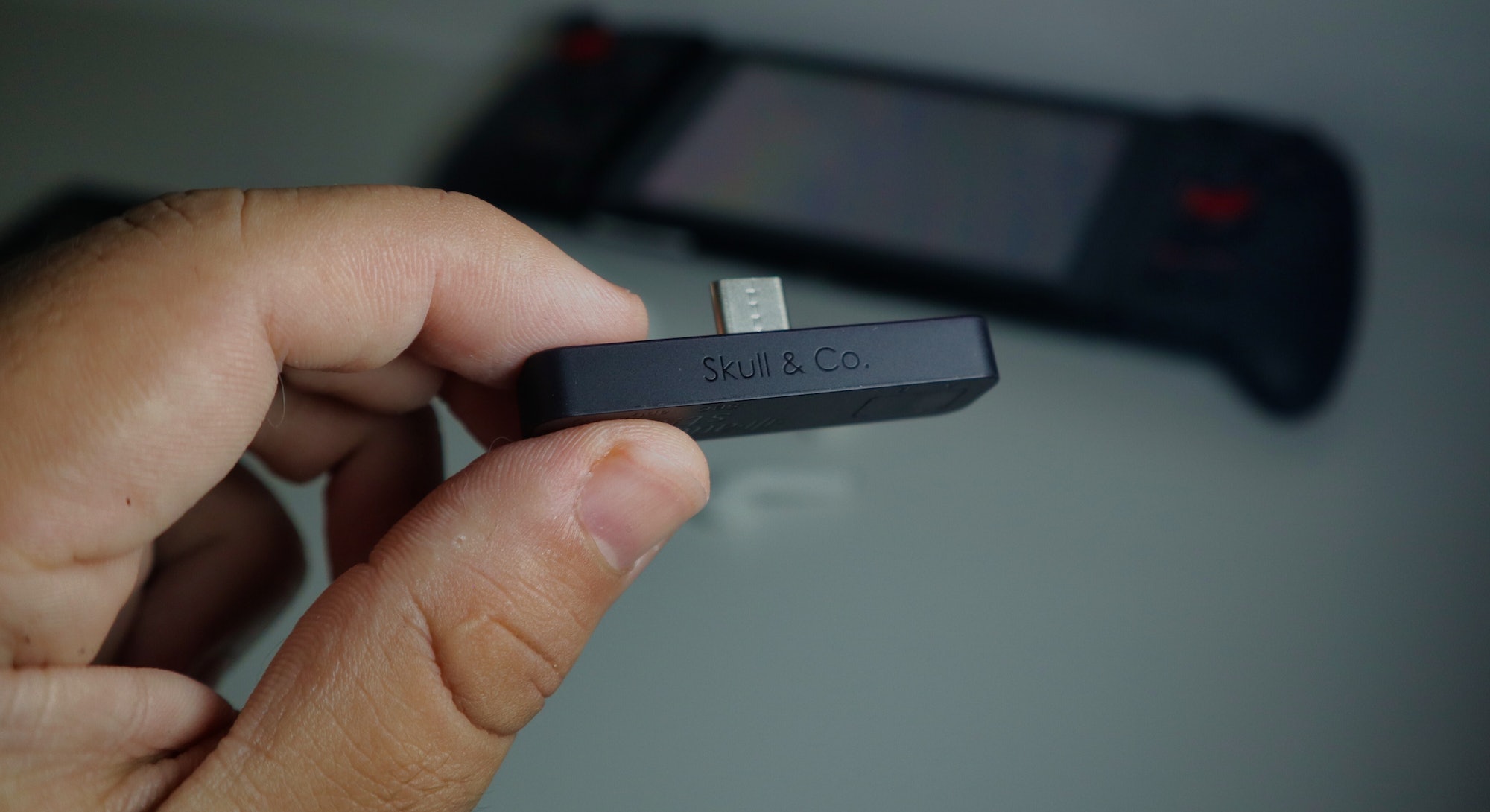 There are a lot of reasons to feel let down by Nintendo’s upcoming OLED Switch. It’s got the same Nvidia Tegra chip and allegedly the same drifting-prone Joy-Cons. Even with a new OLED display, it’s still 720p resolution. But if you read Input on a regular basis, you know what we’re most upset about: There’s no way to connect Bluetooth wireless earbuds or headphones to the Switch.

It’s a missing feature that continues to confound everyone since the Switch has Bluetooth but it’s only used for controllers. I got sick of waiting, so I got the Skull & Co. AudioStick Bluetooth adapter, which finally brings Bluetooth headphone pairing to the Switch for only $30.

The Skull & Co. AudioStick is a dead simple way to add Bluetooth headphone and earbuds connectivity to any Nintendo Switch.

So why this adapter and not the dozen others on Amazon like the 3.5mm adapter in our DIY Switch Pro build? It’s because Skull & Co. is a brand I’m familiar with, responsible for designing the excellent GripCase for the Switch and Switch Lite, and the Jumpgate dock, which is one of the few Switch docks that won’t fry your console. I was not let down by my decision. The Skull & Co. AudioStick is a Bluetooth 5.0 adapter that connects to the Switch’s USB-C port and works with both the regular Switch and the Switch Lite with the included spacers. It can also be used in docked mode with the included adapter cable. Unlike many other Bluetooth dongles that protrude quite a bit, the $30 AudioStick has a low profile and doesn’t attract attention. There’s no tiny display for visual pairing cues, but the two physical buttons and a couple of LEDs do the trick to let you know a connection status.

I tested the AudioStick on both a Switch and Switch Lite using a pair of Apple’s AirPods — the AudioStick is “optimized” for AirPods — and a pair of Jabra 65T earbuds. The sound quality depends on the wireless earbuds you’re using, but it also depends on the codec being used. In this case, the AudioStick supports SBC/LDAC for Sony headphones and AAC for AirPods. The aptX and aptX LL codecs are also supported but I don’t own headphones with either codec and could not test. As far as I can tell, the sound quality from both pairs of wireless earbuds connected to my Switches is no different from when they’re paired to my phone. I played a few hours of Art of Rally and Trigger Witch, and the former’s synth-heavy, chill soundtracks sounded great.

After setting both the adapter and headphones to pairing mode, it takes a few seconds to complete pairing. As I discovered, it’s best to disconnect your Bluetooth earbuds or headphones from previously paired devices so there’s less interference.

The AudioStick’s also got a good memory: It can remember the connections for up to four pairs of wireless headphones/earbuds so you don’t need to re-pair them every time, though only two can be connected simultaneously. Pairing two sets of wireless earbuds is great for co-op play. I imagine that when you’re playing with your friend on a rooftop somewhere (a scenario that I realize only happens in Switch commercials), you can each put on wireless earbuds and play Super Smash Bros. Ultimate.

However, the dual-pairing feature required some finessing the first time I tried it. To properly pair both pairs of wireless earbuds, be patient and wait for the first pair to connect by hitting the “A” button first. After that happens, hit the “B” button to connect the second pair of wireless earbuds. Once both pairs of wireless earbuds are successfully paired to the AudioStick, all you have to do next time is turn them on and wait for them to pair. When it works, you’ll see a solid white light shining through both buttons. But if you’re having trouble, just reset the device by holding down both buttons, which erases all pairings and starts from scratch. It’s great for co-op play on the same Switch, and it’s a nice bonus to the already solid device..

Latency is usually blamed for why Nintendo hasn’t added Bluetooth audio support to the Switch. While it’s a legit concern especially if you’re gonna be bothered by audio lagging behind gameplay — even by a second or two — it’s barely noticeable with the AudioStick. Any lag is really gonna depend on your wireless earbuds and the codec used. If you’re using AirPods, the AAC codec has a really low latency of 0.06 seconds and the latency is on par with what you get out of the Switch’s built-in speakers.

If using the standard SBC (or LDAC) codec, which my Jabra 65T earbuds do, the 0.20-second latency is noticeable if you’re listening closely — that’s more than three times the latency of AAC. I noticed it the most in the home menu when scrolling through games, but when playing the rhythm game Thumper, the latency was not an issue for me. In The Legend of Zelda: Breath of the Wild, a game that relies on sound cues for parrying or deflecting guardians’ beams, again, the latency did not affect me. Though, if you’re sensitive to latency or want the best gaming experience, you may want to try to use earbuds with AAC, or even aptX and aptX LL, which have latency of 0.06 seconds and 0.04 seconds, respectively. (The Master & Dynamic MW08 Sport wireless earbuds offer SBC, AAC, and aptX.)

Any lag is really gonna depend on your wireless earbuds and the codec used.

Apart from the occasional pairing hiccup, there’s a subtle hiss when the headphones are turned down low. It could be caused by wireless frequency interference. Thankfully, the hissing goes away completely when the volume is cranked up so it doesn’t ruin the experience. Audio cutting out isn’t a major concern, except for the one or two times I rested the Switch (with the adapter) on my lap to look something up. Unless you play with the Switch placed firmly on your lap, you shouldn’t experience cutout mid-game. Not sure why that’s the case, but it is! The AudioStick has the option to use voice chat via your earbuds’ microphone, but that’s useless since voice chat can only be used via the Nintendo Switch Online phone app for the few games that support it. Even worse, turning on the mic lowers the volume due to “technical bottlenecking,” according to the packaging.

All these minor gripes did not sour me on the AudioStick because it does the one thing I bought it for, and that’s letting me connect my wireless earbuds via Bluetooth. Latency, pairing, and the rare audio cutout were insignificant enough in my testing to make the AudioStick a deal-breaker. For $30, the AudioStick is pretty inexpensive. My only regret is that I didn’t buy this adapter sooner. If you’ve been looking for a dead simple way to connect AirPods (or any pair of Bluetooth earbuds/headphones) to your Switch, the AudioStick gets a thumbs up from me.