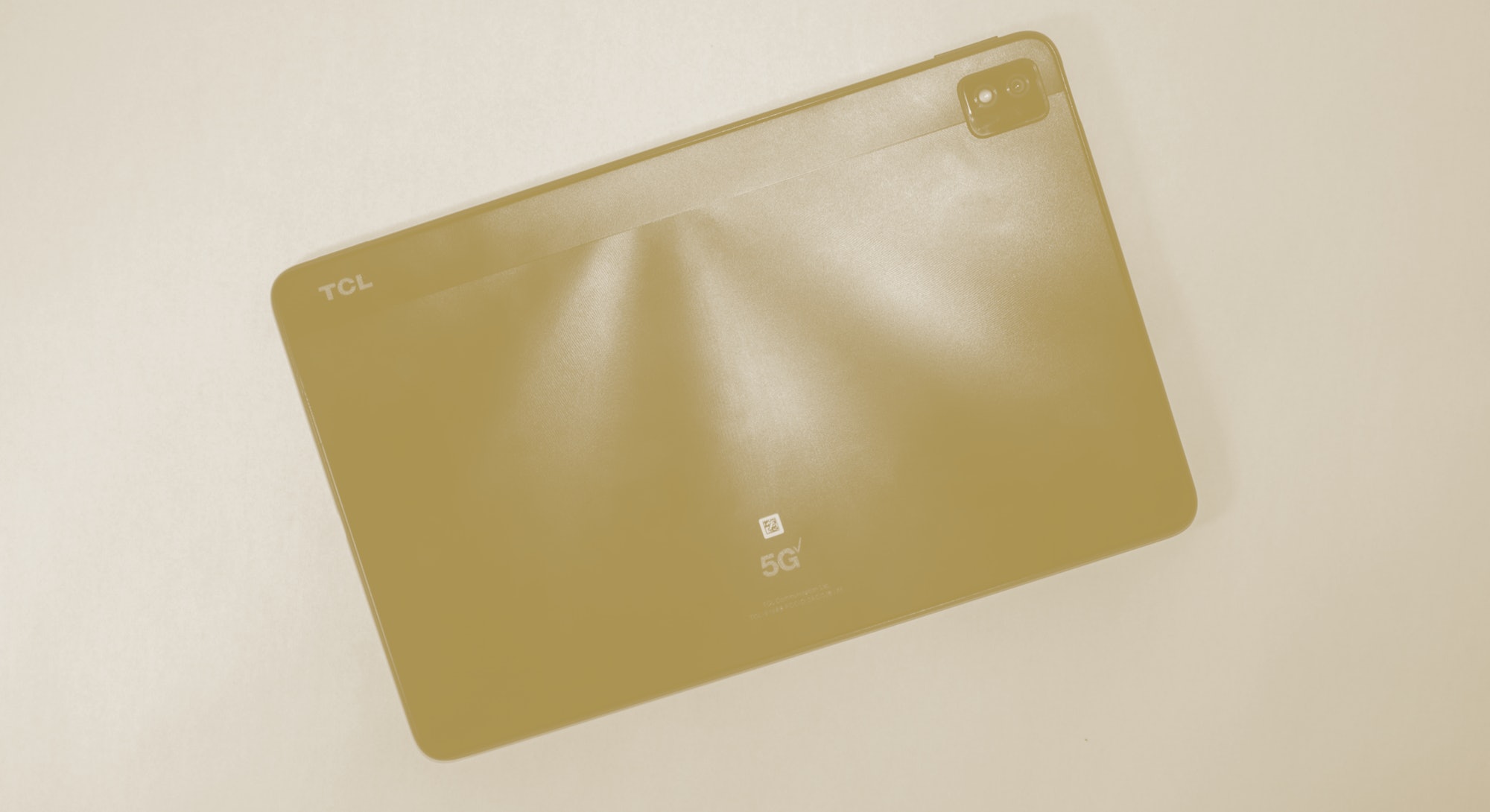 The recent influx of mid-range and budget tablets only means one thing: tablets are hot again, baby!

While the TCL Tab Pro 5G is a reliable mid-range tablet, unfortunately, it shoots itself in the foot in two ways: its features don’t justify the $400 price and it’s exclusive to Verizon.

I can vouch for the Tab Pro 5G’s vibrant 2K screen, long battery life, and above-average gaming performance, but it's by no means the best Android tablet around. The tablet is fine for basic tablet things like web browsing and streaming videos, but one thing I’m sure of: there’s nothing “pro” about it.

The TCL Tab Pro 5G is an exclusive device that commands an eyebrow-raising price.

As with Nokia T20, the Tab Pro 5G is all about the entertainment side of things. It's why the TCL Tab Pro 5G has a 10.36-inch 2K IPS display and speakers that pump out some seriously loud sound. The tablet is great for streaming shows from services like Netflix or Funimation, especially if you’re on the road and have a 5G data plan. If you’re on Verizon’s mmWave Ultra Wideband 5G, which can reach speeds up to 1Gbps, streaming quality is as good as with home internet and 4K is no prob at all.

The catch is you’ll need to find an area with Ultra Wideband coverage, which is still very limited to a handful of major cities in the U.S. On the other hand, Verizon’s standard 5G is more widespread, but download speeds are nothing to write home about. Streaming in 1080p should be fine, but you may notice network hiccups. I watched Super Crooks on the standard 5G and experienced no issues when at home. Outside, video quality on YouTube videos was sometimes significantly lower (480p) to maintain a steady download, but I was able to manually adjust the quality to 1080p with buffering just a few steps behind.

Over the holidays, I streamed hours of video over Wi-Fi without significant impact to the battery life while I built a Gundam. The high-res screen is a delight for graphic novels. Illustrator Jamal Campbell's vivid panels for N.K. Jemisin’s sublime take on the Green Lantern Series, Far Sector, really popped.

Underneath the hood is Qualcomm's mid-tier Snapdragon 480, a chip I'm familiar with after extensively testing the Nokia XR20. It's not a chip that will wow you, but after playing around with the Nokia T20 and its laggy Unisoc Tiger T610 chip, it felt much better than I remembered. It may have been slow to register a touch input from time to time, especially in games, but it’s decent enough.

I loaded up Final Fantasy VII: The First Soldier, a game that proved too much for the T20, and it played smoothly on the Tab Pro 5G. Admittedly, the graphics weren't up to par with what I'm used to on the iPad Air 4. Even so, the gameplay was fluid, with the larger size of the tablet making for comfortable touch controls. I also booted up other graphically intensive games such as the popular MOBAs Pokémon Unite and League of Legends: Wild Rift. Both ran well, and I preferred playing Pokémon Unite on the tablet rather than my standard Switch because the game looked better on the bigger, brighter, sharper, and more colorful screen. For LoL: Wild Rift, the game looked great after switching to framerate priority mode. As for graphical powerhouse games like Genshin Impact, I had enough experience with the Adreno 619 GPU on the Snapdragon 480 to know gameplay was possible but super choppy. That's an outlier, though, and I do believe the Snapdragon 480 can handle a vast majority of games on the Play Store.

There’s a 13-megapixel rear camera with LED flash and an 8-megapixel camera on the front. But let’s be real: they’re tablet cameras. Serviceable, but incomparable with really good phone cameras like the iPhone 13 Pro, Galaxy S21 Ultra, or Pixel 6 Pro.

One of the pillars of this tablet is its excellent battery life. The Tab Pro 5G has an 8,000 mAh battery that is rated for 17 hours of mixed usage. Between streaming, reading comics, browsing the web, and gaming, that doesn't sound far from the truth. And with battery savings mode, the Tab Pro 5G enters a hibernation that stretches battery life further, with a few compromises such as a dimmed screen in return. Instead of reaching for a charger when the tablet hit low battery mid-anime episode, I continued to watch the show until four episodes had passed. The impact on battery life: three percent.

I did have a few issues with the Tab Pro 5G. For one, it takes four hours to fully charge even with the included 18W fast charger. I'd hate to think what charging time would be without it. You won't have to charge often because of the long battery life, but it'll feel like an eternity when you do.

It's best to consider the tablet out of service for the hours it takes to charge. But because I had other devices to use when charging the Tab Pro 5G, it didn't stop me from doing what I wanted. Conversely, if you're traveling and need to sit by an outlet in-between flights, that four-hour charge is going to hit differently — yikes!

Another issue I had was with something TCL calls Nxtvision. It's essentially a visual enhancement that you can toggle on to make SDR content appear as if it's HDR. It sounds like a handy feature that puts the display front and center, and I was hoping to be blown away. That didn't happen. While it sounds great on paper, it's useless in practice — I'm not exaggerating. I tested the feature on games, shows, YouTube videos, and comics, and I noticed no hint of a difference when toggled on or off. It all looked the same to me, and that's with me closely scrutinizing every pixel. If TCL was hoping for Nxtvision to be a selling point, I can tell you it’s not.

There also are no accessories. Apart from a basic case and a screen protector that Verizon sells, you're out of luck. There's no stylus support or a keyboard case, which would make this tablet much more useful if you're using it for work trips or creative projects outside the home. The Tab Pro 5G has POGO pins down the left side; a TCL spokesperson confirmed it’s for keyboards and cases, though there are none available for purchase at the moment.

Not worth the 5G

Compared to two other tablets I've had in rotation recently, the Nokia T20 and iPad Air 4, TCL's Tab Pro 5G felt like an in-between device; it's powerful enough for most gaming but doesn't have the chops for photo/video editing or any CPU-intensive tasks. That's to be expected from its puny chip. With the competition from the iPad 9 and Samsung Galaxy A8, $399 is too steep. However, when it comes to 5G tablets, the TCL Tab Pro is likely the most affordable option you'll find at the moment.

You can only get the tablet at Verizon, which makes it an instant non-starter if you’re on any other U.S. carrier. And then, there’s the cost for 5G: either $80 or $90 a month, with both plans offering unlimited mmWave 5G Ultra Wideband. The standard Sub-6 5G speed isn’t noteworthy; I got speeds ranging from 20 Mbps up to 70 Mbps depending on location here in Denver, CO. Sub-6 5G is enough for browsing the web and checking your email, but not worth the monthly plan.

On the other hand, mmWave 5G blew me away. When I could hook up to mmWave at home, I got speeds up to 700 Mbps, which is almost on par with what I have at home. I was able to download games like PUBG and Pokémon Unite — games that are around 750MB — in less than 30 seconds each, and 1080p YouTube videos loaded instantly, with no buffering whatsoever. The lack of mmWave coverage everywhere is the biggest downside; even in a city with mmWave, it’s only in some areas. If you’re traveling or are somewhere in the sticks, you can’t bet on getting mmWave speeds.

If you're in the market for a 5G-capable tablet, your options are limited, and the TCL Tab Pro 5G is currently the only sub-$500 option across Verizon, AT&T, and T-Mobile. It doesn’t change the fact that this tablet is merely average, but it’s a hell of a lot better than paying $650 for the latest iPad mini 6 or $1,000 for an 11-inch iPad Pro with 5G. It's a shame there's no non-5G version. If you're looking for a more affordable mid-range Android tablet to use over Wi-Fi, there are dozens of cheaper and better options out there.