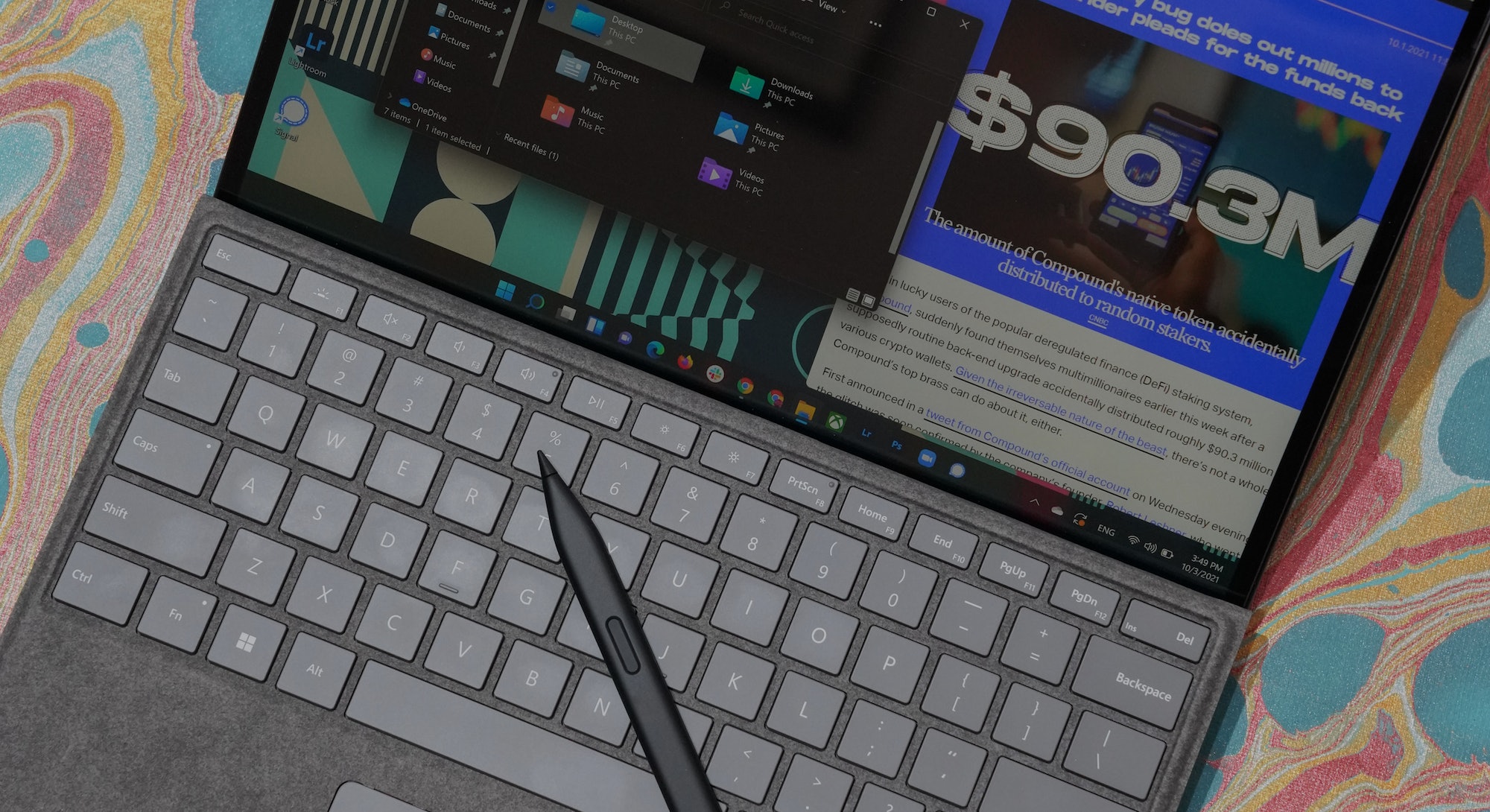 2019 was a very strange year for Microsoft.

The Surface Pro X ended up not being ready for primetime and the Surface Pro 7 played it safe by not adding anything new except one USB-C port (it wasn’t even Thunderbolt).

Two falls later, the Surface Pro 8 is here and it is exactly what everyone has been asking for: the power of a proper modern x86 laptop in the sexy form factor of the Surface Pro X.

Whatever the reason for taking so long to arrive — my guess is thermal limitations with Intel’s chips because that’s always the holdup — the Surface Pro 8 is as close to perfect as a 2-in-1 gets. It is without argument the best laptop replacement available. There are many Surface Pro imitators out there now, but the Surface Pro 8 is a reminder that there’s nothing like the real deal.

Other than the venting, there are two external differences: the Surface Pro 8 is two millimeters thicker and 0.26 pounds (117 grams) heavier than the Pro X. The Surface Pro 8 with Type Cover Keyboard and Surface Slim Pen 2 weighs 2.61 pounds. Apple’s 13-inch M1 MacBook Air weighs 2.8 pounds by comparison and the M1 iPad Pro with Magic Keyboard weighs a total of 3.01 pounds. Guess which one I prefer carrying around in my backpack all day long.

Microsoft sent me a black “graphite” Surface Pro 8 to test and in the week I’ve been using it as my main computer at home and nearby cafes, the matte aluminum finish has done a bang-up job repelling fingerprints no matter how I grabbed it. I recall the black Surface Laptop 3 being nearly impossible to keep clean. Of course, the Surface Pro 8 also comes in a silver “platinum” finish if you’re boring like that.

Just like the Pro X, nothing about the Surface Pro 8 feels cheap. The aluminum body is precision CNC’d for rigidity, the Type Cover Keyboard snaps on via magnets with a satisfying clack, and the hinge that enables the kickstand to open at various angles is confidently smooth and sturdy just like on any other Surface Pro. Microsoft cut no corners on the Surface Pro 8’s build quality and you can feel it every time you pick it up. This thing feels like a computer that starts at $1,100.

At first glance, the Surface Pro 8’s 13-inch PixelSense display looks identical to the one in the Surface Pro X — they’re the same size and the same resolution (2,880 x 1,920). But there’s actually more than meets the eye for the Pro 8’s display. Microsoft calls it a “Flow display” (an aside: display names are getting ridiculous — Microsoft uses “PixelSense Flow display” and Apple calls the iPhone 13 Pro screens “Super Retina XDR displays with ProMotion”), which is just jargon for a screen with an adaptive refresh rate that tops out at 120Hz.

By default, the Surface Pro 8’s display is calibrated to 60Hz. However, if you want twice the fluidity for scrolling and swiping, you can change that to 120Hz in the display settings. I turned 120Hz and left it there for a few days until I turned it off to get longer battery life. That’s the tradeoff of 120Hz: reduced battery life. To my surprise, 120Hz didn’t totally destroy battery life at twice the rate (more on battery later).

120Hz works as advertised — Windows 11 and scrolling does indeed feel more responsive — but the adaptive part where the display is supposed to automatically switch between 60Hz to 120Hz depending on what’s happening on screen didn’t work. Microsoft confirmed to me that the display (at least for now) is locked to either 60Hz or 120Hz and declined to comment on when its adaptive functionality would be activated. Windows 11 is launching without the Dynamic Refresh Rate feature that allows devices with adaptive refresh rate displays to conserve power so it’s not surprising that it’s not available on the Surface Pro 8.

Even so, the 13-inch display is splendid. It’s larger, higher resolution, and supports Dolby Vision HDR and what Microsoft calls “GPU Ink Acceleration” that uses the integrated Intel Iris X Graphics to reduce latency while writing or drawing with the Surface Slim Pen 2. The display is also plenty bright with 450 nits of peak brightness.

The 2W stereo speakers took me by surprise. They support Dolby Atmos and produce loud and full sound that can easily fill a room. They’re almost too loud. At 100 percent volume, I was worried that my very sweet elderly neighbors might complain. Though I love the loudness, I had to lower the volume to a less disruptive 50 percent, which was still very loud and crystal clear.

The 2W stereo speakers took me by surprise.

The webcam is also great. Sitting on a few Zoom calls in my living room that’s lit only by a single standing lamp in the corner, I could my face in crisp 1080p glory; there’s some good noise-reduction processing happening. The rear camera... is serviceable. I used it to “scan” a few dentist bills and converted them just fine to PDFs.

A Type Cover Keyboard is a must-own accessory for the Surface Pro 8 and the new one is mostly solid to type and mouse around on. The keyboard magnetically clips to the bottom of the Surface Pro 8 and then attaches to its bottom bezel. The keys have good travel to them, but several of the keys (weirdly concentrated in the upper right — enter, \, backspace, delete) were squeaky, like they could use some lube or a spritz of WD-40. I also noticed input lag/freeze on more than a few occasions (at least a few times while typing this paragraph out). I don’t know if this is just my particular Type Cover Keyboard, but I never had any connection issues with the Type Cover and the Surface Pro 7. Speaking of the Pro 7 Type Cover: it’s not compatible with the Surface Pro 8. You’ll need to get a new one and it’s not cheap: $180 without a Surface Slim Pen 2 and $280 with one. In comparison, a Pro 7 Type Cover starts at $130.

The trackpad on the Type Cover is also larger. Not a major increase in surface area, but it’s more room to perform various multi-finger gestures like a four-finger swipe to switch between virtual desktop spaces.

The Surface Pro 8 drops the Pro 7’s USB-A and USB-C port for two Thunderbolt 4 USB ports. Yes, this means you’re gonna need dongles to connect USB-A accessories, but it also means the ports are fast. Each of the Thunderbolt 4 ports is capable of 40Gbps data transfers. And unlike on MacBooks, the Thunderbolt 4 ports are spaced apart enough to accommodate larger-than-normal USB-C plugs. There’s also a magnetic Surface Connect port on the right and a headphone jack on the left — Microsoft thankfully didn’t summon any courage to remove them.

The Surface Pro 8 ships with Windows 11 — warts and all. As I write this in Google Docs within Chrome, I have 27 other open browser tabs. Spotify is blaring music. Lightroom and Photoshop are open in the background. My second virtual desktop has my personal Chrome profile loaded up with eight tabs. Someone is pinging me nonstop on Signal and Slack. The Surface Pro 8 has yet to choke up on my review unit configuration which has a quad-core 11th-gen Intel Core i7-1185G7 processor, Intel Iris Xe Graphics, and 16GB of RAM. Everything is humming along smoothly — and here’s the craziest part — the Surface Pro 8 is not burning up. The tablet is barely even warm.

Microsoft says the Surface Pro 8 is more than two times faster than the Surface Pro 7 — up to 40 percent faster CPU and 74 percent faster GPU. With the Surface Pro able to handle everything so well — running both Lightroom and Photoshop usually brings Surface Pros to its knees — I saw no value in running synthetic benchmarks. The weirdest part is that the same workload above quickly crippled a 13-inch Surface Laptop 4 and spun up its fan to an audible level despite it sharing the same Intel CPU and GPU.

Whatever sorcery Microsoft is using to manage the Surface Pro’s performance while pushing performance — it works and greatly impresses.

The Intel Iris Xe Graphics means you won’t be doing any serious gaming with a Surface Pro 8… unless you stream them using Xbox Game Pass Ultimate. I tried this out with Forza Horizon 4, Gears 5, and Hades (yeah, yeah, I’m super late to playing it), and all three of them ran smoothly on my super fast T-Mobile Home Internet.

Did I mention the SSD is removable> Just use a paperclip or a SIM card ejector tool to pop off the little plate on the back of the Pro 8 to reveal the M.2 2230 short SSD module.

Now for the Surface Pro 8’s weakest point: battery life. It’s not best-in-class, but it’s also not at the bottom either. With brightness set at my usual 75 percent (I occasionally crank it up to 100 percent for when I’m editing photos) and the refresh rate at the default 60Hz, I got on average around 5-6 hours of battery life with the above workload. On a Saturday, working exclusively in Chrome, I got around 7 hours of battery life from a single charge. With 120Hz turned on, I saw a dip of around 1.5 hours. I didn’t get anywhere near Microsoft’s “16 hours” of battery life for “typical use” but we all know those ratings are best-case scenarios that don’t reflect real-world mixed usage.

I’m spoiled by the M1 MacBook Air/Pro’s 8-ish hours of mixed use and 12-ish hours of web browsing. If not for the Surface Pro 8’s fast charging — 0 to 80 percent in about an hour — with the included Surface Connect power adapter, the middling battery life would have been a real sore spot.

Out of all the Surface computers that Microsoft has ever made, the Surface Pro 8 is the greatest. It is everything that makes a 2-in-1 laptop replacement fantastic with next to no downsides.

No Windows laptop comes close to delivering the freakishly long battery life an M1 MacBook Air/Pro is capable of. We’ve reached the point where it’s not even a fair fight to compare them since Apple silicon is so much more power-efficient than Intel’s. But where the Surface Pro 8 lags on battery compared to M1 MacBooks, it more than makes it up with its fast charging, stunning and responsive touchscreen, multi-mode form factor, and stylus support.

You can easily find a clamshell Window laptop or even one with a 360-degree display for less than the price of an entry-level Surface Pro 8 (Core i5 CPU, 8GB RAM, and 128GB SSD) and Type Cover Keyboard, which comes out to $1,280. (I tested a $1,880 configuration). But you don’t get the cutting-edge industrial design, the unparalleled hinge and kickstand, or the marriage of hardware and software that’s tuned together so well (I’m still stunned by how the Pro 8 sustains performance with such low thermal output). There’s always a caveat or two or three to other Surface Pro clones. That’s not the case with the Surface Pro 8 — it is the undisputed 2-in-1 champion by a long shot and the best anti-MacBook out there.