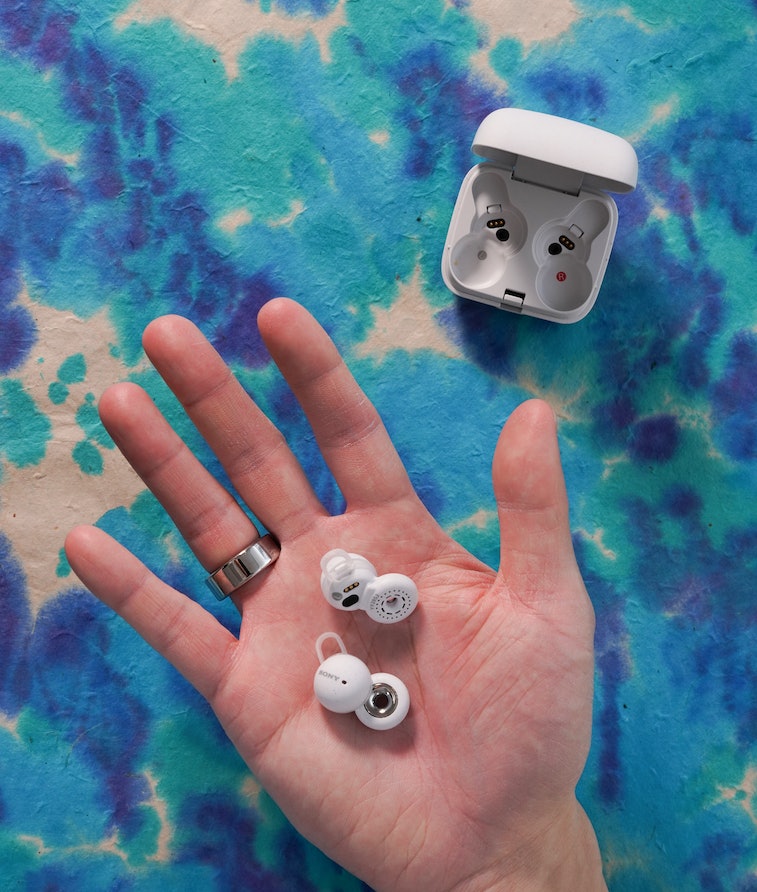 Sony's LinkBuds are the weirdest wireless earbuds I've ever used. Just look at their donut-shaped design (officially called an "open ring design") and you immediately know there's something very different about them.

The pitch to me from Sony last week was a bit mixed. I heard everything from "they're for Gen Z" to "an always-on product to link your online and offline worlds,” to the LinkBuds' tagline: "Never off." I'm not convinced any of the reasons are good ones to solely buy the LinkBuds over AirPods 3, or Nothing Ear (1), or any of the dozens of wireless earbuds that come out every year (that we just so happen to review).

The LinkBuds are also not a successor or even in the same family as Sony's excellent WF-1000XM4 active noise cancellation (ANC) earbuds. They're a category of their own — eye-catching design and all — and cost less at $180. The biggest distinction: LinkBuds don't have ANC, which means they're more of an AirPods 3 competitor (also $180) than AirPods Pro ($250) or Galaxy Buds 2 ($150).

You can always count on Sony to push the boundaries of design if you want something different — the LinksBuds are different for different's sake. But the sound, comfort, features, and price do not blow away any existing buds that cost the same, more, or even less. That's just how cutthroat the wireless earbuds space is.

Sony LinkBuds don't look like other wireless earbuds, but the features themselves are a tough sell for the money.

I appreciate what Sony was going for with the LinkBuds. These don't look anything like AirPods or wireless earbuds with stems — OnePlus Buds Pro or Nothing Ear (1) — or stemless-buds like the Galaxy Buds Pro or Amazon Echo Buds 2. The LinkBuds are smaller than they look in online photos — the case is equally tiny — and the bespeckled surface gives them a unique look. For some reason the bespeckled look has become somewhat synonymous with sustainable materials. These buds and their charging case are made of recycled plastic and the packaging is plastic-free. Nike also uses bespeckled finishes for sneakers made from sustainable materials.

The disc/ring design means there are no in-ear tips for a passive seal, which also means there's no ANC. There are some rubber fins (four sizes ranging from XS to XL are included) to fit different ears, but I wouldn't say they're the comfiest. There's no fin ear-test in the corresponding Sony Headphones app; I tried various fins (and even mixed and matched) to find the best fit. In the end, I went with the large fins and even though they tuck under the flap above my ears' conchae better than the medium fins, the LinkBuds have fallen out several times during the past week of daily use. In fact, as I type this review, the fin on my left bud popped out just as I got up to stand. Your mileage may vary.

Though the LinkBuds are IPX4 water and sweat-resistant, I didn't enjoy working out with them. If they didn't fall out while I did crunches and pull-ups, they were stiff in my ears during a run in the cold.

LinkBuds sound okay — fine, nothing special. The buds come with a custom 12mm ring driver, which delivers more bass than I expected these tiny donuts would. Sony — like every audio maker — says there's little distortion but I only found that to be the case at volumes 50 percent or lower. Bassy songs at even around 75 percent start to fall apart. Dynamic range is not bad otherwise — similar sound profile to AirPods 2 in my testing; mids sound alright for all genres from pop, to rock, to hip-hop and the highs aren't quite as crisp as AirPods 3 / Pro. From my testing, sound quality is not the main selling point for LinkBuds. Again, it's the design.

Sony says that the LinkBuds are good for AR and mobile gaming. For example, you might wanna play Pokémon Go or other AR games where you are distracted in the real world by what's happening on your phone screen. This scenario, Sony says, is perfect for LinkBuds because their open-ear design means you can hear ambient sound while listening to your game's music.

Sony being weird Sony is such a Sony thing to do.

When I asked why not just get wireless earbuds that have an ambient mode that mixes outside noise with your music. I was told LinkBuds achieve this ambient listening without any special modes and that it's a way for safety awareness. In my opinion, you can just use non-ANC earbuds like AirPods 2 / 3, which don't cancel any outside noise, keep them at moderate volume and still hear your surroundings. I compared the LinkBuds to AirPods 2 / 3, all of which don't have ANC, and honestly, didn't feel like I could hear more of my surroundings than with Apple's earbuds. The other scenarios Sony said the LinkBuds' open-ear design are ideal for (fitness, office, and remote work) aren't any more compelling if you ask me.

Microphone quality is mixed. On Signal, an app notorious for its poor call quality, my colleague Cheyenne told me I didn't sound great. On regular calls, FaceTime, and Zoom, I was told I sounded fine, but sometimes a little tinny. I tested the mics using an iPhone 13 Pro, Galaxy S22 Ultra, and Pixel 6 Pro, and the call quality was the same on all three phones.

Controls are pretty standard. A double-tap for play / pause and a triple-tap for the next song. With the app, you can customize the two settings for track, volume, or voice assistant control. I had my left earbuds mapped to the aforementioned default controls and the right earbud taps for volume up and down.

The app also has a few extra settings like an equalizer for custom audio profiles and several presets if you prefer Sony's tuning. Additionally, the app shows battery percentages for the buds and case, and has toggle to turn on Speak-to-Chat, a feature that pauses your music when the microphones detect you're speaking. It works. But as I said in my WF-1000XM4 review, it can be annoying if you think out loud or you cough or clear your throat often (yes, I tried the latter two and it's that sensitive.)

For such tiny wireless earbuds, the LinkBuds last a surprisingly long time. Sony rates them at 5.5 hours per charge with 12 hours more in the case, which by the way doesn't support wireless charging but thankfully is USB-C. That's 30 minutes less than AirPods 3, an hour longer than AirPods Pro, and 30 minutes longer than Galaxy Buds 2 with ANC off but 2.5 hours less with ANC off. The larger Sony WF-1000XM4 buds, of course, come with a bigger, longer-lasting 8-hour battery life (with ANC).

You decide if the battery life is enough. It's enough for a single charge. Plus, a 10-minute charge via USB-C (note: there's no adapter in the box) gives you 1.5 hours of listening time when you need a boost.

I praised Sony's WF-1000XM4s and so did many reviewers. But I can't heap the same praise on the LinkBuds. At $180, the feature-to-value ratio is not very high. They’re a hard sell when there are so many better value wireless earbuds out there.

Sony being weird Sony is such a Sony thing to do. And maybe there are some diehard Sony fans for whom that's enough. But selling these buds as a solution to behaviors for AR mobile gaming or Gen Z is a major stretch. The LinkBuds think outside of the box when it comes to industrial design but don't offer much to justify it. Maybe if these wireless earbuds were $100, but even then, the Nothing Ear (1) crushes them with ANC. And if you go lower, the $80 Jabra Elite 3 are a terrific value for non-ANC wireless earbuds.