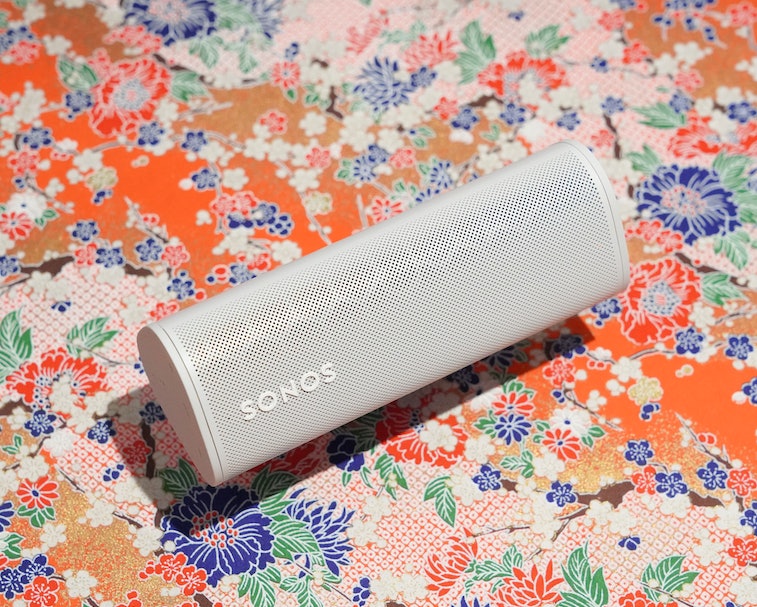 If I had a time machine, I'd go back to 2019 and slap whoever at Sonos thought the Move portable speaker was a good idea.

Weighing six pounds and coming in at $399, the Move was not the portable wireless speaker everyone was expecting. I can't imagine many people looked at the Move and bought into the "It'll be great for using in the yard or on the deck" just outside of your house.

Sonos has thankfully come to its senses with the Roam. At just one ounce under a pound, the portable speaker is considerably smaller and lighter; the $179 price is way more affordable; and it supports both Wi-Fi and Bluetooth for blasting tunes at home and on the go. The Roam is everything the Move should have been and the perfect speaker to hook you into the Sonos ecosystem whether you already have speakers or not.

The portable Bluetooth speakers I have at home are the UE Boom 2. This cylindrical speaker came out way back in 2015 and I picked up three in total over the years to get a multi-device, multi-room setup. I'll be honest: I've had zero urge to replace them. They still sound great, get really loud, and the batteries haven't deteriorated to the point that they don't last long enough at home or at a picnic in the park. Aside from some light cosmetic damage, my Boom 2 speakers have held up quite well. This is just how it is with Bluetooth speakers. Unless yours breaks, there's little reason to upgrade once you've got one.

But let's say you aren't like me and you're looking for a portable speaker that'll last as long as my Boom 2 speakers, sounds better, and connects seamlessly with other Sonos speakers. I can't recommend the Roam enough. For both home and outdoor listening, the Roam is an exceptional value.

The Sonos Roam is the best portable Wi-Fi and Bluetooth speaker with high-quality sound for under $200.

The first thing I did after pairing the Roam to my Sonos system (done via the Sonos app) was crank the volume to max and blast up Queen's "Bohemian Rhapsody" and Rage Against the Machine's "Killing In The Name" to see how it handles different frequencies at really loud volumes. Within minutes of jamming, the very nice people who live in the unit below mine knocked on my door to complain about the loudness. The nice people at the park the other day when it was almost 80 degrees also didn't appreciate hearing me pump up the Beastie Boys (even for a test). I apologize to everyone.

The Roam is one of the loudest portable speakers I've ever used, especially for the size. But its volume would mean nothing if the sound wasn't good. Fortunately, the Roam sounds stupendous. This isn't some generic Bluetooth speaker that Sonos slapped its name on. The custom audio components — two H-class amplifiers, one tweeter, and a custom "racetrack mid-woofer" — and Sonos' auto Trueplay tuning come together to crank out audio that betrays its compact dimensions.

The biggest complaint about most portable Bluetooth speakers is that they typically fall apart at higher volumes — bass gets mushy and distorted and highs get fuzzy with less definition. The Roam has the benefit of both streaming music via Wi-Fi and Bluetooth. When connected via Wi-Fi, the Roam pushes out the best sound I've heard in a portable Bluetooth speaker of this size. My 6-year-old Bluetooth-only Boom 2 gets loud, but there's a noticeable drop in bass clarity between it and the Roam when I listened to "The Hills" by The Weeknd (a song known to split Bluetooth speakers).

It pushes out the best sound I've heard in a portable Bluetooth speaker of this size.

It's an established fact that streaming music over Wi-Fi is superior to Bluetooth for a number of reasons such as reduced compression and more reliable connectivity and longer range. At home, the Roam fills up my entire 500-square-foot apartment with loud, full, clear sound. Away from home, the Roam automatically switches and connects to your phone via Bluetooth (indicated by its blue light vs. white for Wi-Fi); I noticed a little bit more distortion at higher volumes compared to Wi-Fi, but the difference is so minor only audiophile snobs would waste their breath complaining.

The design of the Roam also allows it to be positioned vertically or horizontally. Both sound good; vertically fires more directional sound and horizontally expands the sound to cover a wider space.

High-fidelity sound is a given with Sonos speakers, but the company has also spent the entirety of its existence selling users on its ecosystem. You don’t buy a single Sonos speaker, stream music, and be done. Whether you’re adding to an existing Sonos system or planning to build one out in the future, the Roam drops right in.

Besides supporting stereo pairing with another Roam and music syncing with other Sonos speakers, the Roam also has a “Sound Swap” feature that lets you send your music to the nearest Sonos speaker. There’s no need to tap the Roam to another Sonos speaker or fiddle with settings within an app — just long-press the play / pause button and like magic — whoosh — the closest Sonos speaker detects your requesting using an ultrasonic pulse via its microphone(s). It works exactly as advertised and is easily the most underrated feature on the Roam.

Sound Swap is, of course, non-functional if you don’t have another Sonos speaker. But if you do (any Sonos device running S2 like the Arc soundbar) or you plan on getting one (or more) later, it’s really neat and gives the Roam added functionality beyond your average portable Bluetooth speaker.

Sonos rates the Roam's battery life with "up to 10 hours" for continuous music playback and 10 days of standby. Of course, the runtime will depend on your usage. Are you listening continuously via Wi-Fi or Bluetooth streaming? What volume is the speaker set at? Is the microphone on or off? Can you get 10 hours of continuous playback? Sure, if you're connected directly through Bluetooth. However, expect to get between 7-8 solid hours of mixed usage when switching between Wi-Fi and Bluetooth at around 50-75 percent volume. This is less than the 15 hours my ancient Boom 2 speakers get and the 20+ hours on other portable Bluetooth speakers. It's not exactly a fair comparison pitting the Roam, which does Wi-Fi and Bluetooth streaming, against a strict Bluetooth speaker and 7-10 hours is actually plenty.

And thank god the speaker charges with USB-C. Device makers are still to this day trying to save every penny (Amazon is the biggest offender) by choosing micro USB instead of USB-C. I don't blame them since micro USB ports cost about three cents in volume compared to 10 cents for USB-C, but no premium device maker should be pinching pennies so hard — I'm so glad Sonos did the right thing. Included with the Roam is a nice and thick USB-A to USB-C cable; the latter end is L-shaped, which is designed for when the speaker is horizontal, but less ideal when it's stood up. Not great: there's no power adapter included. The USB-A side also means you need to carry another separate power adapter if you've fully embraced USB-C chargers for your phones and other devices like I have.

The Roam can also be charged using a wireless charging base. It costs $49 and Sonos didn't send one to me to test so I have no idea how fast or slow it charges; Sonos' Roam user guide lists "2 hours wirelessly" but doesn't specify if that's with its charging base or a Qi charger or both.

Sonos is synonymous with home speakers. The Roam is the company's first true portable speaker that actually frees it from the confines of four walls and brings Sonos' quality sound wherever you want it. It's the portable Sonos speaker that the company should have made years ago. I know, the Move is technically Sonos' first portable speaker but let's pretend it doesn't exist because six pounds isn't portable in my book.

The timing of the Roam's release later this month on April 20 couldn't be better. Once everyone is vaccinated and we're all able to spend time outdoors in groups again, the Roam is going to come in handy in places like the park or the beach. My aging UE Boom 2 speakers are better than the Roam in a few ways; they’ve got a 3.5mm aux port (though, many newer Bluetooth speakers don't), a hook for hanging on a backpack, and longer battery life. But the Roam sounds far better and is more future-proof if you have a Sonos system at home or you're thinking of building one out later (even if it's piece by piece).

The Roam is a superb portable speaker for the price.

There are features that Sonos could have done better like making the power button less flat (it's so flat I never know if I pressed it or not), speeding up Qi wireless charging (only Qi pads with at least 10W of power are supported, which explains why all of mine didn't work), and extending battery life (10 hours is short of the 15-20 hours on other BT speakers). All good things to add to the Roam 2.

$179 sounds like a lot of dough for a good portable speaker. But it’s actually in the same price class as UE’s newer Blast speaker, which also does Wi-Fi and Bluetooth audio streaming and costs $180. As it is, the Roam is a superb portable speaker for the price. Sonos really did it. This is the one to get if sound quality is your top priority.