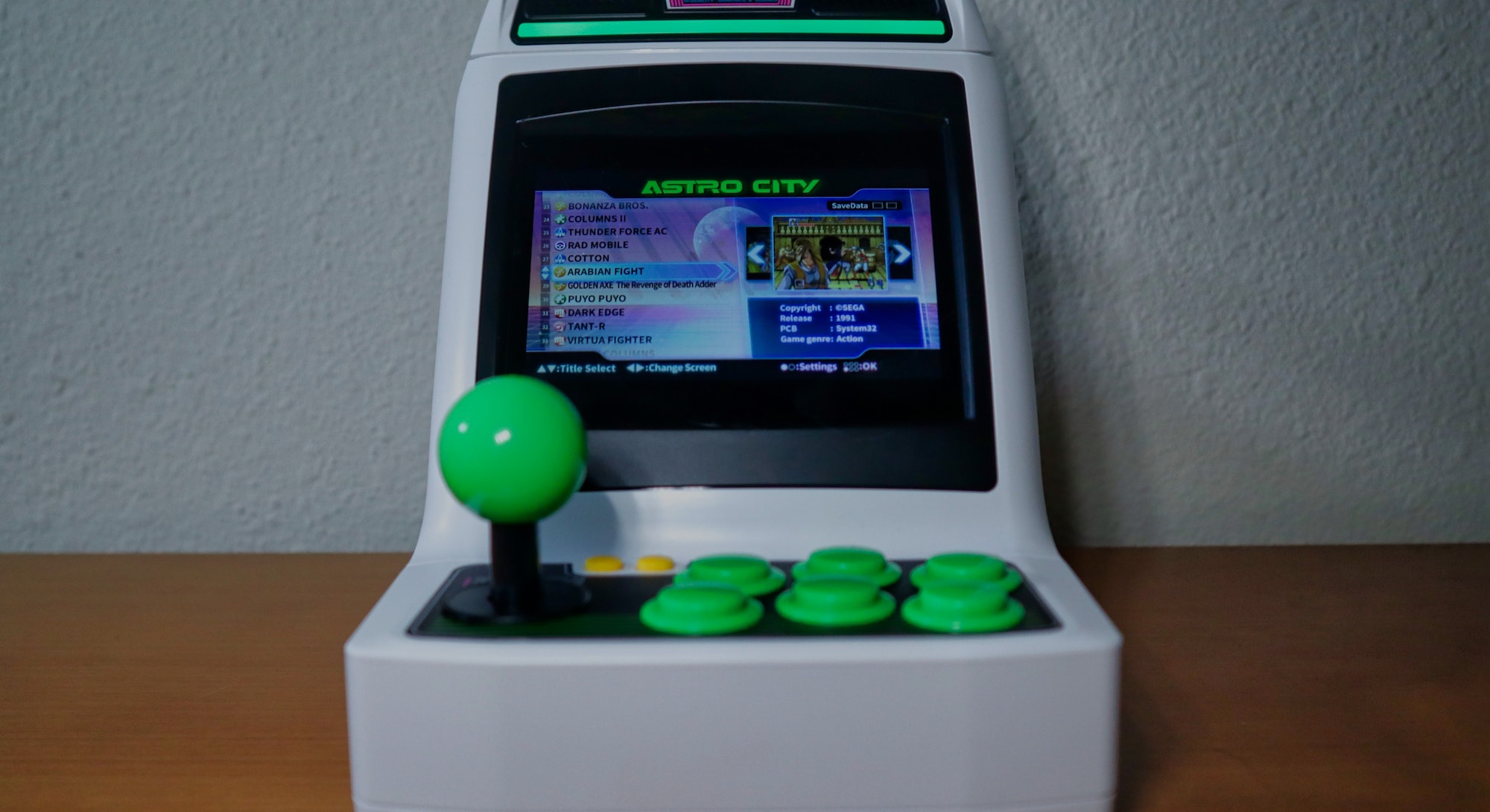 Like the baby-sized Game Gear Micro before it, Sega Sammy announced the Astro City Mini as a Japanese-only release. That was until Limited Run Games, a games distributor that focuses on releasing retro and indie games, picked up the mini arcade cabinet and released it stateside in March.

The big catch: there were only 3,500 units of the $130 system and they immediately sold out in a day alongside the Astro City Mini gamepads. The 40 style kits, which come with a miniature stool, cabinet riser, and marquee, were snatched up in seconds (LRG didn’t sell the arcade stick).

With all my payment information autofilled and a whole ton of luck, I managed to beat the bots and scalpers and snag myself the miniaturized console together with two controllers for $210. Being the huge fan and collector that I am, I was expecting the Astro City Mini to sate my appetite for retro gaming with its 37 included games.

Sega Sammy did a bang-up job shrinking the full-sized Astro City arcade cabinet, which was popular in Japan during the early ‘90s. The hardware is made of high-quality materials and the buttons and joystick are on point, but I found the games library underwhelming compared to what comes on the Genesis Mini. Many of the games may be unfamiliar to westerners and their difficulty and repetitiveness makes them skippable. The best game, Virtua Fighter, is more fun arcade-style than with a controller, and the replay value is high, but it alone can’t carry the console and justify paying resale prices now that you can only buy them from Amazon Japan or marked-up on eBay.

With a crisp screen and a full HDMI port that outputs a clean picture, at least these games look better than ever.

The Astro City Mini is easily one of my favorite retro systems in terms of design. It’s authentic to the original arcade in nearly every way and it shows. The matching lime green buttons and joystick are spot-on and small details like the decals on the sides and top are solid touches; Sega could have cheaped out on the design, but it didn’t. The Astro City Mini isn’t meant to be portable so it doesn’t have a built-in battery, but if you really want to, you can power it off a battery bank — the system requires a 5V/2.0A power supply.

Games look great on the 3.9-inch (800 x 480 resolution) LCD screen, though the 16:9 ratio is an odd choice considering all the games are set to 4:3. Thankfully, games don’t stretch to fit the longer screen, but the downside is pillar boxing (black bars); you can pick wallpapers to cover them up. Of the two wallpapers, the Astro City-themed one looks the nicest on the small screen. Be warned though: outputting it to a monitor stretches the wallpaper out and makes it ugly. If the screen is too small, the console has a full-sized HDMI port that outputs a clean picture either in 480 or 720p resolution depending on the game; I plugged it into my computer monitor and everything looked great. Virtua Fighter displays at 720p when hooked up to a TV or monitor and it looks the best when output in my opinion.

Sega could have cheaped out on the design, but it didn’t.

The quality of the joystick and buttons pushes the Astro City Mini over the top. The joystick uses microswitches and clicks audibly when used, making it feel like a genuine arcade joystick. The six buttons are equally responsive and produce satisfying clicks. I thought at first the controls would feel too cramped, but they’re not. It might get tiresome playing for long stretches hunched over the Astro City Mini, though. That’s where the Astro City Mini gamepads come in. The controllers match the aesthetic down to the color and weird text by the start and select buttons. The rotating joystick-like D-pad is smooth and the concave buttons are comfortable with every press. I love that the controllers can be used to play retro games on a PC — it's just plug and play.

Compared to SNK’s NEOGEO Mini, a mini arcade cabinet in the same price range, the Astro City Mini has the superior hardware. There’s no competition. Where the NEOGEO Mini beats the Astro City Mini is games selection: they’re straight-up classics from the Metal Slug, The King of Fighters, and Samurai Showdown series. Sure, most of them are fighting games (it is SNK after all) but they slap. The Astro City Mini, though? Not so much.

The Astro City Mini has the occasional banger, but the rest of the list reads like an NFL team’s pre-season game roster. What bothers me the most isn’t the lack of well-known games, but that they’re frustratingly hard. Arcade games are hard because they’re designed to make you spend more quarters. But even with built-in save states and unlimited credits, the cheap quarter-munching tactics are annoying. In games like Cyber Police ESWAT, dudes randomly start blasting from windows above, and shoot ‘em ups (shmups) like Cotton: Fantastic Night Dreams spawn enemies that fly in impossible-to-avoid patterns. Apart from being unfairly hard, many games are boring. I don’t expect them to compete with modern games, but they feel like relics that are better left forgotten.

Apart from being unfairly hard, many games are boring.

For gamers that want to play the original arcade versions, though, the system has several arcade-exclusive games that are playable for the first time the way they were intended to be experienced. That adds a ton of value for collectors. Golden Axe: Revenge of the Death Adder was never ported and is finally playable for the first time ever outside of arcades. Other games like Virtua Fighter, Cotton: Fantastic Night Dreams, and Rad Mobile have been ported to other consoles before, but their arcade versions have never been released until now.

Virtua Fighter is hands-down one of the best games on the Astro City Mini. While it was a technically impressive title when it launched in 1993, like most early 3D games, the blocky polygon graphics don’t hold up as well as 16-bit games from the same era. Still, the tight, responsive controls and fluid movement give it tons of replay value and more than make up for the graphics. The game is even better with another player in co-op mode — the gamepads shine here.

Another good game is Thunder Force AC, a port of the Genesis game Thunder Force III, which I played for the first time on the Genesis Mini and loved. The port makes a few changes, but it’s essentially the same game with additional content not found in the original. The tough-as-nails shoot ‘em up never feels cheap, but it’s a challenging, hand-cramping experience reserved for the most hardcore. Thunder Force AC is the best-looking game on the Astro City Mini. Its stunning 16-bit graphics don’t look outdated at all and make me yearn for the golden era of sprite-based gaming.

Other games such as Arabian Fight, which uses sprite scaling so well that I was taken aback at the faux-3D appearance, are technically impressive. Sprite scaling changes the size of sprites relative to their location on screen to make them appear closer or further away; it essentially gives 2D spaces a 3D feel by creating artificial depth. Other games such as Rad Mobile and Dark Edge also use sprite scaling well. Though beautiful to look at, these games don’t deliver on gameplay if you ask me.

As eye-catching as the Astro City Mini is, its games ultimately are a letdown. Virtua Fighter, Thunder Force AC, and even the Golden Axe games are all entertaining, but they make up only a fraction of the 37-game library. A catalog which, for some bizarre reason, includes three Columns games and two Puyo-Puyo games. I just know that there could have been other titles more deserving of an appearance on the Astro City Mini. Hackers have yet to mod this retro mini system so there’s no taking matters into my own hands and improving it (yet). Someone on Twitter mentioned that there was a YouTube video floating around where somebody added ROMs to the console, but I haven’t been able to find that source and confirm it.

When Limited Run Games announced its distribution on Twitter, I jumped at the chance to buy the Astro City Mini. But honestly, I could have just bought the Japanese version to begin with. Sure, my Astro City Mini has English packaging, but it turns out seven of the games are fully in Japanese and another eight have some Japanese text (mixed in with English menus), despite the company claiming all games would be in English in a now-deleted Tweet. The Japanese games weren’t a problem for me since arcade games are simple to understand and play. However, puzzle games like Tant-R and Ichidant-R are even more challenging to play if you don’t know the language. Regardless, this localization mixup led to some controversy and turned many people off.

Hackers have yet to mod this system so there’s no taking matters into my own hands.

Others were salty about Limited Run Games’ extremely tight stock of 40 style kits, but it was the missing arcade stick that disappointed me the most. The company’s logistics and customer service were hassling, too. I had a problem with the delayed shipping and the company failed to update buyers on the changing ship date even though items were “on-hand” when I bought them.

Even with its questionable games, the Astro City Mini has found a special place in my growing gaming collection. However, it’s not for everyone, especially now that you can only get it at resale prices or from Japan. The Astro City Mini has collector’s value, serving as a digital museum of Sega’s arcade past and even more so with the addition of the previously-unreleased Golden Axe: Revenge of the Death Adder. But unless you’re really nostalgic for the games or you're a collector, it’s probably best to spend your money elsewhere than on expensive import fees.

The game selection might entice old-school gamers who cut their gaming teeth in dimly-lit arcades, but there’s not enough meat on the bone for me and my home console-playing ilk. Sega set the bar high with the Genesis Mini, but just like its brief dominance in the ‘90s, the company’s ideas prove it’s a one-trick pony. Sega is good at following trends not advancing them.