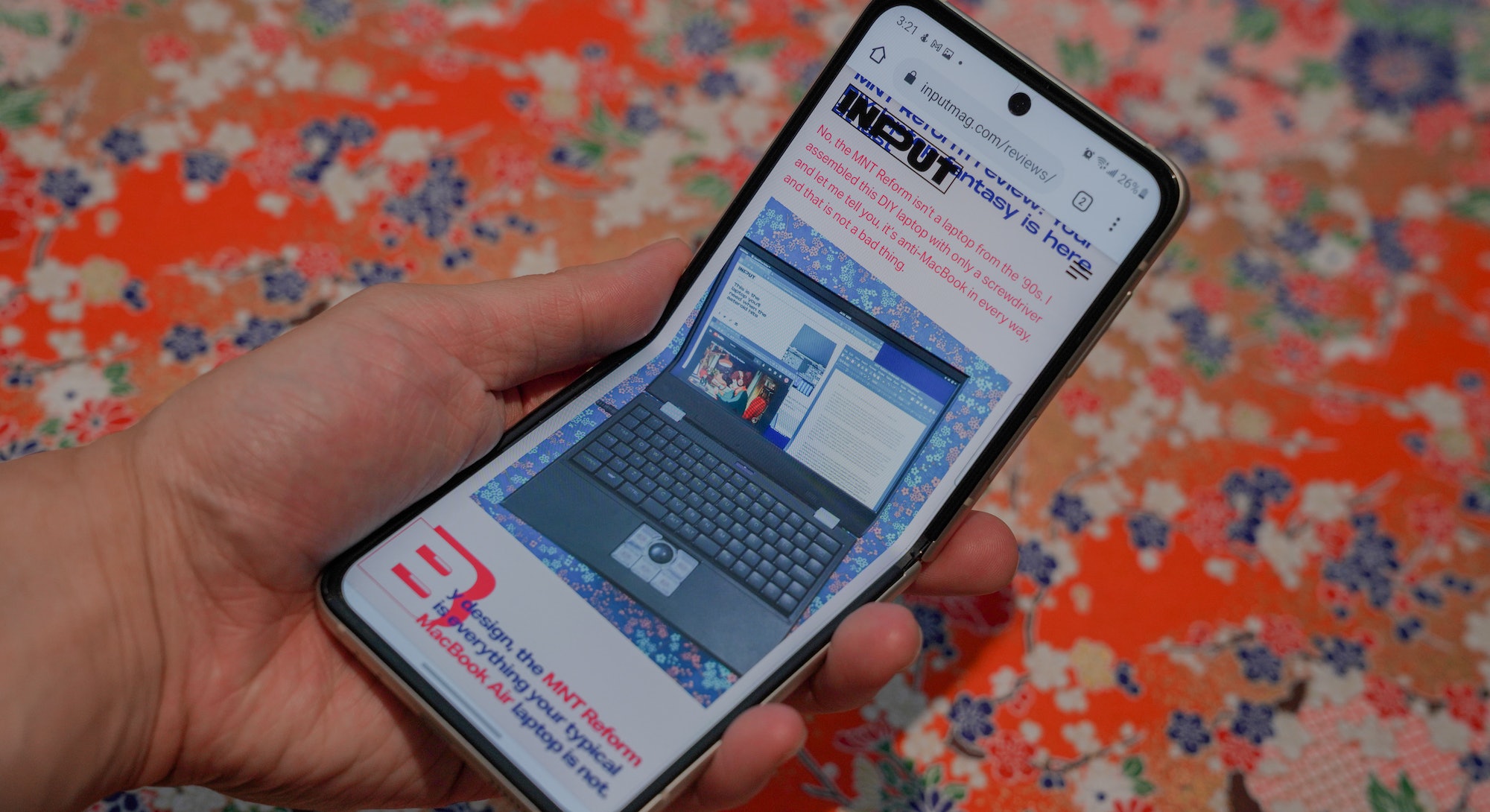 Samsung is not backing down from foldables.

In spite of lukewarm reception and durability issues with foldables the past two years, Samsung is charging full speed ahead with its latest Galaxy Z Flip 3 and Galaxy Z Flip Fold 3 foldable phones.

A year ago, the Z Flip 5G launched at $1,449 — an absurd amount of money for what essentially boiled down to a folding trick. A full rotation-and-a-half around the sun and we now have the Galaxy Z Flip 3, which starts at $999.

The $450 price drop alone makes the Z Flip 3 more attractive compared to other $1,000 phones that don’t fold. But thankfully, there’s more than just a screen that bends in half this year. The cover display is considerably larger and more useful; the phone’s IPX8 water-resistant; and the foldable screen is more durable and has a much more fluid 120Hz refresh rate. And the colors (and case accessories) are *chef’s kiss*.

The jury is still out on whether or not foldables are here to stay or a passing fad. In 2021 (so far), though, no other phone is as adorable or exciting.

Samsung's Galaxy Z Flip 3 5G is the mainstream foldable we've all been waiting for.

It’s maybe safe to say that Samsung has successfully made its foldable phones durable enough to withstand daily wear. I say maybe because many people spent the past year at home, which means there weren’t many opportunities for Samsung foldables launched in 2020 to inexplicably fail in unpredictable outdoor scenarios. I’m not saying there have been no broken or defective Z Flips, only that there weren’t any large-scale defects that would have sparked outrage.

That’s a good thing because it means that durability — the biggest concern about foldables — might not be anything to worry about anymore. That doesn’t mean Samsung’s resting on its laurels. On the contrary, the Z Flip 3 is more durable — as it should be. The sleek glass-and-metal body is stronger than before; the Z Flip 3 is using Corning Gorilla Glass Victus on the outside which is 50 percent stronger than Gorilla Glass 6 and aluminum that’s 10 percent stronger than on previous foldables.

I haven’t conducted any drop tests — I’ll leave that to the overzealous YouTubers — so I can’t verify the upgraded durability. The new feature that I can verify to normal usage is the IPX8 water resistance. The X means there’s no dust-resistance IP rating and the 8 means the Z Flip 3 can survive submersion in 4.9 feet (1.5 meters) of water for up to 30 minutes. To test the water resistance, I took the Z Flip 3 outside during Hurricane Henri’s torrential downpour over the weekend and — spoiler — it didn’t break! The narrow gap when the Z Flip 3 is folded up will inevitably pick up dust and lint from your pockets, but the screen protector and a case can help with that.

Samsung also strengthened the screen protector that’s pre-installed on top of the foldable display. I am not a fan of screen protectors — okay, I hate them — but in the case of the Z Flip 3, you really should keep it until it starts peeling at the edges. Samsung claims this protective film is 80 percent more durable. It’s definitely a little bit tougher, but the film can still leave marks if you apply even the gentlest of extra force with your fingernails. So be careful.

Normally, I’m anti-case. But again, because protection is the top priority when it comes to foldables — replacement foldable screens are horrifyingly expensive — I’d recommend one. For once, Samsung’s official cases aren’t lame. The “Silicone Cover with Ring” silicone case in orange that Samsung loaned with the Z Flip 3 can only be described as fire. I’m not one to hang my phone on a backpack or carabiner with my keys so the case’s ring doesn’t serve its intended purpose. However, I found it useful to slide my index or middle finger through it as a security mechanism of sorts — kinda like those PopSocket-like cases with the rings attached to them. For $40, this case rules.

Samsung’s got other cases with a strap attached to it, which is for securing the phone in your fingers and those are equally cool, too.

The 6.7-inch foldable display got upgraded with 120Hz and you can feel it. Animations and scrolling are on a different level of smoothness compared to 60Hz. I love it and you’ll love it. Though the foldable display has a more durable protective film, Samsung has not figured out how to eliminate the crease. It’s still very visible if you look at the foldable display from side angles and you can feel it whenever you swipe over it, but at this point, it’s a compromise I don’t see going away any time soon. Accept it or don’t get a foldable.

These upgrades are welcome, but it’s the larger cover display that steals the spotlight. On the Z Flip and Z Flip 5G, the screen was a tiny 1.1-inch (300 x 112) display made for ants. On the Z Flip 3, the cover screen is 1.9 inches (512 x 260) and actually usable. In addition to showing the date, time, and battery life, the screen is large enough to show notifications that you can swipe away, music controls you can tap, incoming calls you can accept or reject, the weather, alarms/timers, your day’s schedule, and steps from Samsung Health. You can also use the cover display for taking selfies or recording vlog-style videos — surprisingly useful and not gimmicky compared to struggling with an unwieldy brick of a phone.

I particularly love the clock with the different animals on it; a yellow dot appears to the left of each animal whenever you have notifications and it sorta looks like a little poop. Come on, that’s funny, even if it wasn't intentional!

The cover screen still isn’t as large as the 2.7-inch cover display on the Motorola Razr 5G, but that phone is a disappointment in more ways than one. Lenovo, which owns Motorola, simply hasn’t invested in the durability of the foldable Razrs as much as Samsung has in the Flip and it shows.

Coupled with the 120Hz refresh rate, Android 11 with Samsung’s One UI 3.1 is as fluid and responsive as on Samsung’s Galaxy S21 and S21 Ultra. I encountered no crippling bugs that suggest performance isn’t up to snuff. Even 3D games like Genshin Impact and Asphalt 9 run great. The Z Flip 3 gives off more heat versus more casual games like Among Us or emulated games in RetroArch or PizzaBoy, but that’s the case on other phones, too.

While the Z Flip 3 works as well as a regular non-folding phone when it’s unfolded, I can’t say the Flex mode feature — activated when unfolding the phone halfway — is any more compelling than a year ago. It still feels half-baked. This time in addition to optimized apps like YouTube that can show content on the top and bottom, there’s a Labs feature that lets you force apps to use Flex mode. You can choose which apps you want to do this within the Settings app, but the sad reality is that most apps that aren’t natively optimized just get squished to display on the top half. For media apps, you’ll get some playback controls like play / pause, skip / forward, and scrubbing. But mostly, you get a bar of four controls: shortcut for Quick Settings, screenshot button, brightness, and volume controls.

The good thing is you’re not forced to use apps in Flex mode. Still, the fact that Samsung hasn’t come up with more creative or intuitive app experiences for what’s essentially a dual-screen interface makes me wonder if there are any at all. What if this is it? Running two apps simultaneously or a few apps that are optimized for Flex mode. Unless all phones steal the Z Flip 3’s form factor, it’s unlikely many developers will rework their apps for Flex mode.

Battery life is easily the Z Flip 3’s most notable downgrade. I noticed the drop immediately. Whereas I got 5-6 hours of screen-on time with the Z Flip, I averaged about an hour less using the Z Flip 3. Even after almost two weeks of use, the battery life never normalized.

There are multiple areas to pin the blame on: 5G, the 120Hz refresh rate, the larger cover display. Whatever the culprit(s), the fact remains: the battery life will have you running to an outlet sooner rather than later.

In theory, the Z Flip 3’s foldable design can be seen as a way to discourage phone use, and thus should increase battery life since you’re curbing your TikTok or Instagram addiction. In reality, all the folding and unfolding zaps just as much battery life as a regular phone.

Sure, the Z Flip supports 15W fast charging, but surprise (or not surprise): there’s no fast charger included.

I didn’t have the original Z Flip 5G on hand to make any direct camera comparisons. Not that it would have made a huge difference since the Z Flip 3 has the same cameras as the Z Flip 5G — back and inside.

There are a total of three cameras on the Z Flip 3. A dual-lens camera system on the back made up of a 12-megapixel f/1.8 main with OIS and 12-megapixel f/2.2 ultra-wide shooter, and a 10-megapixel f/2.4 hole-punch selfie camera inside. If there are any improvements between previous Z Flip generations, it’ll be down to image processing.

I know some people are unhappy that the cameras aren’t using the latest and greatest image sensors like on the Galaxy S21 Ultra, but I’m of the opinion that if the cameras were good a year ago, they’re likely still good. And to me, the Z Flip 3 cameras are good enough. They produce very Samsung-like photos. Colors are still slightly more saturated than on iPhone and the HDR can go a little overboard exposing highlights and brightening up shadows. But overall, the cameras take great photos.

I said a year ago that the Z Flip wasn’t ready for primetime. The Z Flip 3 is almost ready. Its biggest drawback is battery life. There are workarounds to improving it like turning 120Hz and / or 5G off or lowering the brightness, etc. No Z Flip 3 owner should have to do this, but low battery anxiety was a concern for me.

If you’ve been on the fence, waiting for Samsung to sort out the early adopter shortcomings that often come with cutting-edge technology like foldable phones, you can hop off now because the Z Flip 3 is good enough and affordable enough for me to recommend. The Z Flip 3 is the most fun phone I’ve used all year. And fun really is the play here — the magic of a glass display that bends in half remains the Z Flip 3’s biggest selling point.

Who knows if the Z Flip series will put foldables on the map. Ask me again in a few years. What I do know is that Samsung is hell-bent on making foldables mainstream just like it was with phablets and curved glass edges. Right now, foldables are the only innovation that greatly differentiates Samsung phones from iPhones on one side and the onslaught of Chinese phone companies like OnePlus and Xiaomi on the other. Samsung needs the Z Flip 3 to work.