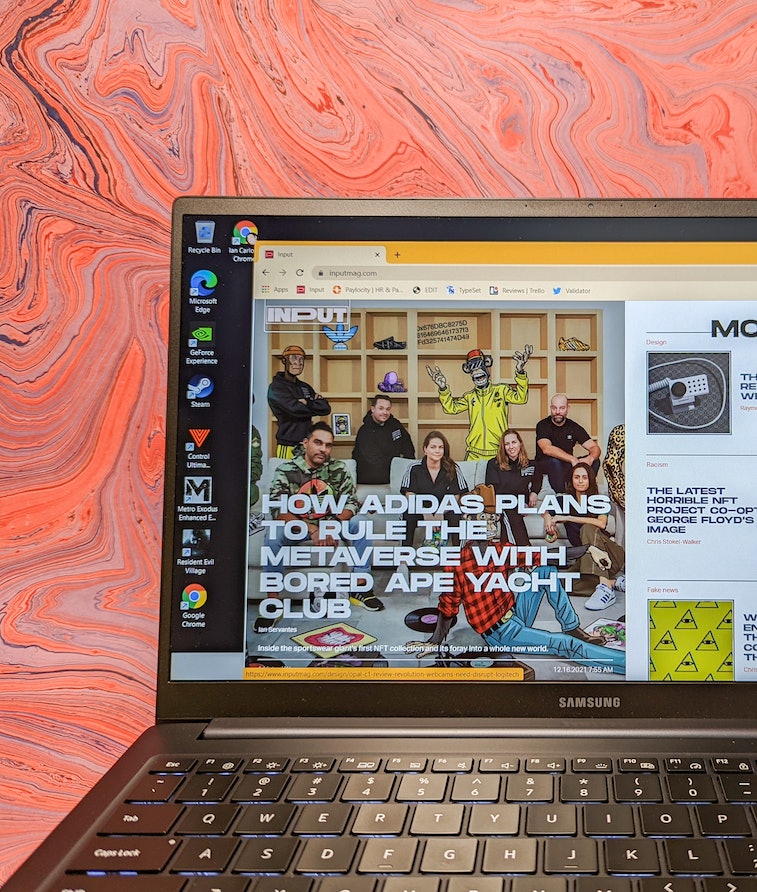 Samsung’s 2021 Galaxy Book Odyssey, like many laptops, is a story of compromise.

The latest Samsung professional, gaming-focused (choose other power-oriented descriptors as you see fit) laptop features H-series 11th generation Intel processors for “desktop-caliber gameplay, creation, and mobile workstation productivity,” according to Intel, but the truly exciting inclusion might be the Nvidia RTX 3050 Ti. That’s a laptop-friendly version of one of Nvidia’s RTX graphics cards, an inclusion that suggests the Galaxy Book Odyssey should be a capable gaming machine, on top of working great for work and creative tasks.

The reality… is a bit more complicated.

From the perspective of basic curb appeal, the new Galaxy Book Odyssey is plenty nice. My Mystic Black (“mystic” seems to mean “blueish”) unit is surprisingly thin at a little over half an inch (technically 0.7 inches) and weighs only a bit more than I’d like it to at four pounds. The aluminum body is a nice touch, too. The finish in black picks up more fingerprints than I’d like, but it feels appropriately premium for a laptop over $1000. It’s also nice and cool to the touch until you start putting it through its paces.

Samsung also includes plenty of ports: three USB-A 3.2 ports, two USB-C ports (neither are Thunderbolt per Samsung’s documentation), an HDMI port, an Ethernet port (!), a headphone jack, and a microSD card slot. Other than swapping that microSD card slot for a full SD one, I’d say the Galaxy Book Odyssey has everything you need to Get Stuff Done.

Like Samsung’s smartphones, the Galaxy Book Odyssey comes with a certain amount of polish. The device isn’t garish, edgy, or decked out in RGB like plenty of gaming laptops. The top part of the laptop case that holds the screen has an almost two-step design — the edges dip down into the center where Samsung’s Odyssey logo resides. It feels like a strange thing to nitpick, but I really don’t like the Odyssey logo. I know Samsung wants to differentiate its gaming and creator-focused products from the more traditional business and consumer Windows laptops and Chromebooks it offers. But I would have been happy with a simple “Samsung” in the corner. The Galaxy Book Odyssey “O” just seems out of place.

The Galaxy Book Odyssey’s keyboard is large and sits next to its Dolby Atmos-capable speakers. Personally, I’d trade the included numpad for even larger, better speakers, but I understand people like having extra keys for games with plenty of hotkeys or optional keybindings. Because of the numpad, the Galaxy Book Odyssey’s trackpad is off-center. I totally get that this is standard practice, but I never got used to it. The trackpad also doesn’t really compare to what you’d find on something like the 2021 MacBook Pros in terms of smoothness or ease of use. Not terrible by any means, but it doesn’t feel as high quality as Samsung’s other touches.

The polish and refinement extend to Samsung’s own pre-loaded Windows apps, which translate its One UI design language to Windows 11. I really don’t mind it! I’ve never used a One UI phone full-time, but I think the large text and icons, and generally, more visual and inviting design, works well with Windows 11, which already tries to be way more readable from a distance than past versions of Windows.

Samsung’s apps can help you transfer your data from one Galaxy Book to another, view photos stored on your Samsung phone, and enable a Spotlight-clone called Quick Search (Windows 11 already does this more or less). They’re all fine, but probably most useful for people who are already deep in the Samsung ecosystem. The one Odyssey-specific app, Odyssey Control, allows access to the kind of stats I expected I’d have to monitor on a gaming PC: CPU, GPU, and memory usage, along with the current fan speeds. The real interesting trick was Odyssey Mode, which allows you to tweak the Galaxy Book Odyssey’s 15.6-inch LED display between different settings for different types of games.

FPS “adjusts the dark areas to see the enemy more easily,” RTS “emphasizes colors for high visibility of the game screen,” RPG “applies blue light filter for more comfortable viewing,” and AOS “adjusts the contrast ratio to improve visibility.” I really loved how the display looked with these settings disabled, but it’s cool Samsung provides the presets as an option.

Full disclosure: while I’ve often threatened to build my own gaming PC, and lusted (respectfully) after other folks gaming laptops, I’ve never pulled the trigger on getting one for myself. That’s part of what made the Galaxy Book Odyssey enticing to me. I might not be much of a creator (I at most, edit a few photos, type a few text documents, and occasionally strip the audio out of some video clips), I am someone who’s interested in exploring the wide world of PC gaming. The Galaxy Book Odyssey seemed like a tasteful, no-fuss way of dipping a toe. That’s proven to be both true and not true.

The Galaxy Book Odyssey was able to play everything I threw at it. Whether it was new releases like Forza Horizon 5, Halo Infinite, or Resident Evil Village, or older titles like Metro Exodus or Minecraft, the Galaxy Book Odyssey threw on its somewhat loud fan and trundled along. And that’s working on high settings too. Visually intensive games like Control definitely struggled, though, chugging and stuttering on high settings, and even dropping frames on medium, which was also about where Nvidia’s GeForce Experience app recommended things be set.

In general, I’d say if you’re looking for the high-resolution, 4K, and ray-traced experience I personally associate with PC gaming, the Galaxy Book Odyssey can offer it, just generally at not anywhere near a consistent 30 or even 24 frames per second. Like we speculated when Samsung announced this laptop, this is very much a 1080p, medium settings kind of device. You can push it and it’ll handle it — through the dull whine of an omnipresent fan — but you’re best babying it a bit. Disappointing for me personally, but realistic given the Nvidia RTX 3060 Ti, Intel Core i7, and 8GB of RAM in the model Samsung provided for review.

My constant companion throughout this entire experience was the Galaxy Book Odyssey’s fan. It’s an exaggeration to say the fans are running all the time, but the Galaxy Book Odyssey does try and cool aggressively, even outside of the context of gaming or resource-intensive creative tasks. One of the first things I did was download Chrome and start browsing. Yes, I know Chrome isn’t exactly the lightest or most power-efficient browser, but the Galaxy Book Odyssey almost immediately got that fan going once I started rocking multiple tabs. It knows its limits and cools accordingly.

If I can stress anything about the Samsung Galaxy Book Odyssey, it’s to know what you’re getting yourself into. If you want something that can play new releases at the highest quality and settings, there might be a dedicated, more explicitly gaming-focused device that works better. The Galaxy Book Odyssey is really more for work and creative tasks first, with a little gaming on the side. Also, at its size, weight, and general battery life, it’s going to work best plugged in and on a desk rather than on your lap on the couch.

...more for work and creative tasks first, with a little gaming on the side.

This is one of the core tensions of gaming laptops to me. I associate portable devices, and laptops in general, with someone who is comfortable being more hands-off. You sacrifice some of the customizability of desktop gaming PCs, for portability and the ability to use something without having to worry about digging into the settings. To squeeze out the kind of performance I wanted from the Galaxy Book Odyssey I had to dive into settings, and I had to think about where I wanted to work and play from. Not exactly hands-off or no-fuss in the way I wanted or expected. The Galaxy Book Odyssey features a beautiful screen, more than acceptable performance, and a design that comes off as elegant in comparison to plenty of popular, over-the-top gaming laptops. It’s just also illuminated for me that this isn’t how I want to do PC gaming on the go. That answer might lie with Valve’s Steam Deck, but we’ll have to wait and see.

The Galaxy Book Odyssey is not the laptop for me, but that doesn’t mean it can’t be the one for you, provided you’re comfortable knowing its limits and focusing more on the business side of thee laptop than its gaming chops alone.