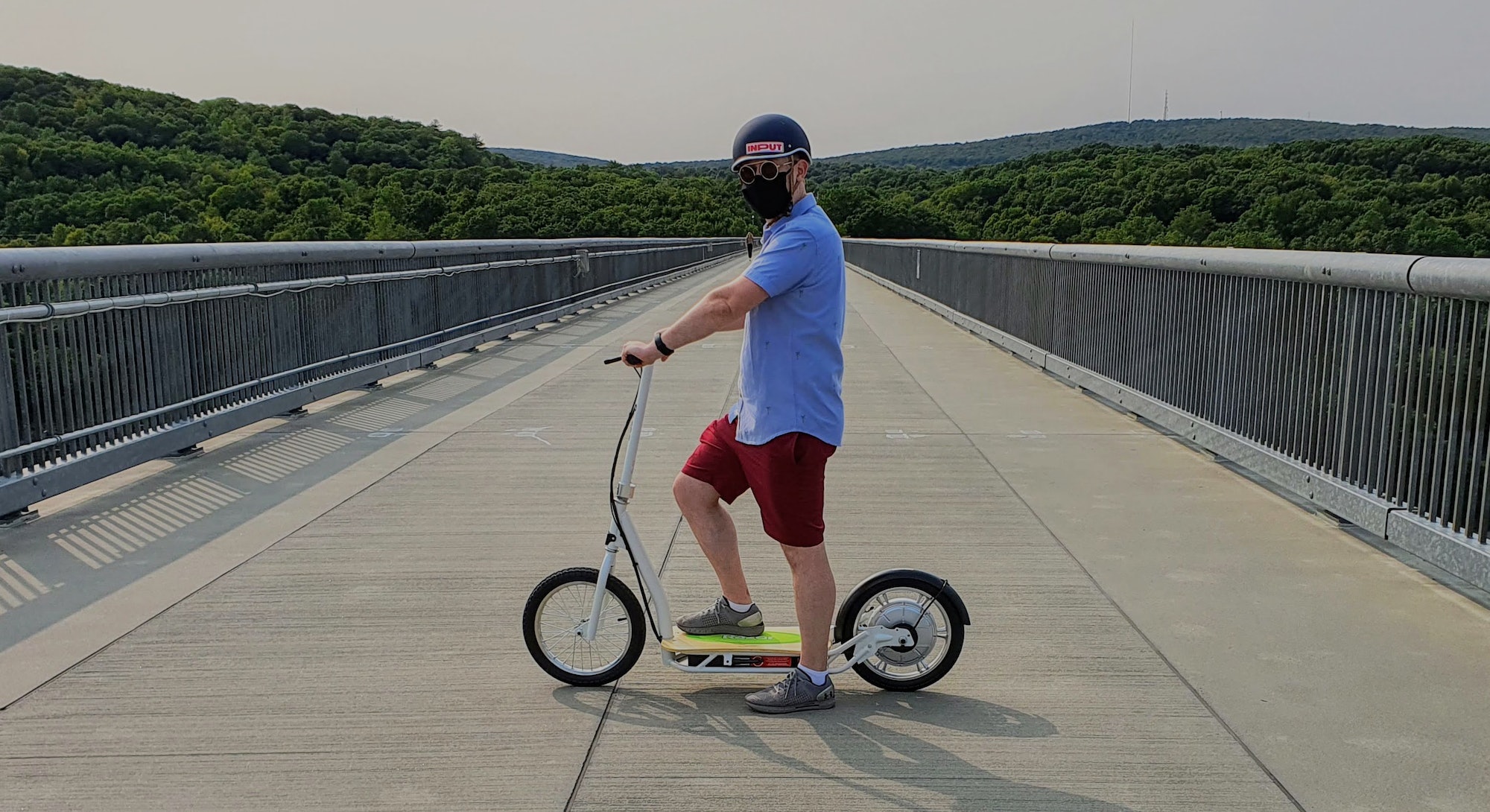 Razor’s well-known for its wallet-friendly kick scooters and e-scooters, and having been in business for 20 years, it’s one of the oldest players in the sector.

Earlier this year it released a handful of new electric scooters all priced under $500 and all with a range of about 12 miles. When I got offered the chance to review one of the latest offerings, I jumped at it. My selection? The EcoSmart SUP, which addresses one of the biggest failings of most e-scooters: the habitually tiny wheels.

The EcoSmart SUP has 16-inch pneumatic tires of the sort usually found on folding bicycles. That means there's the risk of punctures, and you have to check the tire pressure every couple of weeks. But it also makes for easy maintenance and — far more importantly — a more forgiving ride than the puncture-proof (but, inevitably much smaller) tires found on most e-scooters. It also significantly improves your odds of rolling over stealthy potholes unscathed.

As my colleague Evan Rodgers will attest, New York streets are gnarly, so what you really want is suspension on anything with two (or more) wheels. But failing that, bigger wheels filled with air are the next best thing.

Razor’s chosen a steel-tube frame for the e-scooter and topped the hefty 36-volt battery and 350-watt motor with a bamboo deck that’s coated in the sort of grip-tape you’d find on a skateboard deck. The EcoSmart SUP’s deck is wide enough for the rider to stand with their feet side-by-side, rather than one in front of the other like on most e-scooter. That makes for an even more comfortable ride, though I do have to wonder about the durability of the bamboo in the long run and its ability to withstand dirt. My test unit picked up scuffs and marks pretty quickly.

The stand-up version of the EcoSmart Metro with the same 16-inch pneumatic tires for the smoothest ride and a 36V battery that's good for up to 12 miles or 60 minutes of continuous riding.

The Razor EcoSmart SUP arrived in a huge box and required some assembly. The handlebars had to be connected to the steering column and the front-wheel had to be attached. The whole process took less than 10 minutes, and the required tools were included in the box. Multiple, brightly colored bits of paper warned that it was essential the battery be charged for a minimum of 12 hours before use and the tires be filled to the appropriate pressure.

Charging happens via a port on the left-hand side of the battery pack that sits beneath the deck and resembles an XLR port, and there’s an LED on the power brick that indicates when the battery is fully charged. Razor recommends charging the battery between every ride.

Turning the scooter on is done via a switch next to the charging port and, unlike some scooters that require a push to get going, the EcoSmart simply requires a twist of the throttle on the right-hand side of the handlebar to take off. And take off it does thanks to the 350-watt hub motor that powers the rear wheel. While lots of fancier e-scooters have settings for different speeds or electronic limiting, the Razor forgoes those — it’s simply on or off.

The brake is similarly rudimentary. It’s a grip-style system on the left-hand side of the handlebars, and like the throttle, it lacks subtlety. Twist the throttle and the acceleration curve is steep, getting you to the 15.5 mph top speed in what feels like well under 10 seconds. Hit the brake and you’re going to want to lean back lest you fling yourself off the front of the scooter.

A screw on the brake caliper lets you adjust the severity somewhat, and a few twists made it feel far less likely I was going to careen off the front when stopping. Nonetheless, it doesn’t take long to get used to these nuances, and assuming you can plan your routes to ensure you don’t exceed the estimated 12-mile range or 60-minute runtime, the lack of a detailed dashboard isn’t an obvious problem. There’s no accompanying app, either. All information is communicated via the colored LEDs next to the throttle. All you really know is when you need to charge it. But then, it's a $450 scooter, so expecting more is a little unreasonable.

The most pleasing thing about the EcoSmart SUP is the quality of the ride. I’ve ridden some scooters that have left my joints aching because they’re so unforgiving when it comes to the slightest bump, crack or (heaven forbid) hole in the road. The SUP feels like something I could ride all day. Except, I can’t… because of the aforementioned 12-mile / 60-minute limit.

In an ideal world, I’d love double the range or a hot-swappable battery, but that would push up the price and defeat Razor’s purposes. The SUP isn’t intended for town-to-town hops. It’s meant for short jaunts to work and back (remember that?), or trips to the grocery store. And for these brief scoots, it shines. But there are some limitations to keep in mind if you’re in the market for an e-scooter and looking to avoid cabs or public transport for the foreseeable future.

Though the charging port has a cover and the larger wheels make it more rain-friendly than most e-scooters, there’s no IP rating for the EcoSmart SUP at all. So I wouldn't recommend riding it in the rain. There’s also no front fender, so if you do you’re guaranteed brown racing stripes up your legs. And there aren't any built-in lights, so if you’re going to ride after dark you’ll need to affix a headlight to the handlebars and consider a helmet with a rear light like this one from Thousand.

But really the key consideration you need to take into account before committing to this e-scooter is where you’re going to store and charge it. First, it doesn’t fold flat and it doesn’t include anything like handles to make carrying it easier. Second, it weighs a little over 62 pounds (!). I live in a fourth-floor walk-up apartment and after convincing my wife to help me carry it upstairs, assemble it, and carry it back down again, I was disinclined to ever bring it upstairs again. (I can't say it was fun when the handlebars got caught on the handrails, either.)

You need to take into account where you’re going to store and charge it.

Instead, I locked it to a sink in the basement with a chain, only to receive an email from my superintendent talking about how “blocking hallways” constitutes “a fire hazard.” In short, if you’re keen on the EcoSmart SUP you better either have a garage, access to an elevator, live near the ground floor, or not be averse to lugging half your own body weight up and down the stairs regularly.

If its dimensions and heft aren’t a problem, you never need to ride in the rain, and you don’t want to drop $1,000+ on an e-scooter, Razor’s EcoSmart SUP is a great choice for $450. Those might sound like a lot of caveats, but I can’t overstate the difference in ride comfort those 16-inch tires make. The EcoSmart SUP is one of the most comfortable e-scooters I’ve ever ridden. It’s going to make it hard to go back to small-wheeled alternatives… but I won’t miss hauling it out of the basement every time I want to ride it.