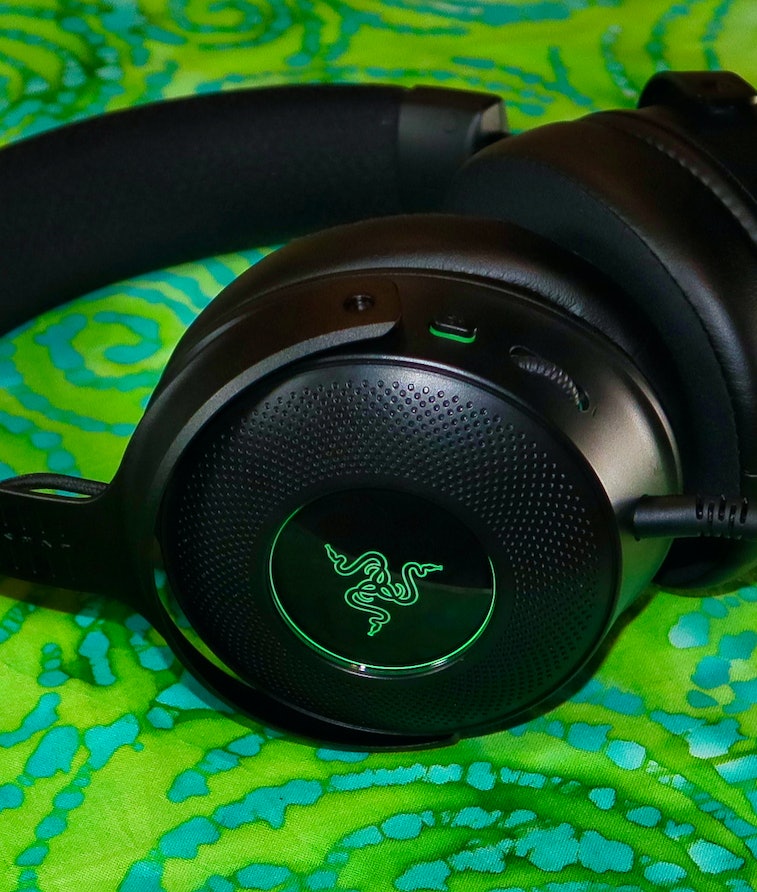 The Razer Kraken V3 HyperSense and Kraken V3 Pro are not like your average gaming headphones.

What differentiates these gaming headsets from the pack are Lofelt’s L5 haptic drivers, which vibrate and give textures to sounds like footsteps or grenades going off. Combined with positional audio, there’s arguably no gaming headset that’s better at making you feel fully immersed in a game, at least not at $130 (Kraken V3 HyperSense) and $170 (V3 Pro).

While HyperSense is not new — the audio tech first appeared in Razer’s 2018 Nari headset — it’s something that sounds like a gimmick until you experience it. But even if you don’t believe in the hype, the Kraken V3 HyperSense is, in my opinion, one of the best headsets for the money.

These gaming headphones come with haptics that literally let you feel your games.

Stacked inside and out

Wired headsets are usually a knock in my book, but after using shoddy wireless headsets that constantly dropped sound, the stable connection was refreshing. With my PC below my desk, the 6.74-foot braided wire is long enough to reach it. My one nitpick is that the cable is fixed to the left ear cup and runs across my body to my PC on the right, which is annoying. Like with the dead-on-arrival Panasonic WIGSS neck speaker, I would have liked the option to attach the cable to either side of the headset. Despite that one minor flaw, the headset is comfortable to use for long stretches, with thick memory foam cushions and a generous band that fits my head without issue, even with my hair grown out.

Compared to most Razer peripherals such as the Wolverine V2 Chroma Xbox controller or BlackWidow V3 Mini Hyperspeed mechanical keyboard, the Kraken V3 is a seemingly low-key affair, despite the larger-than-life name. Chroma RGB makes its mandatory appearance, but it pops more than ever against the all-black design of the headset. The buttons are pared back to just the essentials, pawning off the heft of the features to the software. Beyond the volume wheel and mute button, the Kraken V3 HyperSense and its V3 Pro counterpart, for that matter, have a dedicated HyperSense intensity button that cycles between three levels. Clicking the button past the third and highest level turns off the feature, which you’ll want to do when there’s a lot of dialogue. Though a small feature, it’s something I often use — I lower it in multiplayer lobbies, cutscenes, and while listening to music. The Razer Nari, which also had HyperSense, lacked a similar button, which led to Razer adding it to this headset.

The removable microphone is one feature I really enjoyed. Though I tend to stay off in-game chat, I like that the option is there. And the headset looks much better without the microphone attached. Sure, it’s not as convenient as the retractable microphone on the SteelSeries Arctis 7P+, but it’s still plug and play. As long as you keep the mic nearby and don’t lose it, it’ll only take a few seconds to pop it in and start chatting. The cardioid microphone is sensitive, but the Razer Synapse software can polish off the rough edges.

Sound you can feel

The Kraken V3 looks and feels premium, but it’d be just another headset without HyperSense. With it, the Kraken V3 pushes physical feedback to your ears, and it does a damn good job at it. The headset provided an extra layer of awareness that I had not experienced before, giving me a better idea of what was happening on the virtual battlefield of games like Halo Infinite.

Halo Infinite is a chaotic game no matter which mode you’re playing, but I was able to better discern where sounds were coming from. I could not only hear where shootouts were happening on the map, but I could feel them as well. The tactile feedback can also be visceral. Being blown up by a grenade made the headset shake so abruptly and violently that it almost made me jump out of my seat several times. But it’s not just over-the-top sounds that benefit. In-game sounds pack more of a punch, too.

Infinite’s omnipresent announcer calling out medals feels even more badass (“yard sale” anyone?). One of my favorite Halo sounds — the shield coming back online — felt new again with HyperSense. The physical feedback of the shield reaching max strength not only sounds cool, but also is a sensory advantage. You don’t have to see the shield charging up — you can feel it — which lets you focus more on clicking heads and no-scoping Spartans from across the map.

The headset provided an extra layer of awareness.

HyperSense works alongside THX spatial audio — the audio combo is a match made in heaven. While HyperSense can vibrate to match the sound and alert you of sounds on either ear cup, THX spatial audio can pinpoint sounds coming from behind or ahead of you. Using Razer’s Synapse configuration software, you can manually select which of the three modes (game, music, or movie) you want to work with your content.

HyperSense and THX spatial audio can work separately, but when working in tandem, you’ll feel closer to the action than if you were using a regular headset.

As good as HyperSense works, it’s far from perfect. It works well in some games, such as shooters and action games, but it’s not something you’ll want to use all the time. I found this out the hard way when, after days of solo testing, I jumped in a Halo match with my brother while chatting on Discord. It was immediately obvious that I would have to turn off HyperSense if I wanted to keep talking. Instead of making me more situationally aware, I could feel every word of our conversation, throwing me off completely.

Because HyperSense haptic feedback is translated from an audio source itself, it works on every sound coming from your computer, whether that be a song, movie, YouTube video, or Zoom call. While you can and should download Razer Synapse to configure the Kraken V3 to a specific mode, it’s not required since the headset is plug and play. HyperSense’s binary on or off implementation is a plus for ease of use, but also inadequate if you’re a power user or pro gamer who might want more control; it’s unusable for talking with others in my opinion. There’s no way to make HyperSense react only to in-game sounds and mute everything else. If, for example, some rando on your team decides to start backseat gaming, that means you’ll have to shut off HyperSense unless you want to physically feel their toxicity on your ears.

The other thing is that Hyperense’s three levels of intensity are too far apart. The first level is basically non-existent. You do feel the haptics with the second level, but it’s more similar to listening to a bass-heavy song than anything else. The third level is the only way to really experience HyperSense, but it’s such a leap from the second level that it made me wish for something in between. At times, the third level can get downright uncomfortable, and I routinely shut it off after a few matches to rest my head. The first time I used it, I got a bad headache, and I get like one headache a year on average. I can’t say for certain that HyperSense level three caused it, but I also can’t say it didn’t.

Also, HyperSense sensitivity is relative to the volume, so if you want to crank up the volume, you’re also cranking up the intensity. As much as I enjoyed the feature, it’s not always appropriate, and that’s especially true in games with loud lobby music or tons of cutscenes. If you want to save yourself from the discomfort, you’ll constantly be toggling the feature as you play. That’s not ideal.

Despite the HyperSense feature being too strong and not useful in every situation, there is still a lot to like. Sure, you may have to switch off HyperSense when gaming with others, but that’s a small price to pay for the times when you’re queuing up solo in ranked lobbies. It’s the real deal, and it does for gaming headsets what the PlayStation 5’s DualSense does for controllers.

Still, no words can describe the actual feeling of the headset, which you’ll have to sample for yourself. And if you’re not sold on HyperSense, the Kraken V3 HyperSense is still a great headset whether you use the haptics or not. Unlike other headsets with a ton of buttons, the Kraken V3 HyperSense doesn’t feel like you’re readying for launch. It’s big, but comfortable. And if you don’t talk much when you’re playing games, you can shove the microphone in a drawer. On top of that, the Razer Synapse software is rich with features that can adjust the sound on the headset and how you sound on the microphone. Not to mention, you can also tweak the RGB.

If you were to splurge on the Kraken V3 Pro, I wouldn’t blame you. Wireless headsets are the way to go. But after trying the Kraken V3 HyperSense, I’m not so sure that’s always true. The wired Kraken V3 HyperSense has all the same features as its wireless counterpart at a more affordable price point. For me, it’s the complete package for PC gaming, with a $130 price that’s easily digestible.