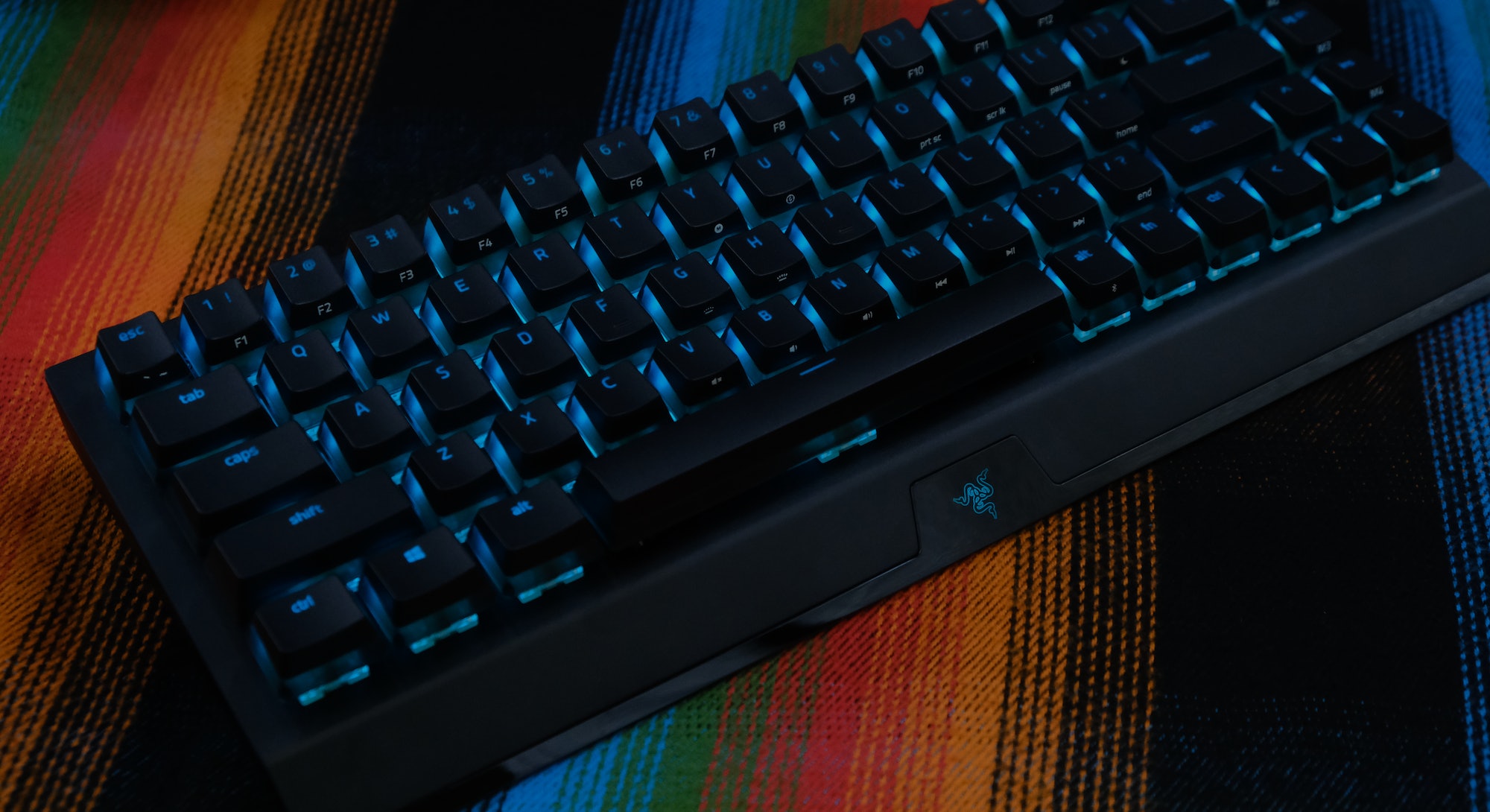 The mechanical gaming keyboard looks great and has a fantastic layout. It’s missing some higher-end features, but it performs well for a broad range of tasks and capitalizes off of an excellent layout and form factor.

More than that, the BlackWidow V3 Mini is a great indicator of the direction that mechanical keyboards are moving in. It’s a mainstream 65% keyboard made by a major gaming company, which suggests efficient enthusiast-grade keyboard layouts are becoming more popular. It’s very much like what has happened over the past few years with the 60% layout as it went from enthusiast obscurity to something even my preteen cousin knows about.

How does it type?

The BlackWidow V3 has two switch options, both of which are Razer’s own proprietary designs: A linear model (yellow) and a clicky model (green). While I spent some time with both, I found myself gravitating to the green switches almost entirely for one key reason: It’s a lot easier to make a clicky switch feel good.

To get a really good linear switch, you need to do a lot: Lubing switches, tuning stabilizers, potentially even filming the housings and bag-lubing springs. Those are all things that are easy to do for one keyboard but incredibly difficult to do on a mass-production scale.

Alternatively, the loud, rough nature of clicky switches makes none of this necessary: The eponymous “click” covers up any stabilizer rattle, and the multi-piece stem construction makes lubing the switches completely useless. Essentially: Stock clicky switches are miles closer to an “ideal” typing experience than linears are.

So then, how does each switch sound and feel?

Razer’s proprietary clicky switches are, if nothing else, better than MX Blues. I know, I know, that’s a low bar. But they do feel good. They have a satisfying click, a fairly light bottom-out weight, and no noticeable roughness, scratchiness, or lagging/sticking after keys are pressed. Plus, they don’t sound too bad — it’s not an amazing “thock,” but it’s not horrendous by any means. While I don’t love clicky switches, and I can’t imagine using this keyboard as a daily driver, there’s nothing explicitly wrong with them if you’re a fan of a louder switch with a stronger tactile bump.

Their linears, on the other hand, are a bit awkward. They feel scratchy, loose, and have a bit of a hollow sound when you type. While they are certainly acceptable, they also bear the rattle of the keyboard’s stabilizers unless you happen to have some lube to apply to the stabilizer’s sliders (something that’s surprisingly easy to do with the sliders’ clip-in system).

Maybe I’m just spoiled by POM housings, JWK clones, hand-lubed switches, and PME, but to the experienced hand, both switches are underwhelming — the yellows much more than the greens.

65% layout rules — As someone who daily drives a 65% keyboard (a Leopold FC660C), I absolutely love the BlackWidow V3’s layout. It’s simple, compact, and pretty much has every key you need as long as you’re willing to add a function layer or two. More than that, it just feels good to use. There are no massive empty spaces and there are no unnecessary keys. I, for one, am incredibly glad to see the 65% layout potentially breaking into the mainstream.

I am incredibly glad to see the 65% layout potentially breaking into the mainstream.

Stealth keycaps — The keycaps look fantastic and really sell the illusion of being blank up until the second the underglow lights come on. Personally, I love it. The phantom keycaps solve the main issue shine-through keycaps had until now: How unpleasant they looked when the LED lights were off. Plus, the fact that they’re pudding-style makes the RGB lighting a lot more visible. If you like a bright keyboard and appreciate a good set of blank keycaps, these will suit your tastes. The only real issue is the white side-legends that quite a few of the keycaps have. While they don’t look horrible, they do disrupt the all-black aesthetic that the rest of the keyboard was clearly trying to go for.

But if these keycaps aren’t to your taste, it’s easy to find replacement keycap sets since 65% keyboards are common in enthusiast circles.

Kinda tall — Besides that, what stands out most is how incredibly tall this keyboard is. Its low-profile case sits about as high as the top of a high-profile case, meaning the switches and keycaps are much higher than they would be on most other keyboards. Of course, a keyboard like this needs to be thick to house all of the components for wireless connectivity, but it’s still worth noting.

Wireless heaven — And in my experience, the wireless option is great: The keyboard has almost no difference in response time between the two, and because the keyboard has a small USB-A wireless dongle you don’t need to worry about Bluetooth pairing. Instead, you simply plug in the dongle and connect instantly. And once the battery runs out, you can plug the keyboard into your computer with the included USB-C cable and use it wired until the battery is fully charged. In my testing, plugged into my desktop, the BlackWidow V3 Mini HyperSpeed took around 2.5 hours to charge up from 0 to 40 percent and around 7 hours to hit 100 percent. It might charge faster with a power adapter going into the outlet, but who’s going to do that?

No hot-swapping — The BlackWidow V3’s main issue is its lack of hot-swap sockets. For a keyboard using standard, MX-style switches at this price point, customization should be an expectation, not a luxury. There are countless keyboards that cost far less than the BlackWidow V3 Mini HyperSpeed that have hot-swap sockets, enough that I would say it’s even becoming a new standard for high-end keyboards.

Overall, the keyboard’s construction is acceptable: The switches are mounted into a metal plate; they’re screwed at 13 points into the plastic bottom case. Because of this, the typing experience feels incredibly stable despite the case being made partially of plastic.

Looking inside of the keyboard, there is a main motherboard attached by two cables to a daughterboard and a battery. A few pieces of foam to prevent unnecessary rattle, and a singular LED tucks behind the logo on the front of the keyboard. While the case material itself is fairly thin, I can understand why here — there’s a lot that has to be packed into this board.

In terms of repairs, it definitely seems possible: Disassembly is intuitive, and from the looks of it, the switches can easily be desoldered and replaced. In addition, the battery and daughterboard can be removed if they need replacement, but I’m not confident that replacement parts could easily be found.

Who should buy it?

If you want a quality, stress-free wireless 65% keyboard that you don’t have to worry about, then yes. But considering the keyboard’s price point ($180 for a standard edition and $200 for the Phantom Edition), there are a few higher-end options (albeit sans-wireless and/or sans-RGB) that you can find for a bit more. For example, the KBDFans TOFU65 and Drop’s ALT keyboards provide full-metal cases, standardized stabilizers, and hot-swap switches.

You’re paying for both the keyboard and its ease of use.

This board is effortless to use, though. The wireless system works with no issues, and customization is incredibly easy with the Razer Synapse tool. In many ways, you’re paying for both the keyboard and its ease of use. Instead of dealing with using a function layer to adjust RGB or a system like QMK to reprogram your board, everything is consolidated into Razer’s own Synapse system, which is both streamlined and incredibly intuitive.

Overall, this keyboard isn’t for everyone. But if you’re looking for a small, attractive keyboard that’s entirely plug-and-play as opposed to the assembly, maintenance and troubleshooting of a high-end mechanical keyboard, then the BlackWidow V3 Mini HyperSpeed Phantom Edition is certainly a good choice for your setup — especially if you’re able to find it on sale.