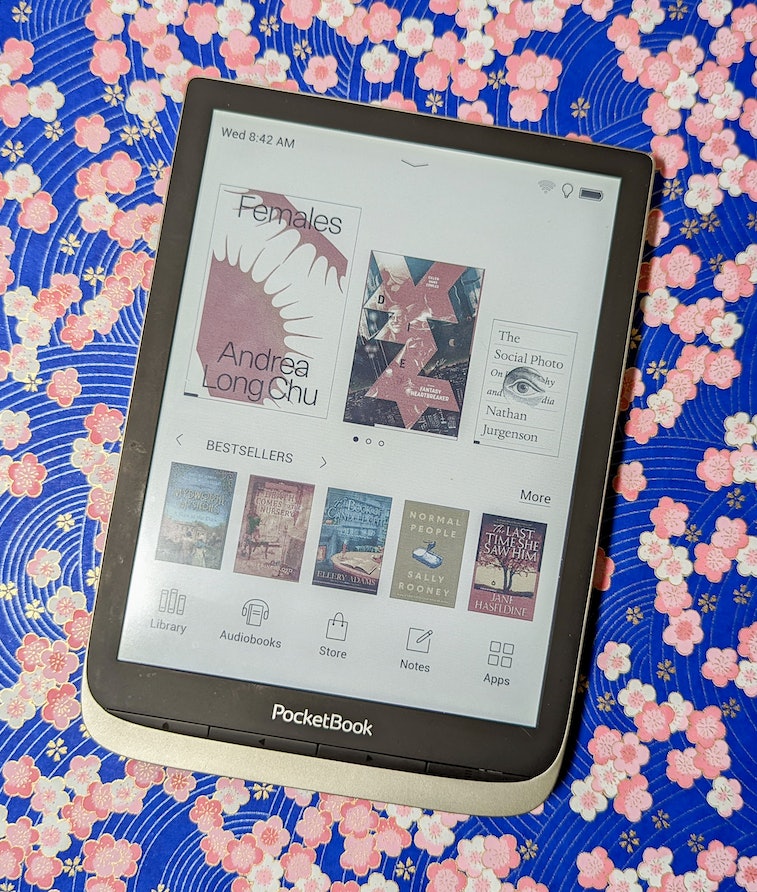 E Ink screens are good at a few, meaningful things.

They’ve proven to be satisfying, paper-like tools for classic non-digital activities like notetaking and drawing. The reMarkable 2 or more recent releases like Kobo’s Elipsa or the Onyx Boox Nova Air are just three of several dozen devices that pair an E Ink screen with a stylus.

Minimalist phone makers have leveraged E Ink to produce devices that are inherently less attractive to use and less hard on your eyes, like the Light Phone II or the soon-to-be-released Mudita Pure.

And then there are e-readers, many people’s first introduction to E Ink and the place where electronic paper still makes the most sense. My mom might not know what E Ink is, but she loves how it looks on her Kindle.

If crisp black-and-white text is so great, it might follow that color should be what takes things to the next level, but it hasn’t quite worked out that way. Qualcomm’s Mirasol project is non-existent, and the E Ink Corporation — the organization that created E Ink technology in the first place — has had multiple attempts at making color E Ink screens work. The newest version of that project is the E Ink Kaelido Plus screen and one of the first e-readers to use them outside of Asian markets is the PocketBook InkPad Color.

An e-reader with one of the newest Kaleido Plus color E Ink screens. The software leaves much to be desired, but the screen improvements are impressive in context.

The new InkPad Color could be an ideal device on paper. It features a 7.8-inch E Ink Kaleido Plus touchscreen in a 195 x 136.5 x 8 mm body. It’s larger than the new Kindle Paperwhite and really closer in size to the 2021 sixth-gen iPad mini. A bit heavier to hold in one hand for an extended period of time, but by no means unwieldy.

Even better, unlike all Kindles save for the Oasis, it has physical buttons. They’re at the bottom of the device rather than on the side bezels where I’d prefer to have them, but it’s a plus. No matter how responsive touchscreens get on E Ink devices, I’d much rather have my finger out of the way of what I’m reading and just press a button to advance pages. Bring back the full keyboard, navigation pad, and page flip buttons on e-readers, I’m ready.

Charging the device is done through a USB-C port at the bottom. That’s also where you’ll find a microSD card slot for inserting whatever reading or listening material you want to shove on the device if downloading them from PocketBook’s cloud service or Dropbox doesn’t already do the trick.

The screen is the real star, and for someone who’s been in the black, white, and grey world of Kindles and Kobos for my last decade of e-reader ownership, it’s quite impressive. The Kaleido screen isn’t as vibrant as the LCD you’d find on the iPad mini, or the mini-LEDs on the new iPad Pros and MacBook Pros, but colors are still discernible and most importantly, welcome when you’re reading outside, the lighting condition where traditional screens start to become a problem.

There’s a sort of filtering effect that makes everything just a bit darker and duller.

This is all relative, because if I could describe the PocketBook in one word I’d probably say it’s dull. I’ve seen other reviewers refer to the colors on the PocketBook as being like a newspaper, and I’d have to agree. They’re clearly there and clearly distinguishable, but there’s a sort of filtering effect that makes everything just a bit darker and duller. Turning up the brightness or taking the device outside helps a ton, but don’t expect LCD or OLED levels of brightness or detail because this can’t match that.

The color experience could be contributed to how the Kaleido screen works, where a thin color filter is layered over the usual electrically activated E Ink pigments to reproduce colored images. It’s an evolution of the Triton screen technology the E Ink Corporation previously developed but designed to better reproduce colors and take up a lot less space. If you’ve been using an older Kindle to read, I think you’ll be pleasantly surprised by how enjoyable looking at comics is on this screen. It’s pleasant overall.

But there is another half

With the realities of the PocketBook’s color E Ink screen in mind, there are some other, more structural issues to consider with regards to content and the actual experience of reading.

Like most e-readers that aren’t made by Amazon or Rakuten Kobo, the InkPad Color has a content problem. There is a store included, but it seems designed for a European audience. Titles are listed with prices in euros and while you can sort by just English language content, it seems like the library is pretty limited. Sally Rooney was the most recognizable author I could easily find.

This shouldn’t be too surprising, PocketBook is a Swiss company, but it does mean that you might be better off sideloading your own content rather than buying what PockerBook has on offer. There again is another problem. Most ebooks I own on other services have some kind of DRM associated with them. An ebook or comic loaned by the library can be transferred to the PocketBook through Adobe Digital Editions (don’t get me started on this gross little piece software) but anything else gets tricky.

If you’ve got the file handy, great. The PocketBook InkPad Color accepts a pretty impressive selection of file types, some of which I was totally unaware of until I started writing this article. These include: ACSM, CBR, CBZ, CHM, DJVU, DOC, DOCX, EPUB, FB2, HTM, HTML, MOBI, PDF, PRC, RTF, TXT. Along with various image files including JPEG and PNG, and audio files like MP4A, MP4B, OGG, and MP3. The thing is, I don’t have a little cache of ebook content on hand. Everything I own is tangled up in one platform or another.

Take for example Comixology, the comics platform owned by Amazon. Comixology has a great app for phones and tablets, and even offers the ability to download PDF and CBZ backups for use on other devices at the publisher’s discretion. I’ve got an eclectic collection of Marvel Comics and some of the bigger titles from Image Comics like Saga, Die, and The Wicked + The Divine, but only a precious few were available to download and use elsewhere. The same issue extends to Amazon’s Kindle Store, where a majority of the content sold is only readable on a Kindle or in the Kindle app. I had to make do with the EPUBs I received with physical purchases from smaller presses and booksellers for my non-comic reading on the InkPad Color.

The actual experience of reading is unfortunately sluggish. I’m not sure where the issue actually is, in the refresh rate of the color E Ink screen, some kind of optimization issue with the operating system, the dual-core processor, or a combination of all three. Whatever the cause, I often found myself waiting a whole second between pressing the page forward button and the screen refreshing in colorful, image-rich comics. That’s pretty annoying when colorful, graphics-heavy comics are the main reason I’d recommend someone buy this e-reader in the first place. And that’s without addressing the screen size, which is just small enough that to view a whole comic page at once you have to deal with white bars on the side or cropped panels.

The actual experience of reading is unfortunately sluggish.

That same criticism applies to the rest of the software experience on the InkPad Color. The device runs a barebones Linux-based operating system, that besides supporting reading, offers apps for playing games and listening to audiobooks and MP3s. They’re mostly things I’d trade for a better reading app with settings that felt a bit easier to use. Anything’s better than shoving Android on it and calling it a day, I guess.

It all adds to the general feeling that while the InkPad Color screen is impressive in the context and history of E Ink and other e-readers, it’s not really showcased as well as it could be, and might not be what a comic book or magazine reader is looking for in an alternative to a tablet. It looks pretty good but doesn’t feel nearly the same to use.

Designing around a limitation

E Ink is good at specific things. That’s the idea I return to when I try and feel out why the PocketBook InkPad Color doesn’t quite coalesce. E Ink is great for e-readers, but color E Ink just might not be there yet.

That could change with time, and likely will, but there’s another reality to consider, which is that maybe it’s fine if it doesn’t. Something that’s interesting about the Light Phone and its sequel, is it seems like Light made a very conscious decision to use an E Ink display because of its limitations. A slower, less candy bar-addictive visual experience means a Light Phone owner might want to spend less time looking at the screen and more time living their life. It’s hard to complain that a display is sluggish when that helps achieve what the designers want to do.

I can’t help but feel that the same thing might apply to color E Ink. It’s a component in search of a product designed to work around it. Hopefully, color E Ink screens are used in something more exciting than an in-store display, but more tailored than slapping it on an e-reader and calling it done. If a slightly slower refresh rate is part of the experience, find a way to celebrate that limitation. The PocketBook InkPad Color doesn’t get there, but I have hope that there’s the perfect comic e-reader somewhere out there. Or some other use of color E Ink I haven’t even imagined yet.