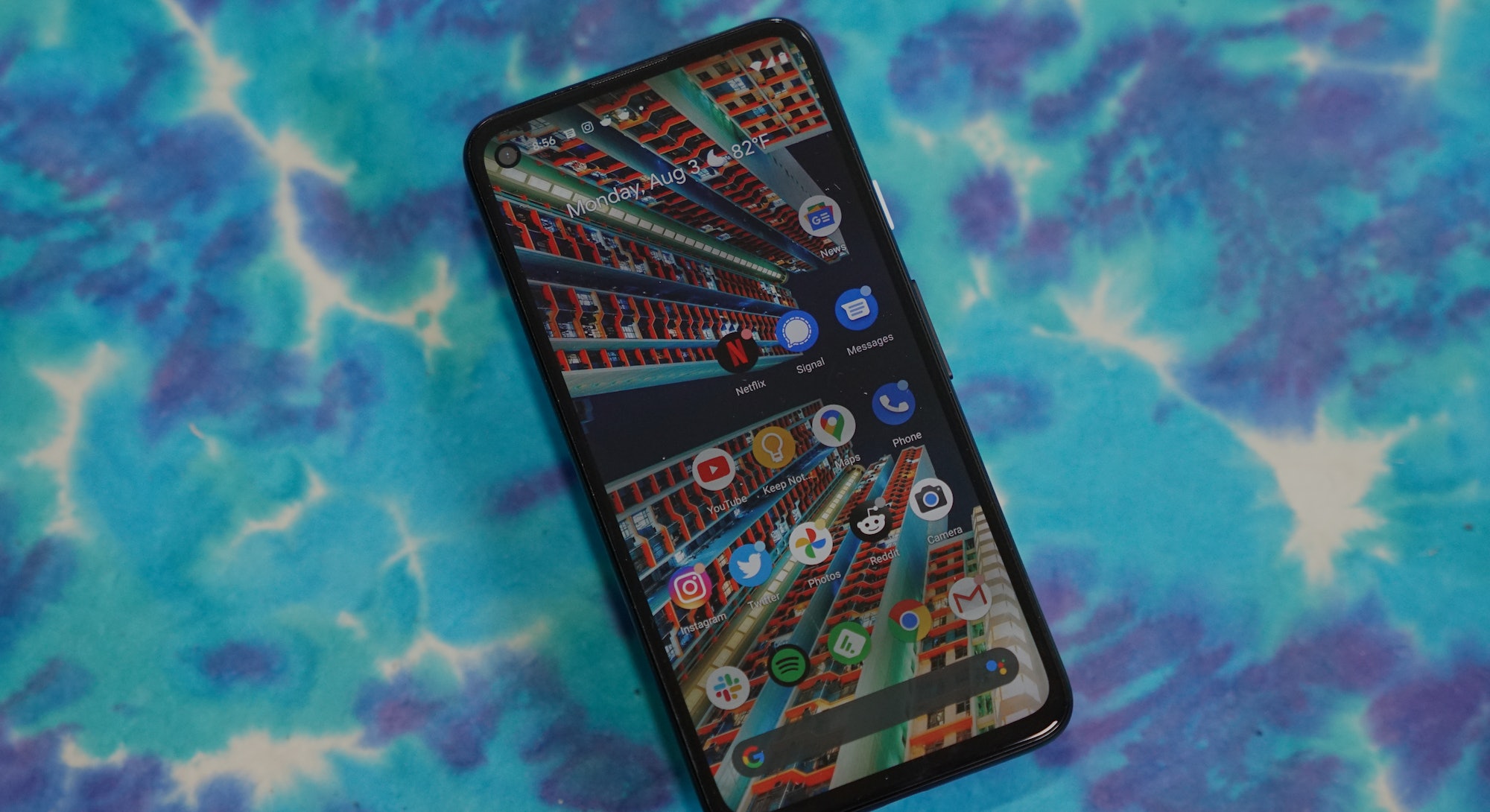 Google waited long enough and now it’s just letting the Pixel 4a, another mid-range Android phone, rip because *checks calendar* it’s August and if not now, then when?

The Pixel 4a is maybe one of the easiest phones I’ve reviewed in 2020 mainly because it’s so forgettable. The size is perfect and the camera takes great photos, but that’s not enough. Not even when it starts at $349.

I couldn’t tell you last week, but while I was reviewing the OnePlus Nord, I also was simultaneously testing the Pixel 4a. And let me tell you: the Nord whoops the Pixel 4a in almost every way. Even though the Nord isn’t launching in the U.S. (OnePlus has confirmed the Nord brand is coming as a different phone, though), its larger display, more versatile multi-lens front and rear camera systems, 5G, and similar pricing (starting at about $335 to $450 in India and Europe, respectively) unequivocally embarrasses the Pixel 4a.

The contrast between the Pixel 4a and the Nord highlights a very real problem: Google is lost when it comes to making Pixel phones. Why do Pixels even exist if they simply can’t compete against pricier premium phones or more affordable mid-range devices? I strongly believe it’s time for Google to either bow out of making its own phones or reboot the Pixel as a budget phone that costs even less or as a device that truly competes head-on with the flagship iPhone, Samsung Galaxy, and OnePlus phones in the world.

Right out of the box, the Pixel 4a feels exactly like it looks. The unibody matte plastic feels like a budget phone. There’s nothing here that even tries to punch above its weight class; on the other hand, the Nord’s polished frame at least looks like metal. Even the Nord’s metal buttons are nicer than the plastic ones on the Pixel 4a.

I don’t hate plastic, but there is a way to dress it up a little. I’d say Google got the plastic Pixel 3a XL, complete with signature two-tone matte and glossy top and bottom, right. Google didn’t even try with the Pixel 4a.

There’s nothing here that even tries to punch above its weight class.

I like a small phone (not too small) so the 5.81-inch display is a good fit. Physically, it’s about the same size as the 5.8-inch iPhone X/XS/11 Pro and just a bit shorter than the Pixel 4. The OLED screen (2,340 x 1,080) looks good, though I wish it was brighter; it does support HDR which is nice. But when you compare the Pixel 4a’s display to the Nord’s bigger and 6.44-inch OLED with 90Hz, it feels inadequate.

There’s a hole-punch for the selfie camera in the upper left corner — a more elegant design than the incredibly disappointing and unnecessary Soli radar sensor that’s packed into the forehead bezel of the Pixel 4. It’s too bad the selfie camera doesn’t have face unlock of any kind; the Nord has a 2D-based face unlock that I’m glad wasn’t omitted.

The rear-positioned fingerprint reader is a quick one, but the Nord’s in-display sensor works just as fast and I found its position on the front was better since my phone is face-up on my desk more often now that I work from home. If there’s any feature the Pixel 4a does better than the Nord, it’s audio. The Pixel 4a has stereo speakers (one in the receiver and one in the bottom speaker slits) and it has a headphone jack.

It’s hard enough for me, let alone anyone who’s less tech-savvy, to keep track of each mid-range Qualcomm Snapdragon chip. But in a nutshell, the Pixel 4a’s Snapdragon 730G is comparable to the Snapdragon 765G in the Nord. Of both chip’s eight CPU cores, the 765G has one that’s clocked an unnoticeable 0.2GHz higher. Cool.

Really, the Pixel 4a is generally pretty smooth. But the Nord has the edge. Android’s animations and transitions are smoother because of the faster 90Hz display; the Pixel 4a's 60Hz display is fine, but it does stutter every now and then. After a few weeks of using the Pixel 4a — filling up the 6GB of RAM and 128GB of storage — Android 10 did hit some bumps. The card-style recent apps view was no longer as snappy as the first few days. Meanwhile, the Nord still felt every bit as fast as it did on day one. In my experience, even though Google uses “pure Android” on its Pixel phones, they tend to bottleneck after a few months of use.

Last year, my Pixel 3XL inexplicably stopped saving and loading photos (no, I wasn’t out of storage) from the camera to Google Photos when I was out shooting comparison pics for my iPhone 11 Pro review. Since then, the Pixel 4’s camera has occasionally stopped taking photos and my Pixel 3a XL has crashed so many times that I’m lucky it hasn't stopped working altogether. Not surprisingly, the Pixel 4a’s camera jammed up a few times while shooting with Night Sight.

The whole point of the Pixel was that Google was supposed to be able to better optimize its bloat-free Android software with chipsets. Turns out Google’s no different from other Android makers and tuning Qualcomm’s chip for your software isn’t so easy.

One bright spot on the Pixel 4a is battery life. It’s good. I got between 5 to 6 hours of screen-on-time and didn’t experience as much idle battery drain as the Pixel 4, which sips battery life at an alarming rate. (Seriously, my Pixel 4’s battery regularly drops from 100 percent to 75 percent when it’s not even being used.)

On the Pixel 4a, there’s one rear 12-megapixel camera and one 8-megapixel selfie camera. Both cameras are very good cameras (as all Pixel cameras tend to be), but the Nord and almost any other mid-range Android phone has two, three, or four rear cameras. I’ll always advocate for one very good camera instead of multiple mediocre ones. That’s fair, but you’re leaving features on the table when other Android phones can now take photos with comparable image quality. If it makes you feel any better, the iPhone SE 2 only has one rear and front camera as well.

It really sucks the Pixel 4a doesn't have an ultra-wide.

The devil is in the details as they say. So let's look closer. Here are some shots of my scooter.

Zoom in on each pic and you'll see the differences in the 100 percent crops below.. Remember how I said the Pixel camera can bug out? Well, something went wrong because all four of my Pixel 3a photos missed the autofocus.

But, the Pixel 4a has Night Sight. Yes, it does! But it’s slower to take and process them compared to a Pixel 4. Nightscape on the Nord is faster, too, and of course, much faster on the iPhone 11 Pro. That said, I suppose it’s better to have a slower Night Sight than none at all (looking at you iPhone SE 2). A few times I got frustrated holding the Pixel 4a still for seemingly forever to capture a Night Sight shot (look, it’s summer and there are mosquitos in the park).

Selfies aren’t bad, either. But the camera isn’t too kind on skin tones the way an iPhone’s selfie camera is. I’ll let you guys be the judge of these selfies. Frankly, I wish all phones had an ultra-wide selfie camera like the Nord. The irony here is that Pixel 3 and 3 XL had a dual-selfie camera system, but Google dumped it starting with the 3a XL.

It’s hard not to look at the Pixel 4a and conclude that Google has cornered itself and can’t get out.

The competition is really high in the $300 to $400 phone range, which is what makes it so exciting. It’s a fierce race to a lower price and what is and isn’t included is usually the deciding factor for a phone’s mid-range phone’s success.

The Pixel 4a would be a competitive phone if it was released two years ago. However, in 2020, the game has changed. When phones like the Nord exist, the Pixel 4a isn’t even in the running. The only leg-up the Pixel 4a has over the Nord is that it’s available in the U.S. But even then, if you look hard enough, you can get something like the TCL 10 Pro for not much more and bask in the larger screen and additional camera lenses.

Google has cornered itself and can’t get out.

But wait — Ray, why does the iPhone SE 2 get a pass? It’s $399, has a smaller screen, thick bezels, and one rear camera as well. Easy: it’s the only low-cost iPhone that runs iOS. It has iMessage; it’s powered by the A13 Bionic, a chip that is equal in performance to the iPhone 11 and 11 Pro; and it has wireless charging and IP-rated water-resistance. These features are intrinsically more valuable than screen size and bezel thickness.

The Pixel 4 broke my heart with its terrible battery life, behind-the-times multi-lens camera system, and poorly-implemented face unlock. I really hoped Google wouldn’t disappoint with the Pixel 4a. It’s a good phone with a low price released at the wrong time. Buy a Nord instead if you can. If you’re in the U.S. or can’t import one (or live in an area where its LTE and 5G aren’t supported extensively), there are tons of more feature-packed mid-range phones you can get from other brands.