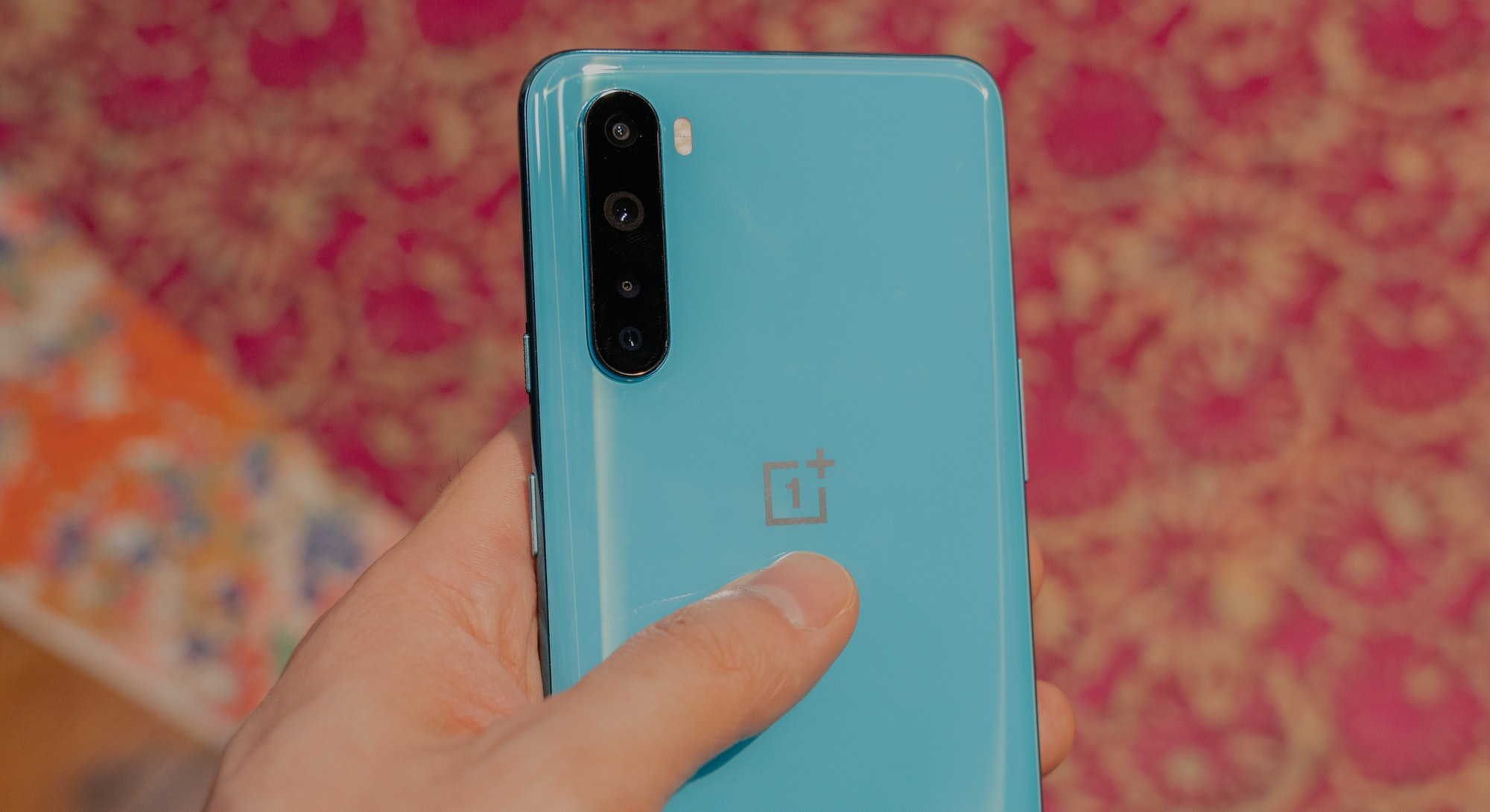 “Budget” and “mid-range” are dirty words when it comes to smartphones. I see it and immediately think: “Uh-oh, what kind of junk am I getting?”

Nobody wants a non-flagship phone with middling specs and performance. But people get them because they’re affordable. I feel nothing when I hold a mid-range phone in my hand because they’re generally not special. But not the OnePlus Nord.

The Nord somehow bucks the trend. It’s a rare shiny phone (the Nord Blue really is a classy head-turner) that keeps me wondering how a phone this substantial, with all of these features (six cameras and 5G), costs under $500 (starting at about $334 in India and about $456 in Europe). It's a real shame the phone isn't officially coming to the U.S. (hello, internet!).

Neither of the “missing” features like wireless charging or an IP rating diminishes the robust hardware or the clean and bloatware-free Android. The Nord is not the speed demon that is the current king of Android — the OnePlus 8 Pro — and the cameras are nowhere near as good. But even so, I can find very few faults with it. The Nord is a mid-range you won’t hate and, honestly, a phone I wish Google made instead.

If you clicked thinking maybe — just maybe — the Nord might secretly be something else, I’m sorry to disappoint you because it is indeed a phone. I’ve unboxed the Nord, smudged it and scratched it, and can confirm it’s a good slab. The Nord even fooled me: I didn’t notice the frame was plastic at first. It feels more expensive than it should be.

All of the expected buttons are present, tactile, and well-positioned for thumb and index finger reach. There’s a power button on the right side, a textured Alert Slider above it, and a volume rocker on the left side.

The screen is a big one. Not the biggest (6.44 inches) or sharpest (2,400 x 1,080 resolution), but at least it doesn’t curve. Oh, thank god the sides of the screen don’t curve because I can’t stand watching videos with the top and bottom all bent. Nor do I enjoy taking photos not knowing if the edges of my composition are straight or not. The display also has a 90Hz refresh rate just like the OnePlus 8, 7T, and 7 Pro — no downgrade here for OnePlus. Not a gimped one like you’d find in other mid-range phones. The sensor is positioned lower on the display than on other OnePlus phones, but it's fine. I rarely used the fingerprint reader after I turned face unlock on.

On the booty of the Nord is a USB-C port that can charge up the phone from 0 to 70 percent in about 30 minutes with the included Warp 30T charger. Next to the phone is a mono speaker that's really easy to muffle when you're playing videos and games. The mono speaker is arguably one of the Nord’s biggest compromises. I would have gladly traded the second nano SIM card slot to make room for a second speaker in the receiver. I’m also making up a new rule: if there’s no headphone jack, then there must be stereo speakers.

Oh, thank god the sides of the screen don’t curve.

The Nord has mid-range specs, which is really just another way to say OnePlus chose not to pay Qualcomm for its more expensive chips. Other than the chipset, the RAM (6GB, 8GB, or 12GB) and storage (64GB, 128GB, or 256GB) are bountiful.

Switching from the 8 Pro, I definitely noticed OxygenOS was a beat slower. Animations — for example in the multitasker — are just a step more sluggish and scrolling isn’t nearly as smooth even on a screen with a 90Hz refresh rate. On its own though, the Nord is perfectly competent. I had no issues browsing the web, watching YouTube videos, or zombie scrolling through Instagram or Twitter. Even video calls on Duo and Zoom worked smoothly.

It’s rare for any company to openly admit what their phone isn’t good at. For the Nord, OnePlus doesn’t hide the fact that the chip isn’t very powerful for 3D gaming. The Nord is capable of running the latest 3D games — I played a ton of Sky: Children of the Light and Asphalt 9: Legends — and aside from a few dropped frames, they worked fine. But the real downside to playing 3D games (especially for an extended period) is that the phone does get very warm and the battery drains quickly.

Which brings me to the battery. The Nord lasts all day. I threw my usual heavy workloads at it and always ended the day with between 15 to 25 percent battery. On really punishing days, the ridiculously fast Warp 30T charging always came in handy.

I should also unpack the Nord’s 5G. It’s kind of weaksauce. At least for me, the Nord’s 5G was not much faster than LTE. With my T-Mobile SIM card popped inside, I ran Ookla’s Speedtest several times within a 3-mile radius of my apartment in Queens, New York. The Nord averaged about 55 Mbps downloads and 46 Mbps uploads. Compare that to the OnePlus 8 Pro’s average 362 Mbps downloads and 61 Mbps uploads with the same SIM card. It’s clear as day that the OnePlus 8 Pro’s X55 5G modem that’s standalone from the Snapdragon 865 chip is way faster than the X52 5G modem that’s integrated into the Snapdragon 765G chip. Even my iPhone 11 Pro is able to get faster LTE speeds (108 Mbps download and 50 Mbps upload) than the Nord’s 5G speeds

On the backside, there’s a big pill that houses four cameras. A 48-megapixel main camera, which OnePlus says is the same main camera in the OnePlus 8; an 8-megapixel ultra-wide camera; a 2-megapixel macro camera; and a 5-megapixel depth camera.

The 48-megapixel image sensor may be the same one in the OnePlus 8 (not the 8 Pro), but the photos are absolutely not identical. Photos look good with similar color reproduction, but the sharpness is often a smidge softer with autofocus. For maximum sharpness, you’ll for sure need to tap-to-lock-focus more on the Nord than the OnePlus 8.

Below is a 100 percent crop from the above photos so you can compare the details.

The Nord’s ultra-wide camera is a different story. Besides having less resolution than the ultra-wides on the 8, 8 Pro, and iPhone 11 Pro, the Nord’s ultra-wide camera also produces less vibrant colors with less dynamic range. The below comparison shows the iPhone 11 Pro nailing the lifelike colors; the 8 Pro oversaturating the blues and greens; the 8 leaning too purple; and the Nord is kind of flat. It’s not a bad image by any means, but ultra-wide shots from the Nord require more editing to make them decent.

Selfies are surprisingly good. On a nearly 100-degree day, I hit the park to see how well the Nord’s 32-megapixel selfie camera and 8-megapixel ultra-wide selfie camera would fare. They’re better than I expected.

In the below scene, you can see how the different selfie cameras compare on color, HDR (if the sky isn't blown out, that's good), and skin tones. The Nord’s selfie camera has some serious lens flaring just like the OnePlus 8, but other than that the selfies are fine. The ultra-wide selfie, while not as high-res, is good, too. The most striking takeaway is how bad the iPhone 11 Pro's front-facing camera is at auto-HDR compared to the others; it completely overexposed the sky.

Finally, night modes. It’s called Nightscape on OnePlus phones, Night Sight on Pixels, and Night mode on iPhone 11 and 11 Pro, but they work the same. They all illuminate darkness by compositing a few seconds of exposures into a single photo. The results are noticeably different. Most shocking of all is how much better the Nord’s Nightscape is compared to the OnePlus 8, which failed to brighten up the scene.

These shots were taken in my nearly pitch dark bedroom with only a sliver of light coming in through the door (just enough light for me to frame my shots). As you can see, the iPhone 11 Pro leads the pack on night photography. The Nord can brighten a scene, but without enough light, it’s not very sharp. The Pixel 3a also struggles to nail sharpness and the Pixel 4 is darn noisy. (For some reason, the quality of Pixel phones seems to get worse with every new Android update.) The 8 Pro photo trails the iPhone 11 Pro, but mainly because the color temperature is way off.

OnePlus rose to global popularity selling “flagship-killers,” jam-packed with the top specs, at half the price of an iPhone or Samsung Galaxy. The Nord is a return to form for the company as it expands to reach a wider install base that demands more affordable products.

In my almost three weeks of using the Nord, I can confidently say that the Nord is the first mid-range phone that I don’t hate. There’s no bloatware constantly reminding me of the devil’s deal a company had to make in order to sell it for such low prices. There’s no crushing lag when doing basic smartphone things (OnePlus even replaced its own phone and messages app with Google’s own apps to improve performance). And it’s a dirt-cheap “5G phone” with a half dozen cameras.

The Nord feels like the spiritual successor to Google’s old Nexus phones.

The Nord sets the bar for all mid-range phones. In many ways, the Nord feels like the spiritual successor to Google’s old Nexus phones. It's the Pixel that Google should make. Sure, the cameras aren't the best, but they're good enough. Unlike the Pixel 1, 2, 3, and 4, the Nord has all of the fundamentals that made the Nexus phones big hits: it’s very affordable, very well-built, and very responsive. It's true, Google had the (now discontinued) mid-range Pixel 3a and 3a XL, but all rumors point to the Pixel 4a coming up short. In my opinion, Google should copy the hell out of the Nord. I think a phone like the Nord with Pixel branding would sell like crazy. OnePlus made the Android phone for the masses that Google couldn't.