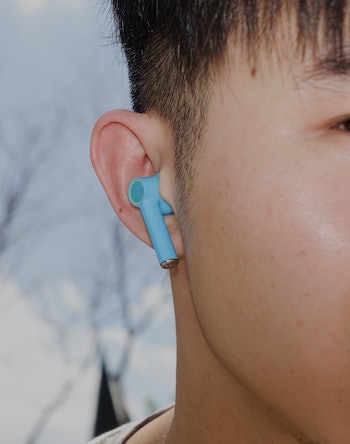 Stop me if you’ve heard this one before: a phone maker is announcing its very own true wireless earbuds. Because that’s exactly what OnePlus just did this morning alongside the OnePlus Nord.

As if you didn’t already have AirPods, or Galaxy Buds+, or Pixel Buds to choose from, OnePlus now has its own OnePlus Buds (original, I know). In my ears, they look like AirPods. My friends thought they were AirPods.

OnePlus Buds don’t have the best sound, only have noise-reduction and not true noise-cancellation (passive or active), and the case doesn’t support wireless charging. But they’re $79 and last up to 7 hours on a single charge (30 hours total with the case). Did I already say that they're super cheap?

Wireless earbuds that cost under $100 don't get better than OnePlus Buds.

With the exception of a touchpad on both buds, the OnePlus Buds really do resemble AirPods. The case is more like the Pixel Buds case — pebble-like with a matte finish — but slightly larger and flatter. I’m glad it’s not as bulbous as the Galaxy Buds+ case. The hinge feels solid; not as satisfying to pop open and fidget with as the PixelBuds or AirPods cases, but fine. There’s a charging indicator light on the front, USB-C on the bottom, and a pairing button on the back.

OnePlus sent me two of the three colors: Nord Blue and white. The Nord Blue, which is more of a teal, is fun. I don’t love the lime green on the inside of the case and on the ring on the buds’ touchpads. It’s tacky in my opinion. I’d go with the white or the gray, which I think looks the best (the case is a solid gray inside and out and there’s a red ring on the touchpads that actually looks good).

Okay sound quality — Every company loves to tout the sound quality on their wireless earbuds. The OnePlus Buds sound alright. Not glorious to my ears, but also not bargain bin junk. The audio quality is somewhere in the range of regular AirPods and Pixel Buds.

That is to say, they sound very middle-of-the-road. There’s nothing expressive about the sound. The bass doesn’t get very thick and the highs don’t always separate as cleanly as I'd like. There’s a noticeable fuzz or hum for many tracks that aren’t as distracting on other wireless earbuds. I’ve been listening to Rich Brian’s “Love In My Pocket,” a summer slapper, on repeat and the synths don’t sound as pronounced as they should be. More electronic songs like Camellia’s “GHOST” — a track I discovered through Beat Saber on the Oculus Quest — that’s heavy on the bass sounds flat and lifeless and the fast-paced beats sound like static. Even Queen’s “Bohemian Rhapsody” which always tickles my cold, immovable soul is rendered unexciting; the part with “mamma mia” doesn’t feel airy at all. Similarly, Michael Jackson’s “Billie Jean” lacks warmth.

Of course, this is just my personal preference. You may pop the Buds in your ears and think the sound quality is fine. On the bright side, they sometimes get great stereo separation. You need to dial up the volume to hear it, but it can sometimes make up for the stiff sound.

The OnePlus Buds are a level or two below AirPods and Pixel Buds, but at $79 it's hard to expect more. OnePlus says the earbuds have noise-reduction, but I didn’t feel like they did anything. I could still hear the gentlest ambient noises even with the volume set to around 75 percent. There’s just not enough of a seal in my ear canals for any kind of noise-reduction to be effective.

Lasts longer than AirPods — There's one thing that the OnePlus Buds get right: battery life. OnePlus says the Buds last up to 7 hours on a single charge. I’ve been getting between 6.5 to 7 hours so I’d say that’s accurate. That’s two hours longer than regular AirPods and Pixel Buds. The pressure is now on for Apple to extend AirPods battery life. Seven hours is good, but still not enough to topple the Galaxy Buds+, which get an insane 11 hours on a single charge.

The charging case provides an additional 23 hours of battery life or a little over three charges. A 10-minute charge via USB-C gives the earbuds 10 hours of battery life. The only catch is that you have to use OnePlus’ own Warp 30 Charger (sold separately). A slower charger like the 5-watt charger that comes with iPhones will charge it, well, more slowly.

At $79, you could get two for less than the price of one pair of AirPods.

Limited controls and pairing — OnePlus Buds pair with Fast Pair, which is Android’s equivalent for instant pairing between AirPods and iOS devices. Fast Pair is linked to your Gmail. Generally, I was able to pair the OnePlus Buds with a single tap after popping the case open. Occasionally, the Buds wouldn’t connect to my OnePlus Nord or OnePlus 8 Pro even when they were well within range. I'm not sure if that was a Bluetooth issue or wonky pre-release software.

Controls were also limited when I tested the OnePlus Buds. While each earbud has a touchpad, pre-launch, the only way to play / pause a song was to take a bud out of my ear and the double-tap could only be used to skip to the next track.

Stuff I couldn’t test — At the time the embargo for this review lifts, there are a few features that OnePlus says will be included in a software update coming a week later. That includes Dolby Atmos (for the OnePlus 7 and 8 phones), more touchpad controls (play / pause with a single-tap, customizable double-tap for going to the previous track, and activating the Google Assistant with a long-press), and automatic over-the-air (OTA) updates.

I’ll, of course, update this review when my OnePlus Buds get the software update. Dolby Atmos is nice — AirPods Pro is also getting them with iOS 14 — but it’s still limited to content that supports the spatial sound format. Music from Spotify or Apple Music isn’t going to sound better after the update.

Unbeatable price — Easily the best thing about the OnePlus Buds is the price. At $79, you could get two for less than the price of one pair of AirPods and still have $10 leftover. If you’re an Android user, there really are only two wireless earbuds to consider (outside of special fashion collabs and audiophile-quality sound): the Galaxy Buds+ and the OnePlus Buds. The former is still the continuous battery champ and the latter is an unbeatable value.

I liked the Pixel Buds when they came out a few months ago, but the battery life seems to have gotten worse. They last less than the 5-hour advertised listening time. Sony’s WF-1000XM3 has the best noise-cancellation for Android, but is almost triple the price of OnePlus Buds.

If you can live without the best sound, noise-cancellation, the longest battery life, and wireless charging, the OnePlus Buds are a really good value that's hard to ignore.