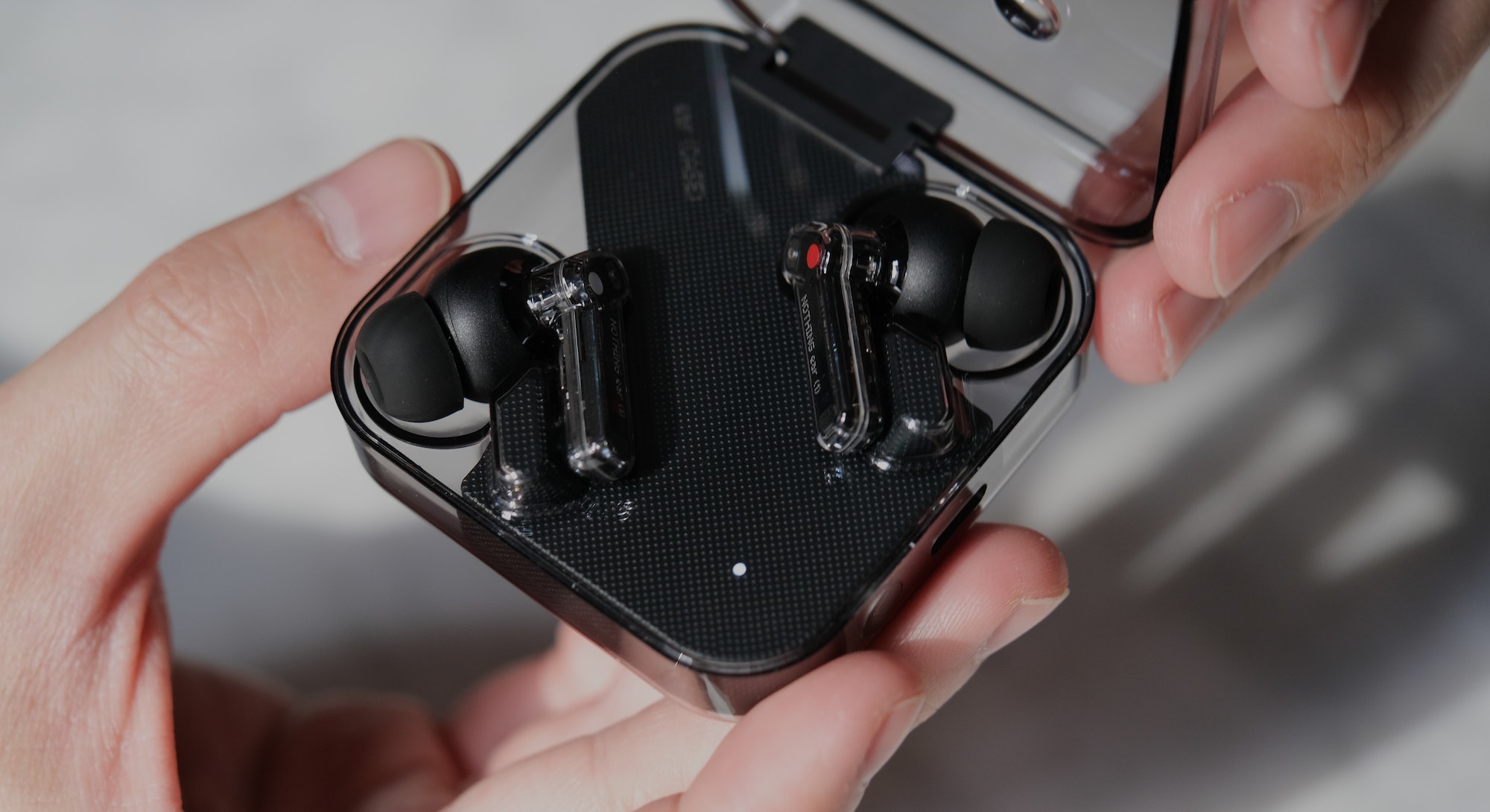 Different is the name of the game for Nothing.

Carl Pei’s tech startup launched the semi-transparent Ear (1) wireless earbuds to great fanfare over the summer. While the distinct-looking earbuds offered a ton of value for $99 — cool design, solid battery life, ANC! — hardware issues and software bugs left a lot to be desired.

Despite securing $50 million in Series A funding and announcing a collaboration with Qualcomm, Nothing’s second product is an aptly named “black edition” of the Ear (1). The limited edition wireless earbuds are identical to the regular model, except the buds and charging case are black. They’re very stealthy.

In my Ear (1) review, I said quality control and optimization were the biggest problems. The Nothing subreddit is still filled with posts from customers bemoaning problems. But things have gotten better with each firmware and app update.

While Nothing said the hardware is the same on the new Ear (1) Black Edition, I’ve experienced almost none of the problems I detailed on the three pairs of regular Ear (1) earbuds I tested. These are the wireless earbuds Nothing should have shipped at launch.

Nothing Ear (1) Black Edition
Nothing

The Black Edition of Nothing's Ear (1) seemingly fix all of the regular model's bugginess.

One of the biggest complaints I hear about AirPods is that they only come in white. For many, even with bits of transparency, the regular Ear (1) simply looks too much like AirPods Pro. Other wireless earbuds like the OnePlus Buds Pro have capitalized on this, offering black buds. Now, so does Nothing.

It’s not just the white plastic that’s been swapped for black. The silicone ear tips are blacked out, as are the silver filter mesh (the perforated metal piece when you remove the ear tips), and magnet cover and hinge. The partially transparent charging case is tinted, too. Even better would have been blacking out the USB-C port and magnets themselves but that kind of extra attention to detail is hard to come by these days.

All of the plastic is still as easily scratch-able as before; my charging case immediately got nicked in several places in my pocket. And of course, the indentation on the case is still a fun way to fidget with it.

I’m most shocked Nothing isn’t charging extra for this black version of the Ear (1). Apple would. (Remember when the black plastic MacBooks cost extra over the white ones?)

Batman-approved aesthetic aside, the most important thing is that the black edition Ear (1) work properly. In several weeks of wearing them, I think I only had two or three instances where the active noise cancellation (ANC) cut out. And it was only for a half-second or so. It also happened while I was in a crowded area (outside Penn Station after work and on the packed subway). The occasional connection interference, especially in populous locations, is normal for all wireless earbuds or headphones.

The Ear (1) Black Edition are terrific wireless earbuds for the money.

I didn’t have any charging issues and the app for both iOS and Android properly reported battery levels for both buds and the case. Neither bud drained faster than the other. (I expect this to eventually happen over time, but never in the first few weeks and months when the battery is fresh.) The Bluetooth connection problem I had with one pair of the regular Ear (1) I tested where the earbuds would stay connected to my iPhone even when they were returned to the case and closed is fixed. The black edition Ear (1) buds connect and disconnect correctly, and much quicker than before.

The microphones sound better as well according to people I spoke with over Zoom and FaceTime on several devices including the iPhone 13 Pro, Pixel 6 Pro, M1 MacBook Air, and Surface Pro 8.

The improvements in the black edition Ear (1) buds felt almost too good to be true considering Nothing said the hardware is the same in the regular version. So I updated all three pairs of the regular Ear (1) to the latest firmware (version 0.6700.1.83 as of this writing) to see if I was imagining things. Sure enough, I noticed ANC connection problems and a few new issues like the ANC or Transparency getting stuck when toggling between them. Mind you, I connected the regular and black edition Ear (1) buds to the same app on the same phone.

I have no idea what’s going on. Maybe my two pre-productions and one early retail Ear (1) buds have some serious hardware defects, and even the big app update Nothing pushed out on November 2 that improves ANC sound quality, strengthens connections, and optimizes charging can’t fix them. Or maybe Nothing has silently solved or reduced any hardware issues in the latest models rolling off assembly lines. While I can’t promise every pair of black edition Ear (1) will be bug-free, all I know is that the black edition Ear (1) — at least my review unit, which was sealed and as far as I know untampered with — work correctly for the most part.

If you were hesitant to get the regular Ear (1) on the chance that you might have to deal with crippling bugginess, maybe consider the black edition. The Ear (1) Black Edition are terrific wireless earbuds for the money. You can find all my thoughts on sound quality, ANC, and battery life in my original Ear (1) review.

The Ear (1) black edition comes out on December 13, but if you absolutely must be first, Nothing will be selling 100 units of the wireless earbuds, each engraved 1 to 100, at a special kiosk at Seven Dials, Covent Garden in London, starting on December 4 at 11:00 GMT. Why London? Nothing is based in London.

In typical do-things-differently fashion, the company’s even accepting crypto as a form of payment for purchases made through its website. Acceptable crypto includes Bitcoin, Ethereum, and Dogecoin. Yes, the memecoin will be accepted.

The fixed wireless earbuds give me hope.

Those are the details on the black edition Ear (1). Alongside their announcement, Nothing says its wireless earbuds are carbon neutral. In a press release, Pei said the Ear (1) is “the first step in our journey to sustainability” and that he hopes “more tech brands add carbon transparency to their products.” The black edition Ear (1) will reflect this new carbon neutrality with a new label on the packaging; Nothing says its neutralized carbon footprint is verified by third parties such as Geneva-based testing, inspection, and certification company SGS.

From its very start, Nothing has tried to do things differently. The black edition Ear (1) steps out of the AirPods’ shadows more so than the regular version and corrects the problems that inexplicably plague the regular version.

The fixed wireless earbuds give me hope that Nothing can actually make a dent in the sprawling consumer tech space. I was bummed with the quality (not the features) of the Ear (1) at launch, but now I’m more excited for the ecosystem of devices Nothing is cooking up for 2022. I pray the next product isn’t rushed.