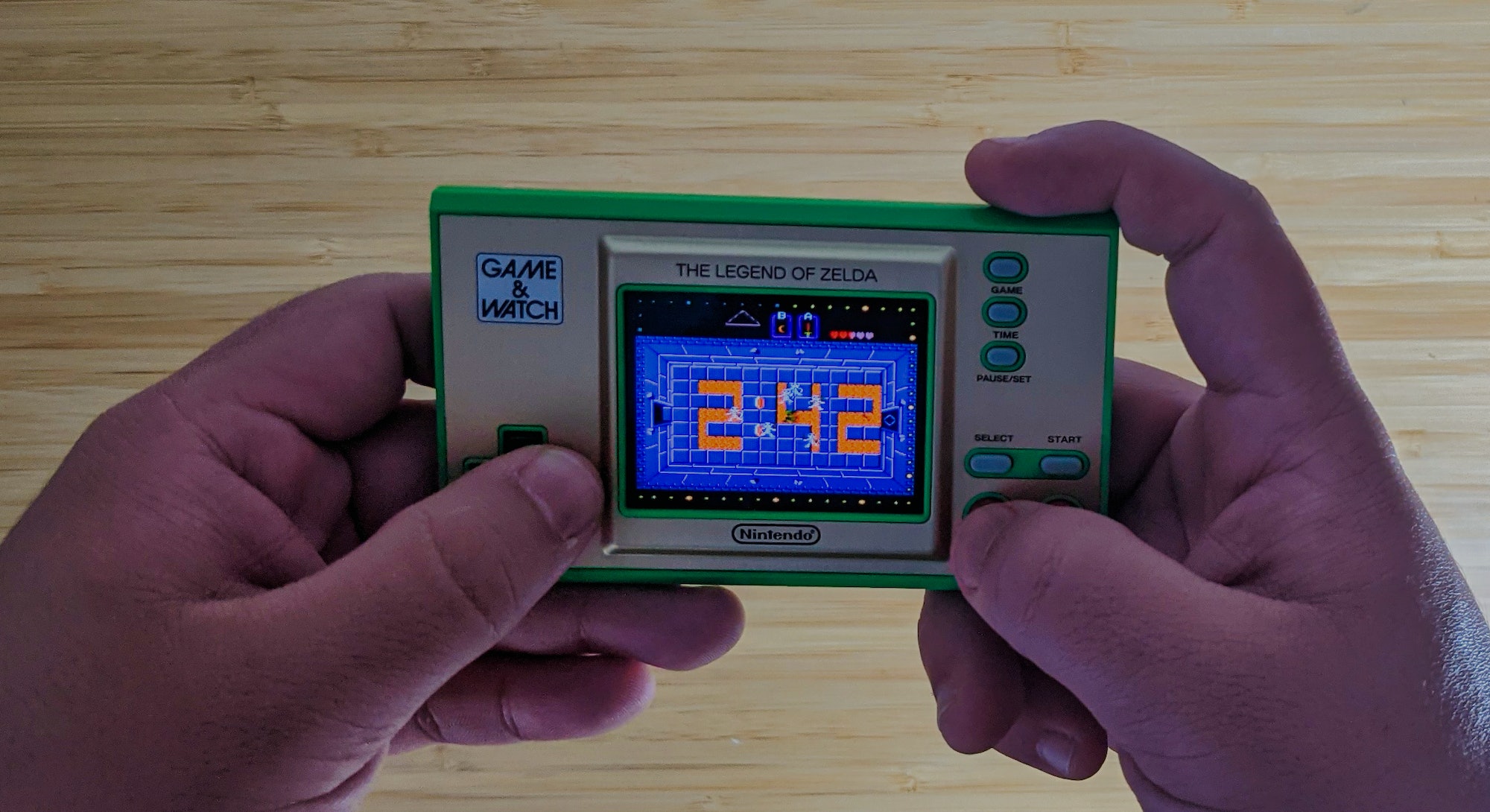 It’s been a bad year for handhelds. The Steam Deck and Playdate are both delayed until 2022, and the Analogue Pocket until December.

But if you must get your handheld fix, there’s at least Nintendo’s Game & Watch: The Legend of Zelda. The $50 handheld is a Zelda version of the Game & Watch: Super Mario Bros handheld released last year. If you’re a fan or a collector, the Zelda Game & Watch is a no-brainer. If you’re not, there are better ways to experience the three included classic Zelda games.

Nintendo's Game & Watch: The Legend of Zelda handheld is for diehard fans only.

The hardware hasn’t changed from the Mario Game & Watch. If you’ve played with that one, the Zelda version handles the same. At 6.3 x 3.54 inches (0.86 inches thick), it slides easily into pockets. The 2.36-inch LCD is as sharp as ever and has generous viewing angles, which is important when the handheld is in time mode.

The D-pad is miles ahead of most handheld emulators these days. The buttons have a slightly mushy, soft feel that I like.

This new Game & Watch has the same STMicroelectronics chip and battery, so you can expect to go a long time between charging. I left it running in time mode at 50 percent brightness, and it lasted roughly eight hours before powering down. And when I charged it, it booted up instantaneously, picking up right where it left off. It even saved my place in a game even though I hadn’t saved. A new auto-sleep mode option can power down the device after three minutes if you want to conserve battery life.

The small dimensions come with the same downside I had with the Mario Game & Watch: if you’ve got large hands, the sharp edges tend to dig in.

What about when you want to display the Zelda Game & Watch? While you could buy a stand from Rose Colored Gaming or make your own, you don’t need to this time around. The Game & Watch: The Legend of Zelda’s packaging has kickstand cutouts in the back to use it as a display stand. It’s a neat touch made better by the all-black packaging and single gold Triforce logo that make the device stand out. I was pleasantly surprised to find this, and I’ve had it on my desk ever since, but it’s not the coolest surprise.

That honor goes to the embossed Triforce logo on the back of the device, which lights up. The strength of the rear light depends on the brightness level you set the screen to. It’s not a feature you’re likely to enjoy when the device is on display, but it’s still pretty dope.

Whereas the Mario Game & Watch featured only two games and a re-skinned original Game & Watch game, this model features three games in The Legend of Zelda series. You get the original The Legend of Zelda; the oft-forgotten 2D sidescroller Zelda II: The Adventure of Link; and the recently remade Game Boy bop, The Legend of Zelda: Link’s Awakening. The Game & Watch game, Vermin, is also included. In my opinion, this trio of games holds up much better than the Super Mario Bros. games, especially Link’s Awakening. I spent most of my time playing this game, and though it lacks full color, the crisp display and contrast ratios make it an enjoyable way to re-experience the game.

However, the one caveat with The Legend of Zelda: Link’s Awakening is that it’s the original monochrome version for the Game Boy and not the updated DX version that came later for the Game Boy Color. That version came in color and included new content as well as bug fixes. A monochrome palette-swapping feature, like when playing Game Boy games on the Game Boy Advance, would have been a good compromise. At least there’s the option to adjust the aspect ratio from full screen to the original.

Aside from the games, you can also control Link when you put the handheld in time mode. The previous Super Mario Bros. Game & Watch allowed you to add extra enemies for Mario to defeat in time mode; on the Zelda handheld, you can move Link around and fight off enemies in a modified version of The Legend of Zelda. It’s a fun little way to pass the time. You can also control Link in the new timer mode. The max 10-minute timer isn’t all that helpful, but at least you can control Link. What’s different here is that you’re playing a version of Zelda II: The Adventure of Link, fighting enemies in a 2D stage rather than a top-down one. There’s even a hidden challenge mode, where you have to defeat 21 enemies as fast as possible. And it’s not the only secret or Easter egg to find.

Similar to the Mario model, the Game & Watch: The Legend of Zelda is full of little surprises to uncover. If you want the full list, you can head over to Nintendo’s site, but it’s better to find them yourself. Without spoiling too much, my favorite secret involves holding the A button for five seconds in time mode, which mutes the annoying clock ticking noise and replaces it with in-game music. Another allows you to save in any of the three games by pressing the A, B, Start, and Select buttons at the same time. Of course, with these older games being frustratingly hard, there’s the option to apply cheats. And if you play the games in other languages, you may spot some region-specific differences. I could go on, but I don’t want to ruin the fun.

For die-hard fans of the Zelda series, the Game & Watch: The Legend of Zelda is an easy pickup. Nintendo did right by fans by including The Legend of Zelda-specific touches and plenty of Easter eggs. That said, there's so much squandered potential here that, once again, I’m left wondering what could have been.

If you’re picking this Game & Watch to catch up on Zelda classics, there are so many cheaper and better legal ways to do it. For example, you can play the first two games on the Switch via Nintendo’s Switch Online platform. And as for The Legend of Zelda: Link’s Awakening, you can play the DX version on the 3DS, or you can play the remake on the Switch. Emulation with ROMs on other devices is an alternative, but you do so at your own risk subject to the law in your region. (We, of course, don’t condone piracy, only legal ROMs.)

Unless you have the skill to add new games or mod the hardware, there’s little on the Game & Watch: The Legend of Zelda to keep you entertained once you’ve played the games and found the Easter eggs.