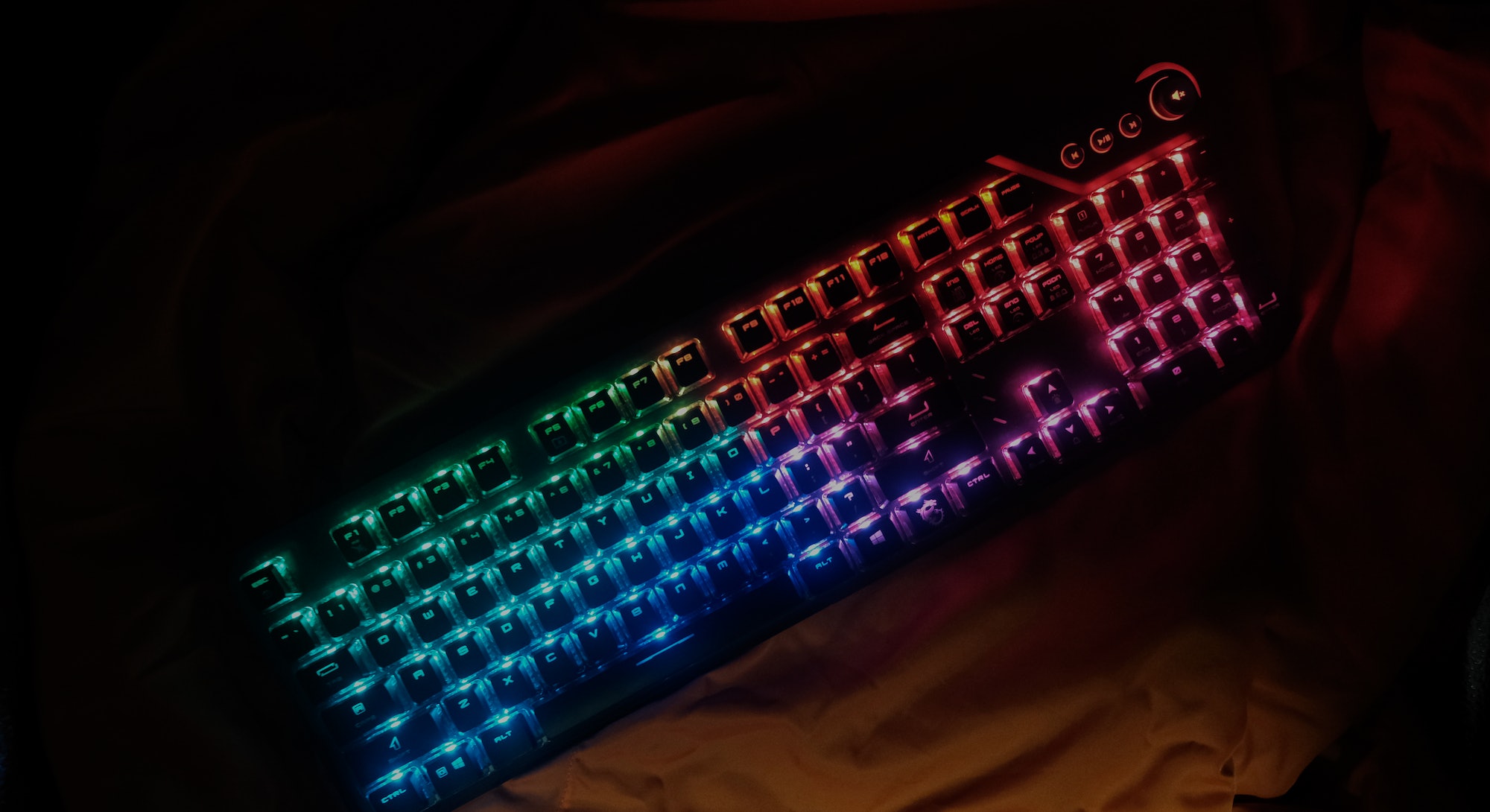 Some gaming keyboards are meant to be luxurious, with programmable macros, full-metal construction, and thick keycaps. Others are meant to be useful, with optical switches, ultra-fast response rates, and lots of customization. MSI’s newest keyboard — the GK71 Sonic — is meant to be bright.

Sure, the GK71 Sonic offers options like their new 35-gram switches and boasts a 1,000Hz response rate, but none of these are what really stands out about this mechanical keyboard . Instead, the main attraction is the incredibly bright and colorful RGB array, and the keycaps that accentuate it.

MSI's GK71 Sonic is a full-size mechanical keyboard with pudding-style keycaps, ultra-light switches, and a fairly standard plate-mount system in a low-profile case. The keyboard has three multimedia controls, a dial on the top-right corner, and is stylized heavily to appeal to the gamer aesthetic.

While it does have some clear benefits, it ends up ultimately feeling underwhelming when compared to other brands’ offerings, lacking the build quality and typing feel one would look for in a keyboard retailing above $100.

MSI’s “Sonic Red” switches — manufactured by Kailh — feel reminiscent of recent trends in mouse design: The idea that “lighter is always better” has overtaken the gaming industry since the release of the original Finalmouse Ultralight Pro gaming mouse, and it seems this has finally transferred over to the keyboard market. The GK71 Sonic's ultra-light 35-gram switch springs compare to a Cherry MX Red’s 45-gram spring and an MX Black’s 60-gram spring, both of which are noticeably heavier and, for many gamers, will feel slower to use.

When typing on these keys, I noticed that much of the “lightness” of the switches was not actually from the springs’ weight, but from the switches’ actuation point. These switches register a keypress higher than most other switches, meaning you have to press them down less to get an output — much like Cherry’s MX Speed Silver. This creates the feeling that the keyboard is “faster” to type on despite registering keypresses at the same speed as any other keyboard. While this can be helpful for gaming, it can contribute to accidental inputs while typing or gaming. When resting my hands on this keyboard, I found the passive pressure of my fingers was enough to accidentally press a key, something I wouldn’t notice until a few seconds’ worth of “jjjjjjjjjjjjjjjjjjjjjj” suddenly appeared on a document.

Due to the odd nature of the switches — a combination of their lightness and high actuation point — I found it hard to maintain a consistent typing speed and accuracy. With my usual linear keyboard, a Boardsource Mark 65 with Blue Velvet PME switches, I can get around 125 words per minute (WPM). With the GK71 Sonic, I had trouble maintaining 100 WPM, and my accuracy went downhill as well. However, the switches were useful for high-speed gaming. I used the keyboard extensively when playing games like Halo Infinite, Destiny 2, and Ghostrunner, and found their speed and lightness to be beneficial in all of them, allowing for faster responses and less downtime between keypresses when compared to heavier linear switches with lower actuation points. While I did occasionally deal with mis-inputs, I imagine that this would be resolved with some practice.

The RGB lights are some of the brightest I’ve seen.

To return to the actual typing experience on this keyboard: The switches feel cheaper than both Cherry’s MX Red switches and — for a more comparable switch — Gateron’s Clear switches, which also have a 35-gram spring weight. They’re scratchy and have a lot of wobble, meaning the keys move back and forth easily, which is likely in part due to the lighter springs providing less resistance than a heavier spring would. While these issues aren’t necessarily horrible — the average gamer won’t notice this — it does prevent the switches from being particularly useful within enthusiast circles. In addition, the lack of hot-swap sockets means users are likely stuck with these switches no matter what (unless they want to desolder their switches and install new ones).

A small detail that I appreciated was the fact that the stabilizers already had some form of lubricant or grease applied to decrease rattle. While this is fairly standard today, it’s still worth commending due to the massive improvement it has on typing experience when compared to stock stabilizers.

This keyboard is the epitome of gamer aesthetics. The RGB lights are some of the brightest I’ve seen, and the almost-transparent keycaps let almost all of this light shine through. If you’re a huge fan of RGB lighting, then this keyboard will definitely fit your needs.

In addition, the MSI Center software allows for in-depth editing of the keyboards’ RGB profile, allowing you to customize the lighting to fit your exact setup. While the software can be a bit awkward to use at times, being much clunkier than Corsair iCue and Razer Synapse, it’s still useful for the most part, and using it is a lot easier than trying to adjust lighting settings entirely through the keyboard’s function layer.

The app can also be used to remap keys and program macros on the fly. This is especially useful when you have an abundance of unused keys — something that the numpad will provide for most users.

However, the gamer aesthetic makes a lot of things awkward. Due to the decision to use regular buttons instead of mechanical switches, the three buttons in the top-left corner all feel unsatisfying to use. The same is true for the dial next to it, too. And with that, the logo on top of the dial, which functions as a mute button, rotates along with the rest of the dial. Because of this, the graphic will often end up sideways or upside-down, something that drives the neat-freak in me absolutely crazy.

I will say, however, that the keyboard’s feet are a really clever design. By having the feet fold outwards instead of backwards, and by having them at a fairly harsh angle, moving the keyboard around on your desk is now much less likely to fold one of the feet inward, something that constantly bothers me with other mechanical keyboards.

A lot of plastic

This keyboard is huge. I can’t imagine using a full-size layout in this day and age. They’re long, cumbersome, and barely have any benefits when compared to an 1800-layout keyboard like the Drop Shift, a TKL like the Razer Huntsman V2 TKL, or even a 65% keyboard with a separate numpad. However, I do know a few people who prefer a full-size keyboard to a more compact one, so it’s not like this keyboard doesn’t have a reason to exist.

The all-plastic backing of this keyboard results in an unpleasant typing sound, too. Typing on this keyboard feels hollow and brings attention to the scratchiness of the keys, something that can’t easily be fixed without some in-depth modifications like adding foam behind the PCB or desoldering and lubing the switches. While adding foam is easy, desoldering would be a lot of work, especially when you could build a keyboard with hot-swap switches and Gateron clears — a mechanical switch that has a comparable actuation weight to the Sonic Reds and a smoother stock typing experience.

To allow for cables to be placed underneath it, the back of the keyboard has an “X” shape carved out of it. While this is a cool concept to prevent cables from being tangled, it isn’t particularly useful, especially in the age of wireless technology.

The keycaps included on this board are high quality. They’re doubleshot, pudding-style keycaps made from ABS plastic. Because they’re pudding-style — meaning the bottom half of the keycaps is transparent — the RGB is able to shine through exceptionally well. In addition, the keycaps’ plastic feels super solid. It’s like typing on Lego bricks (which use some of the best ABS plastic available).

Also, the included wrist rest is a welcome inclusion. It’s made from a soft memory foam much like Razer’s, and generally feels good to use when typing.

One of the key issues with this keyboard is the USB cable: Instead of opting for a Mini-USB, Micro-USB, or USB-C connection, MSI decided to make the cable soldered directly to the board. This means the cable can’t be replaced with a higher-end cable (here are our picks for the 8 best USB cables for your mechanical keyboard), and it can’t be swapped out should it fail. Instead, the entire keyboard would have to be opened to make what would normally be a five-second part swap.

Along with that, you would likely be out of luck if a switch suddenly broke. MSI doesn’t seem to offer the Sonic Red switches for sale individually, and they’re different enough from Kailh’s normal Speed Silver switches that it would be noticeable if you used one as a replacement.

This keyboard is huge.

The keyboard’s top-left media control buttons are questionable, too. They make use of a small PCB attached to the bottom of the case with three small buttons soldered on. From there, there are three long stems that extend from the bottom of the case up to the buttons themselves. Overall, this system doesn’t look robust or durable at all, and the same can be said for the dial next to it, which is revealed to be incredibly wobbly once the plate is removed.

The back case of the GK71 Sonic is fairly thin, too. When disassembled, it can easily be bent by hand, and the plastic feels like it could potentially crack if dropped from a height. While the support structures and metal front plate balance this out to create a rigid keyboard with little flex, it’s still worth noting.

While MSI's GK71 Sonic isn’t the best keyboard for typists, it does offer a lot of features that are useful for gaming. With flashy RGB, ultra-light switches and programmable macros, this keyboard has a lot going for it on paper.

However, issues like the non-removable cable, below-average switches, thin plastic case and unpleasant media controls prevent this keyboard from being a great option. The overall package feels cheap, and at a MSRP of $110, that’s a serious problem. While the GK71 Sonic does do some things well, there are other options — like the Razer Blackwidow V3 (the full-size is available for $110), the Keychron K14 for half the price (~$70), or the Huntsman V2 TKL ($160) for a bit more — that are better keyboards across the board.