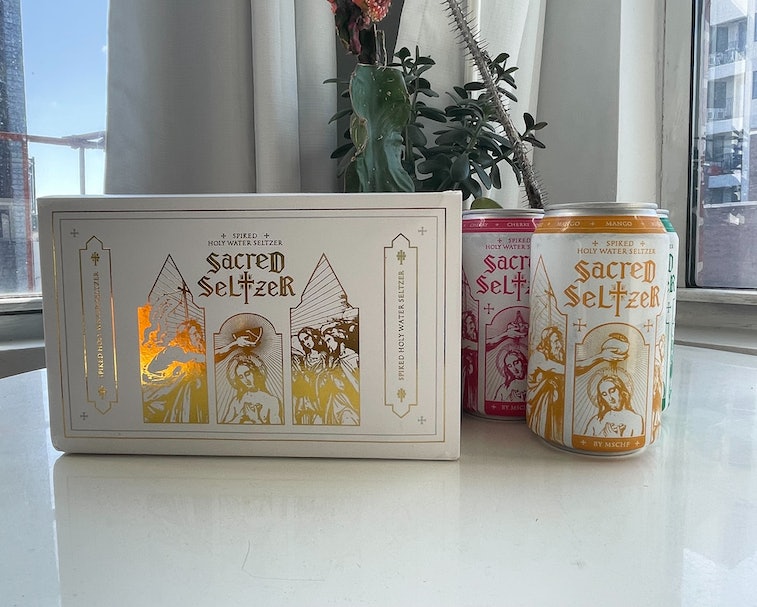 As MSCHF continues its legal battle with Vans over its “Wavy Baby” sneakers, the Brooklyn-based art collective isn’t slowing down with the stunts. Returning to its blasphemous ways, which first grabbed attention with the Lil Nas X “Satan Shoes,” MSCHF is releasing spiked seltzer made out of authentic holy water.

Sacred Seltzer is 95 percent holy water and five percent alcohol. Per its dedicated website, the water used to make the spiked seltzer was blessed according to official Catholic procedure on March 31 in Los Angeles. The actual brewing was done by Eliqs Brew Co., a Santa Monica-based company that specializes in beverages with personalized packing for events such as weddings or corporate gatherings.

Ahead of the seltzer’s release, MSCHF sent Input a couple of six-packs to try out the libations and “be brutally honest” in our review. Having indulged in the holy intoxicant over the weekend, though, I have nothing brutal to report.

Each of the three flavors — mango, lime, and cherry — is just fine. They’re not nearly as bad as Travis Scott’s discontinued Cacti seltzer but not great enough to upend your spiked seltzer preferences either. Sacred Seltzer is perfectly acceptable to drink, with the bonus of being very likely to piss off some pearl-clutchers.

Blasphemy really tickles my spirit and I had fully planned to indulge in Sacred Seltzer as part of a night of unholiness. Unfortunately, my 30-year-old sensibilities kicked in, and instead, I spent Saturday night drinking MSCHF’s first alcoholic beverage while staying in and watching hockey. I ripped through each of three flavors as the Colorado Avalanche proceeded toward a sweep of the Nashville Predators. Perhaps the holy water coursing through my veins was the good luck charm needed for a 7-3 victory.

First up on the night’s agenda was mango, truly one of the most divine of all fruits. The first sip was kind of disappointing, though, as the flavor was relatively faint. If anything, it tasted more like coconut. I have a feeling that those who like ordinary seltzers may like this one more, but as someone who doesn’t care much for static-y water with just a tease of flavor, I was not impressed.

Next up was cherry, my favorite of the trio. It was quite crisp, and my concerns that it might taste like medicine were flushed away when I found a cherry taste more like what you’d find in a Cherry Coke. The flavor here was stronger than mango but still on the lighter side. I wouldn’t take it over a Truly or Bon Viv — and especially not over a beer — but the cherry Sacred Seltzer draws no complaints.

Finally, to complete my holy water buzz, I knocked out the lime. Again, I was met with a fairly faint flavor, but this one at least had some crispness to make it more worthwhile. It kind of reminded me of a vodka tonic with a lime squeezed in, which is my preferred mixed drink if I must stray from beer. I can’t rave about it, but again I wouldn’t dissuade you from drinking it.

My true praise is reserved for the packaging, which is where Sacred Seltzer shines as another great stunt from MSCHF. The six-pack comes in a white box with metallic gold branding and is flush with religious imagery, including crosses and the sort of scenes you’d see in a church’s windowpane. The cans themselves are identical save for colors mirroring their namesake fruits and the respective flavor inspiration being held over Christ’s head in the central motif.

The blasphemous box is a fine accessory for an atheist.

Because I was sent two six-packs, I might just save one of them to display; the blasphemous box is a fine accessory for an atheist.

Whether you want to do the same or treat your stomach to holy water and alcohol, you can pick up a six-pack for $24 beginning at 11 a.m. ET today through Sacred Seltzer’s website. Had MSCHF turned to a brewery more focused on the actual drink than the packaging, perhaps a better flavor profile would have been in order. But then again, we might not have gotten such great decorations either — and really, that’s what’s most important.