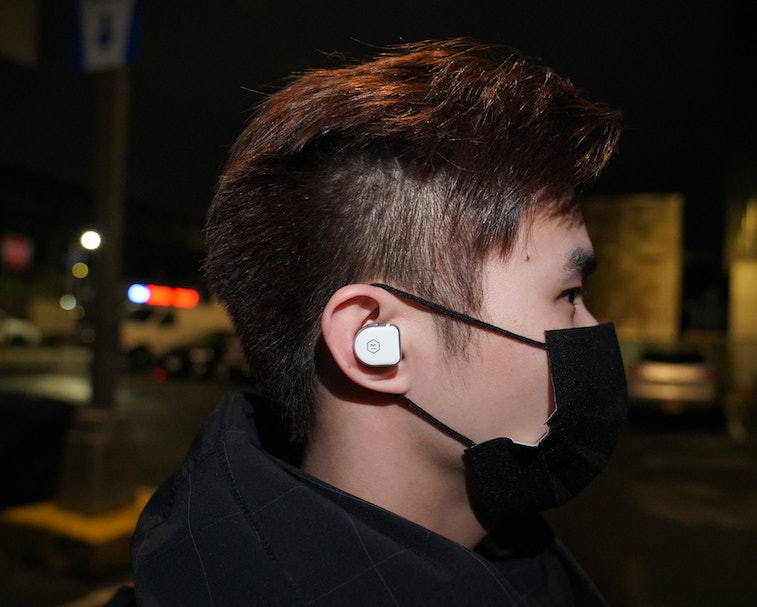 I love my regular AirPods and I love my AirPods Pro even more. But lately, aside from taking them out to use with Apple Fitness+’s weekly Time to Walk episodes, they’ve been collecting dust in my desk drawer.

See, as quick as I’ll recommend AirPods Pro to anyone looking to buy wireless earbuds, features that gave them a sizable advantage for years like battery life, sound quality, and charging case size are now surpassed by wireless earbuds like the Master & Dynamic MW08 that I’ve been using for the past few weeks.

More choice is, of course, great for consumers and there are still strong reasons to get AirPods Pro over the MW08 or Samsung’s Galaxy Buds. There’s no “killing” AirPods — it’s now a huge business — but good ANC wireless earbuds like the MW08 highlight the areas where Apple is no longer industry-leading.

With up to 40 hours of battery life between the earbuds and the charging case, the MW08 outlast the AirPods Pro.

Master & Dynamic specializes in premium headphones. Long before the AirPods Max, there were the metal and leather-clad MW65 and before that the MH40 Wireless. For wireless earbuds, the MW07 Plus and MW07 Go. The New York City-based brand frequently collaborates with celebrities, athletes, and luxury brands like Kevin Durant, Nike, and Louis Vuitton.

Once upon a time, Master & Dynamic headphones were considered expensive. But with Apple claiming its stake in the premium audio segment with $559 AirPods Max and $249 AirPods Pro, Master & Dynamic’s products — some of which cost less than Apple’s — no longer feel like products designed for the rich. They’re still pricey, but their value comes across as better now that there’s more competition.

You don’t need to be a math whiz to understand that 10 hours of ANC listening is longer than the AirPods Pro’s 4.5 hours, Galaxy Buds’ 5 hours, Sony WF-1000XM3’s 6 hours, and Jabra Elite 85t’s 5.5 hours. Even with the small dip in battery life with the reduced ANC, the MW08 battery life is still king. It’s not just the buds themselves that last really long on a single charge, the stainless charging case holds up to 30 hours of battery life for a total 42 hours of combined battery life. That’s almost double what you get from the competing ANC buds from Apple, Samsung, Sony, and Jabra.

I didn’t need to charge them for an entire weekend.

When I first got the MW08 buds, I didn’t need to charge them for an entire weekend. With about 3-4 hours of listening time each day and the buds automatically powered off on my desk, I was blown away by their multi-day stamina. Popping them back into their case charges them back up to full like any wireless earbuds, but going two full weeks and only having to plug it in once is life-changing. I’m certain I’d only need to charge these wireless earbuds two (maybe three) times a month instead of the four to five times I do with other wireless earbuds.

The charging case isn’t much larger than the AirPods Pro case. The stainless steel was covered in scratches as soon as it went into my jeans pockets, but it still looks elegant. The lid opens and closes with a satisfying magnetic snap; there are three LED indicators for battery levels; and, the USB-C port is conveniently located on the side instead of the bottom.

Master & Dynamic has been doing ANC headphones for a long time. Many years ago, the company took press up in a helicopter above New York City just to show off how impressive its ANC tech could drown out the chopper’s spinning blades.

I have not been able to test the MW08 earbuds in a helicopter or a plane (as much as I can’t wait to fly again). But as far as filtering out the rumbles of a loud subway ride through tunnels, car traffic, and the clackety-clack of my blue switch mechanical keyboards, the “hybrid” ANC on the MW08 sounds as good (if not better sometimes) than the ANC on AirPods Pro and Galaxy Buds Pro. That is to say, they block out a good amount of noise, but are not as effective at drowning out the world as over-ear ANC headphones. I had concerns when I read the word “hybrid” in the product description, thinking it might be more similar to the open-ear design of the Galaxy Buds Live, but they quickly disappeared as soon as I got some tunes playing.

Vocals across the audio spectrum glisten with punctuated clarity.

The sound quality is sublime. These are easily some of the best wireless earbuds you can get if you value sound quality. Bass is rich, but not too strong. Vocals across the audio spectrum glisten with punctuated clarity. AirPods Pro sound a smidge warmer with a more stage-like profile, but I’d say the MW08 sound better no matter if I’m listening to Guns N’ Roses, BTS, Chopin, or Marshmello. Their splendid audio doesn’t surprise me — they use 11mm Beryllium coated drivers.

The weakest part about the MW08 in regards to sound quality is the Ambient mode. Compared to Transparency on AirPods Pro and ambient mode on the Galaxy Buds Pro, it’s not as good on these Master & Dynamic buds. External sound and voices are not as clear and there’s a slight (but noticeable) notable hiss in both of the “Voice” and “Awareness.” This isn’t a crippling flaw by any means especially if you don’t use ambient mode often like me, but important to note.

As much as I appreciate the simplicity of AirPods Pro, I’m constantly wishing they had volume controls. Asking Siri to adjust the volume is too slow and I don’t like fishing my phone out of my pocket whenever I want to change the volume. The MW08 have physical volume buttons on the left earbud that solves this without adding unnecessary bulk to the design. I like this and I want to see more wireless earbuds include physical volume controls. The controls are not perfect — they seem to control the volume in larger decibel increments than my iPhone 12 Pro and recent OnePlus 9 Pro’s system controls allow for — but I still prefer to have them than not. I really hope Master & Dynamic can fix this in a software update — it might drive some people mad. Other wireless earbuds like the Pixel Buds and Galaxy Buds Pro have gesture-based controls for changing volume, but nothing beats the tactility and confidence of physical buttons.

The MW08 are Master & Dynamic’s first audio product to work with an app — the M&D Connect app for iOS and Android. It’s a beautifully designed app and minimalists will love it. But it is really lacking and unreliable.

All of the buttons are textual. I get that the company was going for a really simple design with all of the settings on a single screen as opposed to tabs or b sted pages, but a little more padding between each features text button would go a long way in preventing mistaps (which happened more often than I liked). Or find a way to use minimalist icons or both.

The main screen only shows battery life for both buds. Not the levels for each bud or even how many hours are left in the charging case. I wish the app had an EQ or at least some presets to adjust the sound profile. That’s kind of the whole point of an app. Maybe something for a software update?

The app’s reliability has also been hit or miss for me. More often than I liked, the app would say the MW08 earbuds were connected and so would my Bluetooth settings, but then sound would come out of my phone’s speaker instead. Other times, my Bluetooth settings would show two instances of “M&D MW08” and I could connect both of them; disconnecting from one of them would sometimes break my Bluetooth connection and force me to have to put the buds in pairing mode again. And on the day of publishing this review, a new software update wouldn’t go through even though an update a week earlier did.

I reached out to Master & Dynamic and a spokesperson for the company told me the bugs and reliability issues I’m experiencing are not ones they’ve heard of so I might have gotten a bum version. That does happen with review units, but it’s possible some people might experience the same issues with retail units. The issues could also be software-related with the latest version of the app 1.0.3. AirPods Pro are not immune to hardware or software issues; Apple has a service program for defective earbuds.

Ball is in Apple’s court

Aside from the sometimes janky app connectivity, I really like Master & Dynamic’s MW08 wireless earbuds. I much prefer their fin-free ear tip design (a departure from the MW07 Plus and Go) and the clean ceramic design isn’t as gaudy as the marble on the MW07’s in my opinion. They’re also IPX5 water and sweat-resistant so you’ll have no problems running or working out with them. The AirPods Pro-like case is also easier for taking the earbuds out compared to the flat lid case on the MW07 buds.

Battery life and sound quality are the two top reasons to spring for MW08 over AirPods Pro. Master & Dynamic has set the bar really high, especially on battery life — at $299 it had to. They’re more expensive than AirPods Pro, but $50 is not much more to pay for double the battery life.

They’re premium by every definition and so well deserved.

I said earlier that these buds don’t necessarily kill AirPods Pro and here’s why. Apple’s best wireless earbuds have Spatial Audio (one of the most underrated features), more reliable connectivity between iOS and Macs, and wireless charging. The MW08 has fast charging (50 percent or 6 hours of listening time in 15 minutes) and it’s faster than the AirPods Pro (1 hour of listening time in 5 minutes). But $299 wireless earbuds and no wireless charging stings.

It’s been almost two years since AirPods Pro came out and the competition has been relentless. I’ve reviewed just about all the most popular wireless earbuds that go head-to-head with the AirPods Pro and the MW08 are the best ones yet. They’re premium by every definition and so well deserved. The stakes for premium wireless earbuds have been raised again. Apple really needs to bring it with battery life in second-generation AirPods Pro or it’ll get slapped around by buds like the MW08.