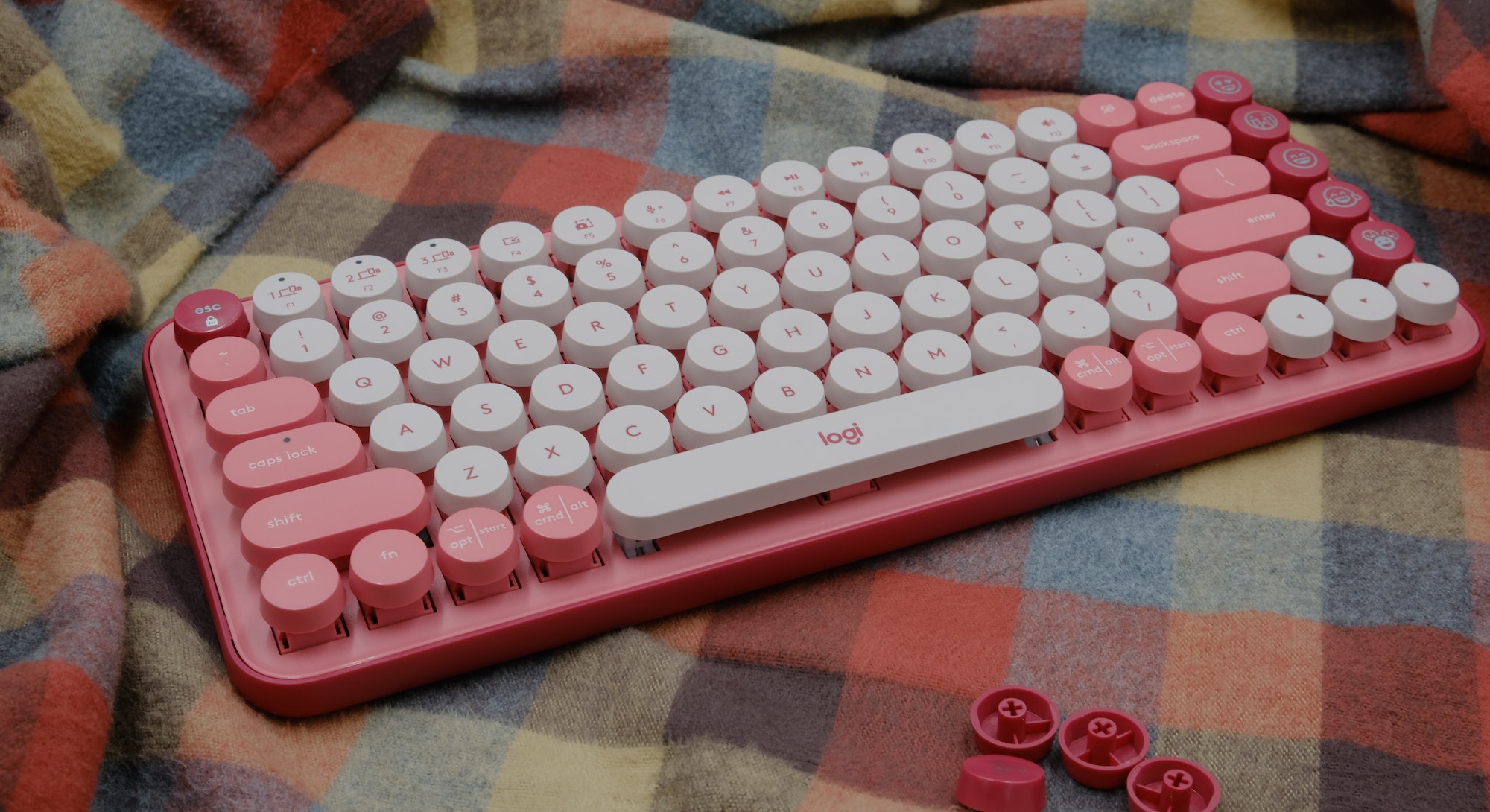 If you’ve ever felt like your keyboard wasn’t unique enough, or that it didn’t encapsulate your quirky and colorful style, then Logitech has the keyboard for you — as long as you don’t expect it to be fun to type on at the same time.

The Pop Keys is a brightly-colored productivity-oriented Bluetooth mechanical keyboard with a 75% layout and a side row of dedicated emoji keys. According to Logitech, the Pop Keys’ dedicated emoji keys, along with its colorful typewriter-like aesthetic, is meant to appeal to Generation Z by allowing the owner to “showcase” their “style and individuality.”

The keyboard uses recolored TTC Brown tactile switches with red housings placed in a low-profile case with no internal silencing, resulting in a simple and uninteresting construction that’s average for a $100 mechanical keyboard.

Tough to type on

As someone with a lot of experience with mechanical keyboards, it doesn’t feel good to type on.

The keyboard’s switches are a clone of the well-known (and often-mocked) Cherry MX Brown, a tactile switch that many consider to be unpleasant and barely tactile when compared to higher-end tactile switches like Holy Pandas or Zealios. Because of this, the switches are fairly scratchy (as far as I can tell, there is no factory lubing) and the tactile bump is incredibly weak.

On top of this, the decision to use circular keycaps is strange. Because they’re different from most traditional keycaps, and because they lack any form of sculpting to guide your fingertips into the center of the key, you’ll often end up accidentally pressing two keys at once when typing on this keyboard.

More than that, the keycap choice just seems weird. Countless brands have tried and failed to have circular, “typewriter-style” keycaps, and that’s all for one reason: they aren’t pleasant to type on. There’s a reason keyboards evolved to have sculpted, square keycaps as opposed to the circular keycaps that were popular on early typewriters: they feel natural to type on and don’t waste any space on the keyboard.

On Monkeytype’s 30-second standard English test, I was able to get around 86 words per minute, which is around 14 WPM lower than what I average on my Leopold FC660c, a tactile keyboard that I’ve outfitted with traditional Cherry-profile keycaps. While I’m sure one’s typing speed would increase over time with the Pop Keys, this still shows how awkward typing on this keyboard is compared to a traditional mechanical keyboard.

In addition, the legends on the keycaps seem to be pad-printed, resulting in a noticeable raised portion at the center of each key that feels unpleasant to type on. These legends probably won’t last as long as other printing methods like dye-sublimation, where dye is embedded into the keycap using heat, resulting in a type that almost never wears away, or double-shot molded, where text is made of a second type of plastic and is physically unable to wear away unless the plastic of the keycap is worn down completely.

Another result of the strange keycaps is the Pop Keys’ sound profile: combined with the keyboard’s hollow, low-profile case, the typing sound of the keyboard is plasticky and high-pitched. Since the stabilizers have not been lubricated in any way, and since it would be nearly impossible to do so, any keys that use a stabilizer sound incredibly rattly — especially the space bar.

Opening up the Pop Keys, it seems intentionally hard to disassemble — multiple screws are hidden under adhesive feet, and there doesn’t seem to be an easy way to remove the plate and PCB from the outside case without breaking the keyboard. Replacing a broken switch would likely be difficult, if not impossible.

Despite that, the screws that hold this keyboard together are 50mm T6 screws, a fairly nonstandard type that gives the impression this keyboard isn’t meant to be taken apart. The inside assembly isn’t super interesting. The switches are on a plate that’s soldered to a PCB, and the plate-PCB construction is screwed into a case. The only unusual thing here is the colored plastic sheet that goes over the plate and snaps into the bottom case.

Instead of having a rechargeable battery, the Pop Keys is powered by two AAA batteries. Because of this, the keyboard can’t be recharged and instead will require you to search around your house for a pack of batteries once it runs out. If the Pop Keys is meant for a Gen Z market, I’m sure they’ll be disappointed that this keyboard chooses the less eco-friendly option for power. However, Logitech does claim that the keyboard’s batteries can last for up to three years worth of use.

Let’s get it out of the way: emoji keys likely won’t be a major boon to your workflow. Sure, they’re a fun gimmick, but they’re probably only going to be used for casual conversation, and apps like Slack and Discord already have systems for typing emojis that work just as well.

Besides typing emoji, the keyboard is fairly useful and utilitarian. The emoji keys can be reprogrammed to any individual keystroke or multi-key input, and they can be reprogrammed to open up a webpage in your default browser when pressed. While I did have the occasional issue with the keys not remembering what I set them to, it was easily fixed by resetting the keyboard’s macros.

In addition, the function row’s default actions are all useful. Being able to play and pause media, swap between three Bluetooth devices, take screenshots, and adjust volume with a single press is convenient. However, all of these functions except one are also available on the MX Keys, which is a fantastic keyboard. The one useful function exclusive to the Pop Keys is the minimize button, which can minimize and reopen all of the windows on your desktop.

Overall, the Pop Keys is a practical keyboard, but its utility is about on par with the MX Keys unless you type a lot of emoji (who am I to judge if you do?). In addition, the MX Keys Mini’s rechargeable battery and its slim, portable form factor make it much more user-friendly.

The Pop Keys is clearly meant to bank on the same artificial nostalgia as products like the Polaroid Go, creating a retro look that’s reminiscent of what used to be cutting-edge tech. Logitech even referred to the keyboard as having “retro-style mechanical typing,” which is an odd phrase to use considering the switches feel nothing like either a vintage mechanical keyboard or a quality typewriter.

The keyboard does have a retro aesthetic and is in tune with the modern Instagram influencer look, so much so that a few of my friends said they would use the keyboard based on looks alone. Along with that, it’s hard to get past the keycaps — the circular shape is ultimately down to preference, so I won’t bash it, but the legends have clear outlines around each letter and the chrome printing on some keys just looks bad.

While the colored switch housings are incredibly cool, they end up being disrupted by the keyboard’s generic stabilizers made from white plastic. When looking at the keyboard from the front or the side, they stick out like a sore thumb. Especially considering how common colored stabilizers are within the custom keyboard community, having stabilizers that match the switch color and/or the overall keyboard’s color scheme would have been nice.

The Pop Keys don’t look bad from a distance (if you like the general concept), but a close inspection reveals countless small details that look low-effort or cheap. If you’re particularly detail-oriented with your keyboards, this likely isn’t the one for you.

Quirky, but not quality

While the look of the Pop Keys is cool and trendy, it’s basically all it has going for it. Almost all of the same functions, including multi-device Bluetooth, can be found in Logitech’s MX Keys Mini for the same $100 price (or the K380 for $40). It doesn’t feel great in-hand, and the switches are pretty much the same as Cherry MX Browns.

If you really want a keyboard with this specific aesthetic and the color schemes on offer then the Pop Keys is a good choice, but for anything else — even typing emoji — there are better options from other programmable keyboards, mechanical or not.

Or you can always just press Win+. or CMD+Ctrl+Space Bar (globe key on newer Mac keyboards) to pull up the emoji menu.