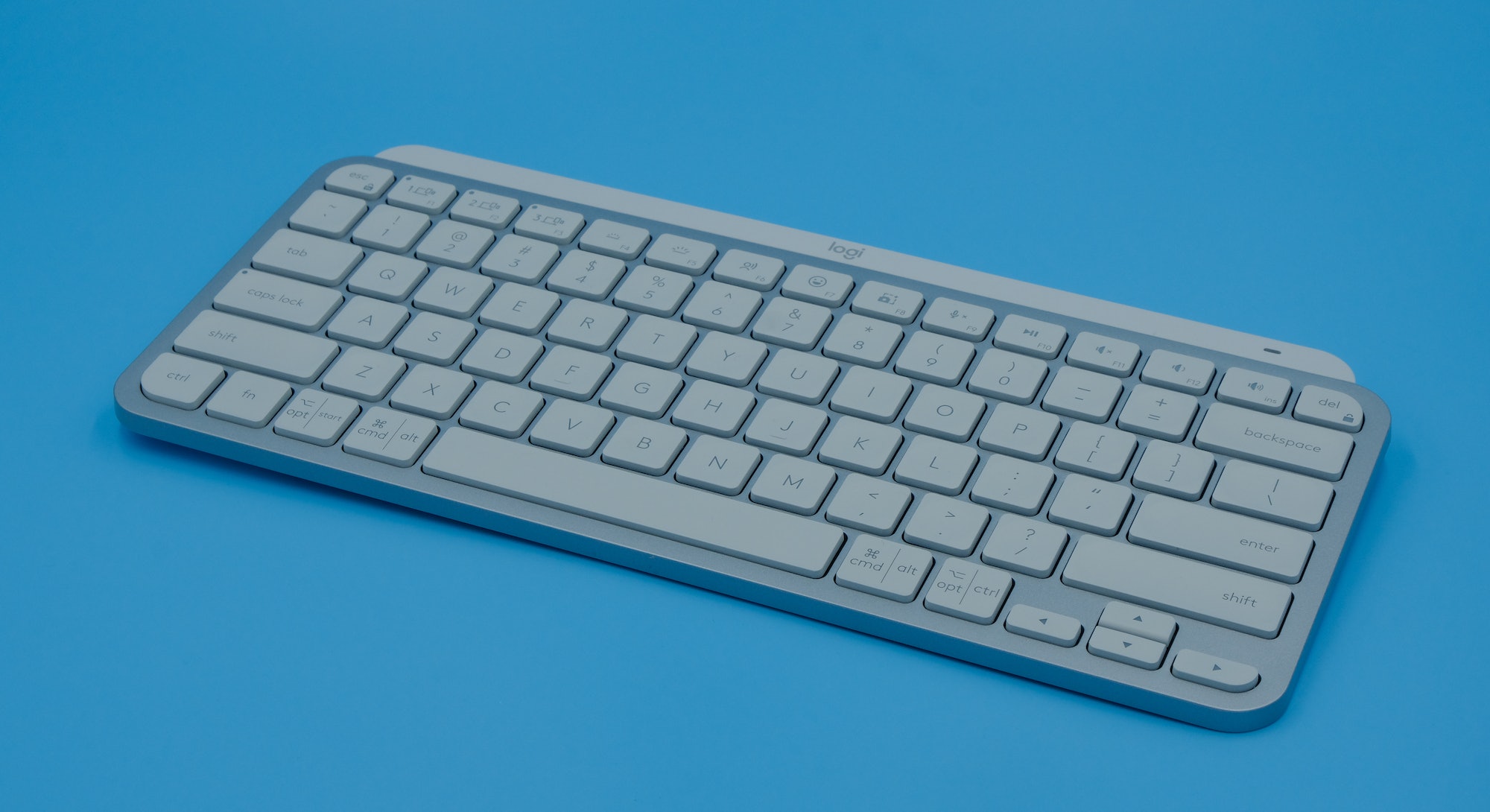 Logitech’s latest productivity-oriented keyboard, the MX Keys Mini, is a 60% scissor-switch keyboard designed to be used across multiple devices at once.

The MX Keys Mini is basically Logitech’s take on the Apple Magic Keyboard. With a 60% layout, scissor switches, Bluetooth compatibility, and an imitation of the Apple aesthetic, the keyboard seems to mirror almost every aspect of Apple’s now-iconic keyboard.

So this begs the question: Does the original need improving? It’s stood the test of time and is generally accepted as “good enough” to keep using instead of swapping out for a better keyboard. But is “good enough” really good enough?

The MX Keys Mini answers that question: Priced at around $100, the keyboard matches the Magic Keyboard’s price and, despite some shortcomings, practically outdoes the keyboard in every way.

The MX Keys Mini uses traditional scissor switches (similar to those found in a laptop keyboard) and sits at a 6.5-degree angle. This is a bit more than the traditional 5-degree angle of many mechanical keyboards, and a lot more than the average laptop, which sits at around zero degrees. In addition to this, the keycaps are sculpted to have slight spherical divots, which Logitech claims are “shaped to your fingertips.”

The actual switches are thin, easy to press, and have incredibly short travel. And unlike most scissor switches, they feel crisp and comfortable to type on. These switches remind me of Topre — a high-end mechanical switch that uses a spring underneath a rubber dome and is often considered a better version of traditional rubber domes, since they both have a more “satisfying” and tactile typing experience than their everyday equivalent.

The keyboard’s typing experience is still miles ahead of most laptops, though. Both the slight angle of the keyboard and the sculpted keycaps.

Personally, I like the look of the MX Keys Mini. It’s simple, robust, and tunes into the Apple aesthetic without overdoing it. And in addition, the other colorways — graphite, rose gold, and black — all bring something to the table that the traditional white doesn’t. (Apple does have color-matching Magic Keyboards, but those are only available with the 24-inch M1 iMacs, and aren’t sold separately… yet.) Of course, the large battery/Bluetooth bump on the back is a bit awkward, but the keyboard’s overall clean and simple look more than makes up for it.

The keyboard’s backlighting and indicator LEDs both look great, too. They’re simple and to-the-point, and the smart illumination — which turns off the board’s lights until your hands come close to it — works incredibly well.

The MX Keys Mini’s main selling point is its workflow optimization. The keyboard is able to swap between multiple Bluetooth-enabled devices at the press of a button. In addition, the keyboard uses multiple keys in the function row to increase/decrease volume, play/pause/skip media, screenshot, and type emojis.

In daily use, all of these features are incredibly useful, especially when they can transfer between devices and still function. In my testing, all of the function keys maintained functionality across Windows, macOS, Android, and iOS devices.

But if you’re primarily working on Windows, these keys won’t provide a massive benefit unless you have trouble remembering multi-key commands. Most of the function keys replicate pre-existing keyboard commands, such as Win + “.” for the emoji menu, and Win+Shift+S for taking a screenshot. Because of this, I’m also not sure whether these commands will continue to work across different builds of Windows.

However, if you find yourself regularly using both Windows and macOS while only being familiar with one (like I am), these options could be incredibly useful for maintaining a workflow across devices.

While Logitech advertises copying and pasting across devices on the MX Keys Mini’s product page, this doesn’t seem to be possible using the keyboard by itself. Instead, the keyboard has to be connected with a Logitech Flow-enabled mouse or trackball that can swap between devices, and both devices need to have the Logitech Options app installed. I spent about 30 minutes trying to figure out how to get this to work before realizing that I wasn’t able to use it, and was disappointed by the need for a second device for an option that would have been incredibly useful on a keyboard.

The keyboard’s battery lasts incredibly long. Logitech claims that the battery can last 10 days with the LEDs on, and during my testing, the keyboard never even came close to running out of power. Even if you’re using the board constantly, you likely won’t have to worry about it dying as long as you top up the battery once a week.

The main issue this keyboard poses is that it only works with Bluetooth. The USB-C port on the back is only for charging and can’t be used for a hard-wired connection to a device, which sucks if you’re going to be using an older workstation or a device that isn’t Bluetooth compatible. Instead, you have to use a receiver that’s sold separately ($15).

Overall, the MX Keys Mini’s build quality is… good enough. It works, although I do have some concerns.

While the keyboard’s case is clearly designed to look like brushed aluminum, it’s actually made from a textured plastic. Because of this, the keyboard has a fair amount of flexibility and isn’t particularly rigid. While this isn’t great for typing, it also means that the keyboard’s case won’t crack as easily during transport.

The keycaps themselves seem incredibly high quality, with a fantastic matte texture that both looks great and feels comfortable to type on. While I don’t know how well this texture will hold up over time — it could eventually turn smooth and glossy — it does seem to be fairly resilient. In the same vein, the legends on the keycaps likely won’t wear away anytime soon: Instead of being printed on top of the keys, the keys are made of a transparent plastic with a white coating on top of them to let light shine through.

The MX Keys Mini’s internal assembly doesn’t seem all that bad, from what can easily be observed: It has a metal plate that extends through the entire keyboard, which seems fairly promising, and it uses a separate daughterboard that contains the battery, Bluetooth, and a few other components. The rest of the keyboard seems incredibly difficult to get into, though — the cables, countless screws, and semi-loose parts prevent the back of the keyboard from being removed easily, which could make any repairs incredibly difficult.

The keyboard’s entire reliance on wireless is concerning. If the Bluetooth system inside of the board were to suddenly fail, it would become entirely unusable. That’s not the case with Apple’s Magic Keyboard, which works wired with a Lightning-to-USB-A/USB-C cable.

Overall, the MX Keys Mini does a lot, and it does most of it well. Especially when compared to its primary competitor, Apple’s Magic Keyboard, it feels like a genuine improvement. More than that, the keyboard feels fantastic to use as long as you know what you’re getting into. It’s not a boutique mechanical keyboard by any means, so it won’t have the ultra satisfying mechanical feel, but it does have a high-quality typing experience that’s well above your typical scissor-switch keyboard.

The MX Keys Mini is a fantastic workhorse keyboard that can function across multiple systems and setups and fulfill multiple work cases. More than anything else, it’s a modern-day workhorse that can handle almost anything you throw at it.

The MX Keys Mini is a fantastic workhorse keyboard.

While it’s not perfect, nor is it particularly exciting, it fulfills its niche and does so fantastically. If I needed a small, portable keyboard for working across multiple systems simultaneously, or even just a thin and simple keyboard to use as a daily driver, the MX Keys Mini would most likely be my pick.