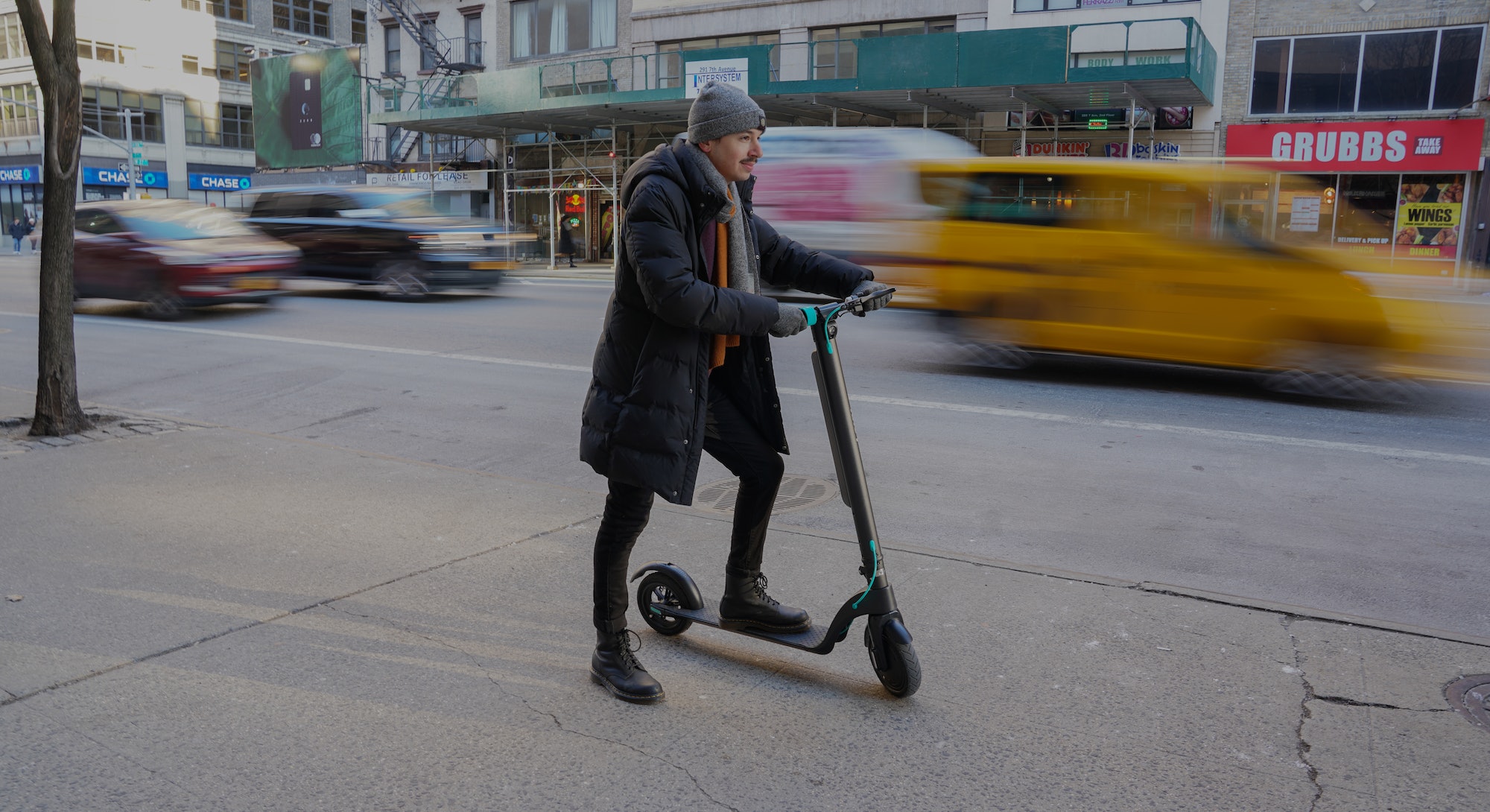 I don’t mean literally (I’m actually on the cusp of being 30), but spiritually, I am closer to prune juice and early-bird specials than I am to house parties and, I don’t know, what do kids like these days? Crocs?

As a self-inducted member of the spiritually geriatric, I prefer things to be simple. I like my video games mindless, my coffee black, my friends few, and my lawn non-existent. In that same vein, I also happen to really like the Levy Electric Scooter.

You see, The Levy Electric scooter, not unlike a hot cup of black diner coffee, is blissfully simple. I received mine via FedEx inside a box dropped straight onto my porch, and not 10 minutes later, after some futzing around with the handlebar assembly, I was riding the base model of the company’s electric scooter at satisfyingly tepid speeds.

Levy says its aptly-named scoot tops out at 18 mph, though on my first journey of more than 10 minutes in duration, I never reached speeds above 15. A part of me feels a pang of desire when I recall the roaring 37 mph highs of the Apollo Ghost, but that moment passes faster than you can utter the words “thrill-seeking behavior” through a mouthful of chamomile tea.

Levy’s low-key electric scooter is simple enough to be perfect.

Did I mention that this scooter is so freakin’ light, which is great because my back isn’t what it used to be — probably all the computer hunching and stress-sighing. Relative to boxing categories, Levy’s electric scooter is about a featherweight, clocking in at 27 pounds. When I carry it down all 25 of my steps to the sidewalk, I feel like the Hulk in terms of both strength and sheer enthusiasm for how incredibly easy my journey is about to be. Hulk scoot! (But not too fast or long, he’s got a mountain of work and sleep to catch up on.)

Looks-wise, the Levy Electric Scooter is defined by millennial with money minimalism. It doesn’t offend or intrude, but when I ride it, or cast my screen-glazed eyes on its frame, I believe (mistakenly) that I (it) look(s) cool.

My fixation on simplicity might sound intellectually or physically lazy here, but I assure you, with all honesty, it absolutely, totally is.

The scooter, if you’re not obsessed with having your gadgets be black, does come in other colors, including green, red, and blue. I’ve not seen those colors firsthand, but if they’re anything like the scooter I used, I imagine they’re perfectly simple... there’s that word again.

My fixation on simplicity might sound intellectually or physically lazy here, but I assure you, with all honesty, it absolutely, totally is. And that’s okay! Life is hard, and simple products that just work — sometimes in literally getting you from point A to point B — make it just a little less aggravating.

Levy clearly prides its scooters on being simple. Take, for example, the modular battery. With just a press of a button and a lift of your hand, you can remove the scooter’s battery from the stem and plug it in to charge or even swap it for a juiced-up replacement.

The easily removable battery also sets riders up for some other really nice perks like being able to easily pop it in a backpack — a move that could make it a lot easier to carry the rest of the scooter by hand. Additionally, if you’re feeling extra cautious you could take the battery with you if you should decide to lock up your Levy in a public place. Theoretically, at least, that could deter thieves looking to scooter-nap your ride when you’re not around.

The convenience of Levy’s swappable battery does come at a small cost. Maximum range falls on the shorter side of the electric scooter spectrum, hitting about 10 miles, which means if you’re thinking of riding for longer distances it could be worth it to invest in another battery.

If you’re concerned about battery consumption, or just want to take it very slow, the Levy also has cruise control and three ride modes — beginner, eco, and sport — that allow you to travel at speeds of your choosing. A sharp LCD display allows you to monitor both your speed and battery range.

Don’t let Levy’s minimalist design fool you, this scooter is as thoughtful as its big-name competitors.

Whatever hangups you may have about the range should be smoothed over by yet another point for Levy design: the stem. If you’ve ridden enough electric scooters you know that stem design can be make or break. Wobble is the enemy. Once again, however, Levy wins the point. Not only is the stem easily locked and unlocked, it’s as steady as a steel beam, even on the rocky, moon-cratered streets of New York City.

When you’re ready to fold the stem down, you can simply unlatch and bring a small hook toward a cavity on the back fender. Depress the fender slightly and align the hook until it catches, and you’re good to go. As someone who recently reviewed the Apollo Ghost and its eternally finicky stem and clamp, I can’t tell you what a nice surprise Levy’s reliability is.

For a scooter of Levy’s size and weight, it also performs fairly well on city streets. The standard 8.5-inch tube tires aren’t exactly ready to mow anything down, but they’re more than sufficient for most commutes. I even managed to inadvertently hit a few small potholes during my riding, and was pleased to find the impact (while definitely a little stiff) didn’t feel dangerous.

Speaking of safety, Levy’s scooter also has built-in headlights and taillights that help keep riders visible while scooting in the dark. Lights aren’t exactly a premium addition, but they do tend to get overlooked on cheaper scooters looking to cut cost.

At a base $500, you can’t — rightfully, at least — call Levy’s scooters “affordable” for the masses, but considering what competitors, like the Unagi’s $790 Ultralight (which, by the way, weighs just one fewer pound than Levy’s scooter) are offering in the same range, I’d classify the Levy Electric Scooter as a definitive good deal.

And if you want to upgrade, you can. The base Levy model can also be upgraded with 10-inch tubed tires ($530) or 10-inch solid tires ($549). If you’re scooting around streets as unkempt as the ones in my neighborhood in Queens, I’d venture to say you won’t regret spending a little more money on premium tires.

At the risk of involuntarily rolling some eyes here, I want to point out that there are some things in this life that you can’t put a price on. What those things are will differ from person to person, but in my case, as you’ve probably already guessed, simplicity is crucial. So, if you’re as simple-minded as I am (either literally or figuratively), Levy makes buying an electric scooter an easy choice.

This article was originally published on Feb. 2, 2022