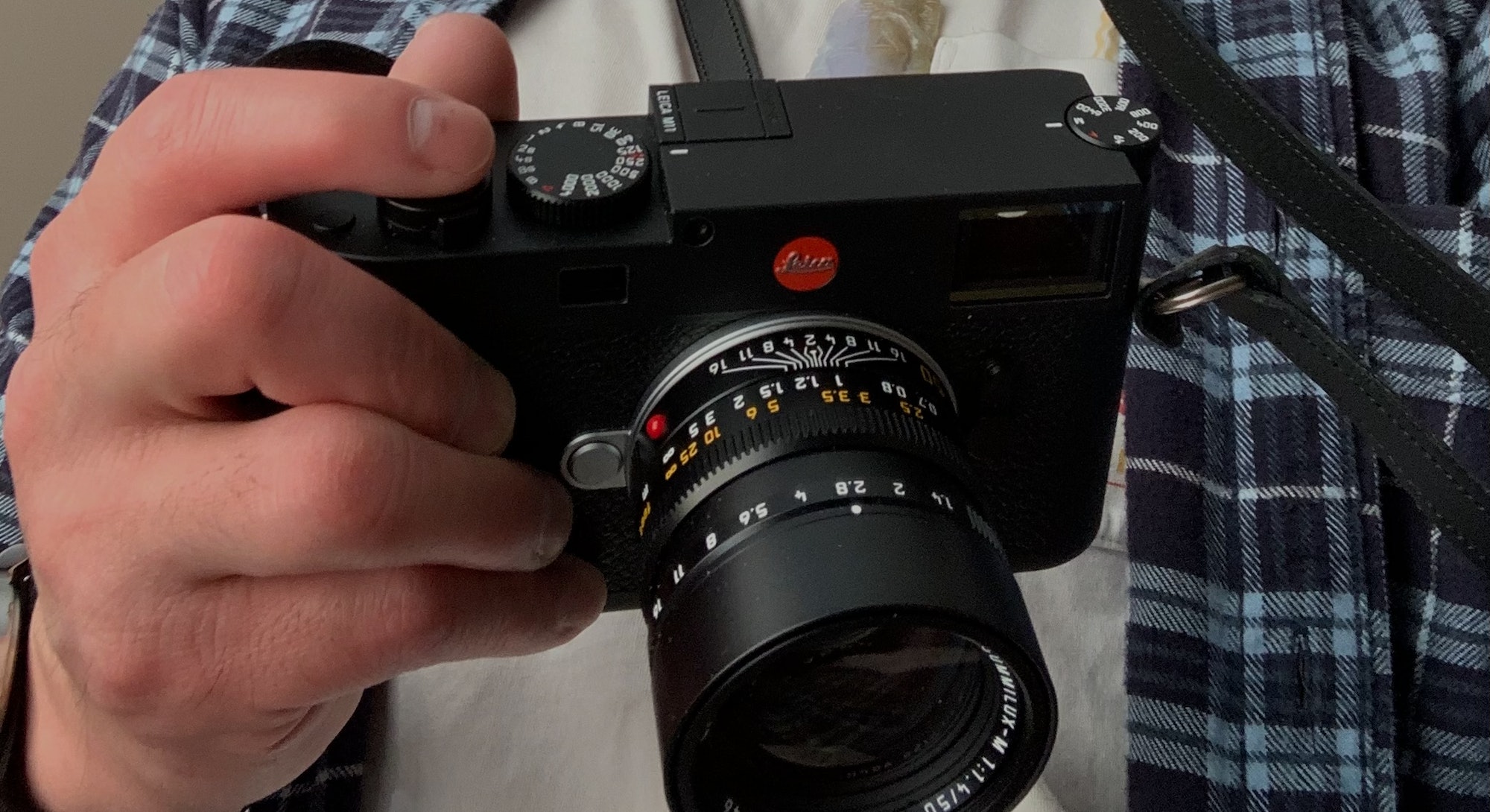 After playing around with the Leica M11 for about two weeks, I can easily say that it is one of the most rewarding cameras I’ve ever shot with.

It’s definitely not the easiest camera to learn how to use, but once you get the hang of it, every click of the shutter just feels so satisfying. Since the M11 is a rangefinder camera, I had to give up my dependence on autofocusing and quickly adapt to manual focus. This was for sure the hardest part to get used to, but even so, the M11’s minimalist design really spoke to me. It feels like every button and dial on the camera was carefully selected, leaving no room for any unnecessary bits.

You get your adjustable shutter speed and ISO dials, a nice tactile shutter button, menu buttons and three customizable options through a programmable button next to the shutter, the function button, and the scroll wheel. Personally, I didn’t enjoy using the stock ISO dial, since you had to first push up the dial and then adjust the ISO. Instead, I programmed pushing down the scroll wheel to bring up ISO settings, to which I could then thumb left and right to adjust, so it felt more like the camera that I was used to shooting.

Leica's M11 features a 60-meagpixel sensor, a native ISO of 64, and internal storage, all wrapped in a classic design.

Leica made some very important design changes with the M11, which is coming out two years after its last M series release, the M10-R. In one of the biggest departures from the previous M-series models and Leica’s heritage-first design, the M11 no longer has a bottom plate that you have to screw off to get to the battery or SD card. The bottom plate on the M10-R feels more nostalgic than functional to me, since it adds an extra step to accessing your battery and SD card. Sorry to all you Leica purists out there.

And before we get any further, I do have to address the elephant in the room, which is the M11’s pricetag. At a cool $8,995, it’s probably way out of the budget for any amateur photographer, myself included. But how exactly is Leica justifying that restrictive price? Well, the M11 features a 60.3-megapixel sensor, easier connectivity through the built-in USB-C port, and 64GB of internal storage, with roughly 54GB of it usable.

I did feel kind of sketched out carrying around a camera that’s worth more than my savings account.

After using the M11 for a while, I totally get why Leica photographers seem so smug with their cameras that cost almost as much as a used car. The M11 does an incredible job at capturing light and makes you feel like you’re creating a scene rather than just snapping a shot. Along with the nearly $4,500 Leica Summilux-M 50mm f/1.4 lens that Leica provided me, the colors and light that the M11 produced felt like the closest replication to what my eyes saw. But the question remains, is it worth it?

It seems like the M11 is the perfect camera to carry around with you for street photography. The low-key look feels like it doesn’t attract too much attention (not counting the red dot that screams “I’m worth a crap ton of money”) and while it does have a nice weight to it, the M11 doesn’t feel like a burden to carry around and shoot all day with.

I have to admit that I was pretty out of my element using the M11 in the streets. As I said before, I’m not used to shooting with rangefinder cameras and I found myself fumbling around with the settings more than anything. That inexperience caused me to lose the exact moment of the shot I wanted several times, but that shortcoming really just falls on me. I’m sure with more practice, the M11 would serve as a great go-to camera for walking around street photography, especially if you have experience with zone focusing. I should say though, that I did feel kind of sketched out carrying around a camera that’s worth more than my savings account.

When it came to shooting landscapes, that’s where the M11 felt particularly at home for me. I was afforded the time to really perfect the settings and nail the focus before firing off the shutter button since most landscapes don’t really have moving elements. There was something so gratifying about peering through the viewfinder, lining up the ghost image to land the proper focus, and finally hearing that sweet, subdued shutter click. With the M11, it felt incredibly satisfying to hear that click after working to find the perfect framing and exposure settings.

The 60-megapixel sensor was also able to capture tiny details within my shots, like birds flying off and withered leaves on a tree branch. I admit that 60 megapixels is probably a little overkill and sometimes it really just serves to show how you were just a hair off on the focus. But, Leica designed the M11 with “Triple Resolution Technology” so you can choose between shooting 60, 36, or 18 megapixels, while still using the full range of the sensor. I tested a couple shots with the 60- and 18-megapixel options, to which you can really only tweeze out some quality differences when you zoom in super close. But whatever megapixel count you’re shooting at, I doubt anyone on Instagram is going to be pixel-peeping that hard.

You might be wondering how much memory 60-megapixel shots eat up, and it’s a lot. Just using the roughly 54GB of internal storage, the M11 guesstimates that you have around 373 shots if you’re shooting both DNG (RAW) and JPG simultaneously in 60-megapixel mode before you fill up the storage space. On average, a 60-megapixel DNG weighs in at around 70-75MB; some as much as 100MB. JPGs are way smaller at around 20-25MB. You do the math and decide whether you wanna save in both RAW and JPG or just one of the formats.

The Leica had no trouble with low-light situations, like on this rainy day just around sunrise. Jackson Chen / Input
I was able to recover a lot of detail in post even after shooting basically in the dark with the M11.Jackson Chen / Input

But if you’re shooting in the 18-megapixel mode, you get around 1,000 shots when shooting both DNG and JPG. That’s a huge difference and something I learned the hard way when shooting inside my poorly-lit climbing gym.

I gave the M11’s continuous high-speed shooting mode that shoots at 4.5 frames per second a shot so I could capture all the movements of a climber. I was more focused on hitting the right moment during a climb that I was recklessly firing off shots, not realizing that I was filling up both the internal storage and my SD card very fast. But lesson learned that this was a scenario where I should’ve bumped down the megapixel setting to 36 or even 18.

Even in a climbing gym where pretty much all the lighting is fluorescent and leaves a sickly yellow cast on everything, the M11 could still hang. Leica bumped down the native ISO of the M11 to 64, but shooting between ISO10000 and ISO16000 still felt acceptable with only a somewhat-noticeable amount of noise. This was particularly helpful since I was stuck at around 1/500 for shutter speed to make sure there wasn’t any blurry movement and around f/4 so that enough of the climber and the holds were in focus. When dealing with that yellow tinge from the fluorescent tubes, the M11 also did a decent job at correcting the white balance to make skin tones look a little more normal.

There were a couple of things about the M11 that I didn’t like. I’d prefer the grip of the camera to be more ergonomic, but to be honest, I don’t think Leica is going to be changing its classic look anytime soon in the name of ergonomics.

Another needlessly annoying part of the M11 has to do with transferring photos. Pretty much everyone uses high-speed SD card readers these days, but I was curious if you could transfer photos with the new USB-C port, by using the USB-C to USB-A cable that came with the Leica. This slower method of transferring photos by cable is possible but you have to switch the M11’s USB Mode in the menu to PTP instead of the MFI mode that was designed to recognize Apple devices.

I asked Leica if they plan on incorporating a mass storage device mode for the M11 and they, rather vaguely, said that they’re evaluating feedback for the M11’s connectivity and will provide more features with future firmware updates. In the meantime, you’re better off using an SD card reader.

Alternatively, you can go download Leica’s Fotos app through the App Store or the Play Store since the M11 also comes with a USB-C to Lightning cable that connects directly to your Apple device. But, I found this process of signing up for Fotos, pairing your device and the M11, then importing the photos, a bit tedious and inefficient.

With all that said, I still think Leica’s M11 is an incredible camera. Leica is known for putting out extremely well-built — handmade I might add — cameras that are adept at capturing light beautifully and the M11 is no exception.

This camera will probably outlast my lifetime.

I used to think Leicas and their red dot branding were not worth their unbelievable price tags. But after using the M11 for two weeks, I’ve at least begun to understand why they’re such highly-regarded cameras that command those insane prices. And if I ever do get lucky enough to snag an M11, it’s nice knowing that this camera will probably outlast my lifetime and still be usable with pretty much all of Leica’s lenses. Not to mention, Leicas tend to retain most of their value over time, something which can’t be said for Canon or Sony cameras. That’s not to say that I’m going to be dropping $9,000 (plus $4,500 for a Leica-made lens) for my next camera anytime soon, but I can now better appreciate the top-shelf quality that Leica’s cameras offer.