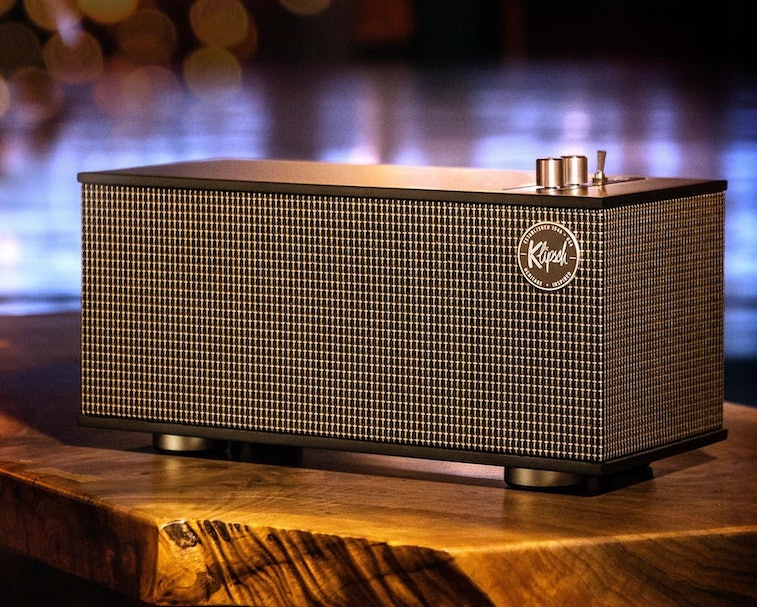 I’ve dabbled with the idea of being an Audio Guy — spending my days obsessing over my hi-fi setup, picking out the perfect pre-amps, or meticulously situating monitors for the optimal listening experience.

As you might’ve inferred from my word choice here (“dabbled” and “idea”), I’ve chosen to self-identify with other hobbies, which would be a fine choice if it weren’t for one cold, hard, inconvenient truth: hi-fi setup or not, I’m still an audio snob.

As a self-described audio snob, I’m tasked with elevating my music game at home under two major constraints: cost and convenience. Finding that Goldilocks zone in any product can be a Herculean task, but I’ve got a name that can make your search a little easier — for the uninitiated, I’m talking about Klipsch.

Klipsch might not be as immediately recognizable in the Bluetooth audio space as brands like Sonos are JBL, but what it lacks in household recognition, it delivers in quality and aesthetic.

On a superficial level, the Klipsch One II Bluetooth speaker first captured my attention with its design. Like a proper millennial, I’m a sucker for mid-century modern, and this speaker, which comes in both black and a vintage-looking wood grain, appeals directly to those sensibilities. Flourishes like a flip switch and tactile metal volume knobs are exactly the design choices that tend to open my wallet up.

Klipsch, unlike some of the other monoliths out there in the Bluetooth speaker world, is designed to blend into a bookshelf or TV console, which gives it snob points for aesthetic, as well as...

Sound quality — To give you an idea of where I was at in my Bluetooth audio journey, before purchasing the Klipsch One II earlier this year, my go-to was a 10-year-old portable cone from JBL.

The One II can also put out quite a lot of volume if you feel like having a party or driving your neighbors mad.

While it wasn’t hard to upstage my ailing speaker, I was still smitten with the extent to which Klipsch managed to do so. One of the most immediately apparent strengths is the One II’s low-end. A 4.5-inch woofer gives the speaker oomph and sought-after dynamic range.

Speaking of oomph, the One II can also put out quite a lot of volume if you feel like having a party or driving your neighbors mad. Even more important than the max volume, however, is the fact that the One II can fill a room (or small New York apartment like mine) without having to blast everyone away. Playing this speaker in my kitchen still gives me serviceable sound quality if I’m listening in my living room.

The One II has a stereo system with two 2.25-inch drivers that Klipsch says are “professionally tuned” by its audio engineers. I can’t verify that its tuning process is as magical as Klipsch makes it sound, but I can say for sure that its speaker strikes great balance of fulsome low-end and crisp mids/highs.

I rarely encounter a Bluetooth device that can be classified as “difficult” to set up, but it’s worth noting that the One II is also supremely easy to use. The speaker has Bluetooth 4.0 and connects to my iPhone 13 with ease. A knob on the top also serves as a button that can be pressed down to search for compatible devices.

If Bluetooth isn’t your thing, you can also use the One II as a stereo for your turntable with its built-in phono preamp and dual RCA input. To switch to line mode, just flip the (pleasingly click-y) switch. I haven’t personally used the One II on a turntable yet, but it's still nice to know that I could.

The One II doesn’t come with a lot of bells and whistles, which is fine, because I don’t want it to — what I really want is a speaker that sounds and looks great, and on that promise, Klipsch delivers.

Turns out, at least when it comes to Bluetooth audio, that you can be snobby and practical.