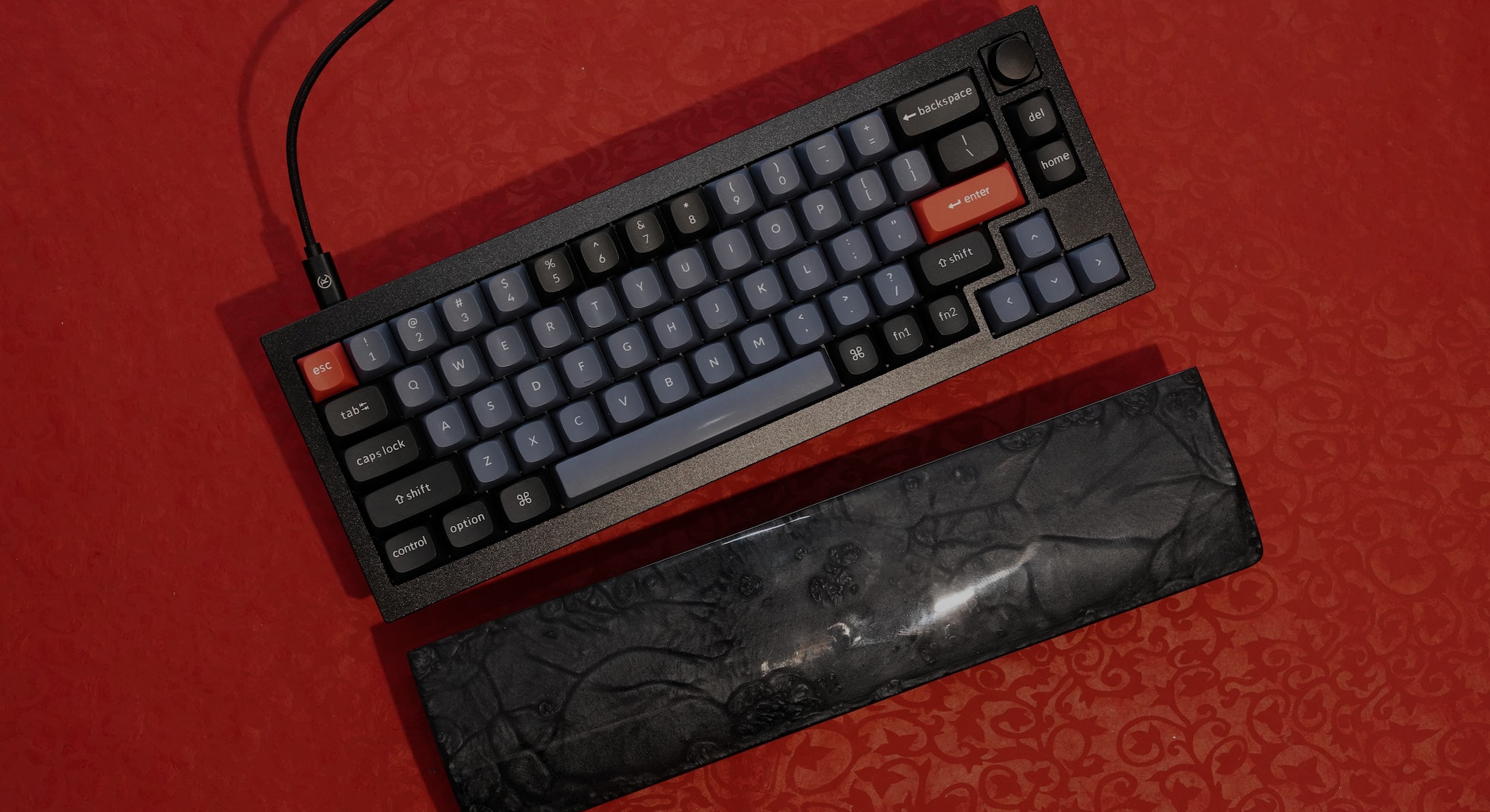 Keychron owes much of its enormous success to tech YouTubers and Instagrammers.

Had a YouTuber like Marques Brownlee (aka MKBHD) never featured the Keychron K2 in a video, Keychron might still be an obscure startup pitching its mechanical keyboards to enthusiasts. Following MKBHD's stamp of approval in late 2019, the $69 mechanical keyboard went out of stock on Keychron and Amazon and scalpers flipped them on eBay for over $100.

Overnight, everyone suddenly got a Keychron K2. Keychron K2s popped up in everyone's "desk tours." They became inescapable on Instagram. Keychron became a household name and vaulted itself ahead of established brands like Leopold and Ducky; many keyboard snobs bemoaned the consumerization of their beloved hobby with a keyboard that was hardly representative of the very best that mechanical keyboards offered.

That's the power of a YouTuber with millions of subscribers — viewers can be converted to customers by one, trusted review. While more serious mechanical keyboard nerds will thumb their noses at a mainstream brand like Keychron, I'm glad it exists to create "affordable" customizable mechanical keyboards like the new Keychron Q2.

At $179 fully assembled, with knob ($169 without knob), the Keychron Q2 is more than double what the K2 costs, and the same prices as the Q1 ($179 fully assembled, with knob) that my former colleague Craig Wilson (and just about everyone it seems) adores. While the Q2 likely can't compare to the custom-built mechanical keyboards made from guys like Nathan Kim aka Taeha Types, for the money and features, the hardware is more luxurious and the typing experience is more satisfying than what you get from other mainstream mechanical keyboard makers like Razer or SteelSeries.

The Keychron Q2 is a terrific 65% mechanical keyboard for Mac or PC.

The Keychron Q2 largely resembles a Q1 with the main difference being it has a more compact 65 percent layout compared to the Q1's 75 percent layout. Keyboard layouts seem to bring out the worst in people; everyone thinks their preference is "correct" and everything else is wrong. Ignore everyone and figure out what suits you.

Do you need F-keys? How about a numpad? Can you live with using different "layers" activated by a key combo? What you need is going to determine if you prefer popular sizes like full-size keyboard layout, Tenkeyless (TKL) aka 80 percent, 75 percent, 65 percent, 60 percent, or something even more compact.

I'm a full-size layout guy. As a writer and editor who works in documents and wrangles an unreasonable amount of spreadsheets, the numpad is essential. I also love having F-keys. If you're not F5-ing when a hot product drops, your L will only feel worse if you fail to secure a purchase.

Last year, I experimented with 60 percent keyboards — I picked up an inexpensive one like the $50-ish Royal Kludge 61. I hated it. The keyboard has arrow keys, but I can't stand how certain keys like the /? which also doubles as the ↑ key requires switching to a different layer; it's annoying for what I do.

I ultimately settled on a TKL keyboard — the V1 version of the Razer Huntsman V2 TKL that our keyboard guru Henri Robbins reviewed. For $80 on sale (normally $130), the price didn't break the bank.

After using the Q2 for the past 2.5 weeks, I can confidently say its 65 percent layout is as small as I can go. I miss the dedicated F-keys and the numpad on a full-size keyboard; Fn2+[number key] replicates them just fine. Besides, the Q2's premium angled aluminum case, gasket-mount design, and stock linear Gateron Phantom red switches (fully hot-swappable) are all so satisfying that I can live without the dedicated function row.

The doubleshot PBT keycaps have rounded corners compared to on the Q1. I like this aesthetic a lot — reminds me of old computer keyboards and feels better to my fingertips. The Q2 is compatible with Windows and maOS. I was hoping there would be an alternate Windows logo keycap in the box, but nope.

My favorite feature on the Q2 is the knurled knob in the upper right. It was supposed to launch with the Q1, but due to it requiring a brand new PCB, Keychron only just got around to shipping it last month. The knob comes stock on the Q2. Out of the box, it controls volume and pressing in plays/mutes your music. Like all the keys, the knob is fully customizable using QMK or VIA software (i.e. mapping it to scroll a site). The only thing that could make the knob better is if it was metal and not plastic.

Since I was using the Q2 pre-release, remapping the keys wasn't plug and play. I had to download a JSON file from Keychron's website and then import it into VIA. And even after doing that, VIA was sluggish to make the changes; the app crashed a few times. At some point, Github will approve the Q2's VIA code and the app will recognize the keyboard automatically. But in the interim, you'll have to manually import the JSON every time.

Keychron sent along blue and Gateron red and blue switches for me to try as well. I've always been a blue switch guy since their loud and clicky design keeps me in my flow when working. Lately, I've really been into brown tactile switches just cause they're a little bit quieter. I can't get enough of the Q2's linear Gateron Phantom red switches, though; they're not entirely quiet, but they are delightfully audible. Like keyboard layout, switches are entirely personal preference.

You can enjoy the Q2 without ever disassembling it.

The hot-swappable nature of the Q2 means the switches aren't permanent; change it up to suit your task, or if you're just bored with the same setup. Customization is what makes hot-swappable mechanical keyboards so much fun; it's like having high replay value in a game. All of the tools you need to open the keyboard are included. You can enjoy the Q2 without ever disassembling it, but taking it apart (even if it's just for a look at the gorgeous insides) is half the fun of customizable mechanical keyboards.

The Q2 is a sloped keyboard. The base is about an inch tall. I highly recommend getting a palm rest. Without one, your wrists might get sore from angling upwards. Keychron sent its $30 resin palm rest for me to try and it greatly improves the Q2's comfort. The resin isn't exactly anti-slip if your hands get sweaty; it also picks up fingerprints. I didn't try it, but I feel like the wooden version ($25) is the better option. Or get the best of both worlds with Keychron's half wood, half resin palm rest ($50). Or go third-party.

While I know my way around a mechanical keyboard, I'm not gonna pretend like I am deep in it like my colleague Henri or my boss Joshua Topolsky. I see the drops for boards and keycaps, but you won't find me in any Discords salivating. The beauty of the Q2 (and the Q1) is how approachable it is. It's a terrific keyboard whether you're a newcomer or have tons of experience with customizable mechanical keyboards.

If all you want is a pre-built customizable mechanical keyboard that looks great, types great, and is built great, the Q2 passes with flying colors. The Keychron Q2 is a mechanical keyboard I can easily recommend to anyone who doesn't want a larger 75 percent keyboard like the Q1. The plastic knob and the regular non-curly, non-aviator USB-C cable feel like cut corners, but they aren't deal-breakers.

The beauty of the Q2 is how approachable it is.

My former colleague Craig was right when he said he was looking for excuses to type on the Q1. I can confirm his truth after spending weeks with the Q2. The Keychron Q2 is arguably the most delightful customizable keyboard starting at $169 (again, without knob) that I have ever used; the non-Knob version of the Q1 costs the same so it’s really a matter of compactness preference. There are keyboards that cost more, but bang for buck, the Q2 is an all-around winner.