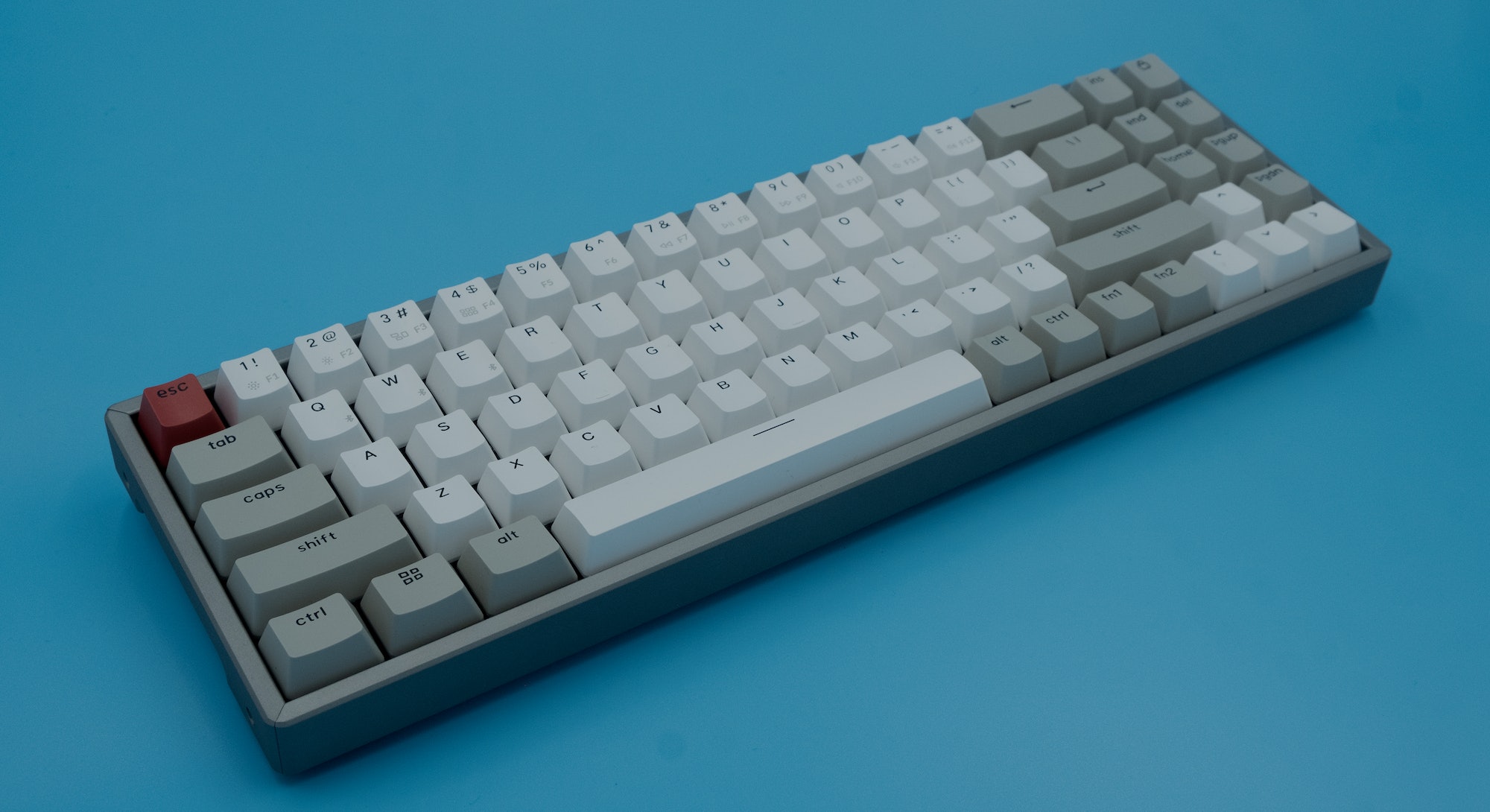 Getting into mechanical keyboards can be daunting.

There are so many types of boards, switches, keycaps, and mounting methods that it can be hard to pin down the one keyboard that will work best. (Thank god someone made keeb.gg to keep track of in-stock parts.) Often, it’s best to start with something fairly simple: It will provide a great starting point to figure out what you need without breaking the bank.

Keychron’s K14 is a great starting board in that sense. The company markets the K14 as a full-profile portable mechanical keyboard; similar to the Logitech MX Keys Mini, it’s fairly light at only 1.6 pounds. The board has a customizable 70% layout with hot-swap sockets, Bluetooth connectivity, and multi-device pairing. The non-backlit version ($59+) is available with Keychron’s own red (linear), brown (tactile), or blue (clicky) mechanical switches, and the backlit version ($64+) uses equivalent Gateron switches.

The keyboard has countless customization options.

In all honesty, the K14 is a budget keyboard. And because of this, the typing experience will leave a lot to be desired for the experienced typist. However, it does serve its function wonderfully. The construction is solid and features like multi-device Bluetooth and customizable lighting give the keyboard great utility for the average user. More than that, the keyboard has countless customization options that can fine-tune the typing experience.

The K14 has included keycaps for both Windows and Mac operating systems.

With doubleshot ABS keycaps, a rigid plastic/metal hybrid case, and a fairly traditional (and reliable) mounting method, the K14 is, by all means, a standard mechanical keyboard. Even the switches, which are either Gateron or Keychron’s in-house clone, are uncomplicated and will last forever.

There’s nothing inherently wrong with the K14. It has good switches and standard stabilizers. The case itself is made of plastic with almost no flex to it; there are four pieces of metal that attach on each side to provide a bit more rigidity without making the keyboard too heavy.

The models Keychron provided both use red linear switches. The silver model — a non-backlit option — uses Keychron’s own switches, and the black model with RGB lighting uses Gateron reds.

Keychron’s own red switches are disappointing. They’re scratchy, wobbly, and create a higher-pitched sound when typing. There’s definitely a reason that they’re the cheaper option between the two.

The Gateron switches felt far better than the Keychron switches. They were a lot smoother, had a more consistent keypress, and had much less wobble. Personally, I would choose the Gaterons over Keychron’s own switches any day, even if they do have a slight markup (~$10 more). However, the cheaper Keychron switches would be useful if you already have plans to upgrade to different switches immediately and don’t need a second set of good switches in the keyboard.

The K14’s main draw, for me, is the simplicity of its design. The keyboard uses a standard tray mount, where the PCB and plate are screwed into the bottom of the case, and has a fairly standard extended 65% (what Keychron calls a 70%) layout that is fairly similar to that of a laptop’s.

The keyboard’s Bluetooth connectivity is fantastic; it can connect to up to three devices and swap between them, much like a Logitech keyboard. It also works wired, something Logitech’s MX Keys Mini can’t do.

While there are some strange choices made with the layout, like the USB-C port placed on the side as opposed to the back, the overall design of the K14 makes a lot of sense. The two rows of keys include most of the same keys that a Tenkeyless (TKL board) like the Razer Huntsman V2 TKL would have, while still maintaining a much smaller form factor than a keyboard with a function row and navigation cluster. Also, the secondary functions of the number row, which include multimedia controls, screen brightness controls, multitask settings, and RGB controls are all welcome additions.

In terms of ergonomics, the K14 sits at around a four-degree typing angle, which can be raised using the two sets of feet on the bottom of the case. Once raised, the keyboard sits at either a six- or 10-degree angle. While this is entirely subjective, I found the base angle of the keyboard to be comfortable to type on when combined with the stock Cherry profile keycaps.

This typing angle also mixes well with Keychron’s wooden palm rest, which was sent along with the K14. It doesn’t line up with the keyboard’s front edge, and it doesn’t exactly match the vibe of the K14, but it does feel good to type on if you enjoy having some form of wrist rest, and it matches the length of the K14 perfectly — something that would usually require cutting your own rest from wood.

The keycaps are fairly thin and, as a result, both sound and feel worse than a thicker ABS or PBT. While this isn’t a major issue — a new set of keycaps can easily be installed — it is worth noting. Combined with the case, which has metal sides and a plastic bottom, the sound profile ends up being relatively high-pitched and plasticky. I can’t really complain about it given the low price, but it’s worth noting for anyone who particularly cares about keyboard sound.

Keychron advertises the K14 as a portable mechanical keyboard. This likely comes from two main features: The keyboard’s Bluetooth connectivity and its small size. The K14 is more portable than a full-size keyboard, but that’s about all that can be said in terms of its travel readiness. The keyboard is still pretty thick, and the lack of any silencing means using this board in a public space will irritate anyone nearby. Keychron claims the K14 can last for up to two months on a single battery charge. During my time using the keyboard, it never ran out of power.

An included carrying case would be nice to have for a keyboard that’s meant to be portable, too. Keychron sells a hard case to carry the K14 in, but it’s almost half the price of the keyboard itself.

I could imagine taking this keyboard with me while I work, but it doesn’t feel like it’s meant for that. It’s bulky, loud, and somewhat awkward when compared to a low-profile keyboard like Keychron’s K7, and overall feels much more at home next to a desktop PC than it does in a meeting or at a coffee shop.

If I’m nitpicking, the K14 is a keyboard with many small issues: It’s a bit loud, a bit scratchy, and a bit cheap-feeling when in hand. However, all of these issues have clear ways to be fixed. It would be easy to install some silencing foam inside of the case, lube the switches, and tune the stabilizers, and all of these mods would improve the keyboard massively.

And all of this is a good thing specifically because you can do all of this. Many keyboard manufacturers make this near impossible: They create complex, awkward designs with proprietary parts that the average user can’t easily modify. There are stabilizers with unusual designs and cases that are hard to remove, and sometimes even proprietary screws holding the case together (like Logitech’s Pop Keys).

The K14 seems to invite users to take it apart, having a case that’s easy to remove, hot-swap sockets, and standard plate-mount stabilizers (which also come pre-lubed). The only real issue I encountered was the hexagonal side screws, which you’ll want to remove if you’re adding foam to the inside of the case. The keyboard can be taken apart and reassembled with minimal effort, and in my experience, there was almost no risk of parts breaking during any of this.

Keychron’s K14 is a good starting keyboard for anyone who doesn’t quite know what they want from a mechanical keyboard. Despite some minor complaints (that may not even bother you), the K14 is simple, intuitive, and has a lot of space to be fine-tuned and personalized. The quality Gateron switches and Bluetooth connectivity are all a solid value, especially in a keyboard priced under $100.

While this keyboard won’t compare to higher-end mechanical keyboards like Keychron’s own Q2 or Q1 with full metal cases and other boards with fancy mounting methods, those keyboards can’t compare in terms of pricing and accessibility.