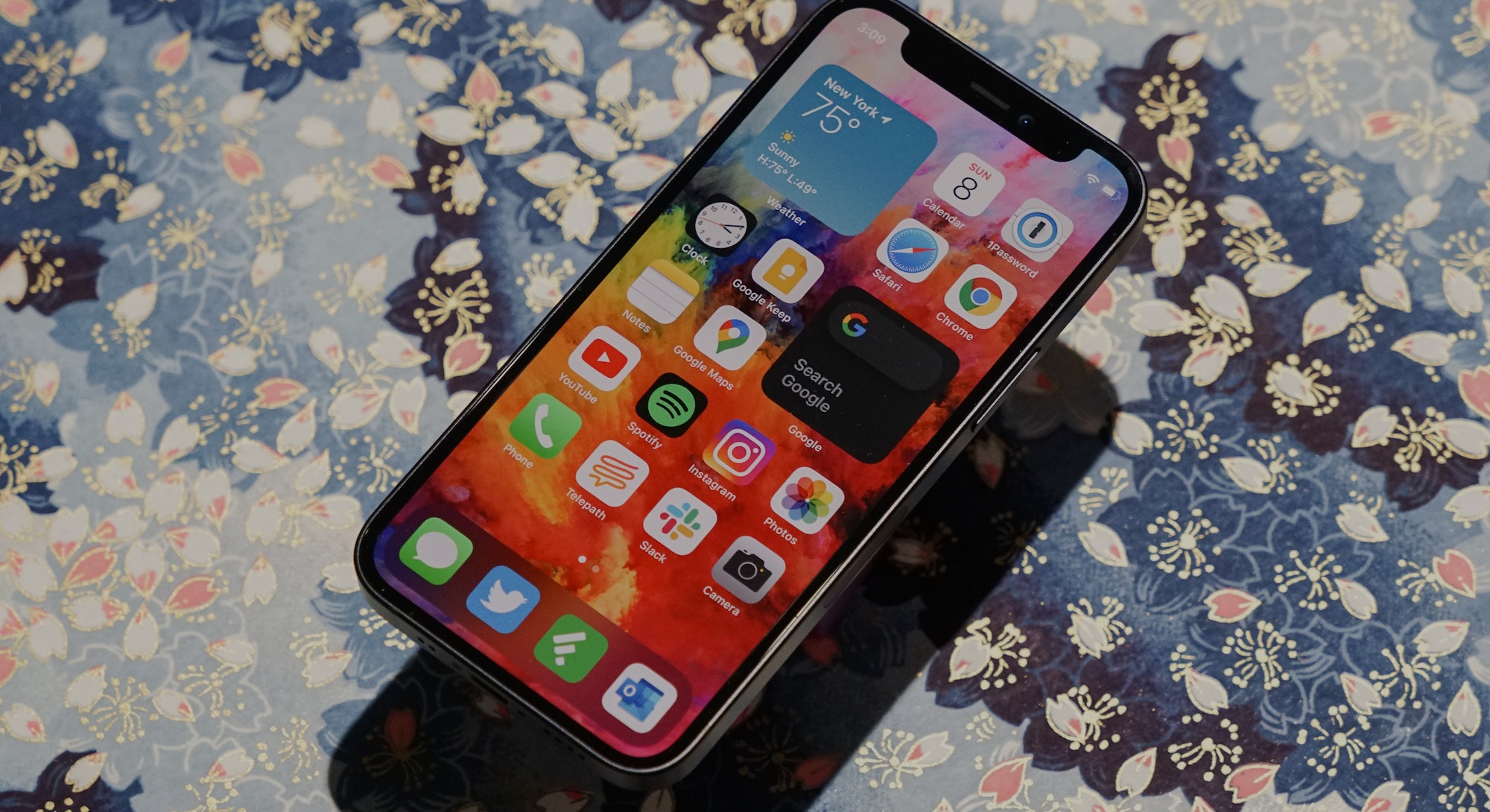 Of the four iPhone 12 smartphones Apple is releasing this fall, the iPhone 12 mini is hands down my favorite of the bunch.

I know it’s strange to call a 5.4-inch phone “mini” but it’s suitably named compared to the “plus,” “pro,” “max,” and “ultra” phones that are now the norm. Small or “mini” phones aren’t groundbreaking by any means — every once in a while an Android phone comes in a "mini" size — but the iPhone 12 mini feels like it is because there’s so little compromise to the tiny device.

This makes the iPhone 12 mini a very straightforward phone to review because it’s really just a shrunken down iPhone 12, which is one of the best smartphones to come out this year. So definitely go read my review for the iPhone 12 and 12 Pro because I’m not going to repeat everything here.

Fits in your hand

How small is the iPhone 12 mini? It’s small by today’s standard 6-inch (or larger) phones and the smallest “iPhone X-style” iPhone with an edge-to-edge display and notch.

The 5.4-inch iPhone 12 mini is just a little over a quarter inch narrower than the iPhone X/XS/11 Pro and just under half an inch shorter. It’s also smaller than the 2020 iPhone SE (and 6, 7, and 8 since they all use the same design). These dimensions and the flat sides make the iPhone 12 mini a very comfortable phone to use with one hand (remember those days?) and it feels very secure when you grip it. The iPhone 12 mini is an extremely good size that makes you wonder if we’d have gotten it sooner if iPhones never went jumbo with the Plus and Max.

There’s not much to say here except that the iPhone 12 mini’s cameras perform identically to the iPhone 12, which are the best cameras you can get in any smartphone this year.

The rear has the same 12-megapixel wide camera with the larger f/1.6 aperture for better low-light photos and a sharper 12-megapixel ultra-wide lens. Both cameras support Night mode and the pictures are fantastic. On the front is a 12-megapixel selfie camera. Again, go check out our iPhone 12 review for tons of in-depth camera comparisons with the iPhone 11 Pro, 12 Pro, and Pixel 5. Just substitute iPhone 12 mini wherever you see shots from the iPhone 12.

Because the iPhone 12 mini has the same camera system as the iPhone 12, it’s also missing some features from the 12 Pro and 12 Pro Max’s. There’s no 2x telephoto lens; there’s no LiDAR sensor for Night mode portraits and faster autofocus in low light; and the Dolby Vision HDR capture is limited to 30 fps instead of 60 fps. But these are all features I think most people can live without.

The camera system is just as flagship as its larger siblings.

Previously, if you wanted a small iPhone with the latest Apple silicon, your only option was the iPhone SE (with its single camera that’s incapable of Night mode. With the iPhone 12 mini, the camera system is just as flagship as its larger siblings.

With everything else being so similar to the iPhone 12 — performance is nearly the same in Geekbench 5 benchmarks and so are 5G speeds tested with Ookla’s Speedtest app — you’re probably wondering about battery life.

Your mileage will vary based on how long you use your phone; how bright your screen is; what kind of apps you’re using, etc. But the tough reality is that despite all of the power efficiency improvements in the A14 Bionic, a smaller battery plus 5G means fewer hours from a single charge.

For me, I get around six hours of screen-on-time with the iPhone 12. On the iPhone 12 mini, I saw that drop by an hour or two depending on what I was doing. When I was playing Genshin Impact, the hottest 3D action RPG everyone’s talking about these days, battery life took a major nose dive. Doomscrolling through TikTok and Instagram also drained the battery quickly (you probably already know that many video-heavy social media apps are battery hogs).

Many people have told me they’re disappointed with the second-gen iPhone SE’s battery life. The good news is that the iPhone 12 mini lasts longer. The bad news is that its compact size means it also runs warm when you do anything processor or graphics-intensive like playing 3D games or editing 4K video in apps like Adobe Premiere Rush.

MagSafe accessories like the Leather Wallet are compatible with the iPhone. Apple sent me two MagSafe accessories to test with the iPhone 12 mini. The first is the Leather Sleeve, a sleeve with a wrist strap made of “European leather” with a cutout for showing the time. There’s also a pocket to store a credit card, ID card, or cash. At $129, it’s pricey and I’m not convinced it’s useful enough. I already have an Apple Watch for checking the time so the cutout is redundant. The Leather Sleeve reminds me of the many cases and covers Samsung and LG have made for their Android phones over the years. The case would be a much better accessory if it showed notifications, but it doesn’t. There’s a cutout for the earpiece, which you’d think would be great for answering a call without taking your phone out, but the main cutout doesn’t even let you accept incoming calls.

The Leather Sleeve with MagSafe is a luxury item that doesn't have enough function.Raymond Wong / Input
Why is Apple making wallets? I thought Apple Pay was the future, not physical credit cards.

The second MagSafe accessory is the MagSafe Duo Charger. For $129, you get a foldable charger with one side for MagSafe charging an iPhone and the other for charging an Apple Watch. I like that the disc-shaped Apple Watch charger tilts upward so you can see the time on your nightstand and I’m glad there’s a Lightning-to-USB-C cable included. But you still need to bring your own USB-C charger. If you already have one, you’re set. But if you don’t, that’s another $19 for Apple’s 20W charger, which brings the real total to $148. It’s actually cheaper to buy a MagSafe charger ($39), an Apple Watch Magnetic charging cable ($29), and two of Apple’s 20W chargers ($38) for less — the total comes out to $106. Sure, you don’t get the 2-in-1 foldable design and you have to use two chargers and cables instead of one, but you can save $42! AirPower the MagSafe Duo Charger is not; you can technically charge AirPods on the MagSafe half, but that means taking your iPhone off it.

The MagSafe Duo Charger actually costs $149 when you add in a power adapter (not included).Raymond Wong / Input
It is a nice 2-in-1 accessory that folds in half into a compact charger, though.

Who should buy it?

There’s only one reason to get the iPhone 12 mini: it’s small. The iPhone 12 mini is the anti-phablet and you already know whether it’s right for you or not. It’s absolutely for you if you’re sick and tired of humongous phones and desire a device that’s smaller and more practical.

It’s nice that the iPhone 12 mini has 5G, the most powerful smartphone chip, and starts at $699. But let’s not pretend the size — being able to use it with one hand and fit it into tight pants pockets — is its main selling point. The fact that it has all of the cutting-edge features in the iPhone 12 only makes it more attractive. With the exception of battery life, the iPhone 12 mini has it all. And not just now, but its A14 Bionic chip ensures it’ll be able to handle software updates for years to come.

The iPhone 12 mini is the anti-phablet and you already know whether it’s right for you or not.

Going from a big phone to small phone takes some getting used to, but it's not an impossible task. Yes, the display isn't as on other phones, but I can tell you one thing: it won’t hurt as much when it falls on your face or chest while you’re laying in bed doomscrolling. Small phones are back, and hot damn, I missed them dearly!