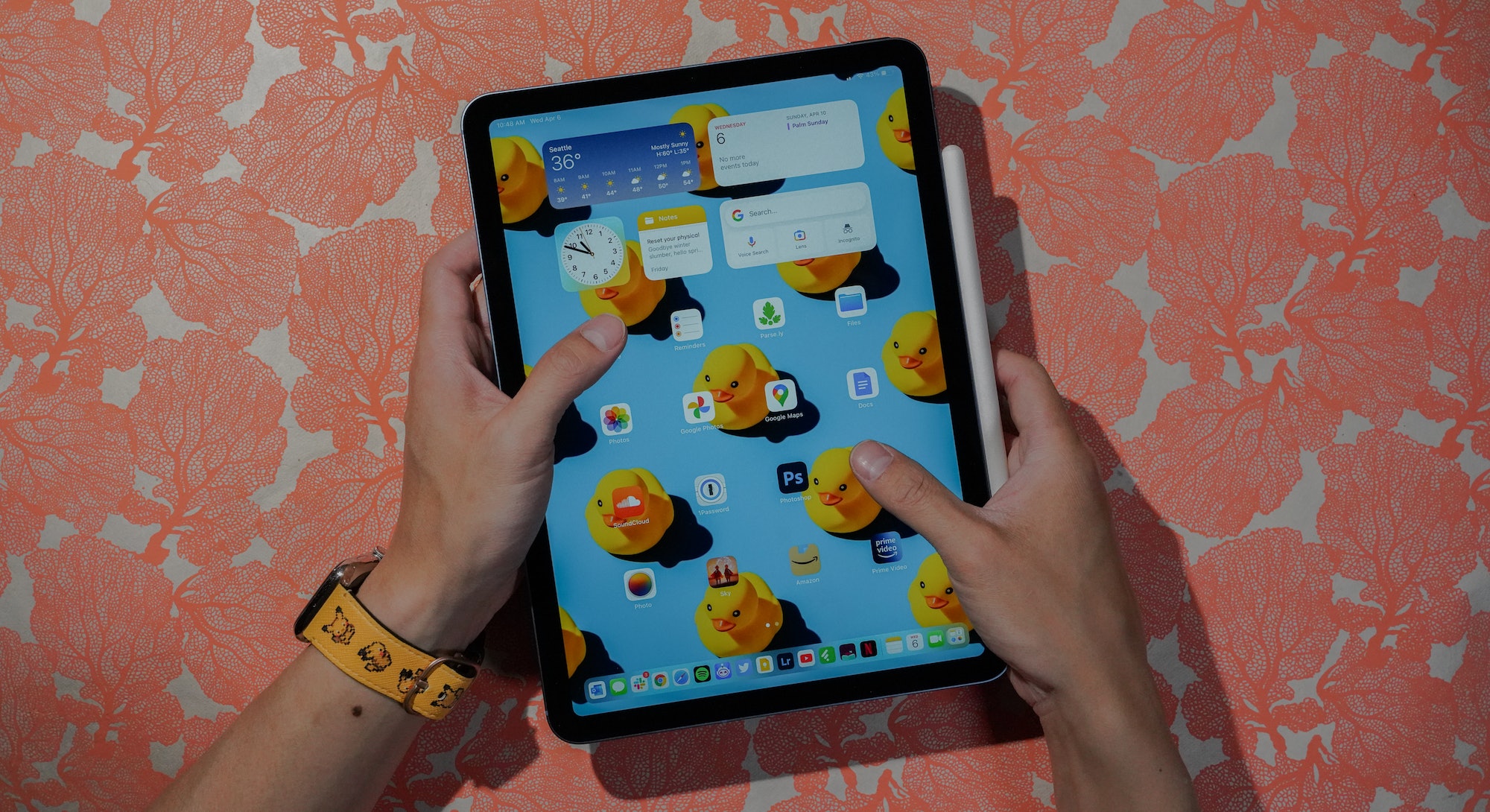 Two weeks ago, I took Apple's latest fifth-generation iPad Air 5 (or iPad Air 2022 if you prefer that) for a week-long vacation in Hawaii.

I used the iPad Air 5 for everything. I checked some email (I'm a monster for doing this on vacation), navigated Oahu for all the best food spots and hiking trails, read a few e-books, allowed myself to get back into Asphalt 9, and caught up on my queue of Netflix shows. I even sketched out a few ideas for a side project I'm working on (though my doodles still suck).

Not once did I wish I had my iPad mini 5 (smaller size) or my 12.9-inch M1 iPad Pro (mini-LED display) instead — the iPad Air 5 was the right balance of display size with its 10.9-inch display and performance from the M1 chip.

Starting at $599, the iPad Air 5 is, as my colleague Ian Carlos Campbell put it following the announcement: Apple's best iPad deal. There are only two things I want improved: double the paltry 64GB storage to 128GB and make it water/liquid/splash-resistant.

If a week of "me time" in paradise taught me anything, it's that iPad Air 5's storage is simply not enough for offline TV/movies and games. And the iPad Air 5 can't be used in a hotel tub/jacuzzi/pool or anywhere near water like a beach. The iPhone has had IP-rated water resistance since the iPhone 7 (we're now on the iPhone 13!). Why can’t I use an iPad without fear of liquid damaging it?

In my spiffy Hyatt hotel, I settled for using my iPhone 13 Pro to rewatch Terrace House: Aloha State and read Min Jin Lee's Free Food for Millionaires in my room's tub, and the on-premise jacuzzi, and pool (and Waikiki Beach where showers would start and stop without notice). What I really wanted most was to use the iPad Air 5 for its larger display and superior speakers. It's time, Apple — make iPads water-resistant.

Ask yourself if you really need the iPad Pro's extra features? If not, the iPad Air (fifth-generation) is all you need.

There are measurable differences between the iPad Air 5 and the M1 iPad Pros (11- and 12.9-inch), but I wouldn't obsess over the comparison chart. The differences are minor in my opinion and some of the features like Touch ID instead of Face ID might even be preferred.

Let's start with pricing because this is where the iPad Air 5's value shines. It starts at $599 for the Wi-Fi model versus $799 for the 11-inch M1 iPad Pro. What more do you get for $200? The M1 iPad Pro has a slightly larger screen (11 inches) compared to 10.9 inches on the iPad Air 5 and a faster 120Hz ProMotion refresh rate. Neither iPad has a mini-LED display and I didn't miss it from my 12.9-inch M1 iPad Pro at all; the black text on websites and e-books look no better with mini-LED and not having "pure" blacks for video simply doesn't bother me. (I watched Dune on my flight's garbage in-flight entertainment display with its near non-existent contrast and terrible brightness. The iPad Air 5's black levels are a million times better so unless you're a creator using an M1 iPad Pro for the best color accuracy, a few lighter shades of black isn’t a dealbreaker.)

That said, the dimensions of the two iPads are nearly identical save for a 0.2mm thicker aluminum body and five grams of extra weight on the iPad Air 5. Not that I noticed this; the iPad Air 5 works perfectly with the 11-inch Magic Keyboard.

The iPad Air 5 front camera is the same 12-megapixel resolution as on the M1 iPad Pro. Lacking the TrueDepth camera sensor package, the iPad Air 5 doesn't support Face ID or Animoji/Memoji FaceTimes. It does support Center Stage, a feature I initially didn’t care for but came to appreciate whenever I had the iPad in landscape orientation; Center Stage zooms in on your face so that the camera doesn’t look like it’s aimed at your cheek. On the rear of the iPad Air 5, there's only one 12-megapixel wide camera as opposed to the M1 iPad Pro's 12-megapixel wide, 10-megapixel ultrawide, and LiDAR sensor. On an iPad, a single rear camera is sufficient — serviceable for photos and scanning documents, but nowhere near as impressive as the cameras on an iPhone.

Other differences between the iPad Air 5 and M1 iPad Pro include two speakers versus four, mid-band (sub-6 GHz) 5G versus mid-band and mmWave, a regular USB-C port instead of a USB-C port that supports Thunderbolt/USB 4 speeds, and multiple anodized aluminum colors (five versus two). And, of course, the iPad Air 5 comes with only two storage capacities (64GB and 256GB) compared to the M1 iPad Pro's storage which starts at 128GB and goes up to 2TB.

It reads like the iPad Air 5 is missing a lot of features found on the M1 iPad Pro. As an iPad fanatic (yes, I know iPadOS is still largely limiting, but a Magic Keyboard and Universal Control have made it more usable as a "real" computer), I can tell you the iPad Air 5 still smokes any similarly priced Android tablet or even some that cost more. The 64GB of storage is really the only major downside.

Almost everything that makes the iPad Air 5 such an excellent tablet can be attributed to the similarities it shares with the M1 iPad Pro: M1 chip performance, 10 hours of battery life, and Apple Pencil 2 and Magic Keyboard support. These iPad tentpoles are not compromised on the iPad Air 5.

Everything I normally do on my 12.9-inch M1 iPad Pro, the iPad Air 5 handled just as well. There's no drop in performance playing 3D games like Genshin Impact or Pokémon Unite on an iPad Air 5 compared to an M1 iPad Pro. Upscaling an image with the "Super Resolution" feature in Pixelmator Pro took the exact same amount of time to process. The responsiveness of the Apple Pencil from its tip to the screen didn't feel perceptively slower; any reduction in latency from the M1 iPad Pro's higher 120Hz refresh rate is lost on stick-figure artists like me. That Apple could put an M1 chip into the iPad Air 5 and there's no dip in performance showcases not only what a triumph its custom silicon is in performance and efficiency, but its scalability across the 13-inch MacBook Air/MacBook Pro, 24-inch M1 iMac/Mac Mini, and iPads.

For better or worse, the story of iPadOS has not changed. There’s a wealth of really good iPad apps for everything from drawing, writing, streaming, to games; way more than for Android tablets. Widgets on the home screen and the App Library are great. But, why does Apple still not have its own weather app like on iPhone? The weather widget kicks you over to the ad-infested Weather.com website. I’m not asking for macOS on an iPad like everyone is — just know what you can and can’t do with iPadOS. Get a laptop if you want a laptop; Apple sells a whole family of MacBooks with good keyboards and M1 performance now.

Even if Apple had used an A15 Bionic — the same chip in the iPad mini 6, iPhone 13/13 Pro, and iPhone SE 2022 — the iPad Air 5 would still be far ahead of any Snapdragon-powered Android tablet.

And the battery life: It's just as good as ever. Since the original iPad, Apple has maintained 10 hours of battery life for its tablets. While I think it's time Apple pushed the hours from a single charge upward, 10 hours of battery is still nothing to sneeze at. I used the iPad Air 5 during almost the entirety of my 11.5-hour flight to watch downloaded Netflix episodes and TV, read e-books, play games, and there was still around 15 percent leftover by the time I landed. And that’s all while listening to downloaded music from Spotify using AirPods Pro. As with my M1 iPad Pro, I did notice that using the Magic Keyboard with the iPad Air 5 drained the battery faster. Your mileage will vary, but 10 hours of typical iPad workload is right on the money.

All iPads are great

Does Apple sell a bad iPad? Not as far as I can tell. Even the entry-level iPad 9, with its old design that dates back to the original iPad Air and Touch ID home button and Apple Pencil 1 support, is a damn good deal for $329. I'm always reminding people that the basic iPad’s 10.2-inch display is larger and sharper, and the price is $70 less than the first few years of iPads which started at $499. iPads back then didn't even support Apple Pencil!

The iPad Air 5 continues Apple's tradition of iPad excellence and dominance by bringing key technologies like the groundbreaking M1 chip down to a more affordable price. As much as I lean towards the premium end of the gadget spectrum with the best features packed inside, I was more than satisfied with using the iPad Air 5 and its features during my Hawaii trip. I found it lacking in only two areas (storage and lack of water resistance); everything else is as good as it gets for the price.

The iPad Air 5 is a terrific deal any way you look at it.

Unless you absolutely must have all of the bells and whistles of the M1 iPad Pros, the iPad Air 5 is more than capable. I don’t mean that in the sense that it’s a little better than the competition; the iPad Air has a very long life ahead of it. The M1 chip alone means the iPad Air 5 has tons of headroom for years of iPadOS updates to come — something Apple is very good at. Just look at how the iPhone 6S runs iOS 15 or the iPad or the iPad Air 2, released in 2014, supports the latest iPadOS 15.4.

The iPad Air 5 is not a difficult iPad to understand: It's an 11-inch M1 iPad Pro stripped of all non-essentials. Don't let that fool you into thinking it's a vastly inferior iPad. It's not. The M1 chip is just as much of a beast in the iPad Air 5 as it is in the M1 iPad Pro. Use the $200 saved to get yourself an Apple Pencil 2 and you still have money left over for a case (or apps). Or knock $200 off the $299 Magic Keyboard. The iPad Air 5 is a terrific deal any way you look at it.