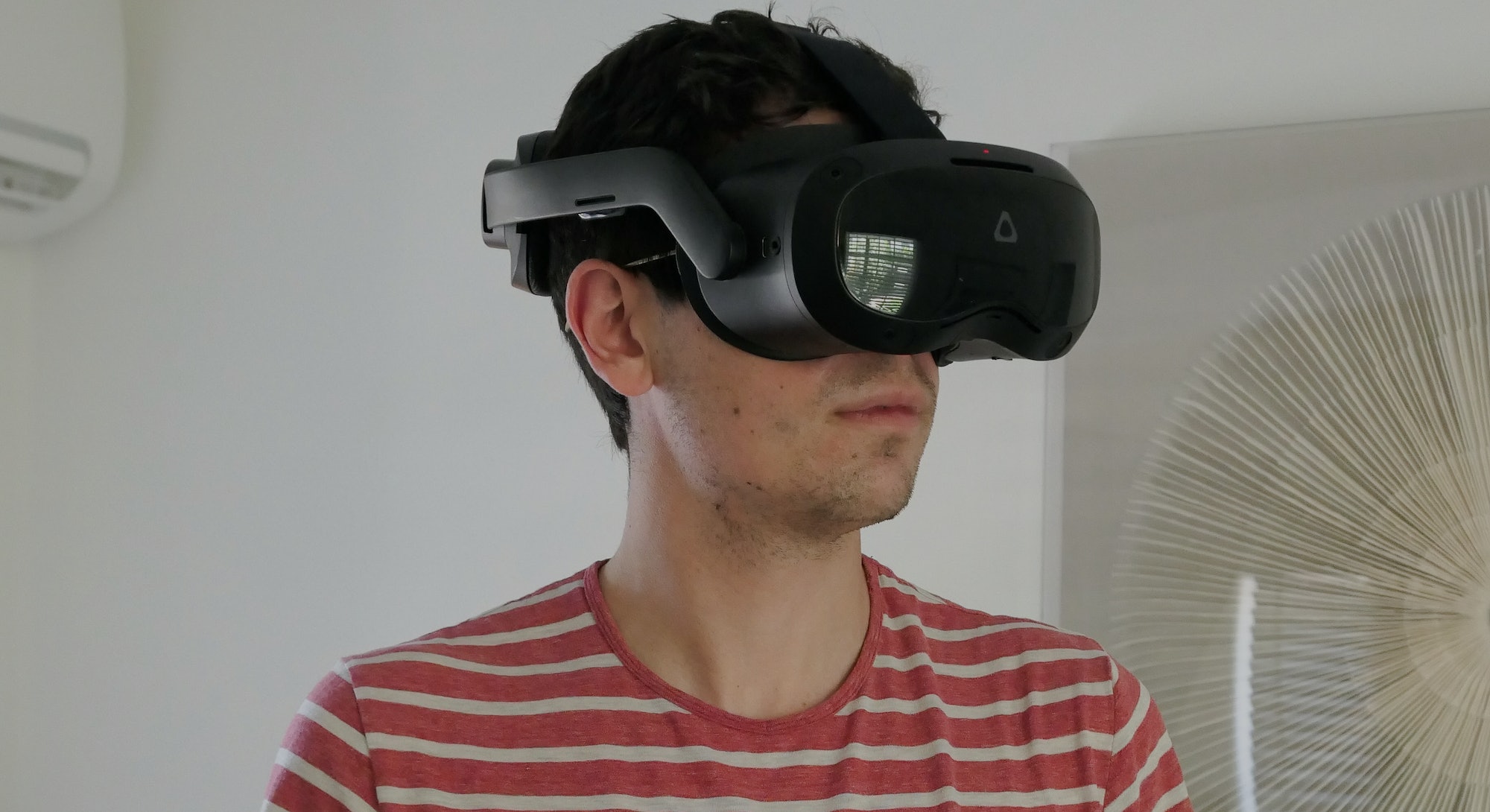 I just want a VR headset that doesn’t hurt to use.

It’s not that virtual reality headsets haven’t come a long way. Take one look at concept images and real-life products from the '80s and '90s and it's easy to see that we have it pretty good in 2022. But I’m tired of the red marks on my face and the eye strain. The way little dewdrops of sweat collect on the corners of the rubber gasket that covers the faceplate of the Quest 2. The way my hair gets messed up by velcro and the surprisingly vice-like grip of the Quest’s “Elite Strap.”

In all the compromises that come with VR — and I imagine whatever metaverse-flavored products get forced on us in the next few years — the physical ones are frequently the most confounding, in terms of both accessibility and design. The Quest 2 is an amazing feat of engineering, but a vehicle for long-term VR use it is not. There are a ton of factors to this problem, the price of parts, the kind of experiences that you do in your headset, and more.

HTC’s Vive Focus 3 attempts to address them by having the nicest fit and finish of any VR headset I’ve used, but at a hefty $1,300 cost. It’s an enterprise-only product, so not useful for everyone, but I think it has design elements that should absolutely trickle down into more affordable headsets.

The Focus 3 is an enterprise-focused all-in-one VR headset with 5K screens and a premium fit and finish.

Premium with a capital P

I have no love for glossy plastic, but don’t let first impressions sway you on the Focus 3. Despite HTC’s specific VR aesthetic, which is definitely its own brand of future dystopia (in a good way, it’s distinct), the Focus 3 feels decidedly premium.

The Focus 3 is bigger than the Quest 2 and noticeably heavier, yet overall I think it’s more comfortable to wear for extended periods of time. In comparison to the design language of the Quest 2, the Focus 3 is for people who know they’re working in VR and want other people to know it too — I’ve heard it compared to the VR headsets from Ready Player One and I don’t think that’s far off. The headset differentiates itself — and I think partially justifies its higher price — with improved ergonomics. Where Meta sells the Elite Strap for the Quest 2 as a $50 add-on, the Focus 3 comes with the same curved battery and improved weight distribution built-in. HTC has also gone a step further and made the battery of the Focus 3 hot-swappable.

All of the most important surfaces of the Focus 3 are smooth and comfortable to the touch. The best is the faceplate, which is coated in cushiony, almost faux-leather padding like you’d find on a pair of Sony WH-1000XM4s. It’s removable and features rubber flaps where your nose goes. The back of the Focus 3 can be loosened or tightened using a built-in wheel and it has a quick-release button for easily getting the headset on and off. These are the kind of quality of life features that $1,300 buys you (even though I think they should cost you less).

The twin screens behind the Focus 3’s comfortable cushioning are 5K LCD panels with 2,448 x 2,488 pixels per eye (4,896 x 2,448 pixels combined), a 120-degree field of view, and a 90Hz refresh rate. They’re brighter and crisper than the Quest 2’s 1,832 x 1,920 resolution displays, and the most noticeable difference between the two headsets other than how they feel to wear.

Unlike some of HTC’s other headsets, the Focus 3 uses downward-firing speakers rather than over-the-ear headphones. They get fairly loud but are more noticeable in a quiet room than the Quest 2’s, possibly to account for the Focus 3’s internal fan. I think how VR audio gets delivered to you is mostly a matter of taste as long as it sounds good, but I definitely prefer a built-in pair of headphones (or a headphone jack, which the Focus 3 includes) to speakers that are just going to blare audio to the rest of the room. It’s bad enough I’m flailing around in the corner, my friends don’t need to hear what I’m flailing to as well.

The Focus 3’s controllers use a familiar layout to other VR headsets with inside-out tracking. There are three buttons on the face of the controller, a joystick, the familar loop for tracking your fingers, a side button on the handle, and a clicky trigger on the front. It’s a larger controller than the Quest 2’s Touch controllers, with a longer handle, which I think makes it much more comfortable. There’s a certain solidness that the Touch controllers have that the Focus 3 controllers lack, but otherwise, HTC is right on the money. The Focus 3’s controllers also charge over USB-C, which depending on your personal preference might be a quirk you have to work around.

No great VR operating system (yet)

As an enterprise product, the Focus 3 is dramatically limited in what kinds of experiences you can have with it. Rather than using HTC’s Viveport storefront, the Focus 3 uses the Vive Business Appstore, which as its name suggests, is mostly focused on productivity apps, meeting software, and hyper-specific job training experiences.

There are a few games and entertainment apps (I walked through a park with a fox, I shot some arrows at other people in an arena), but don’t spend $1,300 and think you’re going to be playing anything you want to play without connecting it to a gaming PC and pulling games from normal VR storefronts. Sideloading services like SideQuest reportedly also support the Focus 3, but they still require developers to port their games to the headset to work. It’s not that the Focus 3 isn’t capable — it’s using the same Snapdragon XR2 processor as the Quest 2 — it’s just got very few things to test its capabilities on.

It’s a real shame because HTC’s Viveport has a pretty robust selection of apps and games already, and a fairly unique payment scheme. While HTC does sell some VR experiences as single purchases, the company also offers the Viveport Infinity subscription for $13/month that gets you unlimited access to a wide selection of games and apps in its store. HTC offers a separate Viveport Vista subscription for all-in-one devices but it still seems to be missing some of the bigger titles and exclusives you might find in other stores.

You need more than flat text on blue-gray windows to convince me to stay in a virtual space.

The Focus 3 operating system is also surprisingly barebones. You can get everything you need to get done with this version of the “Vive Reality System,” it’s just a lot more rickety than I’d expect from a thousand-dollar headset. Part of this is might be because HTC knows most of the people interacting with the menus of the headset are the IT workers setting them up for their corporate colleagues, but it doesn’t feel as premium as it costs. You need more than flat text on blue-gray windows to convince me to stay in a virtual space.

This is really the only reason I’m interested at all in Apple trying to muscle into the virtual and augmented reality space. It might have some new software ideas that can shake things up and save us from the polished but ad-heavy Meta take or the stripped-down, visually unappealing HTC version of a virtual reality operating system.

Nothing about using a computer is natural. Writing for Motherboard, researcher and NYU professor Laine Nooney describes how a more accurate history of computing might focus on the bodies that used computing machines as much as the machines themselves. “The introduction of computers into everyday routines, both at work and at home, was a historic site of vast cultural anxiety around the body,” Nooney writes. If virtual reality ever becomes as popular and commonplace as some companies want it to be, as normal as a personal computer, I think the same could be said for it.

Standing and using a VR headset and controllers might alleviate some of the spine-crushing qualities of desktop computer work, but it also introduces whole new problems related to physical space and accessibility. If you can’t easily stand for long periods of time or have reduced mobility in your arms, how exactly are you supposed to do most things in VR? If you don’t have room for VR, what kind of experiences are you cut off from?

As much as I think the Focus 3 improves on the standalone VR headset to the point of being the favorite one I’ve worn, it still has the basic problem of putting a very bright screen far too close to my eyes. I haven’t experienced too much eye strain from a VR headset, but I’ve also deliberately tried to spend only an hour inside at a time. I can’t imagine it feels good using a headset as bright as the Focus 3 for a full day of work. Yet that’s something vaporware concepts like the “metaverse” would like to leave open as a possibility. If it wasn’t clear already, working in VR complicates things, just as much as it streamlines them. Not unlike a normal computer.

The Vive Focus 3 makes some important changes that lessen some of the more glaring tradeoffs of other standalone VR headsets, but it comes with major ones of its own. I can’t recommend the Vive Focus 3 to regular consumers — HTC also makes it very clear the headset is for business applications — because of its exorbitant price and its limited app store. But I can hope and pray other companies copy HTC’s notes, and make a headset as nice to wear as this one that is for consumers. Hell, HTC should make a consumer version of the Vive Focus 3 — the hardware is already good to go.

HTC should make a consumer version of the Vive Focus 3.

Yes, I know that making a consumer headset is hard, especially bringing down the cost to a few hundred dollars as Meta has with the Quest 2. It's this very reason why HTC and many companies like Magic Leap, Microsoft, and even Google (Glass is still kicking around) hard pivoted to enterprise applications. The Vive Focus 3 makes for a terrific blueprint for this next phase of VR. I think there’s room for HTC to offer an all-in-one headset that offers more than the Vive Flow, but costs less than the $699 Vive Cosmos. Meta needs the competition, and we'd all be better for it.