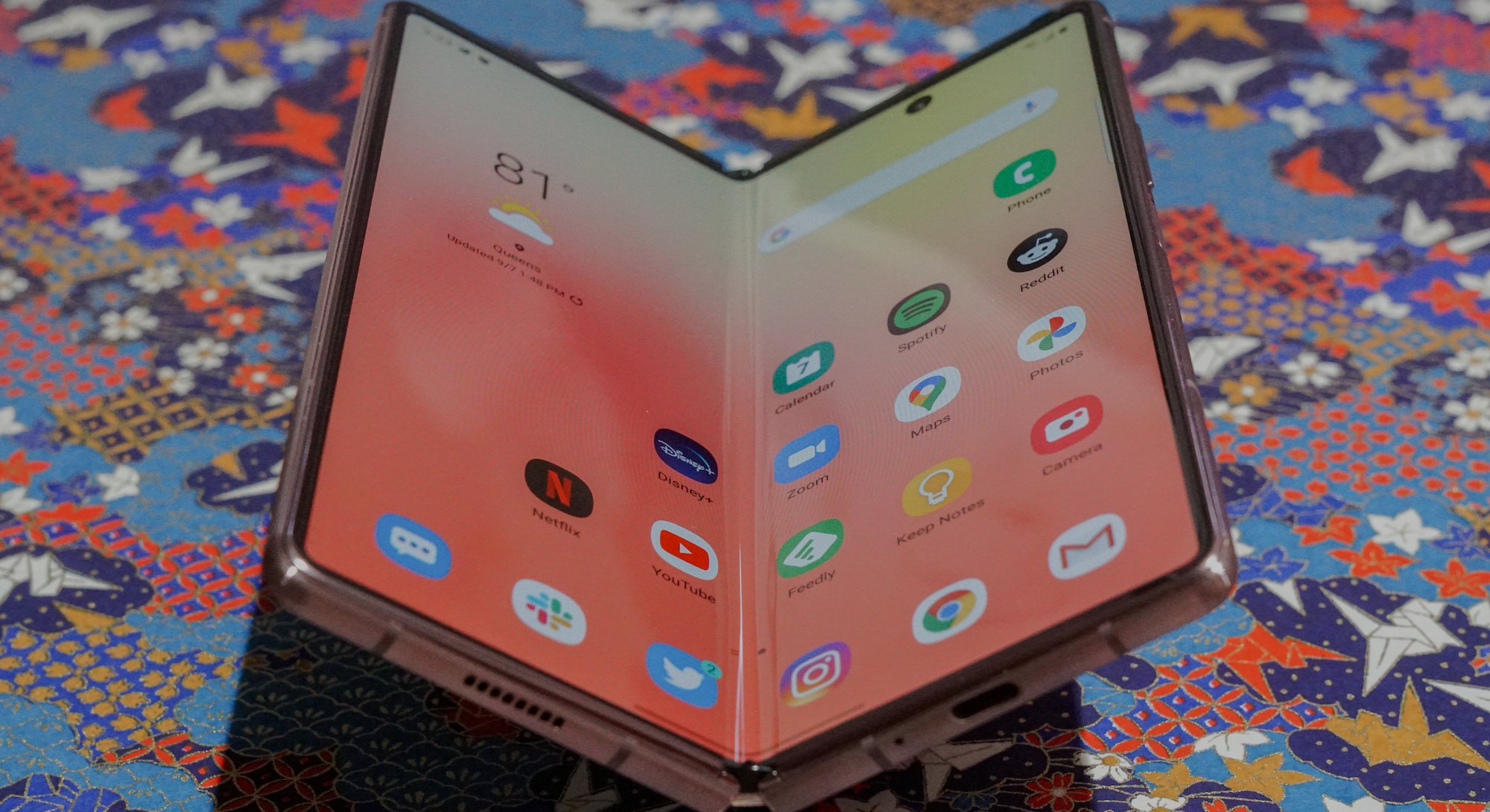 Buying a Samsung Galaxy Z Fold 2 comes down to answering a single question: Do you have $2,000 to spend on a phone? In 2020, the year of the apocalypse?

“No way" is going to be the answer for most people. Samsung has no pretenses with the Fold 2: it’s a phone for the rich, fancy, elite — whatever you want to call them (or yourself). The included perks, like membership to FoundersCard and complementary Michelin-rated meals, are dead giveaways to who this device is for. A broke college student isn't buying a Fold 2 (not without starving for a few months).

But if your middle name happens to be Moneybags, the Fold 2 is a blast of freshness in the stale phone world, even despite it still having some glaring drawbacks. In one year, Samsung has flipped the script on the Fold. Nearly everything that made the original Fold impossible to recommend, even for those who could afford it, has improved. Key among these changes is the noticeably larger cover display, the more durable foldable screen made of ultra-thin glass instead of plastic, and smarter software that adapts to the folding design.

As one of the harshest critics on foldables (fairly so, in my opinion), I found myself secretly loving the Fold 2 over the last week. Much of this has to do with my new work-at-home lifestyle because of COVID-19. But also all of the Fold 2's upgrades — big and small — have vastly improved usability. The Fold 2 is not just a phone — I think it's the turning point for foldables altogether.

I ripped into the original Fold for being too big and too heavy. The Fold is still a big chonky phone. In fact, it’s actually ever so slightly thicker, wider, and heavier. But just barely. You won’t notice it if you own a first-gen Fold. Everyone else definitely will feel the extra heft. If you prefer your phones dainty, you should probably stop looking at foldables right now.

The bulkiness drove me crazy last year, but I’ve come to terms with it for a few reasons. First, I no longer commute to work, which means pocketability isn’t a major concern for me anymore. The Fold 2’s size and weight don’t affect mobility when it’s mostly transported between rooms.

Second, when I do go outside these days, the Fold 2 goes right into my small shoulder bag along with other pandemic essentials such as hand sanitizer, a spare face mask, a pack of tissues, and disposable gloves. Pre-COVID-19, my phone went in my pants pocket. Nowadays, a big phone is not as big of a deal because leaving without a personal bag is not an option. Men: If you’re still looking at personal bags with scorn, you need to get over your boomer mindset. Shoulder bags are cool and useful.

If you’re not like me, the Fold 2 may be a literal bad fit, especially if you wear skinny pants. Even in my slim jeans, the Fold 2’s long folded dimensions make it look like I’m happy to see you. Just sayin’.

The original Fold was flawed in a handful of major ways. I’ve heard some people float a conspiracy theory that Samsung intentionally made the Fold mediocre to set itself up to blow minds with the Fold 2. Yeah, I'm not buying this crazy idea.

Whatever, because the Fold 2 fixes the first foldable’s shortcomings. Immediately noticeable is the larger 6.2-inch cover display, which dwarfs the original Fold’s tiny 4.6-inch screen. It’s a tall and skinny display (25:9 vs. 21:9), but at least it’s usable now.

The inside foldable screen measures 7.6 inches (0.3 inches larger) and has more pixels. It’s still got an ugly crease, but I’ve come to terms with it. The crease is an imperfection that I don’t think will be resolved. Even a folded piece of paper has a crease.

The most important upgrades, however, are the ones you can’t see at first: 120Hz refresh rate, ultra-thin glass instead of plastic, and redesigned hinge mechanism. The doubled refresh rate makes Android’s scrolling and animations silky smooth and responsive — a must when you’re running two or three apps simultaneously.

The ultra-thin glass is Samsung’s answer to the easily scratchable plastic foldable display on the first Fold. This bendable ultra-thin glass is supposed to be as durable as the one on the Galaxy Z Flip, which is to say it’s stronger than a plastic folding screen but still fragile. Foldable screens are not yet as scratch-resistant as the latest Gorilla Glass in flagship phones.

Samsung uses every opportunity to remind buyers this: there’s a warning label attached to the Fold 2 (also a digital version during setup) and the device comes with pre-installed screen protectors. The screen protector on the cover screen is your standard plastic cover. The one on the foldable display is a little different; it's made of a softer material.

Samsung advises users have a certified company specialist remove it at a retail store to prevent accidental damage. The pre-installed screen protector is a nice freebie especially if you're going to apply one on anyway, but it feels like a lack of confidence to me. I can see why, too: Within minutes of swiping and tapping on the shielded foldable display after unboxing, the screen protector showed light nicks and indents. How? I’m not sure since my nails were trimmed. I guess it’s better to damage the screen protector first — and then just rip it off — than the actual display.

Samsung also says it redesigned the hinge mechanism to beat back more dust and debris; it also strengthened the backside of the display panel. I can't realistically test that in two weeks. You can see a video here of the hinge’s new brushes used to keep gunk out. Although I'm not allowed to artificially stress test my 14-day loaner Fold 2, I've yet to see any problems in daily use. Some light pocket lint does get between the folded screen, but not enough to break the device this time.

Beyond the hardware, Samsung made additions to the software to better take advantage of the two screens. App Continuity, a feature that lets you open an app on the cover screen and resume in an expanded view when you open up the Fold 2, feels more instant now. I don’t know if that’s because of the Snapdragon 865 chip, faster UFS 3.1 storage, or better optimization of its 12GB of RAM, but I’m all for it.

The Fold 2's massive screen sets your content free and liberates your eyeballs.

Getting a bigger screen to read and play games (the Fold makes a great retro handheld with a gamepad) is a joy no other phone can provide. Everything — crease be damned — is better with a larger display. Reading, watching videos, games, video calling — it's all more immersive. Even though 6-inch phones are now the norm, they still feel restrained by their 16:9 aspect ratios. The Fold 2's massive screen sets your content free and liberates your eyeballs.

That said, there’s still a lot more that needs to be done software-wise. Samsung’s brought over Flex Mode from the Z Flip, which allows certain apps to split into two sections at the crease. For example, if you fullscreen a YouTube video and then bend it into clamshell/mini-laptop mode, the video displays on the top and comments on the bottom. I found Flex Mode useful for making Google Duo video calls.

The biggest challenge for Samsung will be getting developers to optimize their apps for Flex Mode. It’s a tough ask when the number of Fold users is so low. Not to mention, it’s a Samsung optimization, not a guideline that Google recommends when developing Android for foldables. The other challenge Samsung will have is convincing developers to tweak their apps for two and three window split-screen mode.

Samsung says Google and Microsoft have optimized their apps to work better in these modes (i.e. Outlook can show your inbox on one half the screen and individual messages on the other half), but the number of third-party apps is still scarce.

If you compare the Fold 2 with the Surface Duo (a different, but still similar foldable) you’ll see the differences in restraint. Whereas Microsoft went with one camera to achieve thinness and lightness, Samsung put five cameras on the Fold 2: a 10-megapixel hole punch camera on the cover and foldable display, and a triple-lens camera on the rear (12-megapixel main, 12-megapixel ultra-wide, and 12-megapixel 2x telephoto).

I’m conflicted by Samsung’s decision. On the one hand, there’s a camera to cover all of the Fold 2’s usage scenarios. But on the other hand, is this overkill? Does a phone, whose main selling point is its foldable display, really need so many cameras? Then, there’s this argument: At $2,000, it’d be criminal not to include so many cameras. I think I’d be happy with just a main camera and an ultra-wide camera if it means a more affordable Fold with a much thinner and lighter design.

Rational or not, the Fold 2’s cameras are good, so you needn’t worry about sub-par photos.

The Fold 2 may not have the same 108-megapixel image sensor as the Note 20 Ultra and S20 Ultra, but the 12-megapixel photos it takes are fine. Night mode is solid, too; I'm not too nitpicky on brightness since that's different for every night mode and can be boosted in post.

Selfies look good — no major complaints. The below Fold 2 selfie was taken with the 10-megapixel camera on the cover display. If you want better (or wider) selfies from the triple-lens camera, there's a mode that lets you use it, but it's kind of awkward and I wouldn't recommend it unless you absolutely have to.

Samsung needs foldable phones to work or it may find itself permanently unseated from being the No. 1 shipper of phones every year. Unlike Apple, which is in the enviable position of having serious ecosystem lock-in with features like iMessage and AirDrop, and halo hardware such as the Apple Watch and AirPods, Samsung is just one of many companies that make Android phones.

The competition is so unbelievably fierce that Samsung was forced to compete more aggressively with mid-range phones. Tactics, like cramming each new Galaxy S and Galaxy Note with more features, no longer work. Not when other Android phones have the same (or more) features for less.

For Samsung, the Fold series can’t just be a luxury product for the ultra-rich. The Fold 2’s success or failure is very much a reflection of the company’s ability to innovate. I look at the improvements Samsung made to the Fold in a single generation and see that the company understands that failure is not an option.

Samsung understands that failure is not an option.

The Fold 2 is a giant leap forward for the phone-tablet hybrid form factor. It’s immensely fun to have a huge screen for reading, watching videos, and playing games without having to switch devices. I loved being able to edit stories on the go with the bigger screen. But it’s also $2,000. For that much money, I think there’s still more Samsung could offer. Like I said in my Note 20 Ultra review: give the Fold an S Pen. Really put the Fold on a diet. Bring back the 512GB storage (256GB is unacceptable for a $2,000 device). Expand the Flex mode capabilities. Free idea: Flex mode for propping up selfies and an S Pen to use as remote for clicking photos; it beats this.

But also, if you’re rich, you have my blessing to go ahead and buy the Fold 2. I can't speak for its long-term durability, but I can say Samsung's finally made a worthy foldable that challenges everything we know about mobility.