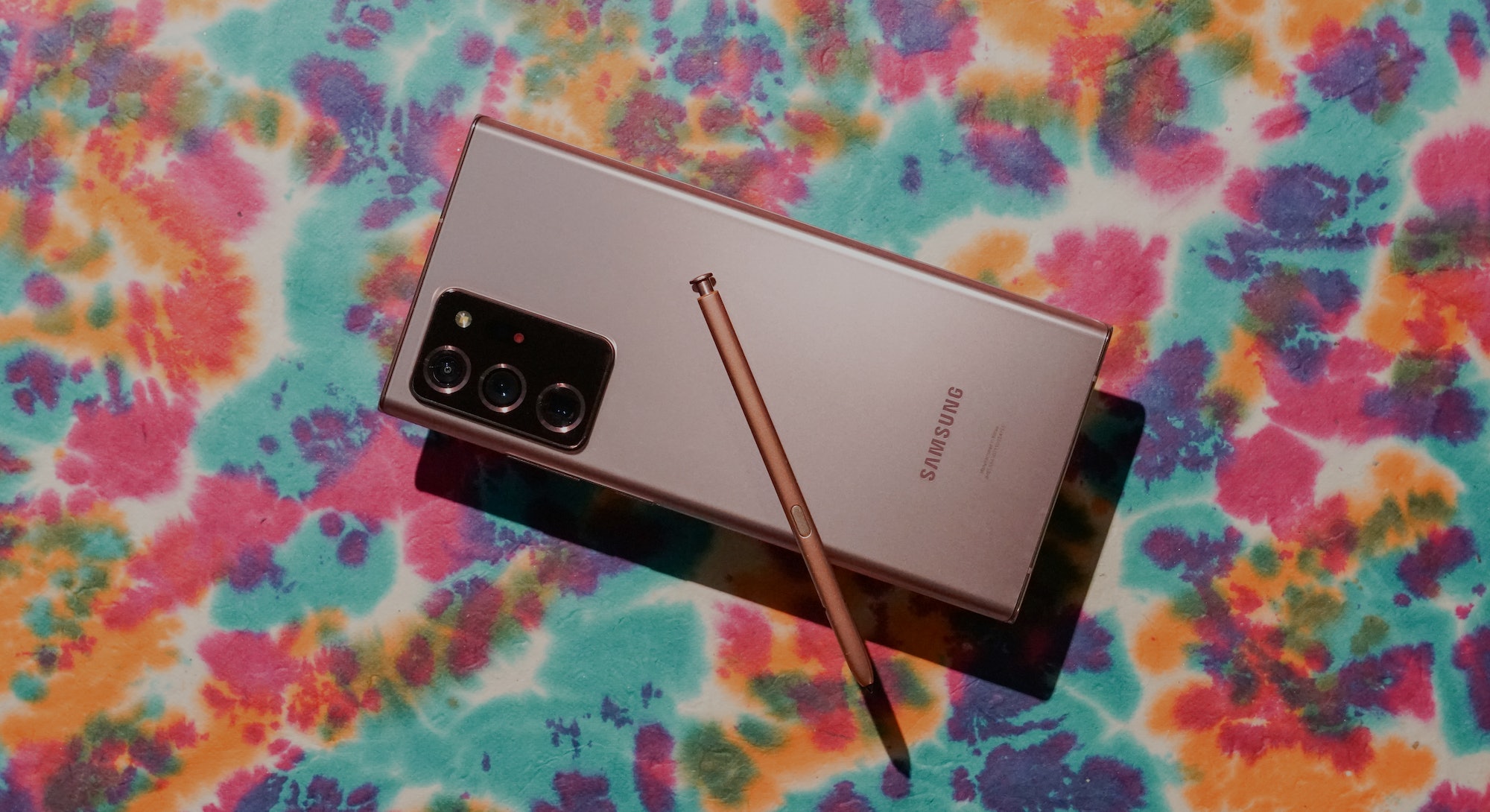 Everyone said "phablets" were stupid. That they would be remembered as a fad. Everyone was wrong.

Samsung's Galaxy Note 20 Ultra is the ninth version of the original Really Big Phone. (Fun fact: there never was a Note 6! And RIP to the Note 7.) And true to its ancestor, the Note 20 Ultra is again a super-sized phone stuffed to the gills with flagship specs, features, and an S Pen on top.

Once upon a time, I would have been offended by the Note 20 Ultra's proportions. But complaining about a big phone is so out-of-touch in 2020 that you really should roll your eyes at any reviewer who does it. I prefer a smaller phone, but the reality is that people love big phones with big screens, big batteries to last several days, and big bumps to fit better camera systems with more lenses. (Okay, maybe people don't love the tumor-sized bumps on phones, but they do love being able to take really good photos and videos.)

The Note 20 Ultra is without question Samsung's best phone in years. If you want Samsung’s very best, this phone is it. Samsung checked off all of the boxes. The most important box being the 108-megapixel main camera sensor — the same one that was sluggish on the S20 Ultra — autofocuses quickly with the laser autofocus sensor. I’m very happy with the speedy camera performance.

But the bigger question that has lingered in my mind as I tested the Note 20 Ultra is: what is a Galaxy Note on its ninth iteration? Does including an S Pen bring enough to the table? Maybe a few years ago, but the new S Pen features on the Note 20 Ultra are so modest I really think it’s time to reboot the series (a theme for many phones it seems) so it can step out of the Galaxy S series’ shadow.

Not all big phones are created equal. But Samsung still knows how to make a big phone attractive. The Note 20 Ultra is classy in a way the S20 Ultra isn’t. Though, they’re roughly the same size with equally massive rectangular camera bumps on the rear, the Note 20 Ultra has a fit and finish that’s evidently more handsome.

The flat top and bottom complements the huge 6.9-inch 120Hz screen (3,088 x 1,440 resolution) and matches the smaller curvature of its corners as they slope down both sides. Samsung showed signs of walking back on curved screens with the S20 Ultra, but I think when the glass is judiciously curved like it is on the Note 20 Ultra and doesn’t affect usability then it’s still hot.

And what a screen the Note 20 Ultra has! It’s so big, so sharp, and so bright (peaks at 1,500 nits). At this point, is there even any doubt Samsung really knows how to make terrific phone displays?

The Mystic Bronze color is particularly stunning. The matte satin-finish glass is a combination of non-slip grip and fingerprint-repeller. I love how it feels compared to a glossy back. The S20 Ultra’s fingerprint-attracting glossy back is disgusting in comparison. Samsung even reworked the camera bump; three handsome rings encircle the three camera lenses to draw attention to their hidden imaging prowess. It’s a bold design statement and I’m loving it.

The only stain on the Note 20 Ultra’s beautiful chassis is the “Manufactured in Korea” and IMEI number printed below the Samsung logo. Your hand or a case will cover it, but do we really need the IMEI stamped on the outside? Bury all of that stuff in the Settings app! (Yes, I’m aware the S20 Ultra has the same. But the iPhone doesn’t!)

Jumping from the S10 / Note 10’s 12-megapixel image sensor to the whopping 108-megapixel sensor inside of the S20 Ultra camera came at a cost: sluggish and unreliable autofocus.

In our comprehensive testing, we found many out-of-focus photos on the S20 Ultra because the autofocus simply missed. Though Samsung has never officially stated why the autofocus was so bad, we’re pretty sure it was because the 108-megapixel sensor uses PDAF (phase detection autofocus) which only covers some of the pixels on the sensors instead of DPAF (dual-pixel autofocus), which covers every pixel on the sensor.

Though Samsung did release a software update, it didn’t really “fix” the hit-or-miss autofocus. The hardware is the problem, not the software. My review unit never got the update, but such is often the case with Android phones that get updates through carriers instead of directly from device makers.

I’m happy to report Samsung has corrected the S20 Ultra’s bad autofocus on the Note 20 Ultra. The main camera still uses the same monstrous 108-megapixel sensor, but there’s now a laser autofocus sensor (the black pill with the red dot below the LED flash) to assist with autofocus. And it really helps.

Autofocus speed is dramatically faster on the Note 20 Ultra than the S20 Ultra.

Autofocus speed is dramatically faster on the Note 20 Ultra and I had way fewer out-of-focus photos than with the S20 Ultra. You can verify this improvement with a simple test: cover the laser autofocus with a finger or a piece of opaque tape and you see the camera itself takes a second slower to lock focus just like on the S20 Ultra. Remove your finger or the tape and the focus detects instantly.

Frankly, this fix alone was the only thing I needed to see in the Note 20 Ultra. But there is one downside as pointed out by my colleague Evan Rodgers. Since the camera’s autofocus is dependent on the laser sensor, if you cover it up or it’s damaged, there goes your speedy autofocus. This is going to be a problem when lens attachments like Moment lenses come out; previously, attaching a lens would only block the other built-in lenses (ultra-wide and tele), but now they’re going to block the laser sensor, too.

It sounds like a downgrade, right? Nope. The 100x Space Zoom was such a gimmick — it’s virtually impossible to hold the S20 Ultra still enough to shoot a photo at 100x zoom — that I’m relieved the Note 20 Ultra has a more functional 50x Space Zoom. Photos taken at 50x are still blurrier and you also still need to use a crosshair to help target a subject, but it’s at least useable handheld.

Low-light performance on the Note 20 Ultra is virtually indistinguishable from the S20 Ultra, too. Below, I’ve included default 12-megapixel comparisons between the S20 Ultra, OnePlus 8 Pro (it wasn’t released yet when the S20 Ultra launched), and the iPhone 11 Pro. I didn’t even bother bringing my Pixel 4 out for the shootout because Google has discontinued it. As such, it’s out of the running.

Let's zoom in at 100 percent crop to see if we can see any differences in the details.

Here are some daylight close-up comparisons at 12-megapixels each.

Zoom in at 100 percent crop and you'll see that they're all pretty dang sharp.

Overall, the Note 20 Ultra has a solid camera system. Is it better than the iPhone 11 Pro? Not necessarily. Samsung's camera system still tends to saturate colors more, unnecessarily brighten scenes, and smooth out skin tones more than an iPhone. But the image quality is essentially the same as on the S20 Ultra for the most part.

The Galaxy Note’s battery life has always been a balancing act. I hope you can get a sense of what battery life is like based on my tested usage. For the most part, I averaged around 5 hours of screen-on time, which I think is good for a phone that’s doing so many things all the time.

What is a Note?

But you’re probably wondering a few things. First: why didn’t I say anything about performance? Because there's not much to say. The Note 20 Ultra has a Snapdragon 865+ chip, up to 12GB of RAM, and up to 512GB of storage (expandable via microSD), and it runs Android 10 with Samsung’s One UI 2.0. It runs exactly like the S20 Ultra — it’s smooth and responsive, but not as snappy as OxygenOS on a OnePlus 8 / 8 Pro.

And second: how do you skip the S Pen? It’s not that I wanted to gloss over the S Pen, but that there also isn't anything substantial to it. Samsung reduced the input lag to 9ms. That’s great I guess, but not once did I use the S Pen on the previous Note 10+ and think “this would be a game-changer if only the input lag was reduced.” The other improvements — better handwriting recognition and conversion-to-text, new Air Gestures, and Samsung Notes real-time syncing just don’t appeal to me much. I’m sure some people will find them useful, but I don’t think many people are dropping $1,300 for these minor upgrades.

Which brings me to the question I asked at the beginning: what is a Galaxy Note after nine generations? I asked Samsung and the company gave me the expected response that boils down to: the Note 20 Ultra is for people who like productivity; users who want the most powerful Samsung phone; and people who like having a stylus. So a niche user. Samsung also told me the Note 20 series is more appealing to people on older Notes like a Note 8 or 9 versus a Note 10. And with the up-front trade-in discounts Samsung is offering, getting the latest and greatest Note is more attractive. All valid explanations even if it doesn’t make for a juicy review.

So let me try to answer this question. To me, the Note has reached a ceiling. No doubt, the Note 20 Ultra is the best and most powerful Galaxy Note ever (get it if you want a Note), but looking at the bigger picture, it needs reinvention. When the S Pen and the gigantic-ness of the screen are no longer novel selling points, it means it’s time for a reboot.

The Galaxy Z Fold 2 is the perfect device to carry on the Note's legacy.

The craziest thing is Samsung already has the perfect device to carry on the Note torch: the Galaxy Z Fold 2. This foldable is the perfect device to carry on the Note’s legacy. Its foldable design is notebook-like in nature. And now that it has a more durable glass screen, all it really needs is an S Pen. How perfect would it be to have a Galaxy Fold with an S Pen? A device that lets you quickly take notes on the cover screen, but also unfold it to provide a larger display to write and draw on? It just seems like 1+1.

If the original justification for the S Pen on the very first Note was a big screen to write on, then the purpose of an S Pen moving forward should be the biggest phone screen available. And no single phone screen is larger than the Fold 2's foldable display.