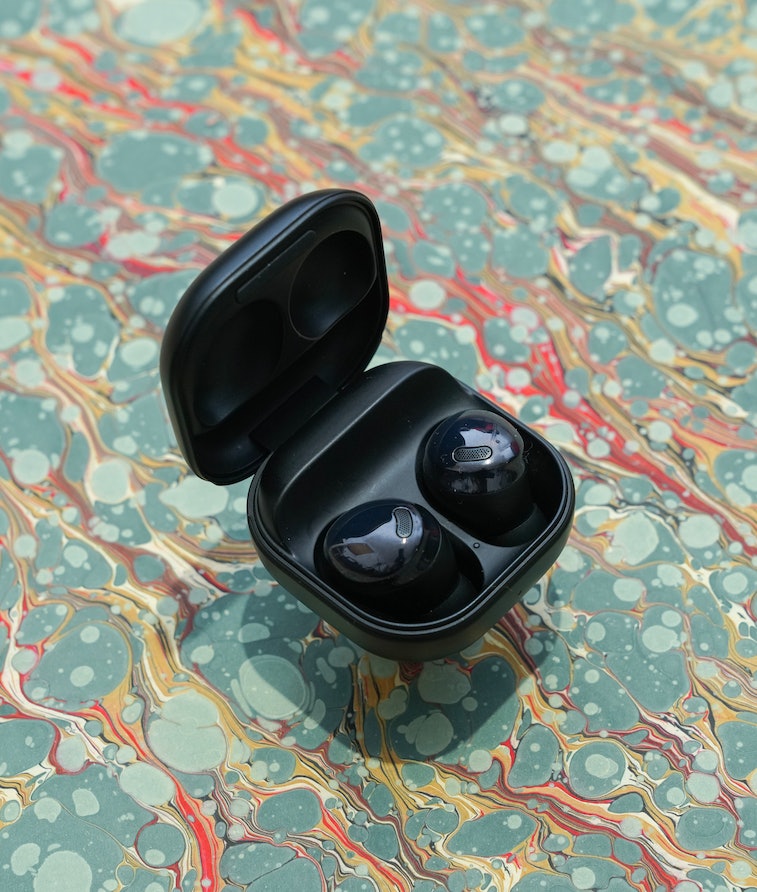 The FedEx delivery guy told me he buzzed the door at least a dozen times the day before when he attempted to make a delivery. I said I was home all day and didn’t hear my doorbell go off.

Turning the two locks on my door and redoing the chain (I live in NYC and this is totally normal I swear), I thought about how I could possibly have not heard the buzzer. Then, I remembered: I had Samsung’s Galaxy Buds Pro in my ears, active noise-cancellation turned on, and Migos thumping through my noggin non-stop all morning the day before.

Compared to AirPods Pro, the Galaxy Buds Pro sounds as good and often better when it comes to bass-heavy songs. I’ve loved my AirPods Pro since their release in 2019, but they’ve finally met their match. Besides superb sound quality, the Galaxy Buds Pro have touchpads for playback controls, longer battery life, and cost $50 less at $199.

I’ll go deeper into the Buds Pro’s various features like 360-degree audio in a second, but if you have no time to read more, here’s my one-sentence review: The Galaxy Buds Pro are the best overall value for active noise-cancellation wireless earbuds… for Android.

This is it, the Galaxy Buds’ final form. The Buds Pro splice together the Galaxy Buds+ and the Galaxy Buds Live into what I consider the best form factor and fit that Samsung’s ever designed for wireless earbuds. It took a couple of years for Samsung to get here, but we’re here now and I just love how the Buds Pro look and feel.

I’ve said this in almost all of my wireless earbuds reviews: The biggest turnoff for me is a bulky design and a chunky case. Brands have had years to miniaturize their components to better compete with AirPods and AirPods Pro. The Buds Pro finally deliver. Each earbud is compact and fits snuggly and deeply inside of my ears. Included in the box are two additional sizes of ear tips; there’s no ear tip fit test like there is with AirPods Pro so you’ll want to spend a few minutes trying on the ear tips in case your ears are asymmetric. The Buds Pro are also IPX7 water-resistant so feel free to go running in them and sweat as much as you want.

There’s a touchpad on each earbud with your standard controls: tap to play/pause, double tap to skip track or answer/end call, triple tap to go to the previous track, and a customizable touch-and-hold you can map to switch between ANC and ambient sound mode (default) or call up Bixby (heh) or adjust the volume. Nothing fancy. All of the controls are responsive and I’ve experienced no fiddliness with them.

Taking the buds out of the charging case, which by the way is compact and the same size as the one that comes with the Buds Live, can be fiddly. You kind of peel the buds off by digging your finger underneath the top of each bud and then you have to rotate them to get a proper hold before jamming them into your ears. I’ve reviewed a lot of wireless earbuds and these felt the slipperiest. It’s not a big deal and I quickly got used to them, but I thought you should know in case you have fat fingers because that might actually be an issue.

AirPods Pro have terrific sound. Apple’s audio team has spent the last several years tuning its sound signature to produce balanced songs. But ask anyone and they will tell you that though the bass can get loud without distortion, there’s a missing thump to it. You know that feeling when you’re standing at the front of the stage at a live concert and the bass is just rippling through your skin and bone? It’s a visceral feeling you hear and feel. The Galaxy Buds+ has this rich bass and so do the Galaxy Buds Pro.

No doubt the 11mm woofer and a 6.5mm tweeter in each bud are working overtime pumping out loud, clear sound. Now, the AirPods Pro still beats the Buds Pro when it comes to high volume/low distortion, but unless you’re looking for nuances, the Buds Pro sound damn great.

As for its ANC: It’s also very good. Like any wireless earbuds with ANC, the amount of noise blockage is not going to come close to what you get with over-ear ANC headphones that fully cover your ears. But for wireless buds this small, the Galaxy Buds Pro are right up there with the AirPods Pro, which reviewers unanimously agree have the best ANC in any wireless earbuds. My close listens with the volume set at 50 percent on both Buds Pro and AirPods Pro tell me Apple’s wireless earbuds block out more noise. It’s not by much, though. At louder volumes, it’s hard to hear anything happening around you with both earbuds on.

Ambient mode or Transparency as it’s called on AirPods Pro is a different story — at least with the default settings. There’s a discernible difference between the two filtered modes; AirPods Pro’s Transparency is clearer and sounds less fuzzy. Half the time I was never sure whether I had the Buds Pro on ANC or ambient mode; I’m never confused which mode I’m on with AirPods Pro. The good news is that you can turn up the ambient sound volume using the Galaxy Wearable app; the default “medium” setting is not enough and “high” makes the ambient mode closer to AirPods Pro’s Transparency. The “extra high” ambient sound volume pushes ambient mode to the extreme and you will definitely hear more background static and distortion so I wouldn't recommend it.

I recommend turning up the ambient sound setting from medium to high.Raymond Wong / Input
There are tons of settings within the Galaxy Wearable app on Android. Fewer settings for iOS.

There’s a wealth of settings within the Galaxy Wearable app such as an equalizer with different sound profile presets, a gaming mode for reducing audio latency, and more. You don’t get this with AirPods Pro. Also important to mention: Buds Pro can't connect with the iOS version of the app . Samsung has mysteriously dropped support for the app so you can't get any of the advanced settings. iPhone users: you’ve been warned.

The Buds Pro also supports 360 Audio with Dolby Head Tracking. This is clearly Samsung’s answer to Apple’s Spatial Audio feature that simulates surround sound on AirPods Pro. If you’ve never tried Spatial Audio with AirPods Pro (or AirPods Max) you really should because it’s really “orgasmic on the ears” as I said in my AirPods Max review. It feels like you're sitting in a movie theater with sound coming at you from all directions even as you move your head.

To enable 360 Audio with Galaxy Buds Pro, you first need to have a Galaxy device with One UI 3.1 or later; you won’t see the setting in the Wearable app (nor will you find a toggle for it the regular volume settings) if you’re on One UI 3.0. All three of the S21 phones ship with One UI 3.1. Then, once 360 Audio is on, you need to find content that supports it. With AirPods Pro, that’s easy: any 5.1, 7.1, or Dolby Atmos content in Apple’s TV app or Disney+ is automatically compatible. Netflix is reportedly testing spatial audio and other streaming apps are probably too. A show like The Mandalorian on Disney+ is a terrific way to experience Spatial Audio.

I assumed the same for 360 Audio but I was wrong. Re-watching the epic season 2 finale of The Mandalorian, I could hear no difference with 360 Audio on and off. So I asked Samsung to point me to some content to test 360 Audio. But even they didn’t have a list ready; a spokesperson vaguely suggested the latest Avengers trailers on YouTube. And so I loaoed them up and, not for nothing, but I didn’t hear a difference; stereo and 360 Audio sounded the same. I’ve reached out to Samsung to get clarity on what I’ve been experiencing.

Microphone quality is also excellent. Each bud has two outer mics and one inner mic that works together with a Voice Pickup Unit (VPU) to boost voice clarity and reduce background noise. I used the Buds Pro to take Zoom and Microsoft Teams video calls with my PC and M1 MacBook Air, regular and FaceTime calls with my iPhone 12 Pro, and Zoom and Slack calls with several Android phones and was told I sounded great.

Of Samsung’s three Galaxy Buds, the Buds Pro have the weakest battery life: up to 5 hours with ANC with an additional 13 hours in the case. Disable ANC and battery life jumps up to 8 hours of listening time with an additional 20 hours in the charging case. The ANC rating, which I can confirm is what you’ll get on a single charge, just narrowly beats the AirPods Pro, which can only last up about 4.5 hours with ANC on; with ANC turned off the Buds Pro wallop the AirPods Pro’s 5 hours of battery.

With ANC turned off the Buds Pro wallop the AirPods Pro battery.

The only wireless earbuds that I’m aware of with longer battery life are Sony’s WF-1000XM3, which get up to 6 hours with ANC and the Jabra Elite 85t, which last up to 5.5 hours with ANC. Neither are even comparable in my opinion since Sony’s charging case is ginormous and the Elite 85t looks so corporate.

In a perfect world, the Buds Pro would get the same 11-hour battery life as the Buds+. But ANC always comes at the expense of battery life. Until there’s a breakthrough in power efficiency, I’m going to declare the Buds Pro’s battery life a victory over the AirPods Pro.

At the end of every day that I’ve been testing Galaxy Buds Pro: I’ve thought to myself “Damn, these sound good. And they’re only $200?” After the different but ultimately disappointing ANC in the Buds Live, it’s nice to see Samsung rebound with a pair of proper ANC wireless earbuds that get dangerously close to replacing my AirPods Pro.

If you’ve got a Samsung or other Android phone, the Galaxy Buds Pro are at the top of my wireless earbuds list. They look the best, sound fantastic, and undercut much of the ANC earbuds competition. The Galaxy Buds + and its really good passive noise-cancellation, 11-hour battery, bassy- sound, and $150 price (regularly on sale for even less) are still the best wireless earbuds value, but for ANC buds, the Buds Pro offers a ton of bang for the buck.