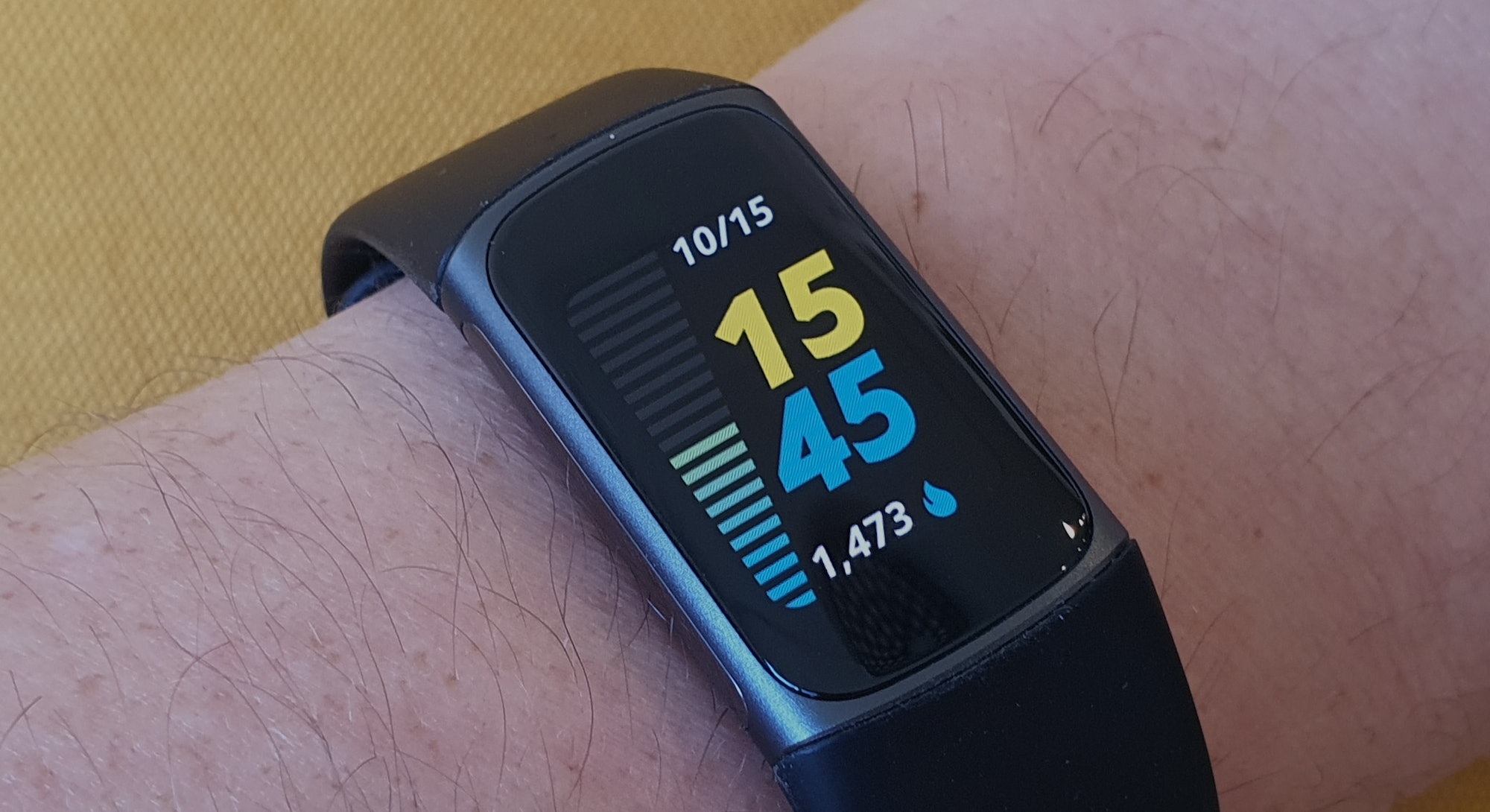 When Google bought Fitbit, there were some fears it would be mined for its IP and user data and left to atrophy.

Thankfully, that hasn’t happened. Fitbit keeps releasing new devices, and Google keeps claiming it won’t use the trove of health data it got in the deal to serve us ads. So far, so good.

Neither Fitbit nor Google have ever proven themselves adept at making smartwatches, but Fitbit sure knows its way around a fitness tracker. Fitbit’s latest, the $179.99 Charge 5, embodies many of the steps the company has taken since its first wrist-worn tracker, the Fitbit Flex, in 2013.

But while the Charge 5 gets some new features never seen on a Charge device before, it also frustratingly loses some old favorites.

Fitbit's latest tracker includes a color display and new sensors to keep you on top of your heart health.

Like the recent Luxe, the Charge 5 gets a color display. Though larger than the Luxe’s, the Charge 5’s display also doesn’t extend to the edge of its glass cover. And like the Luxe, it doesn’t add much in terms of functionality. Sure, it looks a little more visually appealing than the monochrome Charge screens of old, but it doesn’t offer any new must-have features either.

It’s not like you’re going to be looking at pictures on the Charge 5 or scrolling through a slew of apps where color can help you pick out the one you want. In the end, color is a nice-to-have, but hardly a reason to choose the Charge 5 specifically.

Fitbit’s also introduced an always-on option for the Charge 5, but it’s flawed. First, it’s pretty dim, even with the battery-sapping brightness (which it warns you about) cranked up. Second, if you’ve got auto-wake turned off (the feature that wakes the device when you lift your wrist), it looks like the display is on when you look at it, but it isn’t. To do anything, you have to double-tap to wake it, but that doesn’t change anything on the screen, so it adds another step and is a little counterintuitive.

Assuming you set auto-wake to “on” to get around this and choose the always-on display, you then cut the average battery life from seven days to around two. To my mind, part of a Fitbit’s charm is not having to charge it more than once or twice a week, so I soon reverted to letting the display turn off after a few seconds.

The other feature Fitbit’s raving about on the Charge 5 is its heart-health-focused features. These include new sensor strips on either side that enable electrodermal activity sensor (EDA) scans and the promise that the device will be able to perform ECGs down the road. The EDA scan claims to be a measure of stress; it requires you to hold the device’s edges between thumb and forefinger for three minutes while you sit still and try to follow on-screen breathing prompts.

The EDA doesn’t provide helpful metrics beyond telling you how you fared compared to your previous tests. And sitting still for three minutes, clasping the edge of your Fitbit, isn’t exactly relaxing. Perhaps this is a feature some users will value, or maybe it’ll improve over time. But as it stands, it’s not very useful.

As for the promised ECG readings, I have to wonder how long it’ll take for Fitbit to actually add it; the Apple Watch has supported ECG readings since the Series 4 came out in 2018. After all, Fitbit let multiple generations of wearables roll out with SpO2 sensors before it actually began harnessing them. Still, the feature is doubtless coming, but if it’s the reason you want a wearable, you should perhaps look elsewhere.

Fitbit Pay is standard now, rather than only being offered with “special edition” Charge models, and that’s the one instance where I’ve found the color display handy: recognizing which card I’m using on my Fitbit at a glance. Though, as most of my cards are blue, it’s really the bigger, sharper display that’s doing most of the assisting, I suspect.

One thing you’ve never had to spring for in a non-standard edition is Fitbit's sleep tracking and multi-day battery life — both remain excellent here. In the first week of use, I got six days of battery life, and that included three 30-minute runs tracked using the Charge 5's onboard GPS. In the following three weeks, I averaged a charge once every five or six days, except when I left the always-on display running.

Fitbit's figures [from a tracked run] made for a more flattering story.

Sleep tracking, meanwhile, remains automatic as it has been for years, and Fitbit offers increasingly detailed insights into various sleep stages, along with an alarm that can wake you between sleep cycles. The SpO2 pulse oximeter sensor (also available on the Ionic, Versa, and Charge 3 and 4) provides further insights into whether or not your night was a restless one.

A word on the GPS: I tracked the same runs with a smartphone, and Fitbit was generally more generous with its distance measurements. Now, I can’t say which is more accurate, only that the disparities were significant (10 percent or more), and of course, the Fitbit’s figures made for a more flattering story. At least, sometimes. Other times, the auto-tracking in the Fitbit app itself would be wildly off compared to the deliberate tracking initiated on the Charge 5 when heading out.

If you’re a serious athlete, you’ll probably want more control over which metrics your wearable displays during workouts... and physical buttons. Trying to tap through on-screen info without breaking pace is hard with the Charge 5.

Nike Run Club on my phone recorded a distance of 4.1km.
Fitbit recorded 4.59km by itself, but only 3.9km when I physically initiated tracking on the wearable itself.

Fitbit also promises to add customized training suggestions down the line based on users’ metrics and is continually bolstering its catalog of guided workout videos. It’s also got a “daily readiness score” in the works that’ll let you know whether to train hard or take it easy on a particular day. To access these, you need Fitbit Premium, six months of which comes free with the Charge 5. After that freebie, there’s a monthly subscription of $9.99 (or $79.99 annually).

The guided workouts catalog isn’t enormous yet, but the production value is high and there’s a good selection of workouts for newcomers and experienced users alike.

Adding workout plans and personalizing them was an obvious progression for Fitbit. Now it’s a question of whether its execution will be good enough to keep newcomers paying when their trial runs out, or convert others from Apple Fitness+, Peloton, or other rival services.

Like the Luxe, the Charge 5 has no physical buttons at all. And like the Luxe, that can be super frustrating. It’s all too easy to get stuck trying to swipe your way out of menus. A double-tap always takes you back to the home screen, but that’s not the ideal solution if you’re three menu layers deep and merely want to step back one.

Then there’s the supplied strap. It relies on aligning the appropriate strap hole with a plastic rivet and then tucking the leftover portion back through the strap and under it. It’s vexing to put on, especially if you’ve just gotten out of the shower. In short: it sucks. Of course, it’s swappable, and Fitbit offers alternatives (as do plenty of third parties).

There also is no weather app or ability to control Spotify, but in Fitbit’s defense, those aren’t likely features many users actually use.

The final omission is one many users likely won’t notice: the altimeter. The fact they won’t notice is probably why it’s been omitted in the first place. I suppose GPS means you’ll still get elevation details from outdoor workouts, and most people don’t care how many flights of stairs they climb in a day. But I miss it, nonetheless.

If you really want a color display and won’t miss a physical button, at least get a different strap when you order the Charge 5. But if you’ve got a Charge 3 or 4 that’s still working, and you don’t need Fitbit Pay, I’d probably wait for the Charge 6 (or whatever it ends up being called).

There’s nothing wrong with the Charge 5, per se, but many of the features it’s trying to use to win over buyers or get existing fans to upgrade don’t actually work yet. And there’s no standout feature that puts it far enough ahead of the Charge 4.