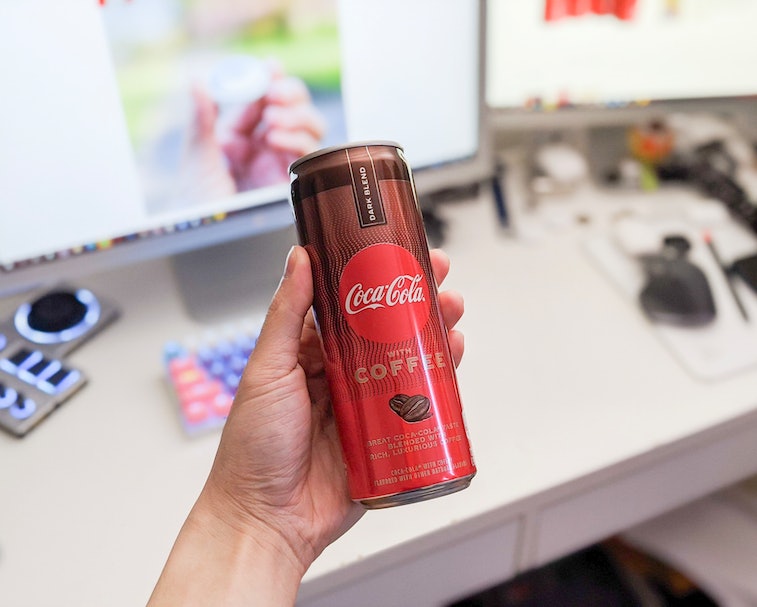 My friends don’t believe me, but I make them feel foolish every time they dare put me through the Pepsi challenge. Any Coca-Cola connoisseur like myself can taste the distinct difference between The One True Cola and Pepsi. One tastes like a refined drug, the other is just brown carbonated sugar water. Don’t even get me started on why Coca-Cola that comes in a glass bottle (sold as “Mexican Coke” here in the U.S.) is superior to Coke in a can or plastic bottle. I will argue until your mouth hurts.

Recently, I have been downing a few too many cans of Coca-Cola with Coffee. This exotic mix of cola and coffee is not new. About half a lifetime ago (for me at least), Coca-Cola released Coca-Cola Blāk, but it was discontinued only two years later. In 2017, Coca-Cola with Coffee launched in Australia — I totally forgot that I got my first sip in Japan that same year — and I never heard about it ever again.

A few weeks ago, I was at my local Asian supermarket (superior to American supermarkets in every conceivable way IMO) and there on the shelf was a 4-pack of Coca-Cola with Coffee. Now, $7 is a lot of money for four 12-ounce cans of soda — it’s a terrible value compared to the bulk, mega-sized 2-liter+ bottles you can buy at Target. But like I said, I’m a man of fine Coca-Cola so I splurged.

That was a big mistake.

Because the first 4-pack turned into a second 4-pack the following week, and then two more four-packs (one with Vanilla blend), and now not only am I addicted to them like Fry guzzling Slurm, but I’ve got my sisters and friends hooked on them. I am so sorry guys.

Not a mistake is the taste. The regular Dark Blend is a combination of Coca-Cola with a kick of black coffee. Whereas Coca-Cola Blāk was good but smelled like some funky Chinese herbal medicine (you never forget that stuff), this new Coca-Cola with Coffee really tastes like a shot of espresso dropped into a glass of Coke. It is my new caffeinated and non-alcoholic alternative to sake and soju bombs that I, unfortunately, am not able to partake in at bars these days.

There’s a “zero sugar” version, but unless you get a note from your doctor... that’s weaksauce. Drink water if you can’t handle sugar.

When I told my coworkers about my newfound addiction, I was informed people in Europe — specifically Italy — have been mixing Coca-Cola and real coffee for an eternity to great results that may or may not twist your brain for better or worse. Of course, they have — those classy bastards.

In moderation, there is no non-alcoholic beverage that gives me this kind of buzz.

I am way too afraid of mixing two highly caffeinated beverages together for fear it’ll be more potent than this pre-made concoction. One day, though! Maybe when I’ve hit rock bottom and need to pull myself up in this apathetic world.

For me, Coca-Cola with Coffee once or twice a week is the high-flying rush that I used to get from chugging a Red Bull. I mean, I’m pretty proud of all the reviews we’ve published in April and that is partially thanks to this drink running through my veins at ungodly hours. Okay, maybe don’t be like me because I’m sure my doctor would yell at me. In moderation, though, there is no non-alcoholic beverage that gives me this kind of buzz. The only problem I have is that I can’t find the Caramel-flavored one in stores. I’m this close to just ordering it off Amazon, but I’m trying really hard not to.