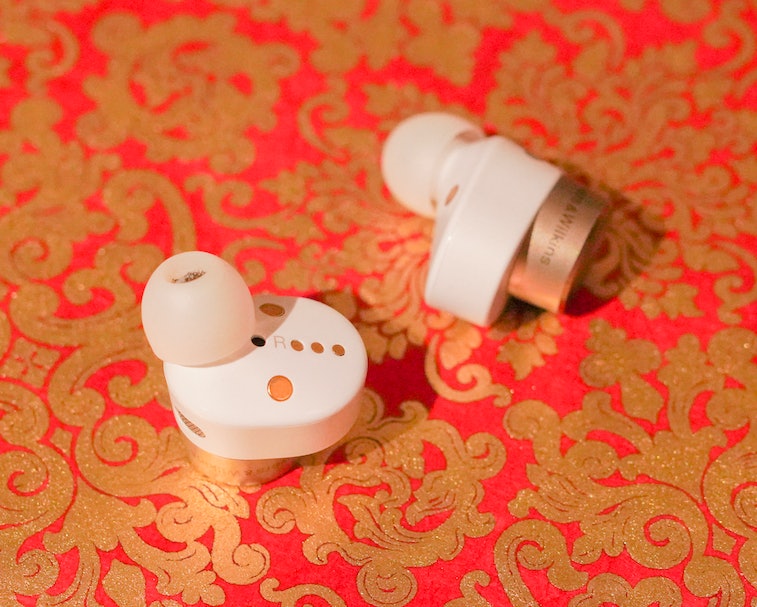 Wireless earbuds are great, except for one thing: They don't work when you're on a plane for watching the free movies provided by in-flight entertainment.

There are workarounds like buying a Bluetooth transmitter that essentially plugs into the two-prong 3.5mm jacks usually located in your seat's armrest. I've tested the RHA Wireless Flight Adapter with mixed results and it appears it's no longer sold, though you can still find it from unofficial retailers. I've also heard good things about Twelve South's AirFly Pro ($45). There are also numerous cheapo versions on Amazon that solve the same problem, but I can't vouch for how well they work.

So your options are really: Get a dongle or bring a pair of wired earbuds with you when you fly. (Some airlines like JetBlue still hand out disposable wired earbuds.) That's why I was so stoked to see a company actually try to solve this annoyance. That company is Bowers & Wilkins and the product is the PI7 wireless earbuds.

For the hefty price of $399.99, the PI7 comes with a clever feature that lets you use them with any in-flight entertainment system. Just connect the included USB-C-to-3.5mm cable to the charging case and then plug the 3.5mm end to the in-flight audio jack and the wireless earbuds automatically work. That's it.

The Bowers & Wilkins PI7 are the easiest wireless earbuds for watching movies on a plane's in-flight entertainment system.

I used the PI7 on two cross-country flights while on vacation a few weeks back and unlike the RHA Wireless Flight Adapter, I had zero issues with pairing. My gripe with the RHA Wireless Flight Adapter (and other similar dongles) is that it pairs with the nearest Bluetooth device. On a plane filled with people wearing Bluetooth headphones or earbuds, I never could guarantee a perfect connection. Sometimes it'd pair my AirPods or Galaxy Buds and sometimes it wouldn't. The PI7 have no such problem because the case acts as a transmitter that only pairs to the buds it comes with.

I was concerned about interference and audio latency which would put the earbuds out of sync with in-flight content, but was happy to discover none at all. I watched Joker on my flight and the sound didn’t drop once.

By itself, this feature alone isn't enough to justify spending $400 on wireless earbuds. Fortunately, it's just one of several solid features. Sound quality on the wireless earbuds is really good. It's able to produce strong and clear bass, and above-average mids and highs. I would have been more surprised had Bowers & Wilkins, a well-known audio company, dropped the ball on sound. It's good that they didn't.

The PI7 supports active noise cancellation — for $400 they had better! It's good, but I wouldn't say it's best-in-class. The ANC on Sony's WF-1000XM4 blows the ANC on the PI7 out of the water with more sound blockage. And AirPods Pro and Galaxy Buds Pro just block out more external noise than the PI7, too.

Crank the volume up on a plane, though, and you'll find the PI7 perfectly suitable for drowning out the baby crying a few aisles back or even the flight attendant asking you if you want a beverage. I think I would have gone mad on the 6-hour flight from San Francisco back home to New York City if I didn't have the PI7 buds in my ears to block the one baby that wouldn't stop crying. (For some reason, there's always a crying baby on cross-country flights. Always.) There's an ambient/transparency mode just like on other wireless earbuds, but it's really not good. Bowers & Wilkins has an app that lets you adjust the transparency, but it's very limited.

Though I found the PI7 buds to be comfortable for hours of wear, the buds and case aren't exactly compact. While nowhere near as large as the comically huge Sony WF-1000XM3 or Beats Powerbeats Pro earbuds case, the PI7 case is about one-third larger than an AirPods Pro case which is considered the standard for reasonable size. I get that there's a transmitter inside the PI7 case, but then, if it's gonna be large, why not put in a larger battery? With the case, the PI7 only has enough battery for 20 hours of listening time compared to 24 hours on the AirPods Pro, 36 hours on the Sony WF-1000XM4, and 42 hours on the Master & Dynamic MW08. Feels like a real missed opportunity for $400 buds.

It's not good for the earbuds, either. The somewhat large earbuds get around 4 hours of listening time with ANC turned on, which is 30 minutes less than AirPods Pro and 1 hour less than Galaxy Buds Pro, Galaxy Buds 2, and Amazon Echo Buds 2. And compared to the 8 hours of ANC on Sony's WF-1000XM4, the PI7 battery's battery life is disappointing.

Lastly, the microphones on the PI7 are average at best. Sometimes, my voice came through fine on Zooms, FaceTimes, and regular phone calls. Other times, the person or people on the other end cringed at my muffled and distorted voice.

If not for the Bluetooth transmitter that allows the wireless earbuds to work seamlessly with in-flight entertainment systems, the PI7 buds would have little to stand on besides sound quality. Which for $400, still wouldn’t be the best. If you don't need the transmitter, which also works with devices like the Nintendo Switch that somehow don't support Bluetooth (though I noticed a little lag for some games), Bowers & Wilkins makes the PI5, which I also tested. The PI5 are $250; they get up to 24.5 hours of battery; and the ANC and sound quality is virtually identical to the Pi7.

Do I like the PI7 just for the transmitter? You bet I do. I wish all wireless earbuds came with one built into the case. If you fly often (or plan to again) and want the convenience of wireless earbuds that work with in-flight entertainment systems, there are no others like the PI7. You 100 percent pay a premium for the feature. Or just wait for them to go on sale. The holiday deals are right around the corner.