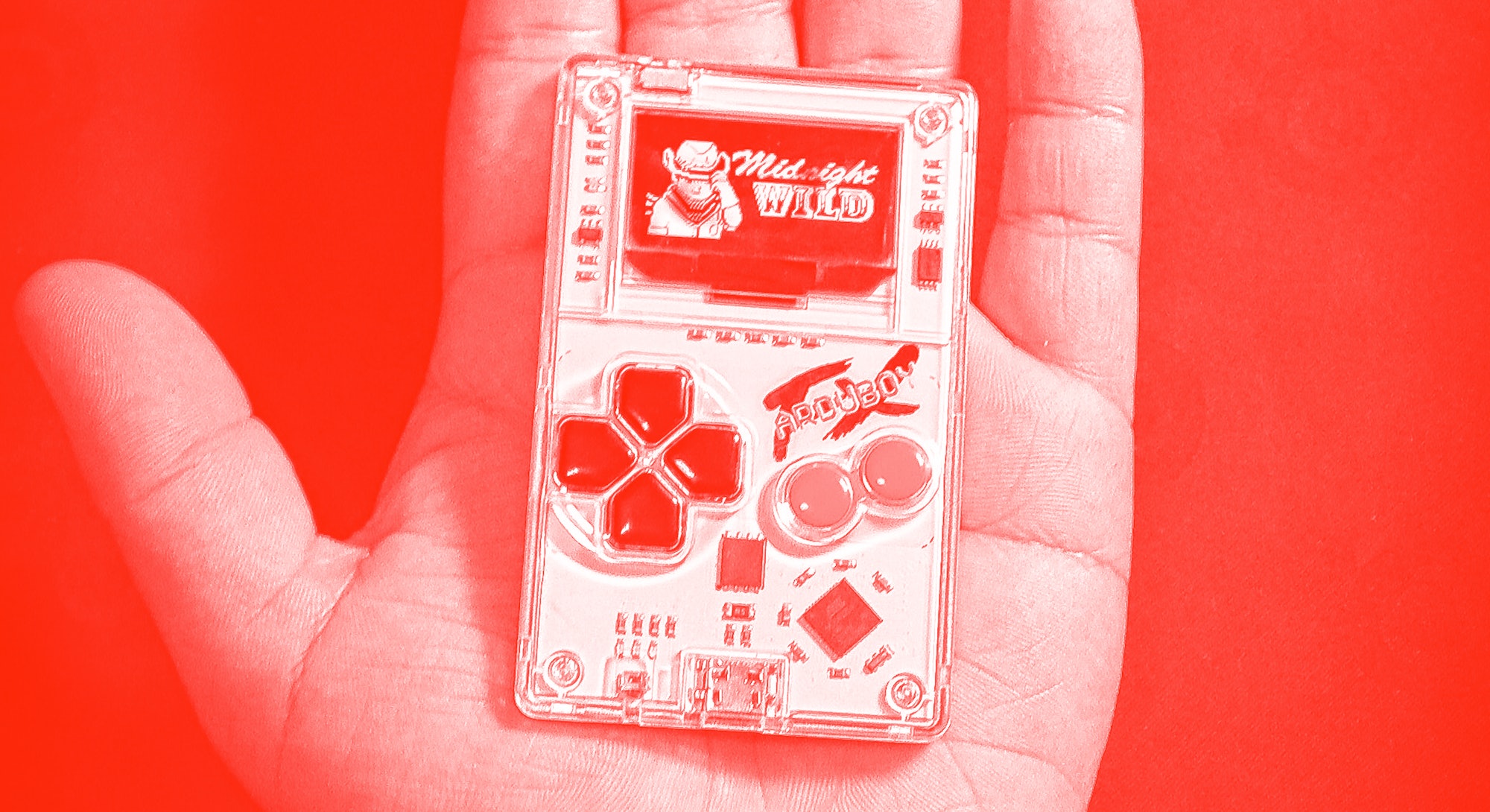 A gaming handheld that fits inside a wallet has no business being any good. Yet, the 8-bit Arduboy FX has surprised me at every turn, delivering bite-sized games that, though limited, are surprisingly fun with more depth than you might expect.

The Arduboy FX is the follow-up to the original credit card-sized Arduboy that launched in 2015 as part of a Kickstarter campaign. The new model looks nearly identical, except it can now store over 200 games instead of just one. The FX stands for “Flash eXpansion,” which is a reference to its flash storage. The first Arduboy could only store one game at a time, a shortcoming that was a major turnoff.

The first batch of Arduboy FX handhelds are currently sold out and pre-orders for the second batch don’t ship until September. But don’t be surprised if they’re delayed like the first batch. (You can find a list of third-party sellers on the Arduboy site.)

Trying to play all 200 games has been the best kind of burden.

Three months after waiting for the Arduboy FX to arrive, I’ve now spent a solid week trying out all the included games. Trying to play all 200 games has been the best kind of burden, and while I haven’t picked a favorite yet, I definitely have a top 10 at this point. I’ve also done a few coding lessons, which are easy to follow even for a beginner like me. Long story short: the $54 was totally worth it. It’s no Playdate and its quirky hand crank, but its low-res appeal is just as fun.

As someone who grew up owning only a handful of games and having limited access to computers, I wish I had this handheld as a boy. Now, as an adult, I find the Arduboy FX to be the rare gadget that both satisfies my want for entertainment and my need to learn. I’ve enjoyed my time with the many handcrafted games so far but, now that I’ve got some coding basics down, the thing I’m looking forward to most one day is developing my own.

Solid build on a budget

The new Arduboy FX is a lot like the old one. Same white PCB, same signature red buttons, and same tiny screen with sharp, bright pixels. Not much has changed, and that’s because the original design still holds up well. It powers on the moment you flick the switch. I’m so used to waiting for an OS to load or an update to download and install and not having to do so has been outright refreshing.

Powering it on for the first time, I was taken aback by the sharpness of the bright monochrome screen. That’s because it’s an OLED Dot Matrix display with a resolution of 128 x 64 pixels. The screen is about as big as two postage stamps side-by-side, but everything, from the text to the character sprites, is surprisingly sharp. It’s clearly visible in bright daylight, but it’s not so bright as to hurt your eyes at night — there is no way to control brightness. This is all powered by a 180 mAh rechargeable battery that lasts around 8 hours, the Arduboy page claims. I estimate I got around 5-6 hours of playtime on and off, but I didn’t keep close track. There’s no battery indicator to show when power is low and when the Arduboy FX is dead, it just shuts down without warning.

The buttons feel snappy and make a satisfying, audible clicking sound when pressed; they’re not mushy like Game Boy buttons. Also making noise is the piezo speaker, which is used sparingly across most games mostly for beeps and also some bloops. There are LEDs on the device as well, and these are mostly activated when loading up a game.

As you can tell by now, the Arduboy FX is not a complicated gadget. You can open it up with a Phillips screwdriver and see the guts yourself. Unlike my other handhelds, some of which are 20 years or older, that can be expensive and hard to replace, the Arduboy FX is relatively inexpensive. It’s this simplicity that calls me to it.

The first Arduboy helped pioneer play-and-code handhelds, but its one game storage left a lot to be desired. The Arduboy FX both improves and stays true to the original with storage for 200 games. The games on the Arduboy FX are split into 12 categories, including one category for apps and another for music. You can view the full list of games and even play them via your browser here.

To be clear: these games aren’t going to compete with anything that’s come out in the last 20 years. It’s fairer to compare the device to the original Game Boy. However, with the leaps in game design since the Game Boy first launched, creators have squeezed every ounce of computing power out of the 8-bit machine.

Most of the games on the Arduboy FX are inspired by classics like Castle Boy (Castlevania), Omega Horizon (Metroid), and Micro City (SimCity). I’ve been hooked to the short, yet addicting, build -and-make-money loop of Micro City, and it’s wild that the developers were able to fit a fully functional, albeit limited, city building simulator. In the RPG section, games such as Ardynia (The legend of Zelda) and Arduventure (Pokémon) riff on game design that was popular 30 years ago while still staying true to the look and feel of the 8-bit era. Other games push the device to its extreme. Catacombs of the Damned is a 3D dungeon crawler/first-person shooter that is very clearly inspired by id Software's Wolfenstein 3D. While it draws from the classic shooter, making a game like that on an 8-bit system is a feat worthy of praise. Ard Drivin can be compared to Sega’s Outrun, with impressive sprite-scaling and super-fast gameplay that runs smoothly on the small screen.

While a vast majority of the games are heavily inspired by what’s come before, there are Arduboy originals worth checking out, too. Circuit Dude by Jonathan Holmes aka Crait is an addictive puzzle game that was so successful on the platform that it was ported to other systems including the Nintendo Switch. Another one of Crait’s games, platformer Midnight Wild, stars a whip-wielding cowboy and has some of the best sprite work on the system. Team A.R.G, a developing group that seems to have disbanded, put out some of the best gems on the system, such as the top-down zombie shooter Virus LQP-79, the mermaid-themed shoot ‘em up Sirene, and the previously mentioned Arduventure.

The Arduboy FX is not lacking great games. Even after spending a week playing it as much as I could on work breaks and between episodes of TV, I feel like I’ve barely scratched the surface. Not that I’m complaining, though. The beauty of the Arduboy FX is that when the included games inevitably become boring, there’s plenty of new ones to discover on forums and on GitHub. And if those aren’t enough, I can make my own games.

Making my own games

The Arduboy FX’s other main attraction is that it’s also a device for learning to code. Arduboy is a portmanteau of Arduino and Game Boy. The device runs on an ATmega32u4 microcontroller chip, which powers Arduino boards such as the Arduino Micro. It’s not powerful by any means, but the tiny 8-bit microcontroller can do wonders in the right hands. Using the Arduboy FX for coding projects is not necessary to enjoy the device, but it’s half the reason for owning one.

To get started, you can visit the learning page on Arduboy’s site or jump straight into the first lesson, which covers everything you need to get started. You’ll be instructed to download the Arduino IDE and several libraries before you can start coding, but all of that is free and runs on basically any computer from Windows to Macs to Chromebooks and Raspberry Pis. The programming language used is C++, which is a good place to start if you have little coding experience like me. Not counting the HTML and CSS class I took in college, I don’t know how to code. I’ve tried online courses and books, but none have stuck. My problem is that it’s hard to learn when I can’t put what I’ve learned into practice.

But with an end goal to create my own game, I feel like coding might stick this time. I’m slowly making progress and I’m seeing the fruits of my labor on the screen in a short amount of time. Bugs are frustrating, but I love the rush of excitement from finding and fixing an error that’s been preventing code from compiling. Most of the compiling only takes a few seconds so it doesn’t take too long to squash wrong code. If I’m nitpicking: the Micro-USB cable the Arduboy FX comes with is only a few inches long. Get a longer one or coding is gonna be hard if your USB port is out of reach.

My goal is to make a game, even if it’s just for me to play.

I’ve been following along to nine-part “Make Your Own Arduboy Game” lessons. The lessons are written by Circuit Dude’s Crait, who lays out each tutorial in simple terms, adding new concepts to the mix at a steady, but not overwhelming, rate. I’m up to the fifth lesson, having learned how to print text, run loops, and how to connect button presses to actions. I built a number guessing game by following the instructions. There are still more lessons to learn from, and the forums are full of wisdom and tricks I can’t wait to dive into. Although what I’ve done is very basic at this point, I’m into it so far, and I’m planning to stick with it, especially with the community being so welcoming and responsive. My goal is to make a game, even if it’s just for me to play. If anything, I’m salty I didn’t have this when I was 10, as it may have changed my career trajectory. Kids these days are truly so lucky.

I’ve always been fond of the maker community — the programmers, engineers, and tinkerers who make gadgets and tools out of spare parts and tiny computers. Kevin Bates, the creator of the Arduboy, is a well-known name in the maker community. He created the first Arduboy as a digital business card, but it wasn’t until a video in 2014 of him playing Tetris on the device that set off a demand for the product. Bates later quit his job and started a Kickstarter campaign in 2015 that would go on to raise $400,000, far surpassing its original goal of $25,000.

As soon as the first Arduboy arrived, the community went to work, later producing increasingly complex games such as Arduventure, Mystic Balloon, The Curse of Astarok, Ardynia, and many more. The problem was that it couldn’t hold more than one game at a time, which greatly limited its functionality and value. The Arduboy FX fixes that key flaw. I’ve kept an eye on the Arduboy over the years and always thought it was a gimmick. While it’s no Game Boy, it’s definitely an entertaining little toy that’s also a fun way to learn coding basics. If you’ve got even an ounce of interest in old-school gaming or coding, the Arduboy FX brings just enough to the table to tickle them.

The Arduboy FX is a credit card-sized handheld with 200 included games and after they get old, you can code your own.